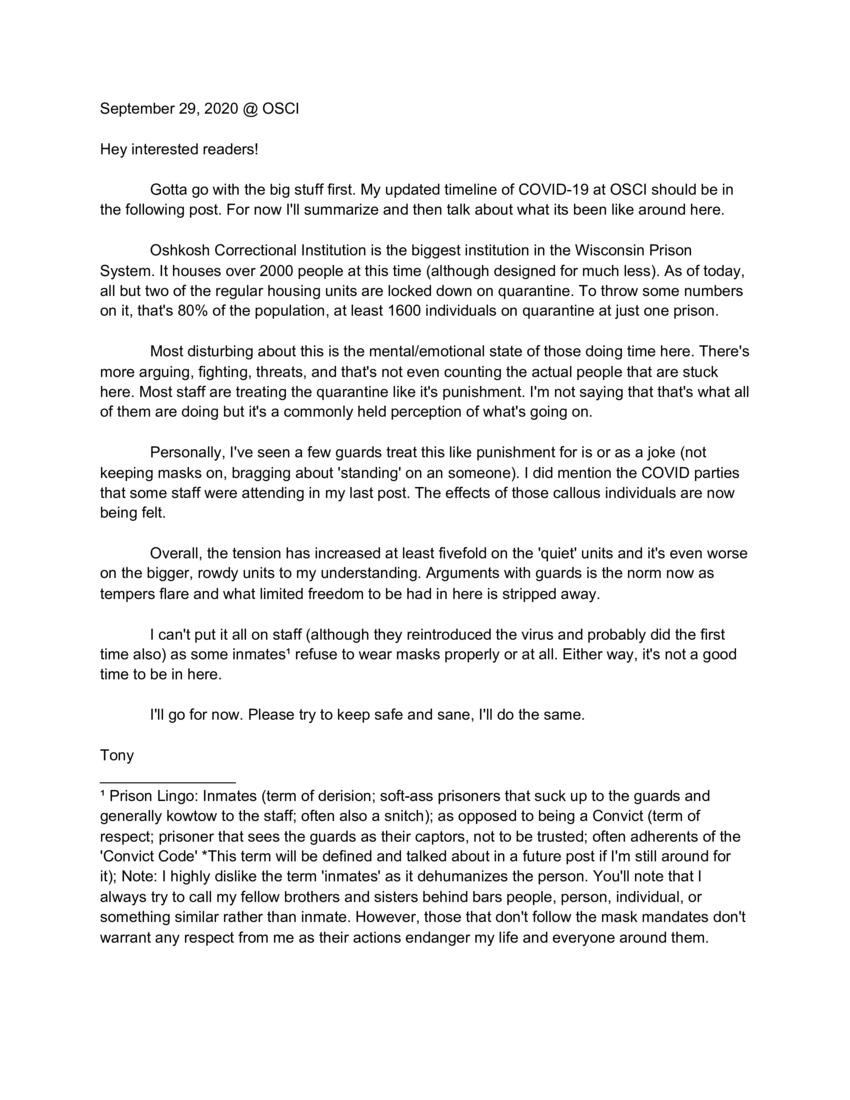 Gotta go with the big stuff first. My updated timeline of COVID-19 at OSCI should be in the following post. For now I'll summarize and then talk about what its been like around here.

Oshkosh Correctional Institution is the biggest institution in the Wisconsin Prison System. It houses over 2000 people at this time (although designed for much less). As of today, all but two of the regular housing units are locked down on the quarantine. To throw some numbers on it, that's 80% of the population, at least 1600 individuals on quarantine at just one prison.

Most disturbing about this is the mental/emotional state of those doing time here. There's more arguing, fighting, threats, and that's not even counting that actual people that are stuck here. Most staff are treating the quarantine like it's punishment. I'm not saying that that's what all of them are doing but it's a commonly held perception of what's going on.

Personally, I've seen a few guards treat this like punishment for is or as a joke (not keeping masks on, bragging about 'standing' on an someone). I did mention the COVID parties that some staff were attending in my last post. the effects of those callous individuals are now being felt.

Overall, the tension has increased at least fivefold on the 'quiet' units and its even worse on the bigger, rowdy units to my understanding. Argument with guards is the norm now as tempers flare and what limited freedom to be had in here is stripped away.

I can't put it all on staff (although they reintroduced the virus and probably did the first time also) as some inmates^1 refuse to wear masks properly or at all. Either way, it's not a good time to be in here.

I'll go for now. Please try to keep safe and sane, I'll do the same.

___________________
^1 Prison Lingo: Inmates (term of derision; soft-ass prisoners that suck up to the guards and generally kowtow to the staff; often also a snitch); as opposed to being a Convict (term of respect; prisoner that sees the guards as their captors, not to be trusted; often adherents of the 'Convict Code' ^*This term will be defined and talked about in a future post if I'm still around for it); Note: I highly dislike the term 'inmates' as it dehumanizes the person. You'll note that I always try to call my feellow brothers and sisters behind bars people, person, individual, or something similar rather than inmate. However, those that don't follow the mask mandates don't warrant any respect from me as their actions endanger my life and everyone around them.