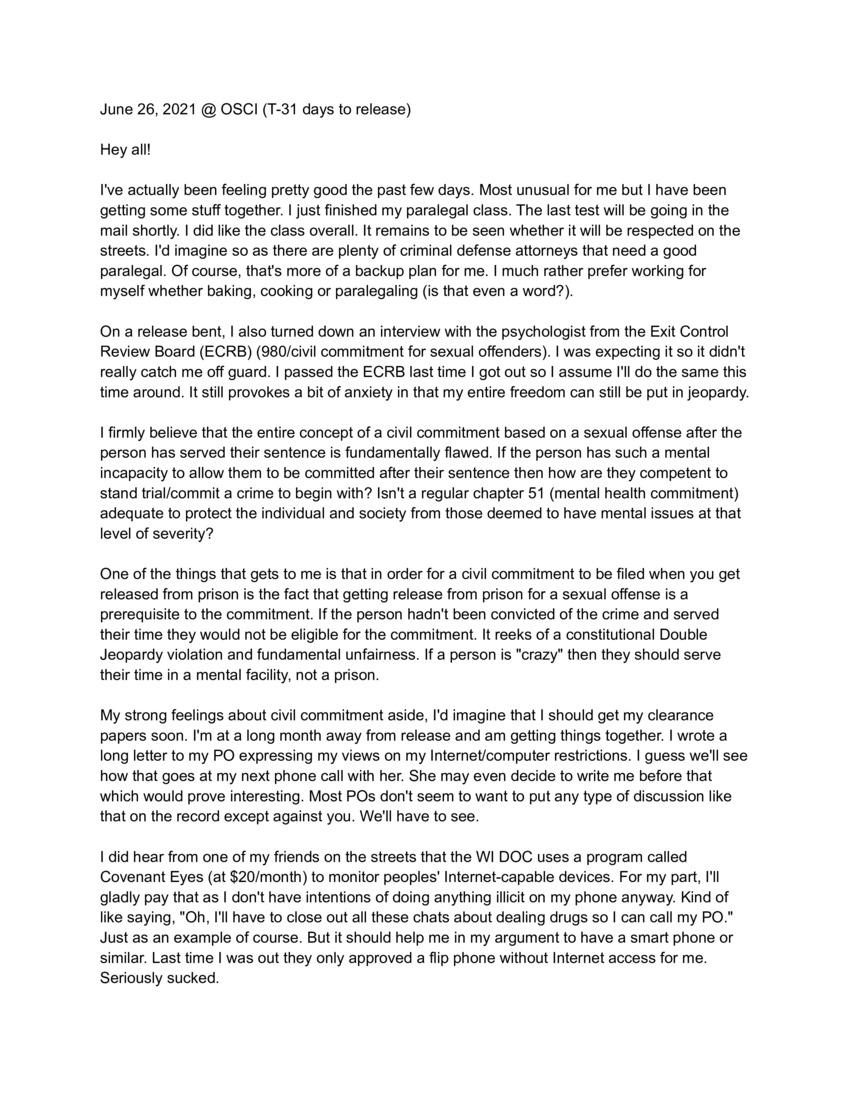 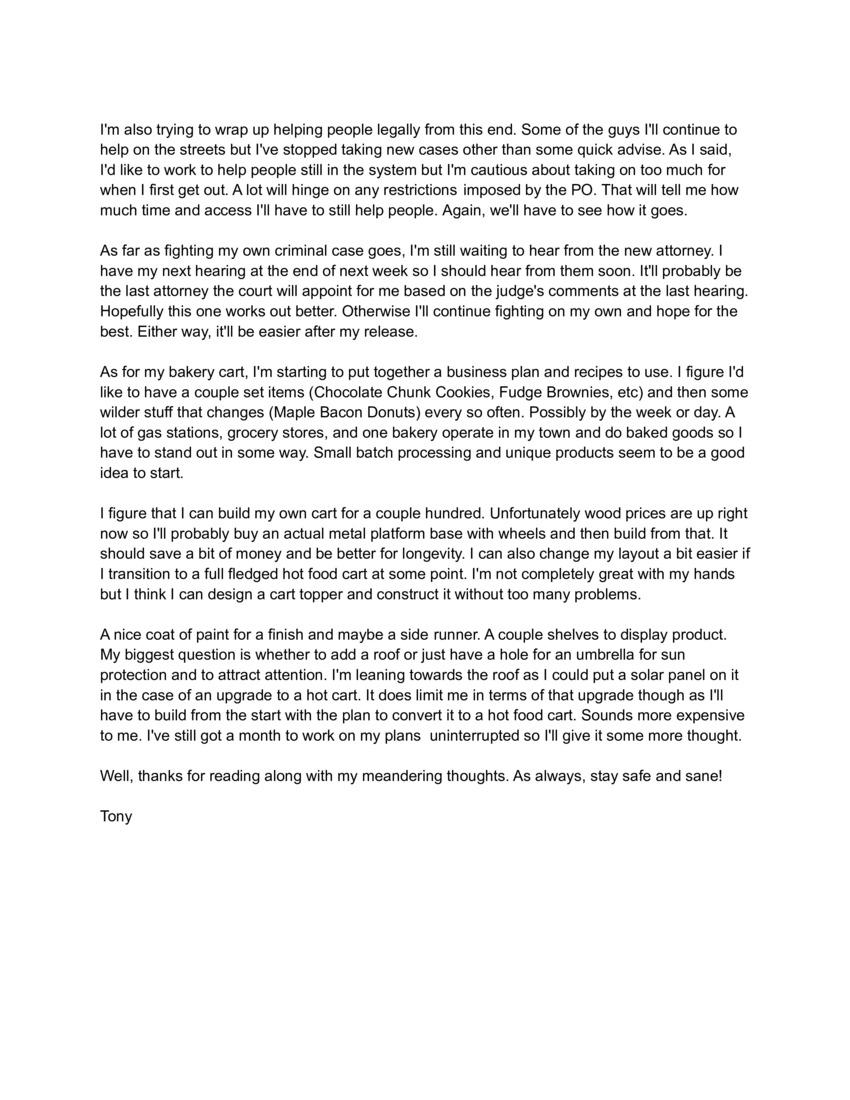 I've actually been feeling pretty good the past few days. Most unusual for me but I have been getting some stuff together. I just finished my paralegal class. The last test will be going in the mail shortly. I did like the class overall. It remains to be seen whether it will be respected on the streets. I'd imagine so as there are plenty of criminal defense attorneys that need a good paralegal. Of course, that's more of a backup plan for me. I much rather prefer working for myself whether baking, cooking or paralegaling (is that even a word?).

On a release bent, I also turned down an interview with the psychologist from the Exit Control Review Board (ECRB) (980/civil commitment for sexual offenders). I was expecting it so it didn't really catch me off guard. I passed the ECRB last time I got out so I assume I'll do the same this time around. It still provokes a bit of anxiety in that my entire freedom can still be put in jeopardy.

I firmly believe that the entire concept of a civil commitment based on a sexual offense after the person has served their sentence is fundamentally flawed. If the person has such a mental incapacity to allow them to be committed after their sentence then how are they competent to stand trial/commit a crime to begin with? Isn't a regular chapter 51 (mental health commitment) adequate to protect the individual and society from those deemed to have mental issues at that level of severity?

One of the things that gets to me is that in order for a civil commitment to be filed when you get released from prison is the fact that getting release from prison for a sexual offense is a prerequisite to the commitment. If the person hadn't been convicted of the crime and served their time they would not be eligible for the commitment. It reeks of a constitutional Double Jeopardy violation and fundamental unfairness. If a person is "crazy" then they should serve their time in a mental facility, not a prison.

My strong feelings about civil commitment aside, I'd imagine that I should get my clearance papers soon. I'm at a long month away from release and am getting things together. I wrote a long letter to my PO expressing my views on my Internet/computer restrictions. I guess we'll see how that goes at my next phone call with her. She may even decide to write me before that which would prove interesting. Most POs don't seem to want to put any type of discussion like that on the record except against you. We'll have to see.

I did hear from one of my friends on the streets that the WI DOC uses a program called Covenant Eyes (at $20/month) to monitor peoples' Internet-capable devices. For my part, I'll gladly pay that as I don't have intentions of doing anything illicit on my phone anyway. Kind of like saying, "Oh, I'll have to close out all these chats about dealing drugs so I can call my PO." Just as an example of course. But it should help me in my argument to have a smart phone or similar. Last time I was out they only approved a flip phone without Internet access for me. Seriously sucked.

I'm also trying to wrap up helping people legally from this end. Some of the guys I'll continue to help on the streets but I've stopped taking new cases other than some quick advise. As I said, I'd like to work to help people still in the system but I'm cautious about taking on too much for when I first get out. A lot will hinge on any restrictions imposed by the PO. That will tell me how much time and access I'll have to still help people. Again, we'll have to see how it goes.

As far as fighting my own criminal case goes, I'm still waiting to hear from the new attorney. I have my next hearing at the end of next week so I should hear from them soon. It'll probably be the last attorney the court will appoint for me based on the judge's comments at the last hearing. Hopefully this one works out better. Otherwise I'll continue fighting on my own and hope for the best. Either way, it'll be easier after my release.

As for the bakery cart, I'm starting to put together a business plan and recipes to use. I figure I'd like to have a couple set items (Maple Bacon Donuts) every so often. Possibly by the week or day. A lot of gas stations, grocery stores, and one bakery operate in my town and do baked goods so I have to stand out in some way. Small batch processing and unique products seem to be a good idea to start.

I figure that I can build my own cart for a couple hundred. Unfortunately wood prices are up right now so I'll probably buy an actual metal platform base with wheels and then build from that. It should save a bit of money and be better for longevity. I can also change my layout a bit easier if I transition to a full fledged hot food cart at some point. I'm not completely great with my hands but I think I can design a cart topper and construct it without too many problems.

A nice coat of paint for a finish and maybe a side runner. A couple shelves to display product. My biggest question is whether to add a roof or just have a hole for an umbrella for sun protection and to attract attention. I'm leaning towards the roof as I could put a solar panel on it in the case of an upgrade to a hot cart. It does limit me in terms of that upgrade though as I'll have to build from the start with the plan to convert it to a hot food cart. Sounds more expensive to me. I've still got a month to work on my plans uninterrupted so I'll give it some more thought.

Well, thanks for reading along with my meandering thoughts. As always, stay safe and sane!