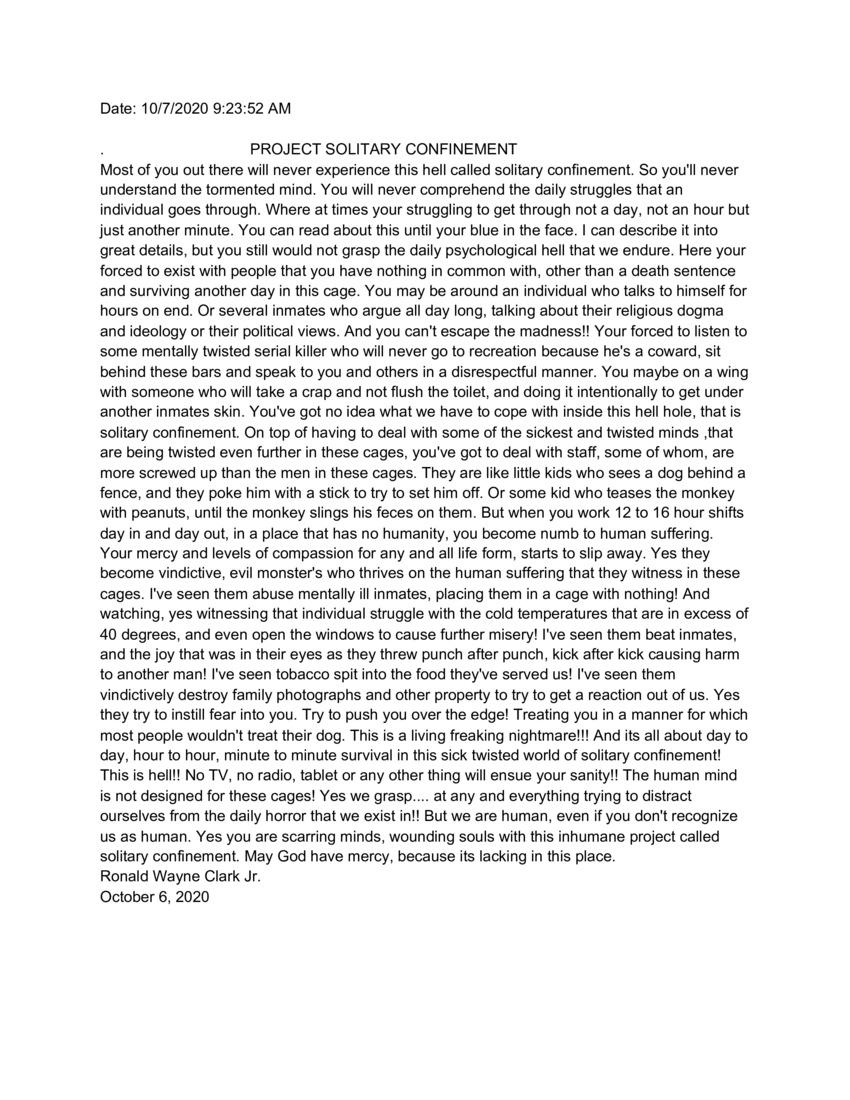 PROJECT SOLITARY CONFINEMENT
Most of you out there will never experience this hell called solitary confinement. So you'll never understand the tormented mind. You will never comprehend the daily struggles that an individual goes through. Where at times your struggling to get through not a day, not an hour but just another minute. You can read about this until your blue in the face. I can describe it into great details, but you still would not grasp the daily psychological hell that we endure. Here your forced to exist with people that you have nothing in common with, other than a death sentence and surviving another day in this cage. You may be around an individual who talks to himself for hours on end. Or several inmates who argue all day long, talking about their religious dogma and ideology or their political views. And you can't escape the madness!! Your forced to listen to some mentally twisted serial killer who will never go to recreation because he's a coward, sit behind these bars and speak to you and others in a disrespectful manner. You maybe on a wing with someone who will take a crap and not flush the toilet and doing it intentionally to get under another inmates skin. You've got no idea what we have to cope with inside this hell hole. that is solitary confinement. On top of having to deal with staff, some of whom, are more screwed up than the men in these cages. They are like little kids who sees a dog behind a fence, and they poke him with a stick to try to set him off. Or some kid who teases the monkey with peanuts, until the monkey slings his feces on them. But when you work 12 to 16 hour shifts day in and day out, in a place that has no humanity, you become numb to human suffering. Your mercy and levels of compassion for any and all life form, starts to slip away. Yes they become vindictive, evil monster's who thrives on the human suffering that they witness in these cages. I've seen them abuse mentally ill inmates, placing them in a cage with nothing! And watching, yes witnessing that individual struggle with the cold temperatures that are in excess of 40 degrees, and even open the windows to cause further misery! I've seen them beat inmates, and the joy that was in their eyes as they threw punch after punch, kick after kick causing harm to another man! I've seen tobacco spit into the food they've served us! I've seen them vindictively destroy family photographs and other property to try to get a reaction out of us. Yes they try to instill fear into you. Try to push you over the edge! Treating you in a manner for which most people wouldn't treat their dog. This is a living freaking nightmare!!! And its all about day to day, hour to hour, minute to minute survival in this sick twisted world of solitary confinement! This is hell!! No TV, no radio, tablet or any other thing will ensue your sanity!! The human mind is not designed for these cages! Yes we grasp....at any and everything trying to distract ourselves from the daily horror that we exist in!! But we are human, even if you don't recognize us as human. Yes you are scarring minds, wounding souls with this inhumane project called solitary confinement. May God have mercy, because its lacking in this place.
Ronald Wayne Clark Jr.
October 6, 2020