4th Time Is A Charm? 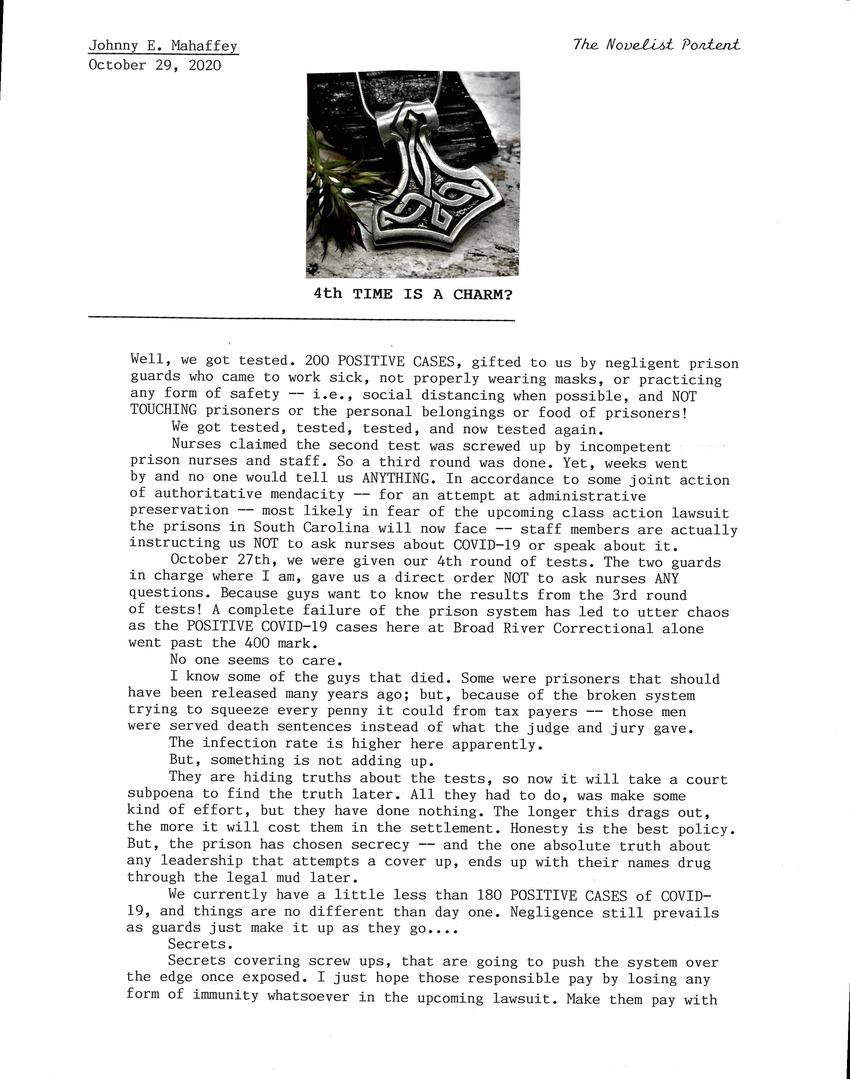 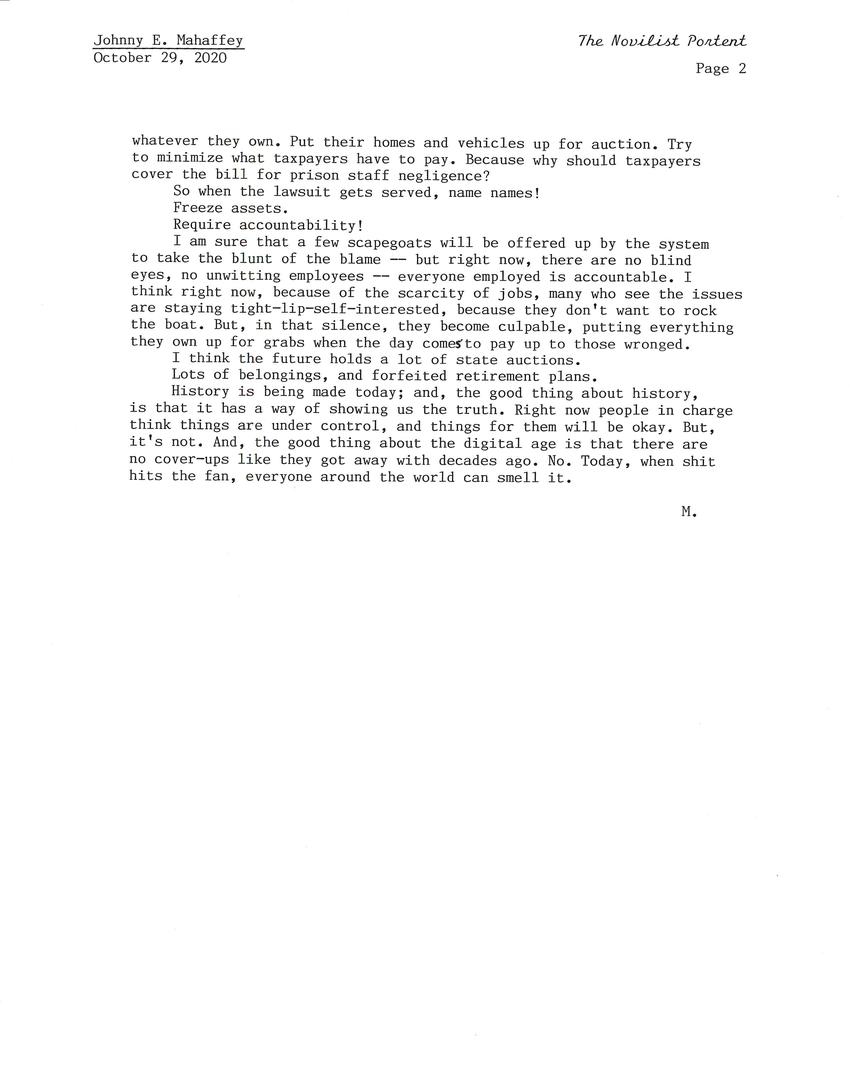 The Novelist Portent
Johnny E. Mahaffey
October 29, 2020
Well, we got tested 200 Positive Cases, gifted to us by negligent prison guards who came to work sick, not properly wearing masks or practicing touching prisoners or the personal belongings or food of prisoners! We got tested, tested, tested and now tested again. Nurses claimed the second test was screwed up by incompetent prison nurses and staff. So a third round was done. Yet, weeks went by and no one would tell us anything. In accordance to some joint action of authoritative mendacity- for an attempt at administrative preservation- most likely in fear of the upcoming class action lawsuit the prisons in South Carolina will now face- staff members are actually instructing us NOT to ask nurses about COVID-19 or speak about it.
October 27th, we were given our fourth round of tests. The two guards in charge where I am, gave us a direct order NOT to ask nurses ANY questions. Because guys want to know the results from the 3rd round of tests! A complete failure of the prison system has led to utter chaos as the POSITIVE COVID-19 cases here at Broad River Correctional alone went past the 400 mark. No one seems to care. I know some of the guys that died. Some were prisoners that should have been released many years ago; but, because of the broken system trying to squeeze every penny it could from tax payers --those men were served death sentences instead of what the judge and jury gave. The infection rate is higher here apparently. But, something is not adding up. They are hiding truths about the tests, so now it will take a court subpoena to find the truth later. All they had to do, was make some kind of effort, but they have done nothing. The longer this drags out, the more it will cost them in the settlement. Honesty is the best policy. But, the prison has chosen secrecy -- and the one absolute truth about any leadership that attempts a cover up, ends with their names drug through the legal mud later. We currently have a little less than 180 positive cases of covid-19 and things are no different than day one. Negligence still prevails as guards just make it up as they go......
Secrets.
Secrets covering screw ups that are going to push the system over the edge once exposed. I just hope these responsible pay by losing any form of immunity whatsoever in the upcoming lawsuit. Make they pay whatever they own. Put their homes and vehicles up for auction. Try to minimize what taxpayers have to pay. Because why should taxpayers cover the bill for prison staff negligence?
So when the lawsuit gets served, name names!
Freeze assets.
Require accountability!
I am sure that a few scapegoats will be offered up by the system to take the blunt of the blame -- but right now, there are no blind eyes, no unwitting employees -- everyone employed is accountable. I think right now, because of the scarcity of jobs, many who see the issues are staying tight-lip-self-interested, because they don't want to rock the boat. But, in that silence, they become culpable, putting everything they own up for grabs when the day comes to pay up to those wronged.
I think the future holds a lot of state auctions.
Lots of belongings, and forfeited retirement plans.
History is being made today; and the good thing about history is that it has a way of showing us the truth. Right now, people in charge think things are under control, and things for them will be okay. But, it's not. And the good thing about the digital age is that there are no cover-ups like they got away with decades ago. No. Today, when shit hits the fan, everyone around the world can smell it.
M.