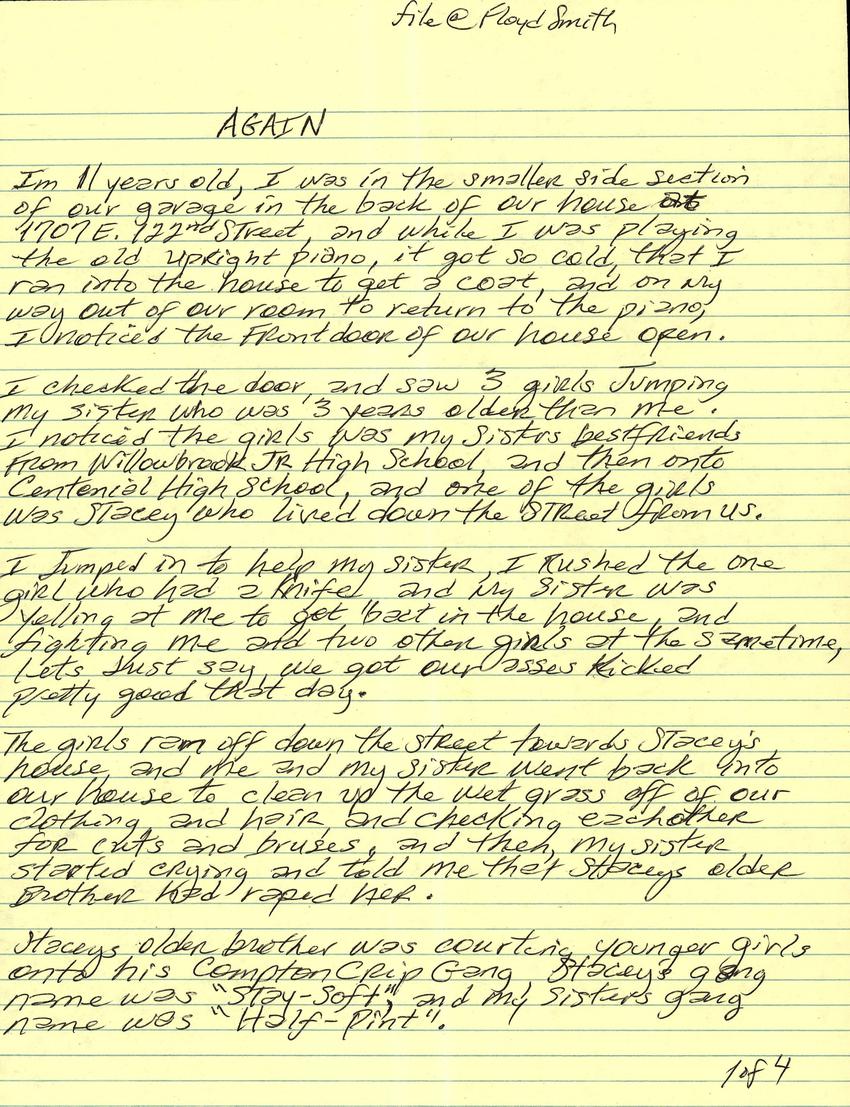 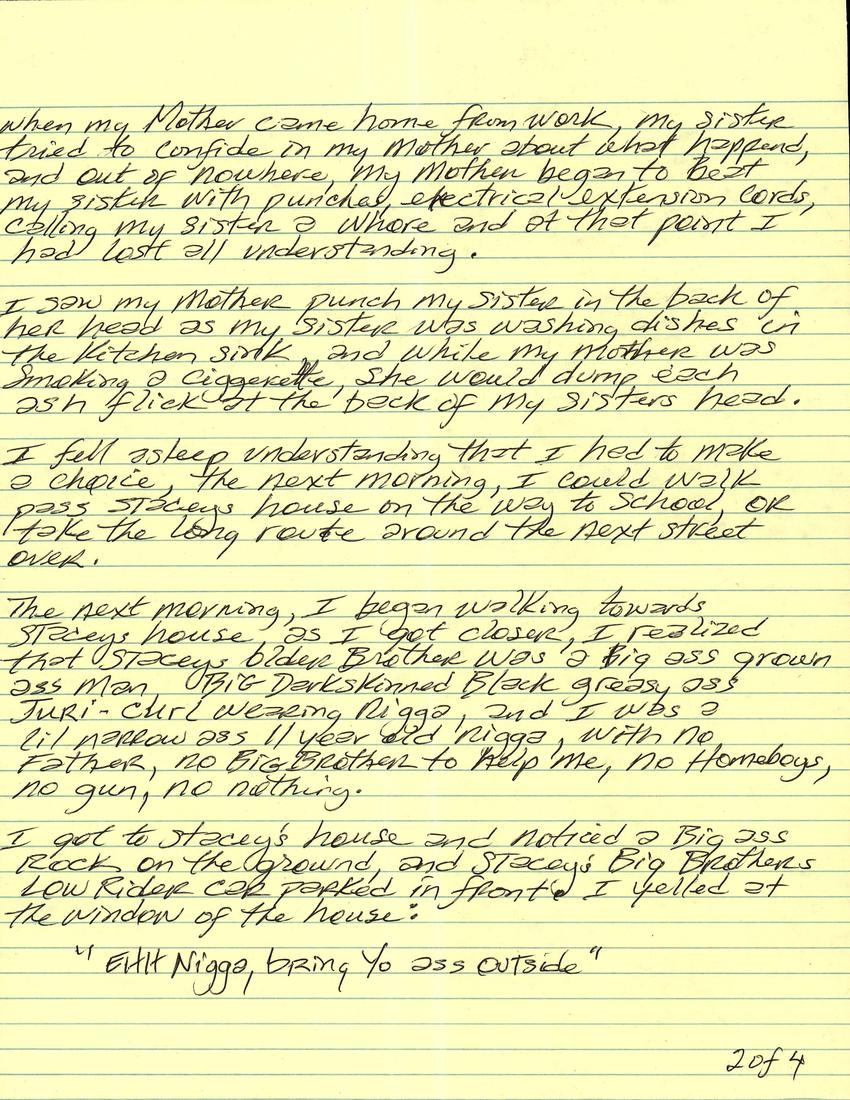 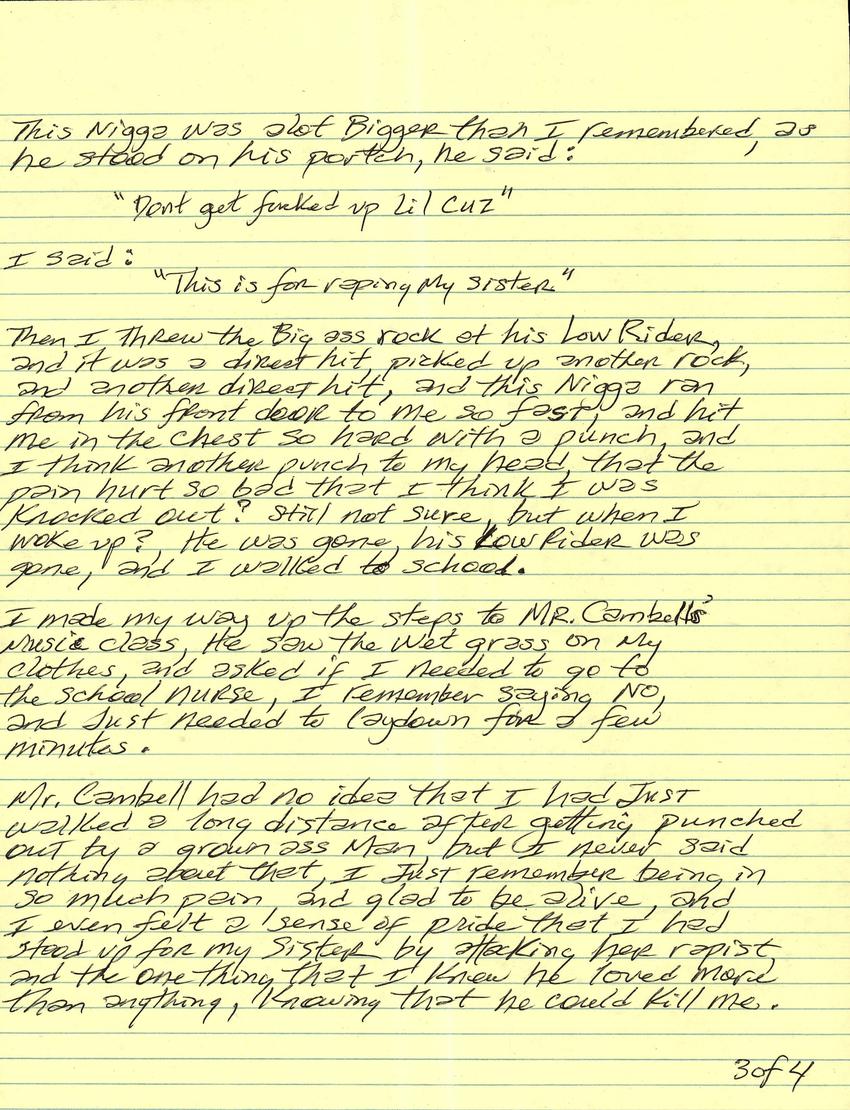 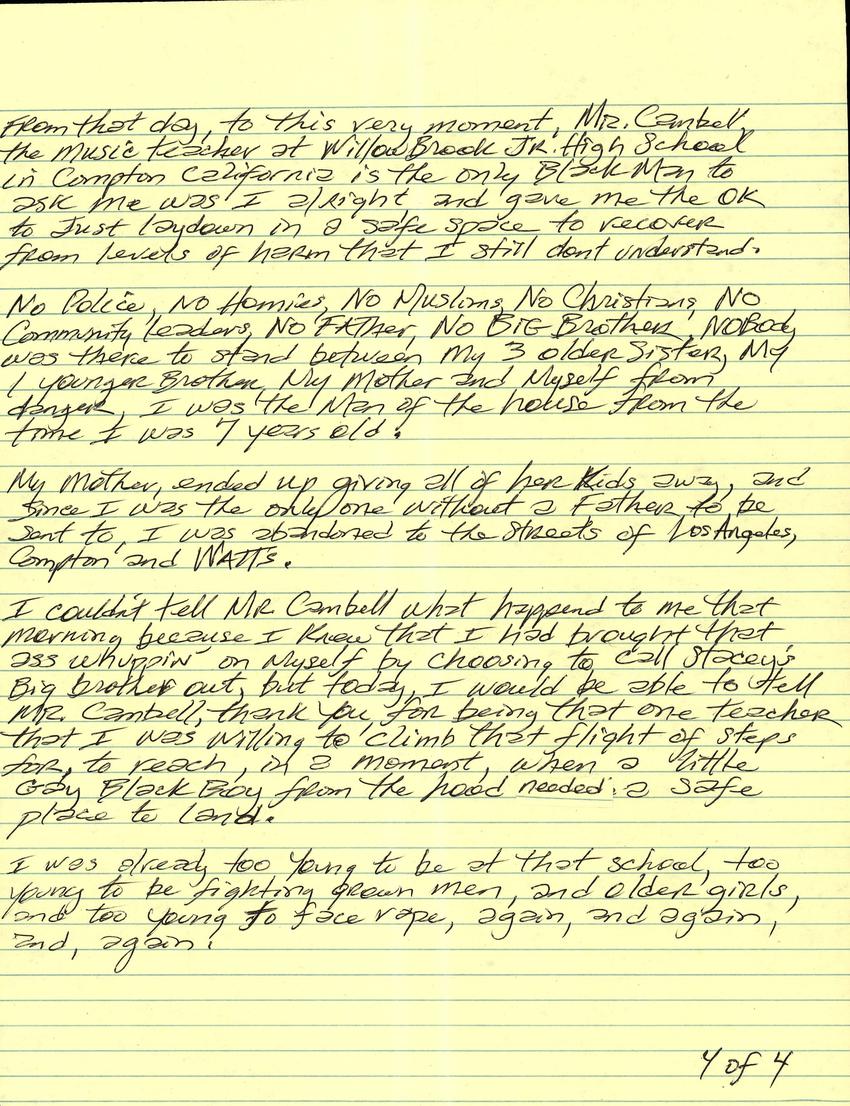 Im 11 years old, I was in the smaller side section
of our garage in the back of our house at
1707E. 122nd Street, and while I was playing
the old upright piano, it got so cold, that I
ran into the house to get a coat, and on my
way out of our room, to return to the piano,
I noticed the Front door of our house open.

I checked the door, and saw 3 girls Jumping
my sister who was 3 years older than me.
I noticed the girls was my sisters bestfriends
From Willowbrook Jr High School, and then onto
Centenial High School, and one of the girls
was Stacey who lived down the street from us.

I Jumped in to help my sister, I rushed the one
girl who had a knife and my sister was
yelling at me to get back in the house and
fighting me and two other girls at the same time,
lets just say we got our asses Kicked
pretty good that day.

The girls ran off down the street towards Stacey's
house and me and my sister went back into
our house to clean up the wet grass off of our
clothing and hair and checking each other
for cuts and bruises, and then my sister
started crying and told me that Staceys older
Brother had raped her.

When my Mother came home from work, my sister
tried to confide in my Mother about what happened,
and out of nowhere my Mother began to beat
my sister with punches, electrical extension cords,
calling my sister a whore and at that point I
had lost all understanding.

I saw my mother punch my sister in the back of
her head as my sister was washing dishes in
the Kitchen sink and while my mother was
Smoking a ciggerette, she would dump each
ash flick at the back of my sisters head.

I fell asleep understanding that I had to make
a choice, the next morning, I could walk
pass Staceys house on the way to school, or
take the long route around the next street
over.

The next morning, I began walking towards
Staceys house, as I got closer, I realized
that Staeys older Brother was a Big ass grown
ass man, BiG Darkskinned Black greasy ass
Juri-curl wearing nigga, and I was a
lil narrow ass 11 year old nigga, with no
Father, no Big Brother to help me, no Homeboys,
no gun, no nothing.

I got to Stacey's house and noticed a Big ass
Rock on the ground, and Stacey's Big Brothers
Low Rider car parked in front. I yelled ay
the window of the house:

"EHH Nigga, bring Yo ass outside"

This Nigga was a lot Bigger than I remembered, as
he stood on his portch, he said:

"Done get fucked up lil cuz"

"This is for raping my sister"

Then I threw the Big ass rock at his Low Rider,
and it was a direct hit, picked up another rock,
and another direct hit, and this Nigga ran
from his front door to me so fast, and hit
me in the chest so hard with a punch, and
I think another punch to my head that the
pain hurt so bad that I think I was
Knocked out? Still not sure, but when I
woke up? He was gone, his Low Rider was
gone, and I walked to school.

I made my way up the steps to Mr.Cambell's
music class, He saw the wet grass on my
clothes, and asked is I needed to go to
the school nurse, I remember saying No,
and just needed to laydown for a few
minutes.

Mr. Cambell had no idea that I has just
walked a long distance after getting punched
out by a grown ass Man, but I never said
nothing about that, I just remember being in
so much pain, and glad to be alive, and
I even felt a sense of pride that I has
stood up for my sister by attacking her rapist,
and the one thing that I knew he loved more
than anything, knowing that he could kill me.

From that day, to this very moment, Mr. Cambell
the music teacher at WillBrook Jr High School
in Compton California is the only Black Man to
ask me was I alright and gave me the OK
to just laydown in a safe space to recover
from levels of harm that I still dont understand.

No Police, No Homies, No Muslims, No Christians, No
Community leaders, No Father, No Big Brothers, NOBODY
was there to stand between my 3 older sister, My
1 younger Brother, My mother and myself from
danger, I was the Man of the house from the
time I was 7 years old!

My mother, ended up giving all of her kids away, and
ssince I was the only one with out a Father, to be
sent to, I was abandoned to the streets of Los Angeles,
Compton and WATTs.

I couldn't tell Mr. Cambell what happened to me that
morning because I knew that I had brought that
ass whuppin' on myself by choosing to call Stacey's
Big brother out, but thank you for being that one teacher
that I was willing to climb that flight of steps
for, to reach, in a moment, when a little
Gay Black Boy from the hood needed a safe
place to land.

Your words made me cry. I hope you're doing well. I finished the transcription for your post, and I hope to hear from you again soon.
Thank you so much for allowing me to read your story and transcribe it. I am so proud of you for what you did to stand up for your sister, and thinking of you now from Boston, MA. I hope you are staying safe and healthy.
Hello Gary
That was a David V Goliath experience for you. On my many years here on Earth, and as a woman I have often despaired at how often women are the ‘gatekeepers’ of female abuse in communities. They allow their daughters to be given away in forced marriages, or they ignore sexual abuse gong on it their homes, or they fail to seek justice for their children harmed in society.
A friend of mine had been abused for many years by her father. He mother came to our home for a visit, she lived in another country. One morning at breakfast when my friend was out of the room, we were discussing the abuse which my friend had been speaking about to her. Out of earshot of this conversation this woman admitted to me that she knew some was going on, but she was afraid to reveal it. It shocked me. But that’s how some women are. They look out for their own skins on their backs, children seem to be let to fare for themselves. An animal shows more care to its young. But ultimately you have to forgive these women, they were made to be like this. The only way to stop it is to break the cycle. Take the words of children seriously, let them see justice done.
I used to be a very good rock thrower in my day! Glad you got him a few times. He knew he was exposed. And a child hurt him, and by hitting a kid he looks weak. I’d like to think he learned a lesson, but you and I live in the real world, and that rarely happens.
Each experience as a child is a building block. Some experiences just build unstable towers. It’s only a short time being a child, one would think people would just focus and try to build a strong boy, rather than trying to repair a broken man.
All the best Gary
T
(scanned reply – view as blog post)
uploaded Jan. 6, 2021.  Original (PDF) 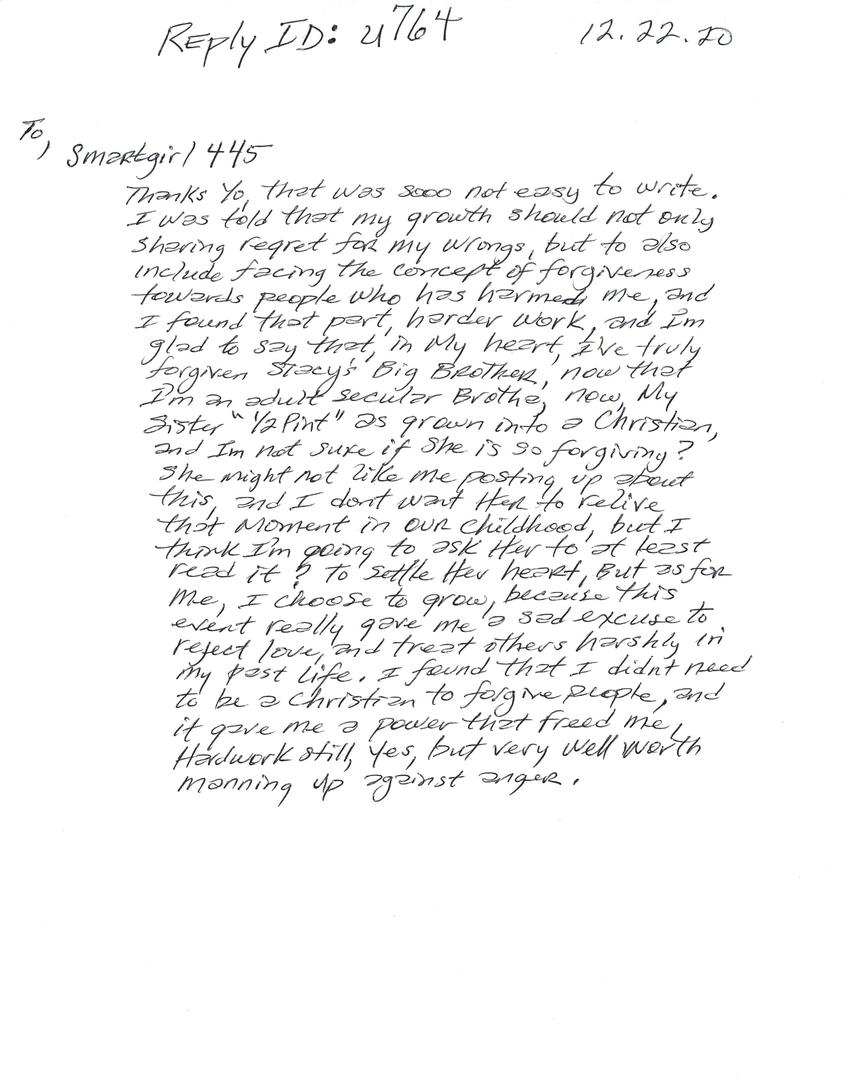 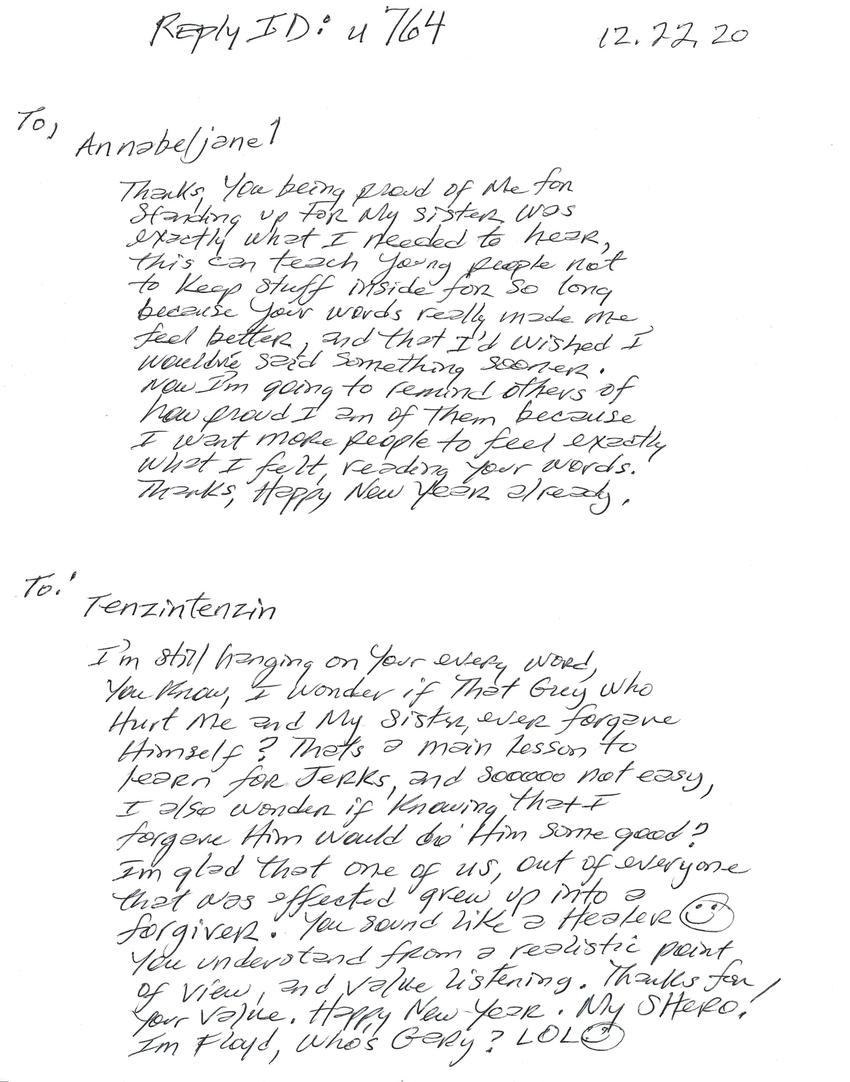 Hello Floyd.
Where did I get Gary from, I’ve seriously confused myself! I don’t reply to many posters on here, so I can’t use that as an excuse. Gary on my mind? Bizarre.
Hope you are okay and have managed to allude the dreaded covid. Full scale inoculation programme going on here. I’m not sure I want to have it though. We are offered the Pfizer one, it’s based on chimpanzee dna. So I think I will give it a miss, until something less frankensteinien arrives. God knows what that will do in someone’s body. There’s three different vaccines available in the U.K. In the USA I think you have a different one. I watched an alarming documentary about how AIDS became established following some terrible research done by scientists in Sierra Leone. A very troubling story. The human beings mind is an awful place at times.
Are you in contact with any of your brothers and sisters? Do they still live in the same area?
Rock throwing was the go to defence system of my childhood. No one used knives or guns or anything like that. A fight was a physical altercation between two people, sometimes people jumped you and you got a bit of a kicking, but nothing like the violence that is arbitrarily metered out today. It’s crazy violent now. A few days ago three children were arrested for their part in a murder, two 12 year olds and a 13 year old. Even with the elevated sentencing we see today these kids will go to a special unit until they are 18, then adult jail and will probably be released at age 21. UK law supports children who fall foul of it. But until the mindset changes and perceived slights and reputations to protect are seen for what they really are, something to ignore, then more mailings will happen.
I try to be a forgiver, but I do hold the occasional grudge. I’ve had my life changed by people, had a liar make my life derail quite radically. But you can’t defend yourself against a practiced competent liar. TD jakes says that forgiveness is a gift you give yourself. And I believe that. So I try.
Hope you are in good health. Keep on keeping on as they say.
T