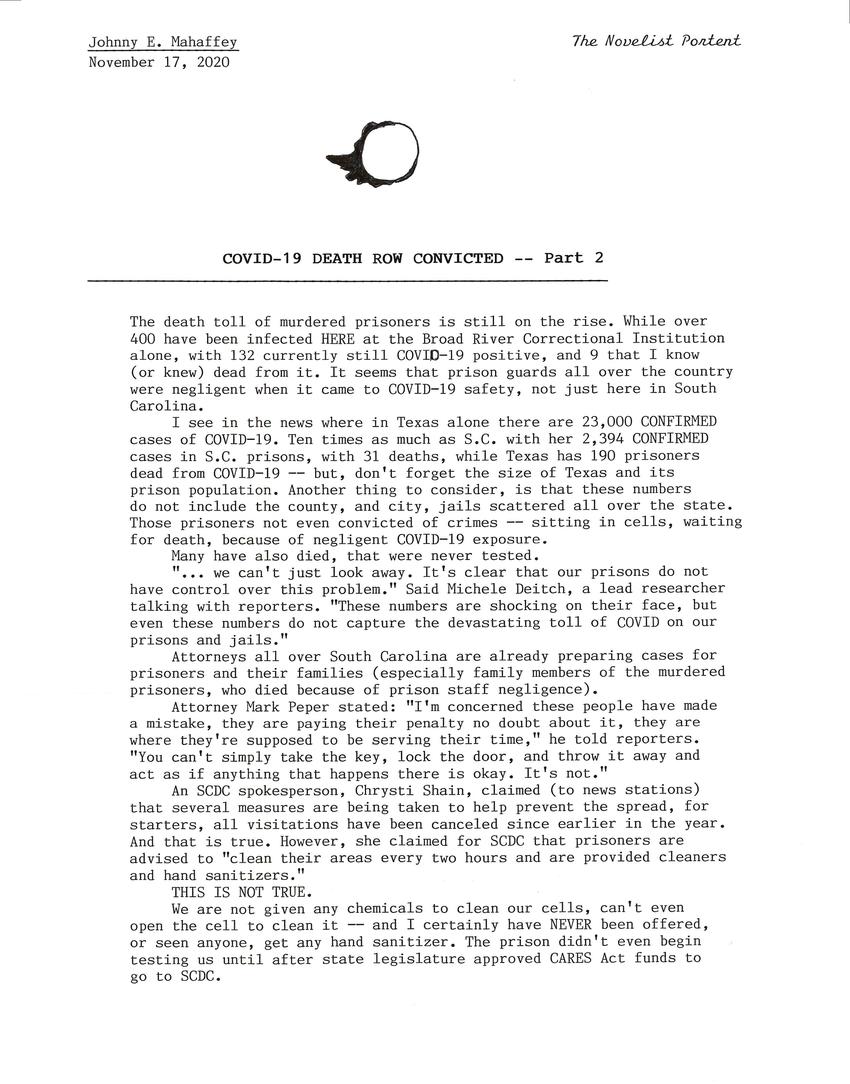 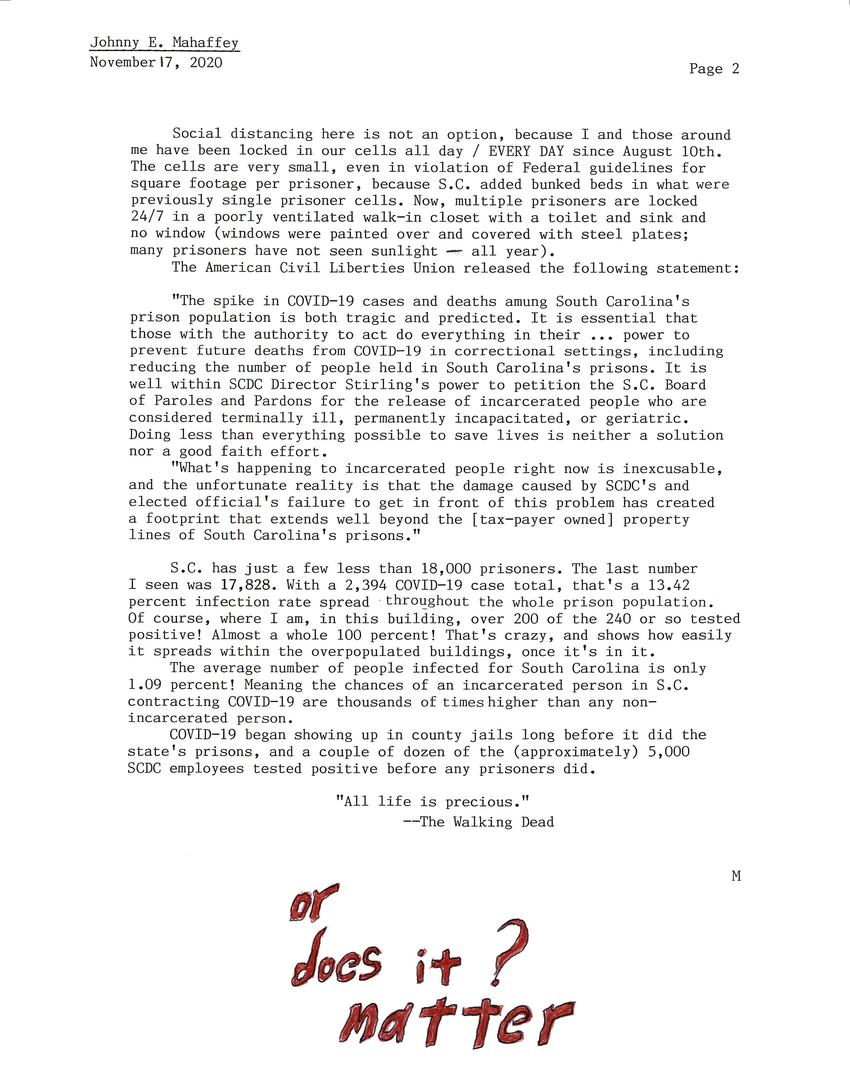 The death toll of murdered prisoners is still on the rise. While over 400 have been infected HERE at the Broad River Correctional Institution alone, with 132 currently still COVID-19 positive, and 9 that I know (or knew) dead from it. It seems that prison guards all over the country were negligent when it came to COVID-19 safety, not just here in South Carolina.

I see in the news where in Texas alone there are 23,000 CONFIRMED cases of COVID-19. Ten times as much as S.C. With her 2,394 CONFIRMED cases in S.C. prisons, with 31 deaths, while Texas has 190 prisoners dead from COVID-19 — but, don’t forget the size of Texas and it’s prison population. Another thing to consider, is that these numbers do not include the county, and city, jails scattered all over the state. Those prisoners not even convicted of crimes — sitting in cells, waiting for death, because of negligent COVID-19 exposure.
Many have also died, that were never tested.

“... we can’t just look away. It’s clear that our prisons do not have control over this problem”. Said Michele Deitch, a lead researcher talking with reporters. “These numbers are shocking on their face, but even these numbers do not capture the devastating toll of COVID on our prisons and jails.”

Attorneys all over South Carolina are preparing cases for prisoners and their families (especially family members of the murdered prisoners, who died because of prison staff negligence).

Attorney Mark Peper stated: “I’m concerned these people have made a mistake, they are paying their penalty no doubt about it, they are where they’re supposed to be serving their time,” he told reporters.”You can’t simply take the key, lock the door, and throw it away and act as if anything that happens there is okay. It’s not.”

An SCDC spokesperson, Chrysti Shain, claimed (to news stations) that several measures are being taken to help prevent the spread, for starters, all visitations have been canceled since earlier in the year. And that is true. However she claimed for SCDC that prisoners are advised to “clean their areas every two hours and are provided cleaners and hand sanitizers.”
THIS IS NOT TRUE.

We are not given any chemicals to clean our cells, can’t even open the cell to clean it — and I certainly have NEVER been offered, or seen anyone, get any hand sanitizer. The prison didn’t even begin testing us until after state legislature approved CARES Act funds to go to SCDC.

Social distancing here is not an option, because I and those around me have been locked in our cells all day / EVERY DAY since August 10th. The cells are very small, even in violation of Federal guidelines for square footage per prisoner, because S.C. added bunked beds in what were previously single prisoner cells. Now, multiple prisoners are locked 24/7 in a poorly ventilated walk-in closet with a toilet and sick and no window (windows were painted over and covered with steel plates; many prisoners have not seen sunlight- all year).

The American Civil liberties Union released the following statement:
“The spike in COVID-19 cases and deaths among South Carolina’s prison population is both tragic and predicted. It is essential that those with the authority to act do everything in their ... power to prevent future deaths from COVID-19 in correctional settings, including reducing the number of people held in South Carolina’s prisons. It is well within SDC Director Sterling’s power to petition the S.C. Board of Paroles and Pardons for the release of incarcerated people who are considered terminally ill, permanently incapacitated, or geriatric. Doing less than everything possible to save lives is neither a solution nor a good faith effort.

“What’s happening to incarcerated people right now is inexcusable, and the unfortunate reality is that the damage caused by SCDC’s and elected official’s failure to get in front of this problem has created a footprint that extends well beyond the [tax-payer owned] property lines of South Carolina’s prisons.”

S.C. has just a few less than 18,000 prisoners. The last number I seen was 17,828. With a 2,394 COVID-19 case total, that’s a 13.42 percent infection rate spread throughout the whole prison population. Of course, where I am, in this building, over 200 of the 240 or so tested positive! Almost a whole 100 percent! That’s crazy, and shows how easily it spreads within the overpopulated buildings, once it’s in it.

The average number of people infected for South Carolina is only 1.09 percent! Meaning the chances of an incarcerated person in S.C. contracting COVID-19 are thousands of times higher than any non-incarcerated person.

COVID-19 began showing up in county jails long before it did the state’s prisons, and a couple of dozen of the (approximately) 5,000 SCDC employees tested positive before any prisoners did.

“All life is precious.”
—The Walking Dead

or does it? matter