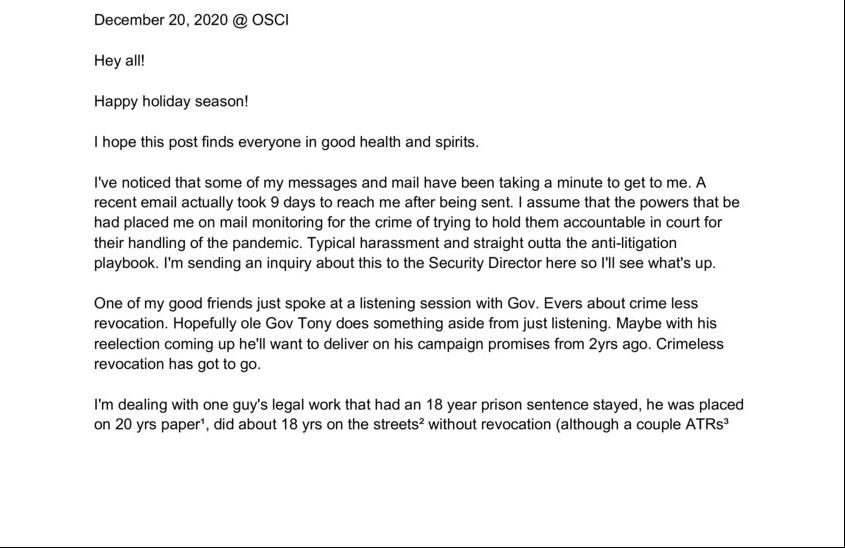 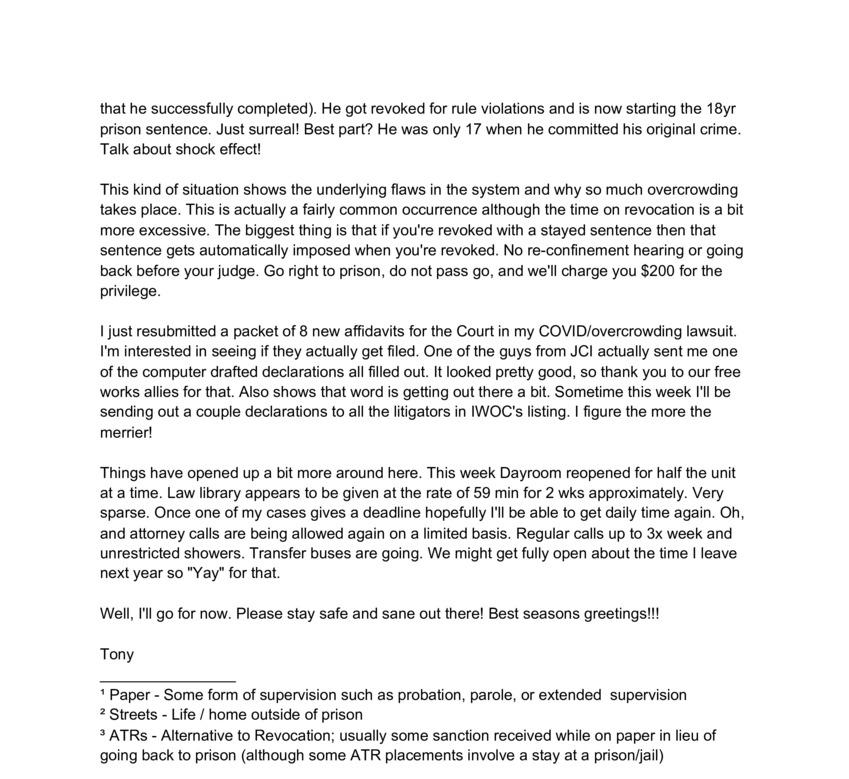 I hope this post finds everyone in good health and spirits.

I've noticed that some of my messages and mail have been taking a minute to get to me. A recent email actually took 9 days to reach me after being sent. I assume that the powers that be had placed me on mail monitoring for the crime of trying to hold them accountable in court for their handling of the pandemic. Typical harassment and straight outta the anti-litigation playbook. I'm sending an inquiry about this to the Security Director here so I'll see what's up.

One of my good friends just spoke at a listening session with Gov. Evers about crime less revocation. Hopefully ole Gov Tony does something aside from just listening. Maybe with his reelection coming up he'll want to deliver on his campaign promises from 2yrs ago. Crimeless revocation has got to go.

I'm dealing with one guy's legal work that had an 18 year prison sentence stayed, he was placed on 20 yrs paper(1), did about 18 yrs on the streets(2) without revocation (although a couple ATRs(3) that he successfully completed). He got revoked for rule violations and is now starting the 18yr prison sentence. Just surreal! Best part? He was only 17 when he committed his original crime. Talk about shock effect!

This kind of situation shows the underlying flaws in the system and why so much overcrowding takes place. This is actually a fairly common occurrence although the time on revocation is a bit more excessive. The biggest thing is that if you're revoked with a stayed sentence then that sentence gets automatically imposed when you're revoked. No re-confinement hearing or going back before your judge. Go right to prison, do not pass go, and we'll charge you $200 for the privilege.

I just resubmitted a packet of 8 new affidavits for the Court in my COVID/overcrowding lawsuit. I'm interested in seeing if they actually get filed. It looked pretty good, so thank you to our free work allies for that. Also shows that word is getting out there a bit. Sometime this week I'll be sending out a couple declarations to all the litigators in IWOC's listing. I figure the more the merrier!

Things have opened up a bit more around here. This week Dayroom reopened for half the unit at a time. Law library appears to be given at the rate of 59 min for 2 wks approximately. Very sparse. Once one of my cases gives a deadline hopefully I'll be able to get daily time again. Oh, and attorney calls are being allowed again on a limited basis. Regular calls up to 3x week and unrestricted showers. Transfer buses are going. We might get fully open about the time I leave next year so "Yay" for that.

(1) Paper - Some form of supervision such as probation, parole, or extended supervision
(2) Streets - Life / home outside of prison
(3) ATRs - Alternative to Revocation; usually some sanction received while on paper in lieu of going back to prison (although some ATR placements involve a stay at a prision/jail)

Thanks for writing! I finished the transcription for your post. I think that it is inspiring that you are taking action with the pandemic