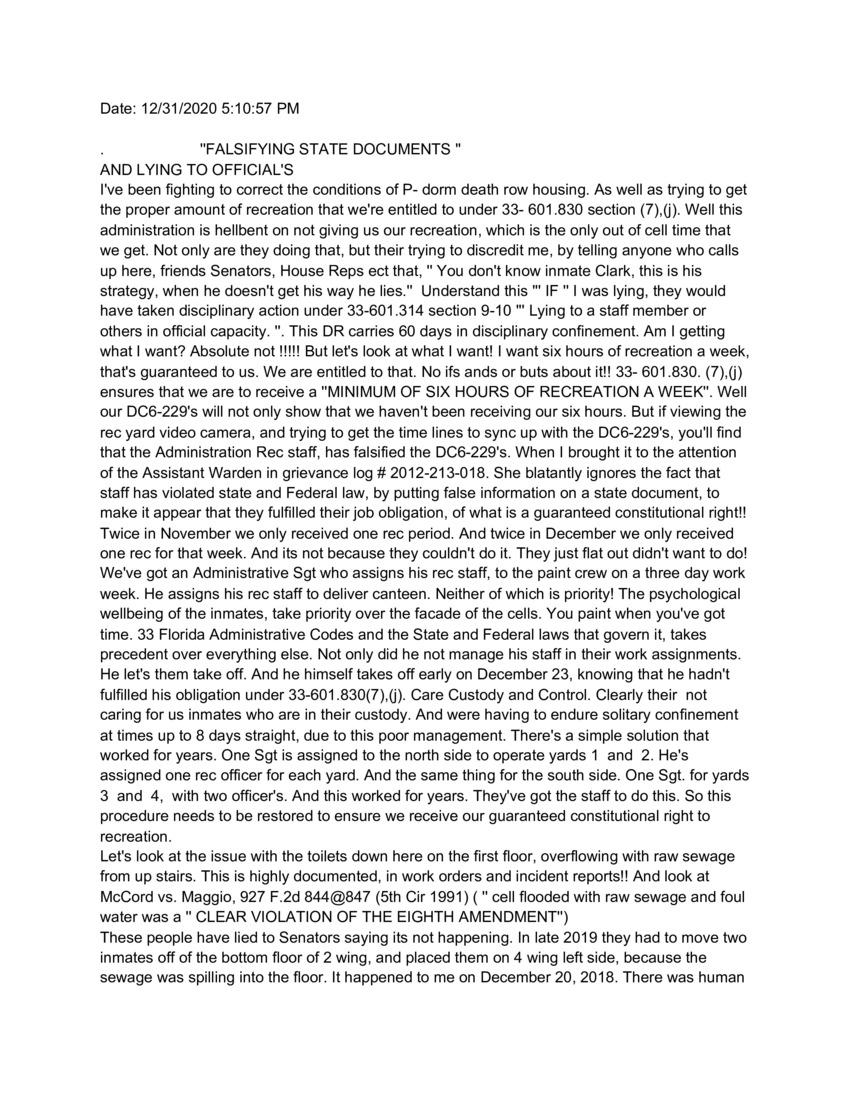 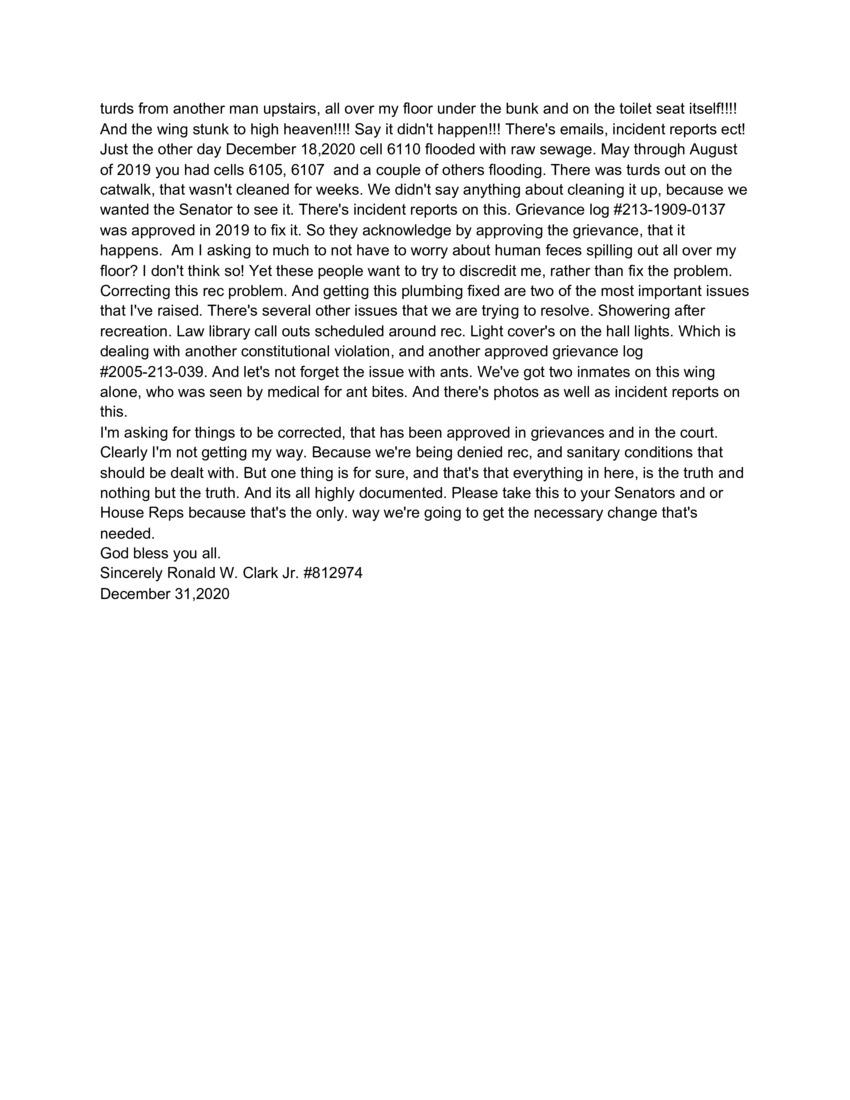 "FALSIFYING STATE DOCUMENTS"
AND LYING TO OFFICIAL'S
I've been fighting to correct the conditions of P- dorm death row housing. As well as trying to get the proper amount of recreation that we're entitled to under 33-601.830 section (7),(j). Well this administration is hellbent on not giving us our recreation, which is the only out of cell time that we get. Not only are they doing that, but their trying to discredit me, by telling anyone who calls up here, friends Senators, House Reps ect that, "You don't know inmate Clark, this is his strategy, when he doesn't get his way he lies." Understand this "IF" I was lying, they would have taken disciplinary action under 33-601.314 section 9-10 "Lying to a staff member or others in official capacity. ". This DR carries 60 days in disciplinary confinement. Am I getting what I want? Absolute not!!!!! But let's look at what I want! I want six hours of recreation a week, that's guaranteed to us. We are entitled to that. No ifs ands or buts about it!! 33-601.830 (7),(j) ensures that we are to receive a "MINIMUM OF SIX HOURS OF RECREATION A WEEK". Well our DC6-229's will not only show that we haven't been receiving our six hours. But if viewing the rec yard video camera, and trying to get the time lines to sync up with the DC6-229's, you'll find that the Administration Rec staff, has falsified the DC6-229's. When I brought it to the attention of the Assistant Warden in grievance log #2012-213-018. She blatantly ignores the fact that staff has violated state and Federal law, by putting false information on a state document, to make it appear that they fulfilled their job obligation, of what is a guaranteed constitutional right!! Twice in November we only received one rec period. And twice in December we only received one rec for that week. And its not because they couldn't do it. They just flat out didn't want to do! We've got an Administrative Sgt who assigns his rec staff, to the paint crew on a three day work week. He assigns his rec staff to deliver canteen. Neither of which is priority! The psychological wellbeing of the inmates, take priority over the facade of the cells. You paint when you've got time. 33 Florida Administrative Codes and the State and Federal laws that govern it, takes precedent over everything else. Not only did he not manage his staff in their work assignments. He let's them take off. And he himself takes off early on December 23, knowing that he hadn't fulfilled his obligation under 33-601.830(7), (j). Care Custody and Control. Clearly their not caring for us inmates who are in their custody. And were having to endure solitary confinement at times up to 8 days straight, due to this poor management. There's a simple solution that worked for years. One Sgt is assigned to the north side to operate yards 1 and 2. He's assigned one rec officer for each yard. And the same ting for the south side. One Sgt. for yards 3 and 4, with two officer's. And this worked for years. They've got staff to do this. So this procedure needs to be restored to ensure we receive our guaranteed constitutional right to recreation.
Let's look at this issue with the toilets down here on the first floor, overflowing with raw sewage from up stairs. This is highly documented, in work orders and incident reports!! And look at McCord vs. Maggio, 927 F.2d844@847 (5th Cir 1991) ("cell flooded with raw sewage and foul water was a "CLEAR VIOLATION OF THE EIGHTH AMENDMENT")
These people have lied to Senators saying its not happening. In late 2019 they had to move two inmates off of the bottom floor of 2 wing, and placed them on 4 wing left side, because the sewage was spilling into the floor. It happened to me on December 20, 2018. There was human turds from another man upstairs, all over my floor under the bunk and on the toilet seat itself!!!! And the wing stunk to high heaven!!!! Say it didn't happen!!! There's emails, incident reports ect! Just the other day December 18, 2020 cell 6110 flooded with raw sewage. May through August of 2019 you had cells 6105, 6107 and a couple of others flooding. There were turds out on the catwalk, that wasn't cleaned for weeks. We didn't say anything about cleaning it up, because we wanted the Senator to see it. There's incident reports on this. Grievance log #213-1909-0137 was approved in 2019 to fix it. So they acknowledge by approving the grievance, that it happens. Am I asking to much to not have to worry about human feces spilling out all over my floor? I don' think so! Yet these people want to try to discredit me, rather than fix the problem. Correcting this rec problem. And getting this plumbing fixed are two of the most important issues that I've raised. There's several other issues that we are trying to resolve. Showering after recreation. Law library call outs scheduled around rec. Light cover's on the hall lights. Which is dealing with another constitutional violation, and another approved grievance log #2005-213-039. And let's not forget the issue with ants. We've got two inmates on this wing alone, who was seen by medical for ant bites. And there's photos as well as incident reports on this.
I'm asking for things to be corrected, that has been approved in grievances and in the court. Clearly Im not getting my way. Because we're being denied rec, and sanitary conditions that should be dealt with. But one thing is for sure, and that's that everything in here, is the truth and nothing but the truth. And its all highly documented. Please take this to your Senators and or House Reps because that's the only way we're going to get the necessary change that's needed.
God bless you all.
Sincerely Ronald W. Clark Jr. #812974
December 31,2020