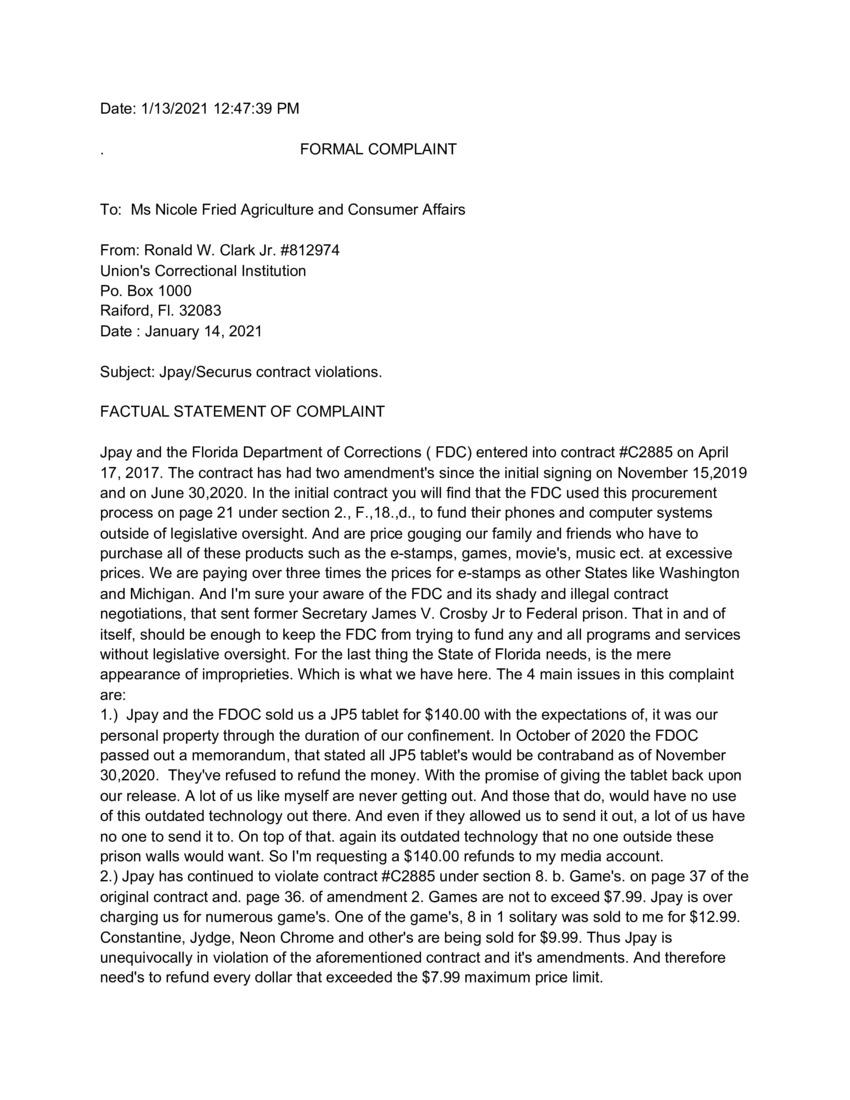 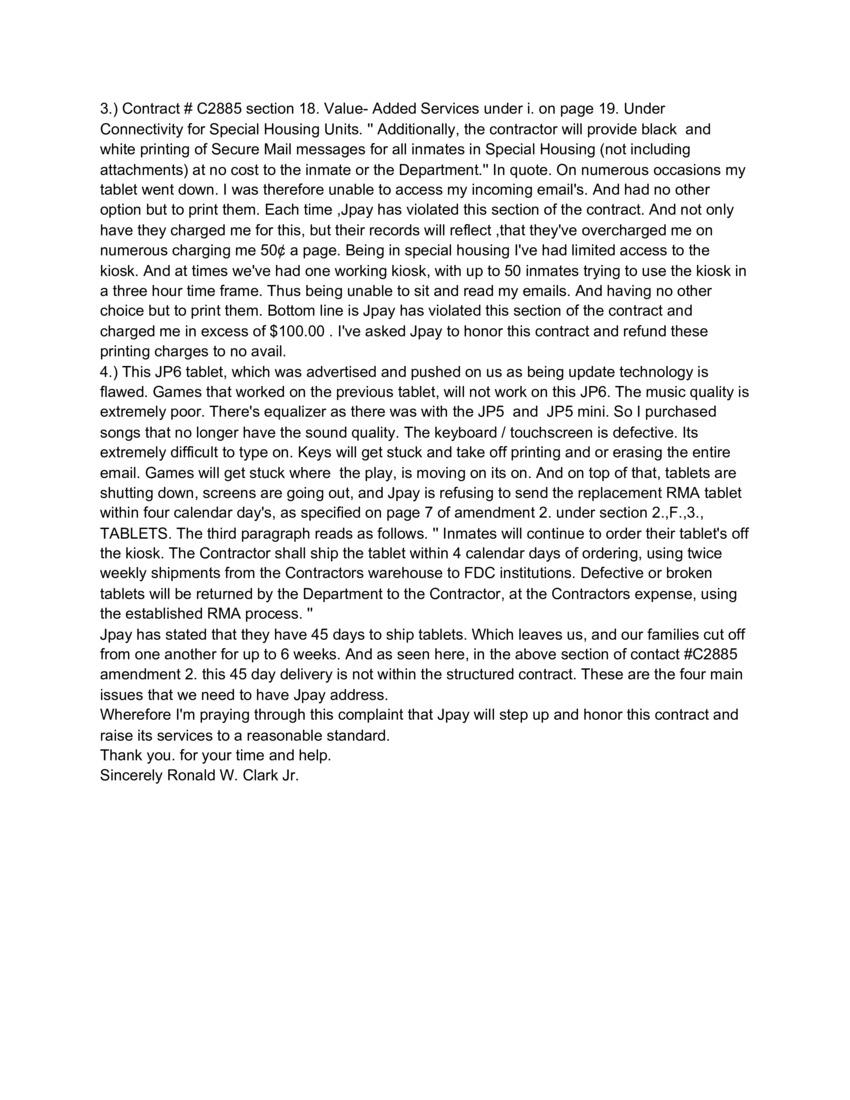 Jpay and the Florida Department of Corrections (FDC) entered into contract #C2885 on April 17, 2017. The contract has had two amendment's since the initial signing on November 15, 2019 and on June 30, 2020. In the initial contract you will find that the FDC used this procurement process on page 21 under section 2.,F., 18., d., to fund their phones and computer systems outside of legislative oversight. And are price gouging our family and friends who have just purchased all of these products such as the e-stamps, games, movies, music, etc. at excessive prices. We are paying over three times the price for e-stamps as other States like Washington and Michigan. And I'm sure your aware of the FDC and its shady and illegal contract negotiations, that sent former Secretary James V. Crosby Jr to Federal prison. That in and of itself, should be enough to keep the FDC from trying to fund any and all programs and services without legislative oversight. For the last thing the State of Florida needs, is the mere appearance of improper ties. Which is what we have here. The 4 main issues in this complaint are:
1.) Jpay and the FDOC sold us a JP5 tablet for $140.00 with the expectations of, it was our personal property through the duration of our confinement. In October of 2020 the FDOC passed out a memorandum, that stated all JP5 tablet's would be contraband as of November 30, 2020. They've refused to refund the money. With the promise of giving the tablet back upon our release. A lot of us like myself are never getting out. And those that do, would have no use of this outdated technology out there. And even if they allowed us to send it out, a lot of us have no one to send it to. On top of that, again its outdated technology that no one outside these prison walls would want. So I'm requesting a $140.00 refunds to my media account.
2.) Jpay has continued to violate contract #C2885 under section 8. b. Game's. on page 37 of the original contract and. page 36. of amendment 2. Games are not to exceed $7.99. Jpay is over charging us for numerous game's. One of the game's, 8 in 1 solitary was sold to me for $12.99. Constantine, Jydge, Neon Chrome and other's are being sold for $9.99. Thus Jpay is unequivocally in violation of the aforementioned contract and it's amendments. And therefore need's to refund every dollar that exceeded the $7.99 maximum price limit.
3.) Contract # C2885 section 18. Value- Added Services under i. on page 19. Under Connectivity for Special Housing Units. "Additionally, the contractor will provide black and white printing of Secure Mail messages for all inmates in Special Housing (not including attachments) at no cost to the inmate or the Department." In quote. On numerous occasions my tablet went down. I was therefore unable to access my incoming email's. And had no other option but to print them. Each time, Jpay has violated this section of the contract. And not only have they charged me for this, but their records will reflect, that they've overcharged me on numerous charging me 50¢ a page. Being in special housing I've had limited access to the kiosk. And at times we've had one working kiosk, with up to 50 inmates trying to use the kiosk in a three hour time frame. Thus being able to sit and read my emails. And having no other choice but to print them. Bottom line is Jpay has violated this section of the contract and refund these printing charges to no avail.
4.) This JP6 tablet, which was advertised and pushed on us as being update technology is flawed. Games that worked on the previous tablet, will not work on this JP6. The music quality is extremely poor. There's equaliser as there was with the JP5 and JP5 mini. So I purchased songs that no longer have the sound quality. The keyboard/touchscreen is defective. Its extremely difficult to type on. Keys will get stuck and take off printing and or erasing the entire email. Games will get stuck where the play, is moving on its on. And on top of that, tablets are shutting down, screens are going out, and Jpay is refusing to send the replacement RMA tablet within four calendar day's, as specified on page 7 of amendment 2. under section 2., F. 3., TABLETS. The third paragraph reads as follows. "Inmates will continue to order their tablet's off the kiosk. The Contractor shall ship the tablet within 4 calendar days of ordering, using twice weekly shipments from the Contractors warehouse to FDC institutions. Defective or broken tablets will be returned by the Department to the Contractor, at the Contractors expense, using the established RMA process."
Jpay has stated that they have 45 days to ship tablets. Which leaves us, and our families cut off from one another for up to 6 weeks. And as seen here, in the above section of contract #C2885 amendment 2. this 45 day deliver is not within the structured contract. These are the four main issues that we need to have Jpay address.
Wherefore I'm praying through this complaint that Jpay will step up and honour this contract and raise its services to a reasonable standard.
Thank you. for your time and help.
Sincerely Ronald W. Clark Jr.