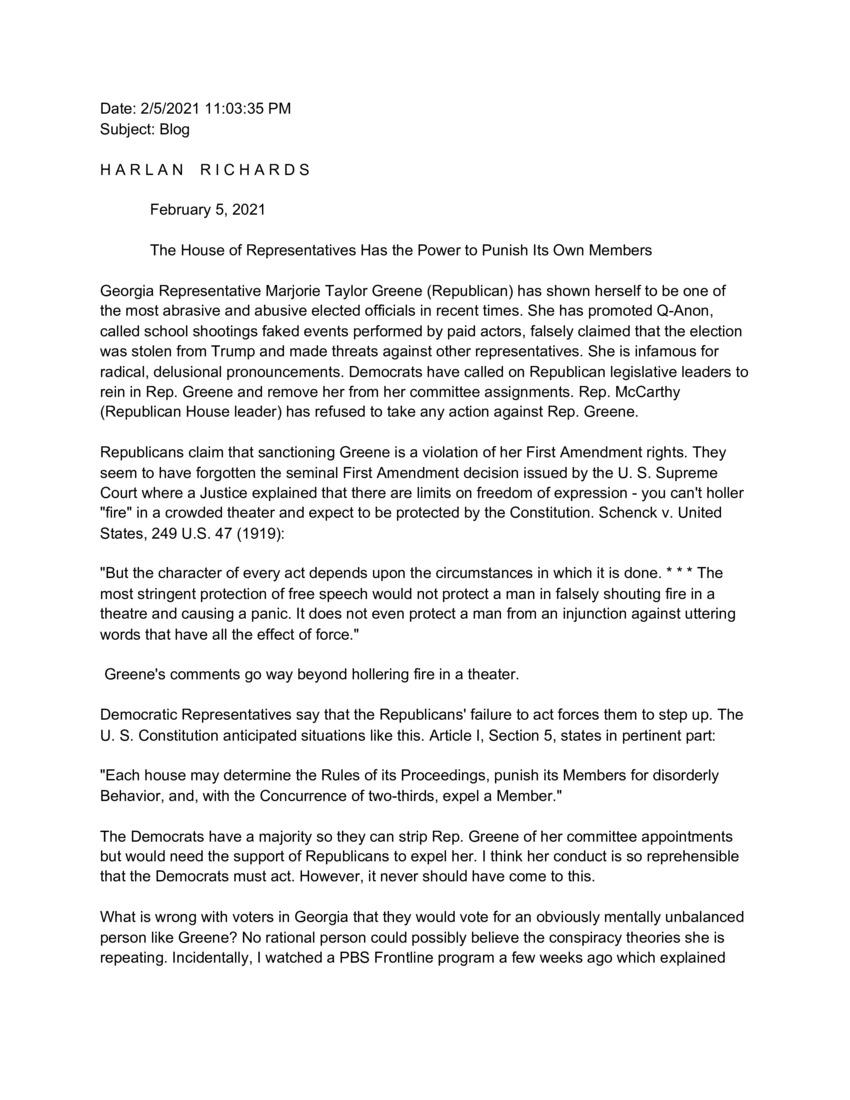 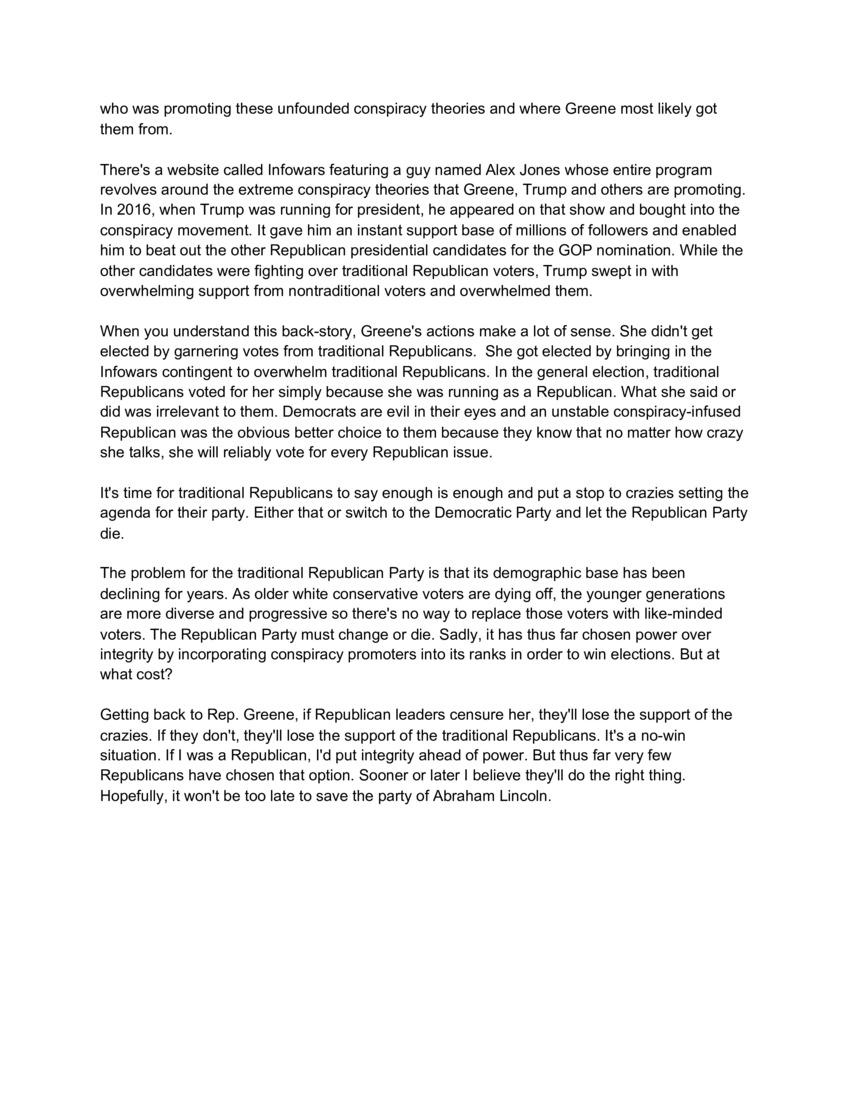 Georgia Representative Marjorie Taylor Greene (Republican) has shown herself to be one of the most abrasive and abusive elected officials in recent times. She has promoted Q-Anon, called school shootings faked events performed by paid actors, falsely claimed that the election was stolen from Trump and made threats against other representatives. She is infamous for radical, delusional pronouncements. Democrats have called on Republican legislative leaders to rein in Rep. Greene and remove her from her committee assignments. Rep. McCarthy (Republican House leader) has refused to take any action against Rep. Greene.

Republicans claim that sanctioning Greene is a violation of her First Amendment rights. They seem to have forgotten the seminal First Amendment decision issued by the U.S. Supreme Court where a Justice explained that there limits on freedom of expression - you can't holler "fire" a crowded theatre and expect to be protected by the Constitution. Schenck v. United States, 249 U.S. 47 (1919):

"But the character of every act depends upon the circumstances in which it is done. * * * The most stringent protection of free speech would not protect a man in falsely shouting fire in a theatre and causing a panic. It does not even protect a man from an injunction against uttering words that have all the effect of force."

Greene's comments go way beyond hollering fire in a theater.

Democratic Representatives say that the Republicans' failure to act forces them to step up. The U.S. Constitution anticipated situations like this. Article I, Section 5, states in pertinent part:

"Each house may determine the Rules of its Proceedings, punish its Members for disorderly Behavior, and, with the Concurrence of two-thirds, expel a Member."

The Democrats have a majority so they can strip Rep. Greene of her committee appointments but would need the support of Republicans to expel her. I think her conduct is so reprehensible that the Democrats must act. However, it never should have come to this.

What is wrong with voters in Georgia that they would vote for an obviously mentally unbalanced person like Greene? No rational person could possibly believe the conspiracy theories she is repeating. Incidentally, I watched a PBS Frontline program a few weeks ago which explained who was promoting these unfounded conspiracy theories and where Greene most likely got them from.

That's a website Infowars featuring a guy named Alex Jones whose entire program revolved around the extreme conspiracy theories that Greene, Trump and others are promoting. In 2016, when Trump was running for president, he appeared on that show and bought into the conspiracy movement. It gave him an instant support base of millions of followers and enabled him to beat out the other Republican presidential candidates for the GOP nomination. While the other candidates were fighting over traditional Republican voters, Trump swept in with overwhelming support from nontraditional voters and overwhelmed them.

It's time for traditional Republicans to say enough is enough and put a stop to crazies setting the agenda for their party. Either that or switch to the Democratic Party and let the Republican Party die.

The problem for the traditional Republican Party is that its demographic base has been declining for years. As older white conservative voters are dying off, the younger generations are more diverse and progressive so there's no way to replace those voters with like-minded voters. The Republican Party must change or die. Sadly, it has thus far chosen power over integrity by incorporating conspiracy promoters into its rank in order to win elections. But at what cost?