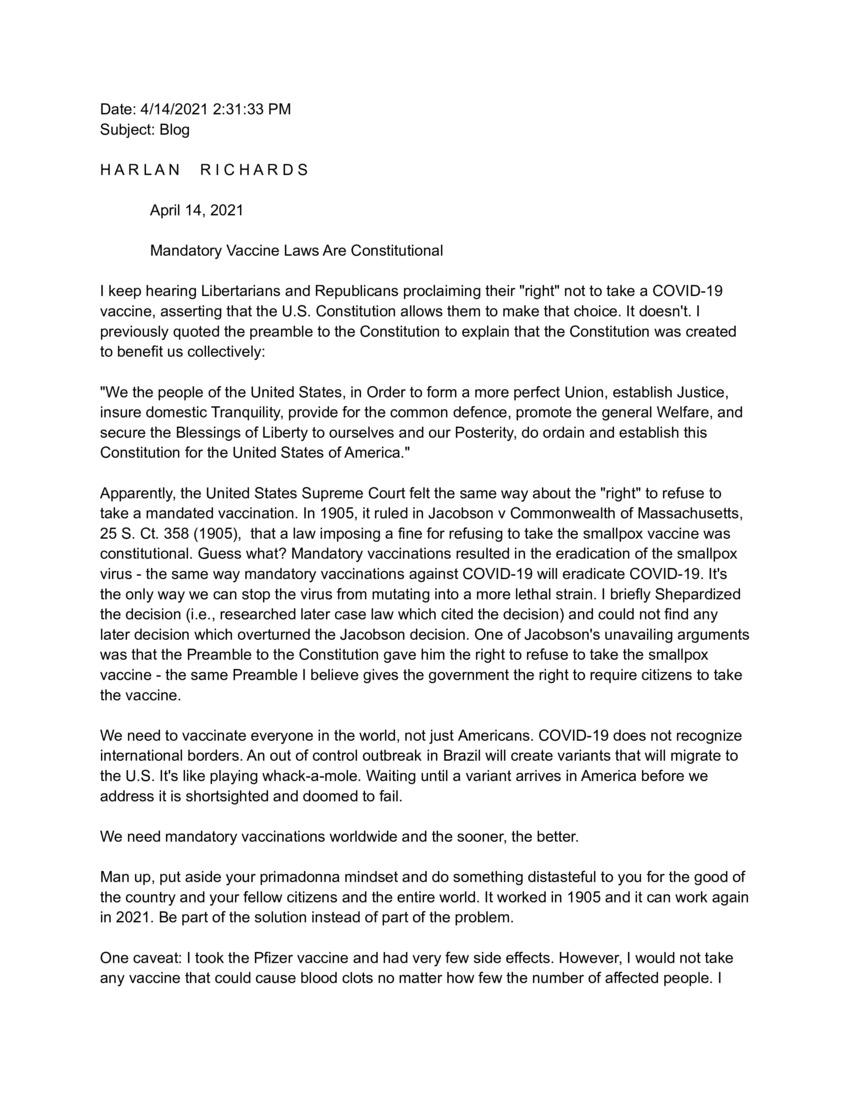 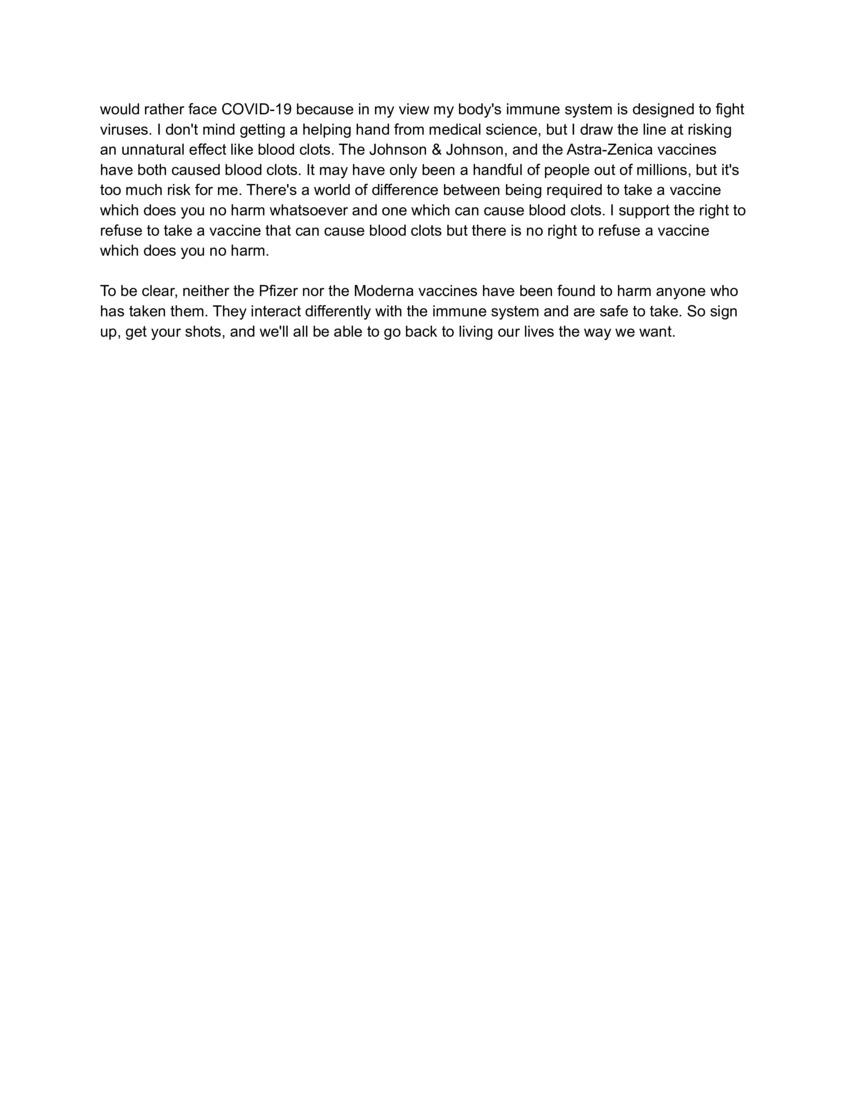 I keep hearing Libertarians and Republicans proclaiming their "right" not to take a COVID-19 vaccine, asserting that the U.S. Constitution allows them to make that choice. It doesn't. I previously quoted the preamble to the Constitution to explain that the Constitution was created to benefit us collectively:

"We the people of the United States, in Order to form a more perfect Union, establish Justice, insure domestic Tranquility, provide for the common defense, promote the general Welfare, and secure the Blessings of Liberty to ourselves and our Posterity, do ordain and establish this Constitution for the United States of America."

Apparently, the United States Supreme Court felt the same way about the "right" to refuse to take a mandated vaccination. In 1905, it ruled in Jacobson v Commonwealth of Massachusetts, 25 S. Ct. 358 (1905), that a law imposing a fine for refusing to take the smallpox vaccine was constitutional. Guess what? Mandatory vaccines resulted in the eradication of the smallpox virus - the same way mandatory vaccinations against COVID-19 will eradicate COVID-19. It's the only way we can stop the virus from mutating into a more lethal strain. I briefly Shepardized the decision (i.e., researched later case law which cited the decision) and could not find any later decision which overturned the Jacobson decision. One of Jacobson's unavailing arguments was that the Preamble to the Constitution gave him the right to refuse to take the smallpox vaccine - the same Preamble I believe gives the government the right to require citizens to take the vaccine.

We need to vaccinate everyone in the world, not just Americans. COVID-19 does not recognize international borders. An out of control outbreak in Brazil will create variants that will migrate to the U.S. It's like playing whack-a-mole. Waiting until a variant arrives in America before we address it is shortsighted and doomed to fail.

We need mandatory vaccinations worldwide and the sooner, the better.

Man up, put aside your primadonna mindset and do something distasteful to you for the good of the country and your fellow citizens and the entire world. It worked in 1905 and it can work again in 2021. Be part of the solution instead of part of the problem.

One caveat: I took the Pfizer vaccine and had very few side effects. However, I would not take any vaccine that could cause blood clots no matter how few the number of affected people. I would rather face COVID-19 because in my view my body's immune system is designed to fight viruses. I don't mind getting a helping hand from medical science, but I draw the line at risking an unnatural effect like blood clots. The Johnson & Johnson, and the Astra-Zeneca vaccines have both caused blood clots. It may have only been a handful of people out of millions, but it's too much risk for me. There's a world of difference between being required to take a vaccine which does you no harm whatsoever and one which can cause blood clots. I support the right to refuse to take a vaccine that can cause blood clots but there is no right to refuse a vaccine which does you no harm.

To be clear, neither the Pfizer nor the Moderna vaccines have been found to harm anyone who has taken them. They interact differently with the immune system and are safe to take. So sign up, get your shots, and we'll all be able to go back to living our lives the way we want.