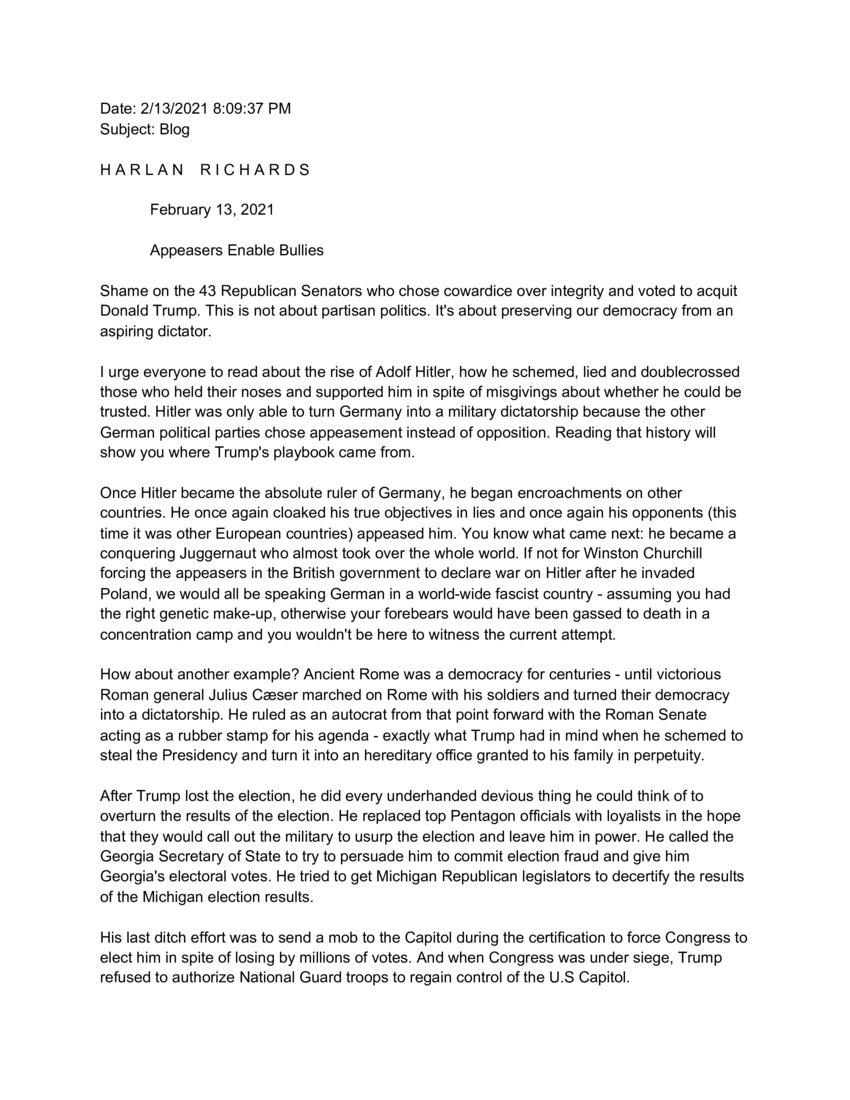 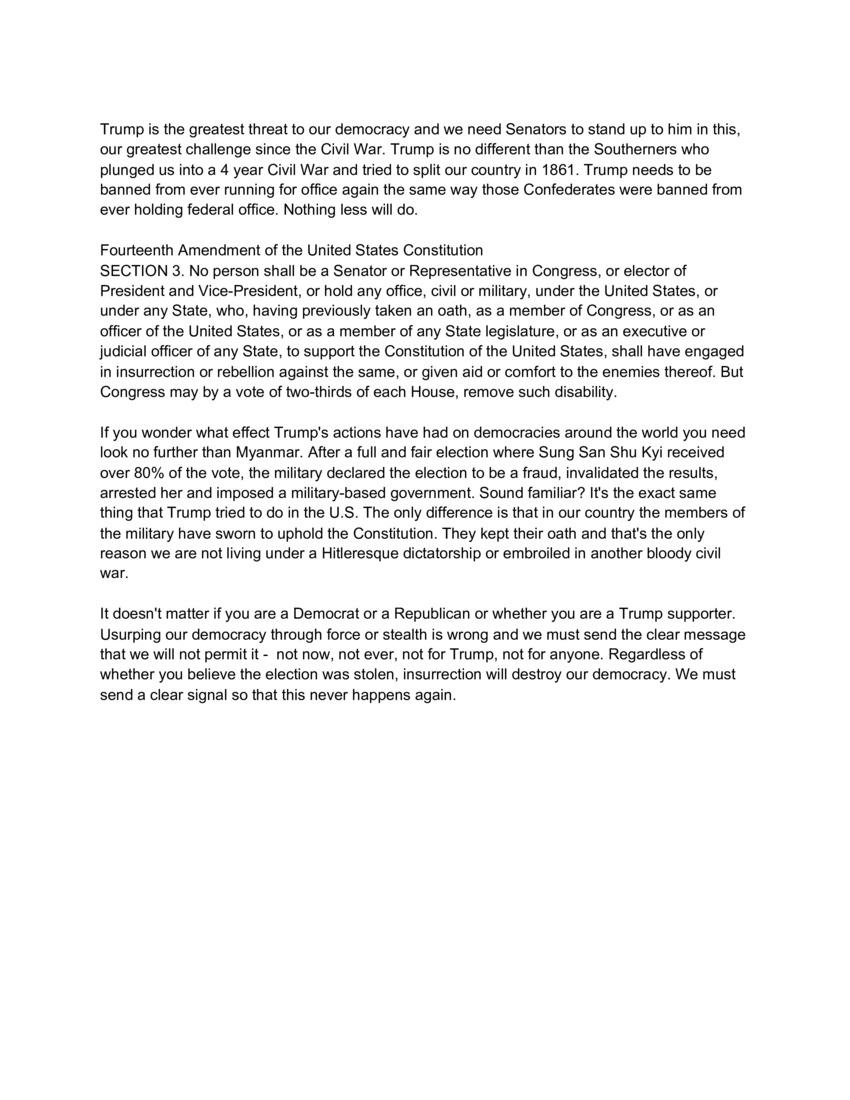 Shame on the 43 Republican Senators who chose cowardice over integrity and voted to acquit Donald Trump. This is not about partisan politics. It's about preserving our democracy from an aspiring dictator.

I urge everyone to red about the rise of Adolf Hitler, how he schemed, lied and double-crossed whose who held their noses and supported him in spite of misgivings about whether he could be trusted. Hitler was only able to turn Germany into a military dictatorship because the other German political parties chose appeasement instead of opposition. Reading that history will show you where Trump's playbook came from.

Once Hitler became the absolute ruler of Germany, he began encroachments on other countries. He once again cloaked his true objectives in lies and once again his opponents (this time it was other European countries) appeased him. You know what came next: he became a conquering Juggernaut who almost took over the whole world. If not for Winston Churchill forcing the appeasers in the British government to declare war on Hitler after he invaded Poland, we would all be speaking German in a world-wide fascist country - assuming you had the right genetic make-up, otherwise your forebears would have been gassed to death in a concentration camp and you wouldn't be here to witness the current attempt.

How about another example? Ancient Rome was a democracy for centuries - until victorious Roman general Julius Caesar marched on Rome with his solders and turned their democracy into a dictatorship. He ruled as an autocrat from that point forward with the Roman Senate acting as a rubber stamp for his agenda - exactly what Trump had in mind when he schemed to steal the Presidency and turn it into an hereditary office granted to his family in perpetuity.

After Trump lost the election, he did every underhanded devious thing he could think of to overturn the results of the election. He replaced top Pentagon officials with loyalists in the hope that they would call out the military to usurp the election and leave him in power. He called the Georgia Secretary of State to try to persuade him to commit election fraud and give him Georgia's electoral votes. He tried to get Michigan Republican legislators to decertify the results of the Michigan election results.

His last ditch effort was to send a mob to the Capitol during the certification to force Congress to elect him in spite of losing by millions of votes. And when Congress was under siege, Trump refused to authorize National Guard troops to regain control of the U.S. Capitol.

Trump is the greatest threat to our democracy and we need Senators to stand up to him in this, our greatest challenge since the Civil War. Trump is no different than the Southerners who plunged us into a 4 year Civil War and tried to split our country in 1861. Trump needs to be banned from ever running for office again the same way those Confederates were banned from ever holding federal office. Nothing less will do.

If you wonder what effect Trump's actions have had on democracies around the world you need look no further than Myanmar. After a full and fair election where Sung San Shu Kyi received over 80% of the vote, the military declared the election to be a fraud, invalidated the results, arrested her and imposed a military-based government. Sound familiar? It's the exact same thing that Trump tried to do in the U.S. The only difference is that in our country the members of the military have sworn to uphold the Constitution. They kept their oath and that's the only reason we are not living under a Hilteresque dictatorship or embroiled in another bloody civil war.

It doesn't matter if you are a Democrat or a Republican or whether you are a Trump supporter. Usurping our democracy through force or stealth is wrong and we must send the clear message that we will not permit it - not now, not ever, not for Trump, not for anyone. Regardless of whether you believe the election was stolen, insurrection will destroy our democracy. We must send a clear signal so that this never happens again.