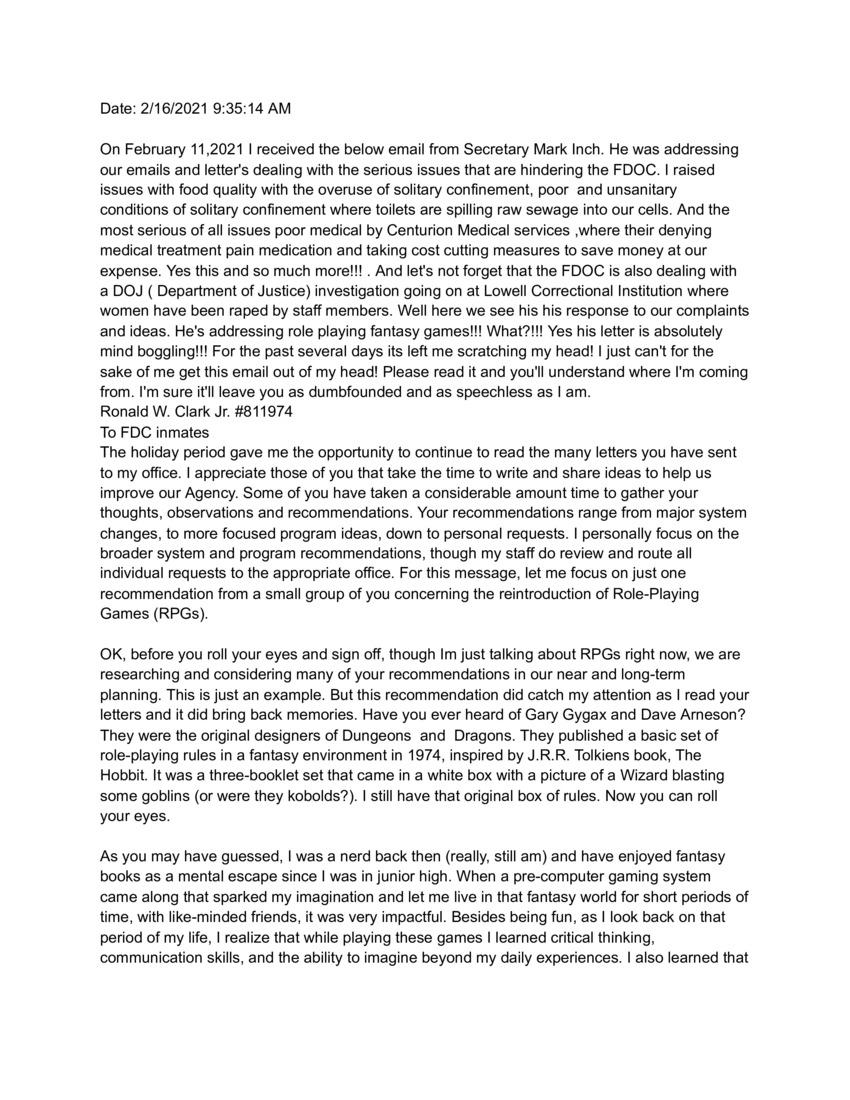 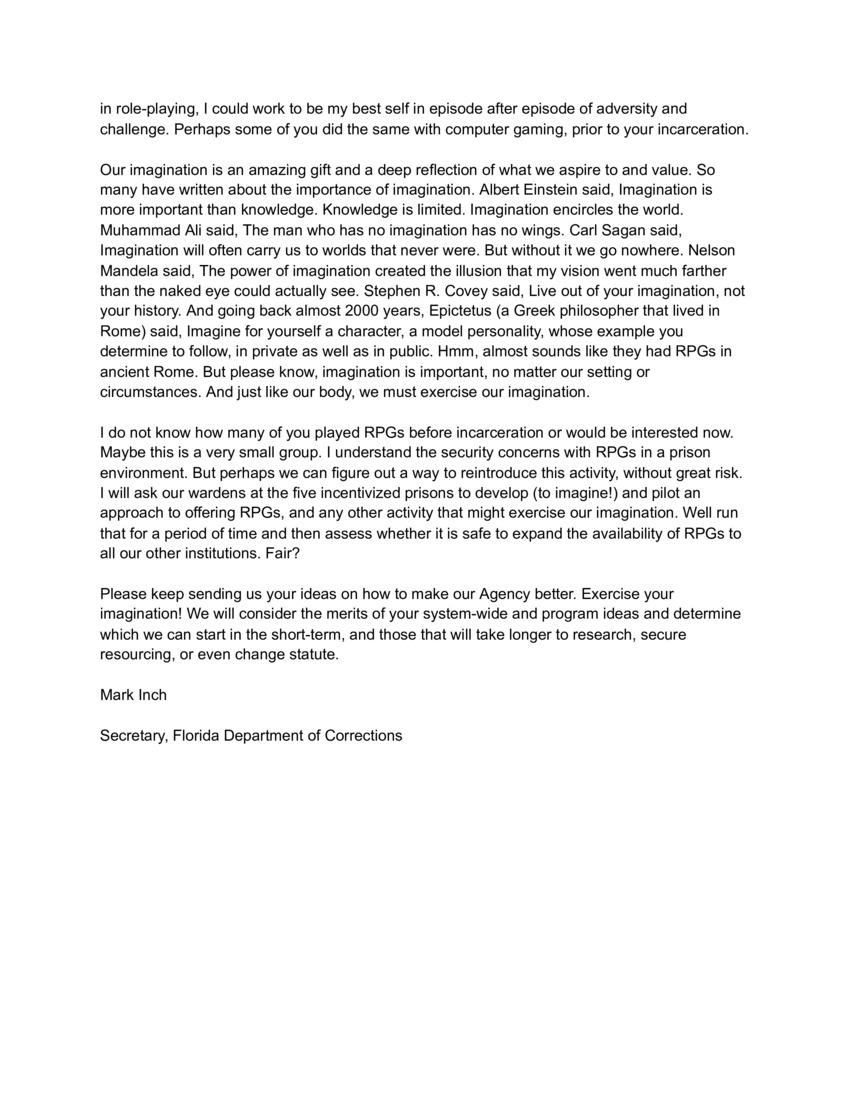 On February 11,2021 I received the below email from Secretary Mark Inch. He was addressing our emails and letter's dealing with the serious issues that are hindering the FDOC. I raised issues with food quality with the overuse of solitary confinement, poor and unsanitary conditions of solitary confinement where toilets are spilling raw sewage into our cells. And the most serious of all issues poor medical by Centurion Medical services, where their denying medical treatment pain medication and taking cost cutting measures to save money at our expense. Yes this and so much more!!! And let's not forget that the FDOC is also dealing with a DOJ (Department of Justice) investigation going on at Lowell Correctional Institution where women have been raped by staff members. Well here we see his response to our complaints and ideas. He's addressing role playing fantasy games!!! What?!!! Yes his letter is absolutely mind boggling!!! For the past several days its left me scratching my head! I just can't for the sake of me get this email out of my head! Please read it and you'll understand where I'm coming from. I'm sure it'll leave you as dumbfounded and as speechless as I am.

Ronald W. Clark Jr. #811974
To FDC inmates
The holiday period gave me the opportunity to continue to read the many letters you have sent to my office. I appreciate those of you that take the time to write and share ideas to help us improve our Agency. Some of you have taken a considerable amount time to gather your thoughts, observations and recommendations. Your recommendations range from major system changes, to more focused program ideas, down to personal requests. I personally focus on the broader system and program recommendations, though my staff do review and route all the individual requests to the appropriate office. For this message, let me focus on just one recommendation from a small group of you concerning the reintroduction of Role-Playing Games (ROGs)

OK, before you roll your eyes and sign off, though I'm just talking about RPGs right now, we are researching and considering many of you're recommendations in our near and long-term planning. This is just an example. But this recommendation did catch my attention as I read your letters and it did bring back memories. Have you ever heard of Gary Gygax and Dave Arneson? They were the original designers of Dungeons and Dragons. They published a basic set of role-playing rules in a fantasy environment in 1974, inspired by J.R.R. Tolkiens book, The Hobbit. It was a three-booklet set that came in a white box with a picture of a Wizard blasting some goblins (or were they kobolds?). I still have that original box of rules. now you can roll your eyes.

As you may have guessed, I was a nerd back then (really, still am) and have enjoyed fantasy books as a mental escape since I was in junior high. When a pre-computer gaming system came along that sparked my imagination and let me live in that fantasy world for short periods of time, with like-minded friends, it was very impactful. Besides being fun, as I look back on that period of my life, I realize that while playing these games I learned critical thinking, communication skills, and the ability to imagine beyond my daily experiences. I also learned that in role-playing, I could work to be my best self in episode after episodes of adversity and challenge. Perhaps some of you did the same with computer gaming, prior to your incarceration.

Our imagination is an amazing gift and a deep reflection of what we aspire to and value. So many have written about the importance of imagination. Albert Einstein said, Imagination is more important than knowledge. Knowledge is limited. Imagination encircles the world. Muhammad Ali said, The man who has no imagination has no wings. Carl Sagan said, Imagination will often carry us to worlds that never were. But without it we go nowhere. Nelson Mandela said, The power of imagination created the illusion that my vision went much farther than the naked eye could actually see. Stephen R. Covey said, Live out of your imagination, not your history. And going back almost 2000 years, Epictetus (a Greek philosopher that lived in Rome) said, Imagine for yourself a character, a model personality, whose example you determine to follow, in private as well as in public. Hmm, almost sounds like they had RPGs in circumstances. And just like our body, we must exercise our imagination.

I do not know how many of your played RPGs before incarceration or would be interested now. Maybe this is a very small group. I understand the security concerns with RPGs in a prison environment. But perhaps we can figure out a way to reintroduce this activity, without great task. I will ask our wardens at the five incentivized prisons to develop (to imagine!) and pilot an approach to offering RPGs, and any other activity that might exercise our imagination. Well run that for a period of time and then assess whether it is safe to expand the availability of RPGs to all out institutions. Fair?

Please keep sending us your ideas on how to make our Agency better. Exercise your imagination! We will consider the merits of your system-wide and program ideas and determine which we can start in the short-term, and those that will take longer to research, secure resourcing, or even change statute.