The Daily Struggles of Solitary Confinement 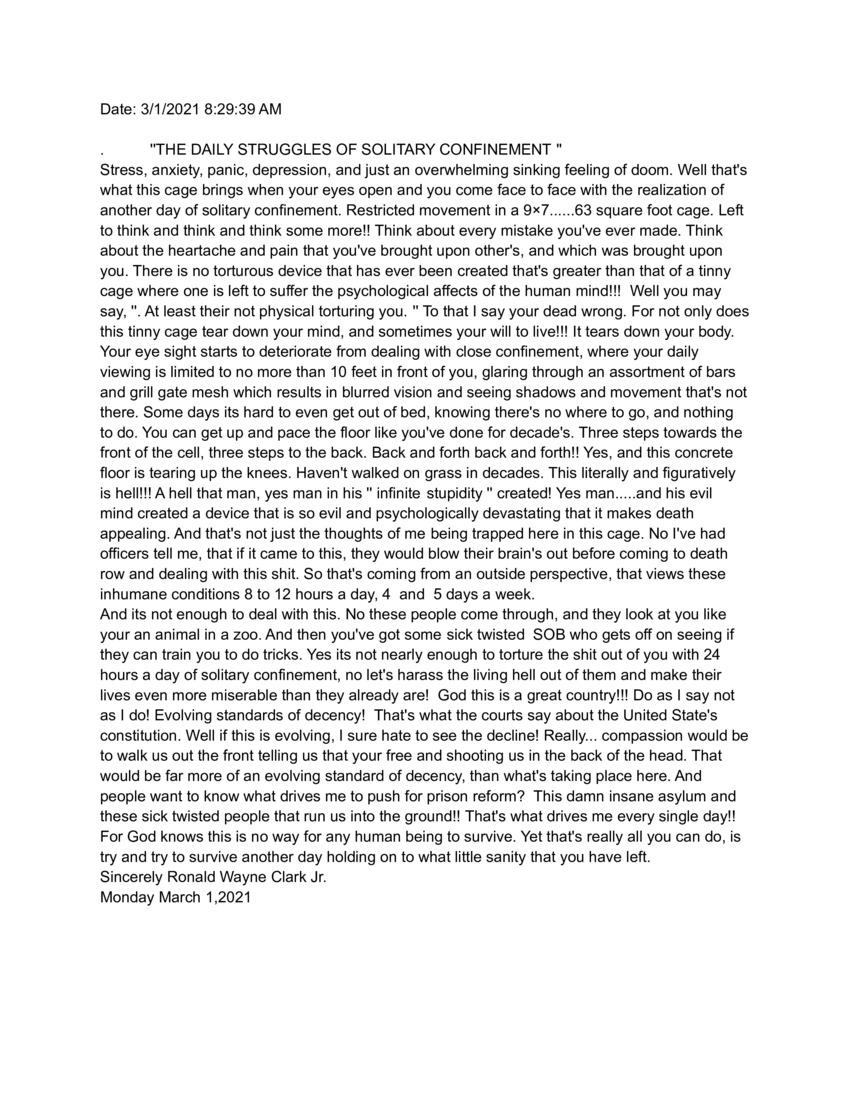 Date: 3/1/2021 8:29:39 AM
"THE DAILY STRUGGLES OF SOLITARY CONFINEMENT"
Stress, anxiety, panic, depression, and just an overwhelming sinking feeling of doom. Well that's what this cage brings when your eyes open and you come face to face with the realization of another day of solitary confinement. Restricted movement in a 9x7......63 square foot cage. Left to think and think and think some more!! Think about every mistake you've ever made. Think about the heartache and pain that you've brought upon other's, and which was brought upon you. There is no torturous device that has ever been created that's greater than that of a tinny cage where one is left to suffer the psychological affects of the human mind!!! Well you may say, ".At least their not psychical torturing you. "To that I say your dead wrong. For not only does this tinny cafe tear down your mind, and sometimes your will to live!!! It tears down your body. Your eye sight starts to deteriorate from dealing with close confinement, where your daily viewing is limited to no more than 10 feet in front of you, glaring through an assortment of bars and grill gate mesh which results in blurred vision and seeing shadows and movement that's not there. Some days its hard to even get out of bed, knowing there's no where to go, and nothing to do. You can get up and pace the floor like you've done for decades. This literally and figuratively is hell!!! A hell that man, yes man is his "infinite stupidity" has created! Yes man... and his evil mind created a device that is so evil and psychologically devastating that it makes death appealing. And that's not just the thoughts or me being trapped here in this cage. No I've had officers tell me, that if it came to this, they would blow their brain's out before coming to death row and dealing with this shit. So that's coming from an outside perspective, that views these inhumane conditions 8 to 12 hours a day, 4 and 5 days a week.
AND its not enough to deal with this. No these people come through, and they look at you like your an animal in a zoo. And then you've got some sick twisted SOB who gets off on seeing if they can train you to do tricks. Yes its not nearly enough to torture the shit out of you with 24 hours a day of solitary confinement, no let's harass the living hell out of them and make their lives even more miserable than they already are! God this is a great country!!! Do as I say not as I do! Evolving standards of decency! That's what the courts say about the United State's constitution. Well if this evolving, I sure hate to see the decline! Really... compassion would be to walk us out the front telling us that your free and shooting us in the back of the head. That would be far more of an evolving standard of decency, than what's taking place here. And people want to know what drives me to push for prison reform? This damn insane asylum and these sick twisted people that run us into the ground!! That's what drives me every single day!! FOr God knows this is no way fo any human being to survive. Yet that's really all you can do, is try and try to survive another day holding on to what little sanity that you have left.
Sincerely Ronald Wayne Clark Jr.
Monday March 1, 2021