Want to work for the FDOC? 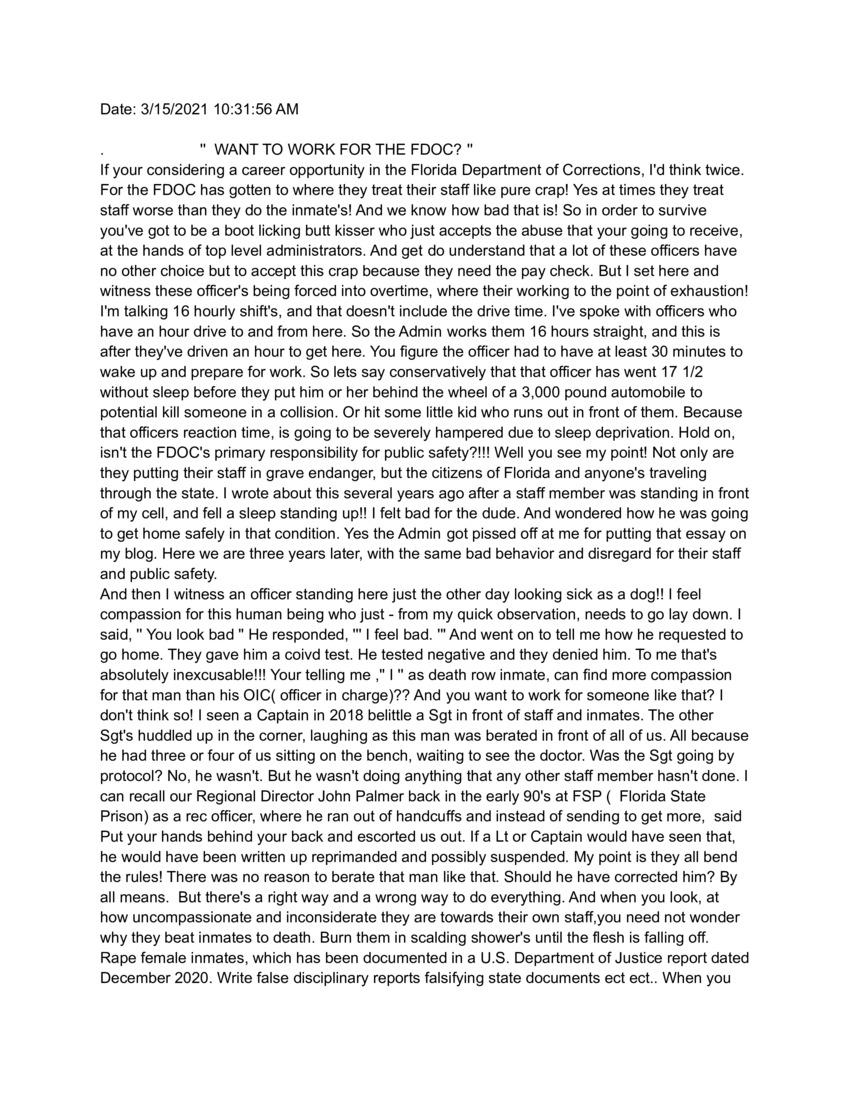 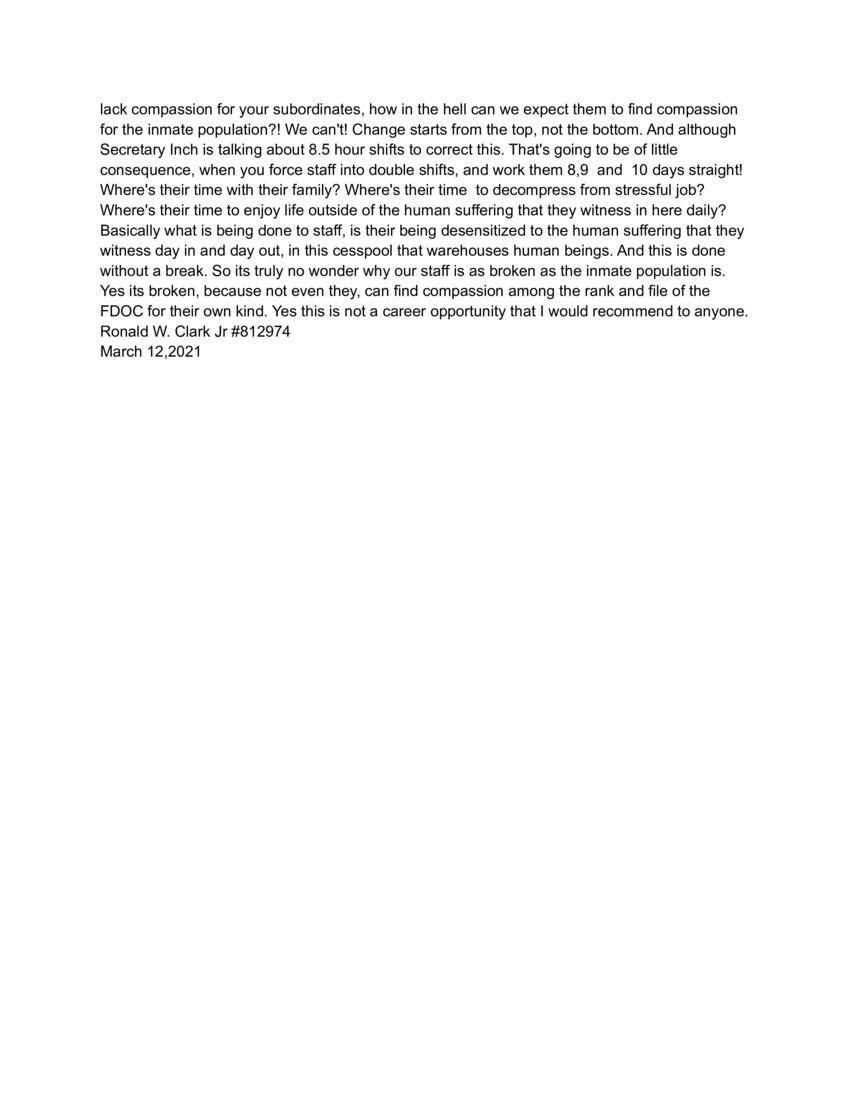 " WANT TO WORK FOR THE FDOC?"
If you're considering a career opportunity in the Florida Department of Corrections, I'd think twice. For the FDOC has gotten to where they treat their staff like pure crap! Yes at times they treat staff worse than they do the inmates! And we know how bad that is! So in order to survive you've got to be a boot licking butt kisser who just accepts the abuse that your going to receive, at the hands of top level administrators. And get do understand that a lot of these officers have no other choice but to accept this crap because they need the paycheck. But I set here and witness these officer's being forced into overtime, where they're working to the point of exhaustion! I'm talking 16 hourly shifts, and that doesn't include the drive time. I've spoke with officers who have an hour drive to and from here. So the Admin works them 16 hours straight, and this is after they've driven an hour to get here. You figure the officer had to have at least 30 minutes to wake up and prepare for work. So let's say conservatively that that officer has went 17 1/2 without sleep before they put him or her behind the wheel of a 3,000 pound automobile to potential kill someone in a collision. Or hit some little kid who runs out in front of them. Because that officers reaction time, is going to be severely hampered due to sleep deprivation. Hold on, isn't the FDOC's primary responsibility for public safety?!!! Well you see my point! Not only are they putting their staff in grave endanger, but the citizens of Florida and anyone's traveling through the state. I wrote about this several years ago after a staff member was standing in front of my cell, and fell asleep standing up!! I felt bad for the dude. And wondered how he was going to get home safely in that condition. Yes the Admin got pissed off at me for putting that essay on my blog. Here we are three years later, with the same bad behavior and disregard for their staff and public safety.
And then I witness an officer standing here just the other day looking sick as a dog!! I feel compassion for this human being who just - from my quick observation, needs to go lay down. I said, "You look bad" He responded, 'I feel bad. "And went on to tell me how he requested to go home. They gave him a covid test. He tested negative and they denied him. To me that's absolutely inexcusable!!! You're telling me," "as death row inmate, can find more compassion for that man than his OIC( officer in charge)?? And you want to work for someone like that? don't think so! I seen a Captain in 2018 belittle a Sgt in front of staff and inmates. The other Sgt's huddled up in the corner, laughing as this man was berated in front of all of us. All because he had three or four of us sitting on the bench, waiting to see the doctor. Was the Sgt going by protocol? No, he wasn't. But he wasn't doing anything that any other staff member hasn't done. I can recall our Regional Director John Palmer back in the early 90's at FSP ( Florida State Prison) as a rec officer, where he ran out of handcuffs and instead of sending to get more, said Put your hands behind your back and escorted us out. If a Lt or Captain would have seen that, he would have been written up reprimanded and possibly suspended. My point is they all bend the rules! There was no reason to berate that man like that. Should he have corrected him? By all means. But there's a right way and a wrong way to do everything. And when you look, at how uncompassionate and inconsiderate they are towards their own staff you need not wonder why they beat inmates to death. Burn them in scalding shower's until the flesh is falling off. Rape female inmates, which has been documented in a U.S. Department of Justice report dated December 2020. Write false disciplinary reports falsifying state documents etc ect.. When you lack compassion for your subordinates, how in the hell can we expect them to find compassion for the inmate population?! We can't! Change starts from the top, not the bottom. And although Secretary Inch is talking about 8.5 hour shifts to correct this. That's going to be of little consequence, when you force staff into double shifts, and work them 8,9 and 10 days straight! Where's their time with their family? Where's their time to decompress from stressful job? Where's their time to enjoy life outside of the human suffering that they witness in here daily? Basically what is being done to staff, is their being desensitized to the human suffering that they witness day in and day out, in this cesspool that warehouses human beings. And this is done without a break. So it's truly no wonder why our staff is as broken as the inmate population is.
Yes it's broken, because not even they, can find compassion among the rank and file of the FDOC for their own kind. Yes this is not a career opportunity that I would recommend to anyone.
Ronald W. Clark Jr #812974
March 12, 2021