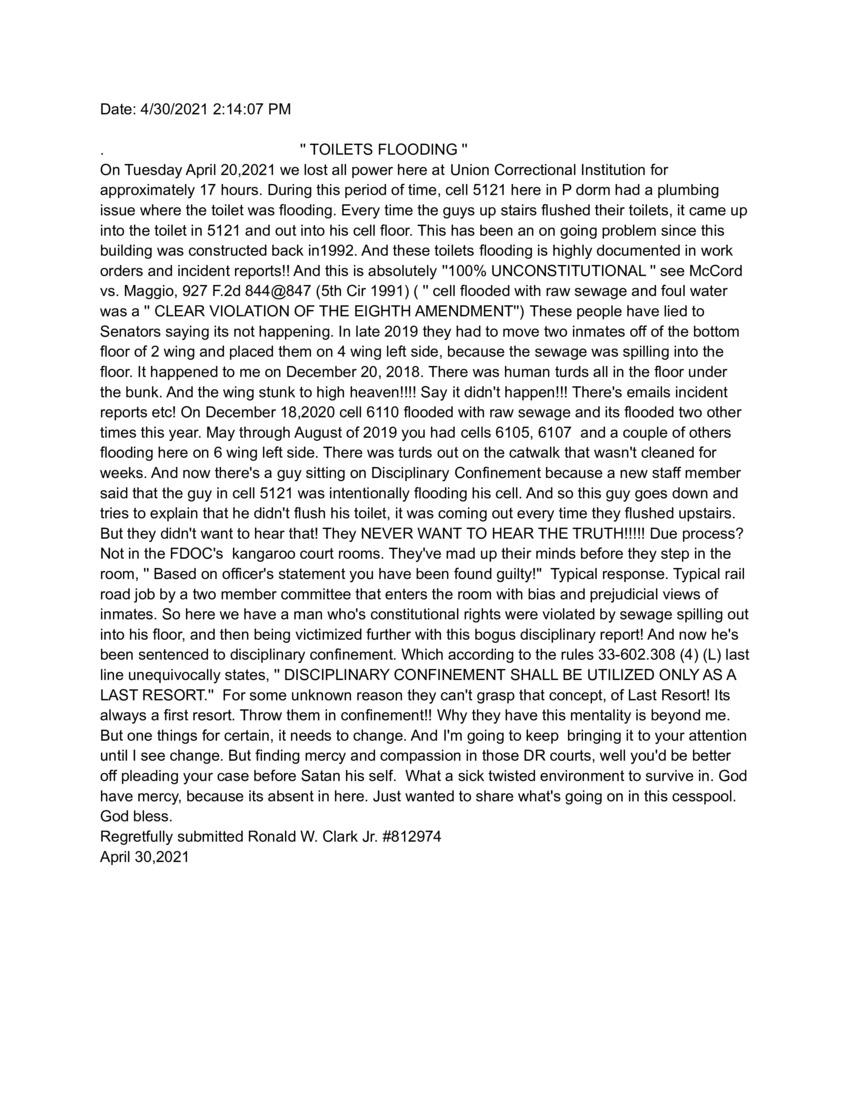 On Tuesday April 20, 2021 we lost all power here at Union Correctional Institution for approximately 17 hours. During this period of time, cell 5121 here in P dorm had a plumbing issue where the toilet was flooding. Every time the guys up stairs flushed their toilets, it came up into the toilet in 5121 and out into his cell floor. This has been an on going problem since this building was constructed back in 1992. And these toilets flooding is highly documented in work orders and incident reports!! And this is absolutely "100% UNCONSTITUTIONAL" see McCord vs. Maggio, 927 F.2d 844@847 (5th Cir 1991) ("cell flooded with raw sewage and foul water was a "CLEAR VIOLATION OF THE EIGHTH AMENDMENT") These people have lied to Senators saying its not happening/ In late 2019 they had to move two inmates off of the bottom floor of 2 wing and placed them on 4 wing left side, because the sewage was spilling into the floor. It happened to me on December 20, 2018. There was human turds all in the floor under the bunk. And the wing stunk to high heaven!!!! Say it didn't happen!!! There's emails incident reports etc! On December 18, 2020 cell 6110 flooded with raw sewage and its flooded two other times this year. May through August of 2019 you had cells 6105, 6107 and a couple of others flooding here on 6 wing left side. There was turds on the catwalk that wasn't cleaned for weeks. And now there's a guy sitting on Disciplinary Confinement because a new staff member said that the guy in cell 5121 was intentionally flooding his cell. And so this guy goes down and tries to explain that he didn't flush his toilet, it was coming out every time they flushed upstairs. But they didn't want to hear that! They NEVER WANT TO HEAR THE TRUTH!!!!! Due process? Not in the FDOC's kangaroo court rooms. They've mad up their minds before they step in the room, "Based on officer's statement you have been found guilty!" Typical response. Typical rail road job be a two member committee that enters the room with bias and prejudicial views of inmates. So here we have a man who's constitutional rights were violated by sewage spilling out into his floor, and then being victimized further with this bogus disciplinary report! And now he's been sentenced to disciplinary confinement. Which according to the rules 33-602.308 (4) (L) last line unequivocally states, "DISCIPLINARY CONFINEMENT SHALL BE UTILIZED ONLY AS A LAST RESORT." For some unknown reason they can't grasp that concept, of Last Resort! its always a first resort. Throw them in confinement!! Why they have this mentality is beyond me. But one things for certain, it needs to change. And I'm going to keep bringing it to your attention until I see change. But finding mercy and compassion in those DR courts, well you'd be better off pleading your case before Satan his self. What a sick twisted environment to survive in. God have mercy, because its absent in here. Just wanted to share what's going on in this cesspool. God bless.