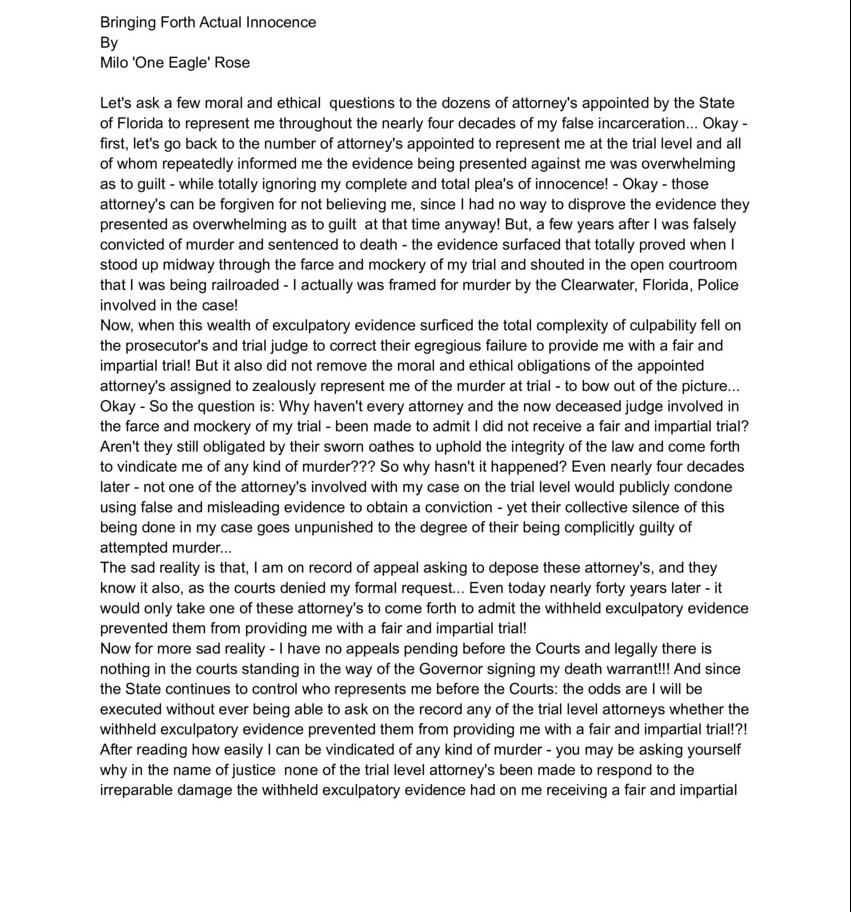 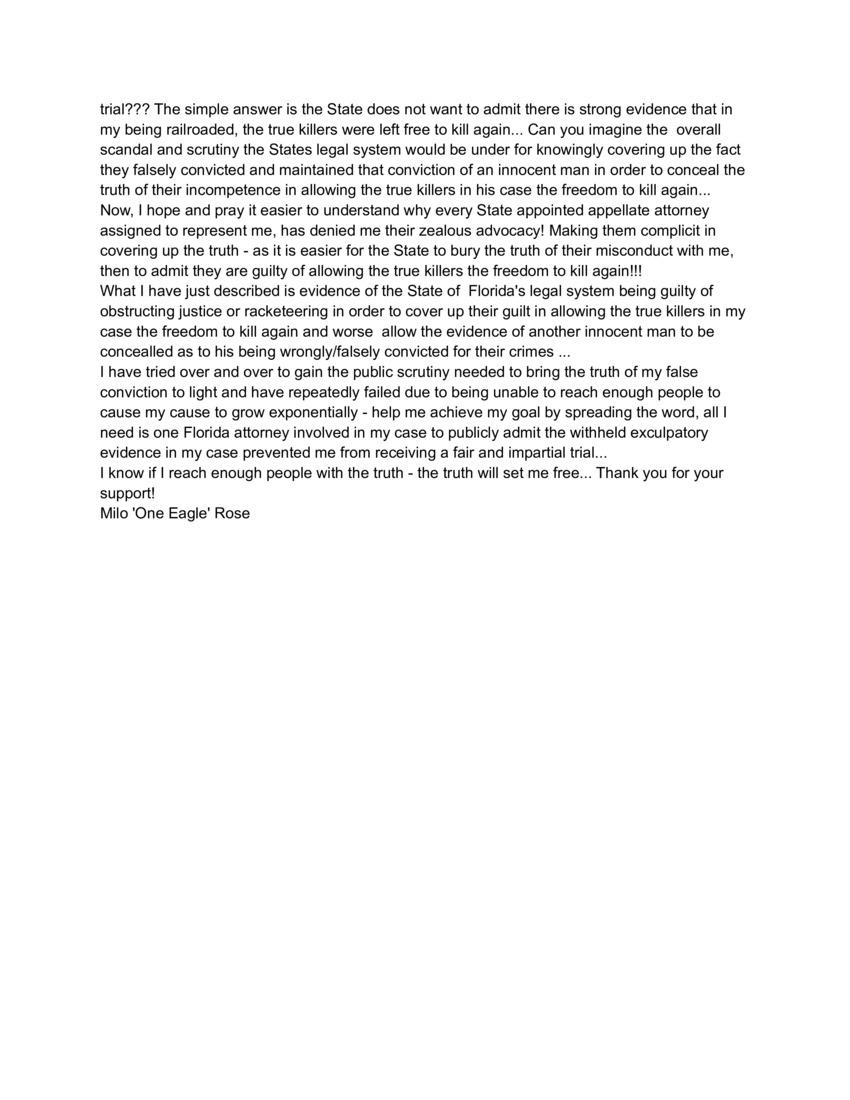 Bringing Forth Actual Innocence
By
Milo 'One Eagle' Rose

Let's ask a few moral and ethical questions to the dozens of attorneys appointed by the State of Florida to represent me throughout the nearly four decades of my false incarceration... Okay - first, let's go back to the number of attorneys appointed to represent me at the trial level and all of whom repeatedly informed me that evidence being presented against me was overwhelming as to guilt - while totally ignoring my complete and total pleas of innocence! - Okay - those attorneys can be forgiven for not believing me, since I had no way to disprove the evidence they presented as overwhelming as to guilt at that time anyway! But, a few years after I was falsely convicted of murder and sentenced to death - the evidence surfaced that totally proved when I stood up midway through the farce and mockery of my trial and shouted in the open courtroom that I was being railroaded - I actually was framed for murder by the Clearwater, Florida, Police involved in the case!

Now, when this wealth of exculpatory evidence surfaced the total complexity of culpability fell on the prosecutors and trial judge to correct their egregious failure to provide me with a fair and impartial trial! But it also did not remove the moral and ethical obligations and the appointed attorney's assigned to zealously represent me of the murder at trial - to bow out of the picture... Okay - So the question is: Why haven't every attorney and the now deceased judge involved in the farce and mockery of my trial - been made to admit I did not receive a fair and impartial trial? Aren't they obligated by their sworn oaths to uphold the integrity of the law and come forth to vindicate me of any kind of murder??? So why hasn't it happened? Even nearly four decades later - not one of the attorneys involved with my case on the trial level would publicly condone using false and misleading evidence to obtain a conviction - yet their collective silence of this being done in my case goes unpunished to the degree of their being complicitly guilty of attempted murder...

The sad reality is that, I am on record of appeal asking to depose these attorneys, and they know it also, as the courts denied my formal request... Even today nearly forty years later - it would only take one of these attorneys to come forth to admit the withheld exculpatory evidence prevented them from providing me with a fair and impartial trial!

Now for more sad reality - I have no appeals pending before the Courts and legally there is nothing in the courts standing in the way of the Governor signing my death warrant!!! And since the State continues to control who represents me before the Courts: the odds are I will be executed without ever being able to ask on the record any of the trial level attorneys whether the withheld exculpatory evidence prevented them from providing me with a fair and impartial trial?! After reading how easily I can be vindicated of any kind of murder - you may be asking yourself why in the name of justice none of the trial level attorneys been made to respond to the irreparable damage the withheld exculpatory evidence had on me receiving a fair and impartial trial??? The simple answer is the State does not want to admit there is strong evidence that in my being railroaded, the true killers were left free to kill again... Can you imagine the overall scandal and scrutiny the State's legal system would be under for knowingly covering up the fact they falsely convicted and maintained the conviction of an innocent man in order to conceal the truth of their incompetence in allowing the true killers in his case the freedom to kill again... Now, I hope and pray it easier to understand why every State appointed appellate attorney assigned to represent me, has denied me their zealous advocacy! Making them complicit in covering up the truth - as it is easier for the State to bury the truth of their misconduct with me, than to admit they are guilty of allowing the true killers the freedom to kill again!!!

What I have just described is evidence of the State of Florida's legal system being guilty of obstructing justice or racketeering in order to cover up their guilt in allowing the true killers in my case the freedom to kill again and worse allow the evidence of another innocent man to be concealed as to his being wrongly/falsely convicted for their crimes...

I have tried over and over to gain the public scrutiny needed to bring the truth of my false conviction to light and have repeatedly failed due to being unable to reach enough people to cause my cause to grow exponentially - help me achieve my goal by spreading the word, all I need is one Florida attorney involved in my case to publicly admit the withheld exculpatory evidence in my case prevented me from receiving a fair and impartial trial...

I know if I reach enough people with the truth - the truth will set me free... Thank you for your support!