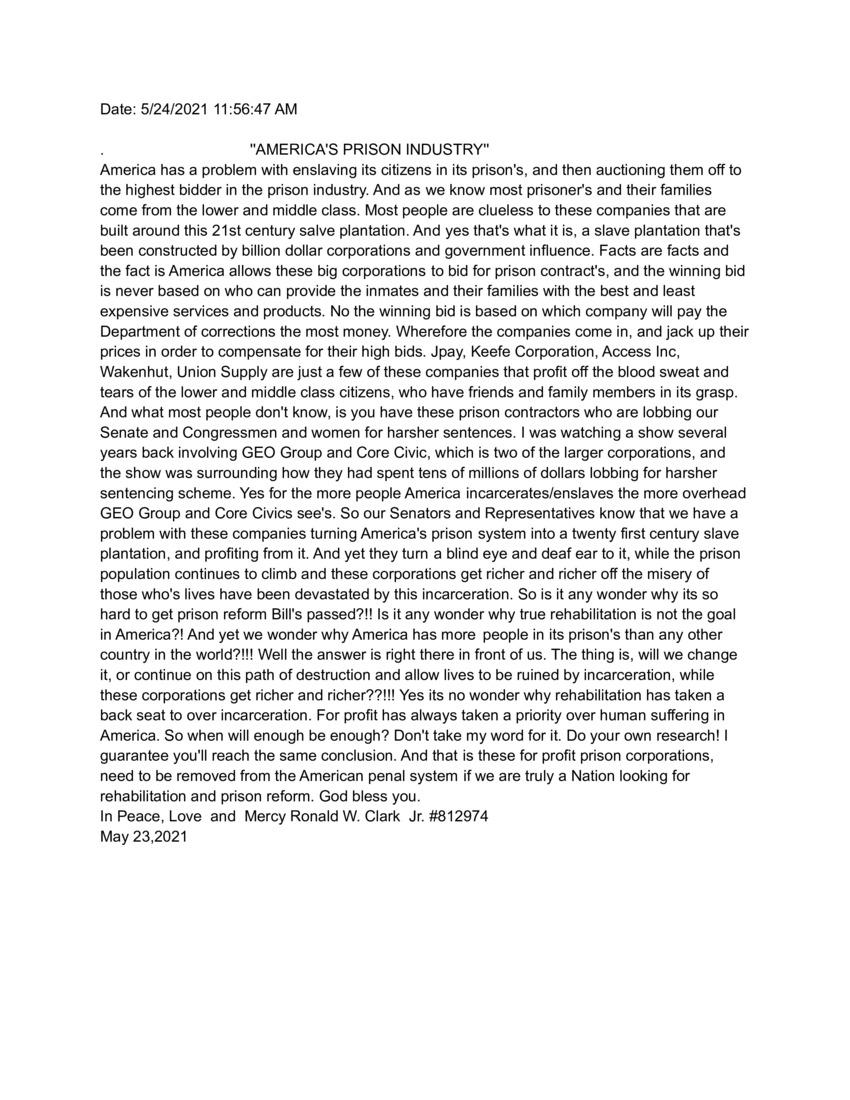 America has a problem with enslaving its citizens in its prisons, and then auctioning them off to the highest bidder in the prison industry. And as we know most prisoners and their families come from the lower and middle class. Most people are clueless to these companies that are built around this 21st century slave plantation. And yes that's what it is, a slave plantation that's been constructed by billion dollar corporations and government influence. Facts are facts and the fact is America allows these big corporations to bid for prison contracts, and the winning bid is never based on who can provide the inmates and their families with the best and lease expensive services and products. No the winning bid is based on which company will pay the Department of Corrections the most money. Wherefore the companies come in, and jack up their prices in order to compensate for their high bids. Jpay, Keefe Corporation, Access Inc, Wakenhut, Union Supply are just a few of these companies that profit off the blood, sweat and tears of the lower and middle class citizens, who have friends and family members in its grasp. And what most people don't know, is you have these prison contractors who are lobbying our Senate and Congressmen and women for harsher sentences. I was watching a show several years back involving GEO Group and Core Civic, which is two of the larger corporations, and the show was surrounding how they have spent tens of millions of dollars lobbying for harsher sentencing scheme. Yes for the more people America incarcerates/enslaves, the more overhead GEO Group and Core Civics sees. So our Senators and Representatives know that we have a plantation, and profiting from it. And yet they turn a blind eye and deaf ear to it, while the prison population continues to climb and these corporations get richer and richer off the misery of those who's lives have been devastated by this incarceration. So is it any wonder why it's so hard to get prison reform bills passed?!! Is it any wonder why true rehabilitation is not the goal in America?! And yet we wonder why America has more people in its prisons than any other country in the world?!!! Well the answer is right there in front of us. The thing is, will we change it, or continue on this path of destruction and allow lives to be ruined by incarceration, while these corporations get richer and richer??!!! Yes it's no wonder why rehabilitation has taken a back seat to over incarceration. For profit has aways taken a priority over human suffering in America. So when will enough be enough? Don't take my word for it. Do your own research! I guarantee you'll reach the same conclusion. And that is these for profit prison corporations, need to be removed from the American penal system if we are truly a Nation looking for rehabilitation and prison reform. God bless you.