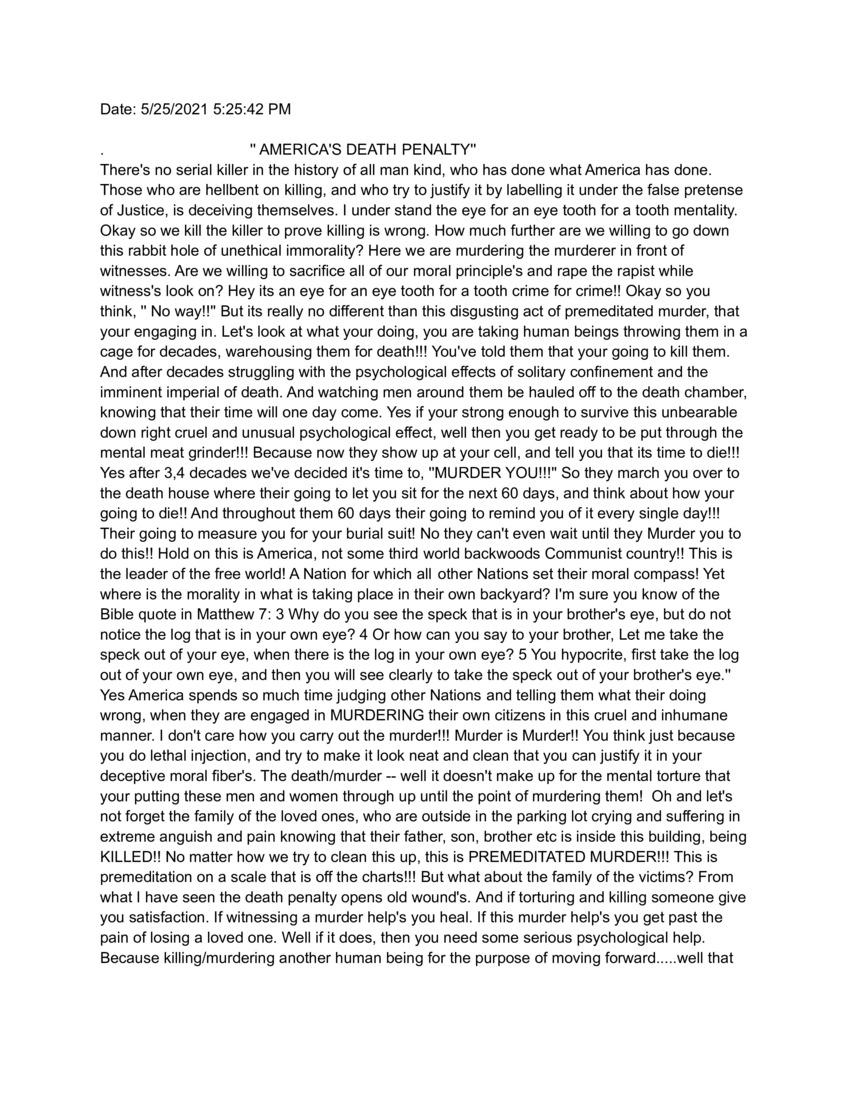 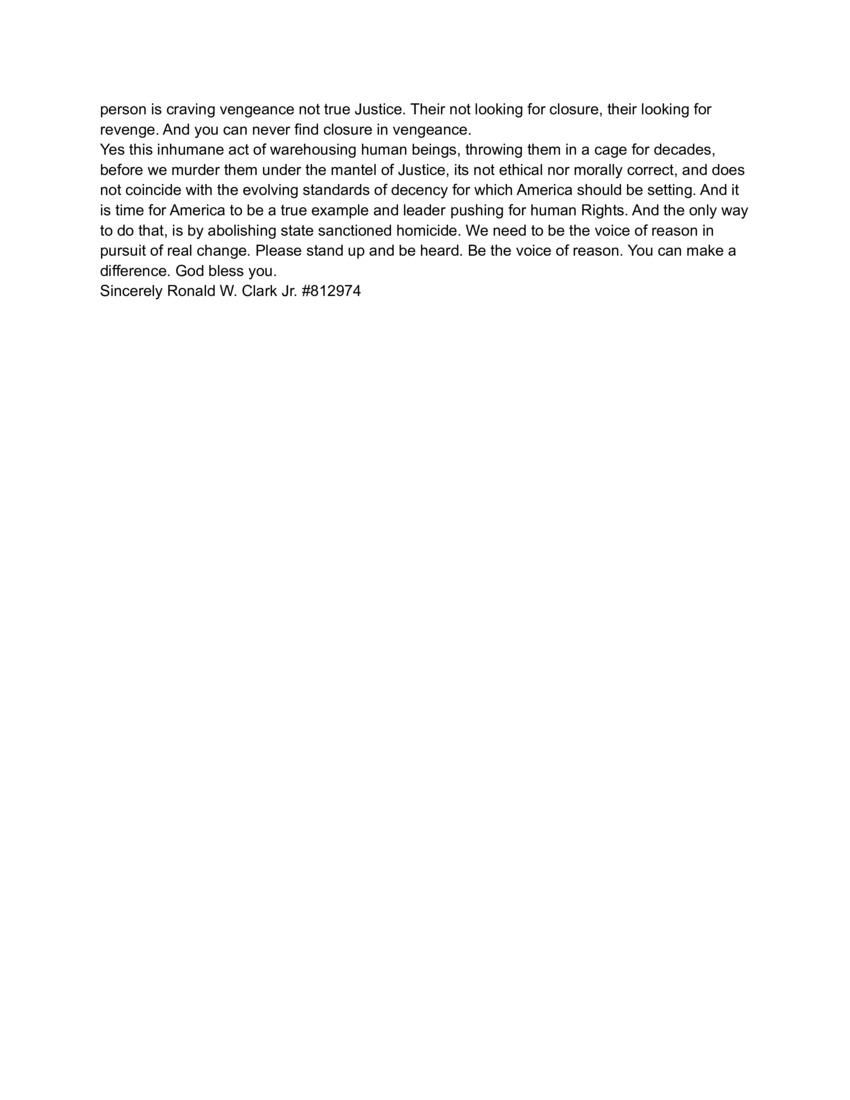 There's no serial killer in the history of all man kind, who has done what America has done. Those who are hellbent on killing, and who try to justify it by labelling it under the false pretence of Justice, is deceiving themselves. I understand the eye for an eye, tooth for a tooth mentality. Okay, so we kill the killer to prove killing is wrong. How much further are we willing to go down the rabbit hole of unethical immorality? Here we are murdering the murderer in front of witnesses. Are we willing to sacrifice all of our moral principles and rape the rapist while witnesses look on? Hey, it's an eye for an eye, tooth for a tooth, crime for crime!! Okay, so you think, "no way!!" But it's really no different than this disgusting act of premeditated murder, that you're engaging in. Let's look at what you're doing, you are taking human beings throwing them in a cage for decades, warehousing them for death!!! You've told them that you're going to kill them. And after decades struggling with the psychological effects of solitary confinement and the imminent imperial of death. And watching men around them be hauled off to the death chamber, knowing that their time will one day come. Yes, if you're strong enough to survive this unbearable, downright cruel and unusual psychological effect, well then you get ready to be put through the mental meat grinder!!! Because now they show up at your cell, and tell you that it's time to die!!! Yes, after 3, 4 decades we've decided it's time to, "MURDER YOU!!!" So they march you over to the death house where they're going to let you sit for the next 60 days, and think about how you're going to die!! And throughout them 60 days they're going to remind you of it every single day!!! They're going to measure you for your burial suit! No, they can't even wait until they murder you to do this!! Hold on, this is America, not some third world backwoods Communist country!! This is the leader of the free world! A Nation for which all other Nations set their moral compass! Yet where is the morality in what is taking place in their own backyard? I'm sure you know of the Bible quote in Matthew 7:3 "Why do you see the speck that is in your brother's eye, but do not notice the log that is in your own eye? 4 Or how an you say to your brother, Let me take the speck out of your eye, when there is the log in your own eye? 5 You hypocrite, first take the log out of your own eye, and then you will see clearly to take the speck out of your brother's eye." Yes, America spends so much time judging other Nations and telling them what they're doing wrong, when they are engaged in MURDERING their own citizens in this cruel and inhuman manner. I don't care how you carry out the murder!!! Murder is Murder!! You think just because you do lethal injection, and try to make it look neat and clean that you can justify it in your deceptive moral fibers. The death/murder -- well it doesn't make up for the mental torture that you're putting these men and women through up until the point of murdering them! Oh, and let's not forget the family of the loved ones, who are outside in the parking lot crying and suffering in extreme anguish and pain knowing that their father, son, brother, etc. is inside this building, being KILLED!! No matter how we try to clean this up, this is PREMEDITATED MURDER!!! This is premeditation on a scale that is off the charts!!! But what about the family of the victims? From what I have seen, the death penalty opens old wounds. And if torturing and killing someone gives you satisfaction. If witnessing a murder helps you heal. If this murder helps you get past the pain of losing a loved one. Well if it does, then you need some serious psychological help. Because killing/murdering another human being for the purpose of moving forward.....well that person is craving vengeance, not true Justice. They're looking for closure, they're looking for revenge. And you can never find closure in vengeance.

Yes, this inhumane act of warehousing human beings, throwing them in a cage for decades, before we murder them under the mantel of Justice, it's not ethical nor morally correct, and does not coincide with the evolving standards of decency for which America should be setting. And it is time for America to be a true example and leader pushing for human Rights. And the only way to do that, is by abolishing state sanctioned homicide. We need to be the voice of reason in pursuit of real change. Please stand up and be heard. Be the voice of reason. You can make a difference. God bless you.