FDOC and The High Vacancy Rate 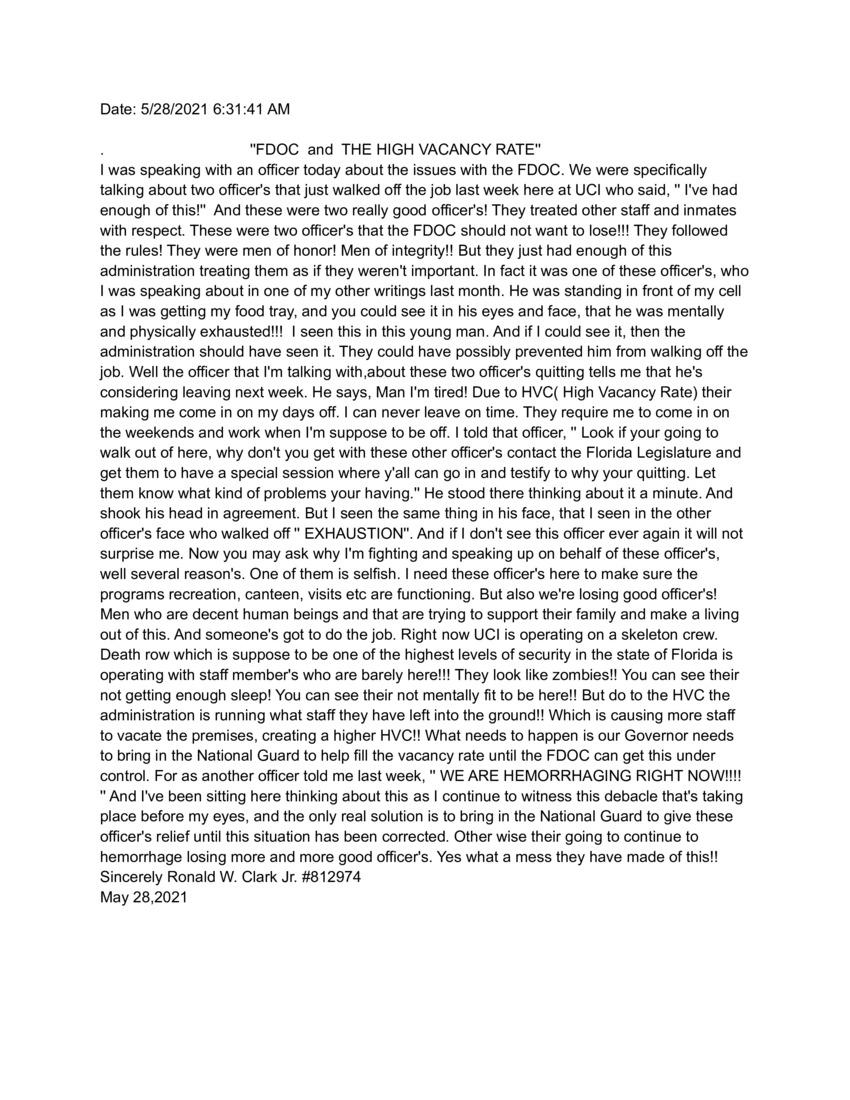 "FDOC and THE HIGH VACANCY RATE"

I was speaking with an officer today about the issues with the FDOC. We were specifically talking about two officers that just walked off the job last week here at UCI who said, "I've had enough of this!" And these were two really good officers! They treated other staff and inmates with respect. These were two officers that the FDOC should not want to lose!!! They followed the rules! They were men of honor! Men of integrity!! But they just had enough of this administration treating them as if they weren't important. In fact, it was on of these officers, who I was speaking about in one of my other writings last month. He was standing in front of my cell as I was getting my food tray, and you could see it in his eyes and face, that he was mentally and physically exhausted!!!I seen this in this young man. And if I could see it, then the administration should have seen it. They could have possibly prevented him from walking off the job. Well, the officer that I'm talking with about these two officers quitting tells me that he's considering leaving next week. He says, man I'm tired! Due to HVC (High Vacancy Rate) they're making me come in on my days off. I can never leave on time. They require me to come in on the weekends and work when I'm suppose to be off. I told the officer, "Look, if you're going to walk out of here, why don't you get with these other officers, contact the Florida Legislature and get them to have a special session where y'all can go in and testify to why you're quitting. Let them know what kind of problems you're having." He stood there thinking about it for a minute. And shook his head in agreement. But I seen the same thing in his face, that I seen in the other officer's face who walked off "EXHAUSTION". And if I don't see this officer ever again it will not surprise me. Now, you may ask why I'm fighting and speaking up on behalf of these officers, well several reasons. One of them is selfish. I need these officers here to make sure the programs recreation, canteen, visits, etc. are functioning. But also we're losing good officers! Men who are decent human beings and that are trying to support their family and make a living out of this. And someone's got to do the job. Right now, UCI is operating on a skeleton crew. Death row which is suppose to be one of the highest levels of security in the state of Florida is operating with staff members who are barely here!!! They look like zombies!! You can see they're not getting enough sleep! You can see they're not mentally fit to be here!! But due to the HVC, the administration is running what staff they have left into the ground!! Which is causing more staff to vacate the premises, creating a higher HVC!! What needs to happen is our Governor needs to bring in the National Guard to help fill the vacancy rate until the FDOC can get this under control. For as another officer told me, "WE ARE HAEMORRHAGING RIGHT NOW!!!!" And I've been sitting here thinking about this as I continue to witness this debacle that's taking place before my eyes, and the only real solution is to bring the National Guard to give these officers relief until this situation has been corrected. Otherwise they're going to continue to haemorrhage losing more and more good officers. Yes, what a mess they have made of this!!