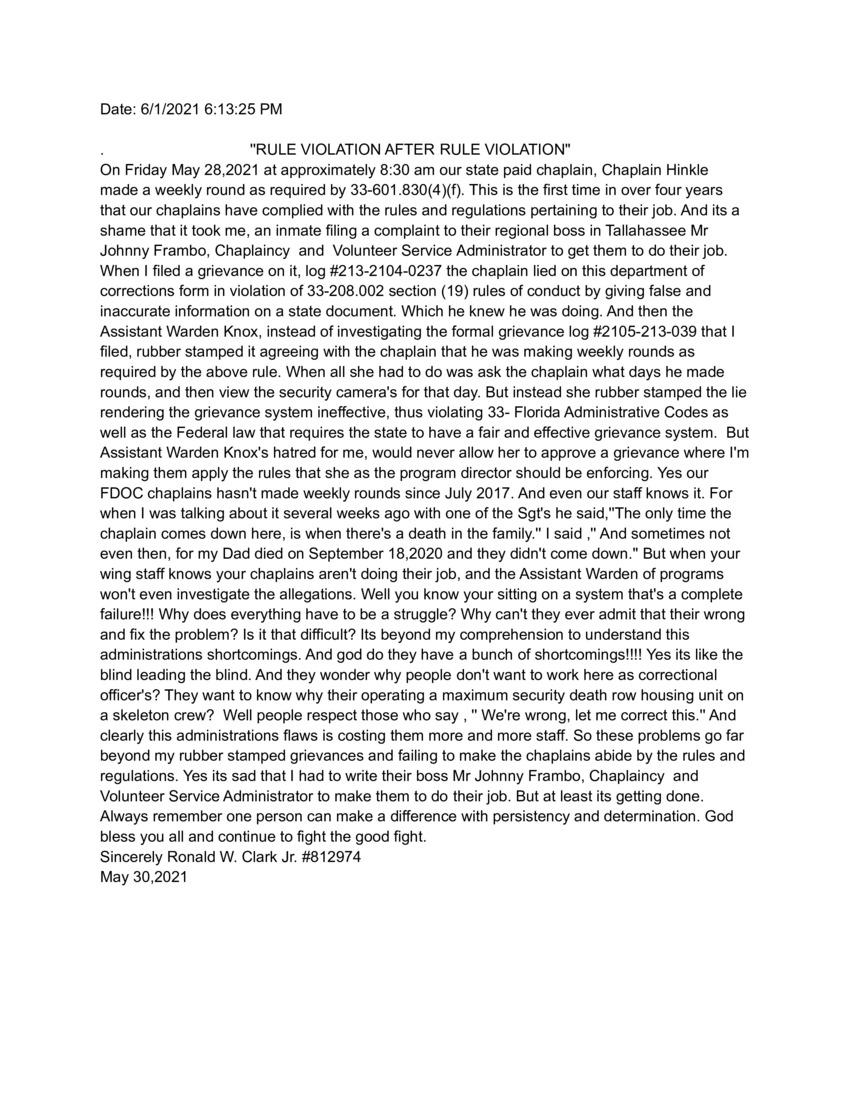 On Friday, May 28, 2021 at approximately 8:30 am our state paid chaplain, Chaplain Hinkle made a weekly round as required by 33-601.830(4)(f). This is the first time in over four years that our chaplains have complied with the rules and regulations pertaining to their job. And it's a shame that it took me, an inmate, filing a complaint to their regional boss in Tallahassee Mr Johnny Frambo, Chaplaincy and Volunteer Service Administrator to get them to do their job. When I filed a grievance on it, log #213-2104-0237 the chaplain lied on this department of inaccurate information on a state document. Which he knew he was doing. And then the Assistant Warden Knox, instead of investigating the formal grievance log #2105-213-039 that I filed, rubber stamped it agreeing with the chaplain that he was making weekly rounds as required by the above rule. When all she had to do was ask the chaplain what days he made rounds, and then view the security cameras for that day. But instead, she rubber stamped the lie rendering the grievance system ineffective, thus violating 33-Florida Administrative Codes as well as the Federal law that requires the state to have a fair and effective grievance system. But Assistant Warden Knox's hatred for me, would never allow her to approve a grievance where I'm making them apply the rules that she as the program director should be enforcing. Yes, our FDOC chaplains haven't made weekly rounds since July 2017. And even our staff knows it. For when I was talking about it several weeks ago with one of the Sgt's he said, "the only time the chaplain comes down here, is when there's a death in the family." I said, "and sometimes not even then, for my Dad died on September 18, 2020 and they didn't come down." But when your wing staff knows your chaplains aren't doing their job, and the Assistant Warden of programs won't even investigate the allegations. Well, you know you're sitting on a system that's a complete failure!!! Why does everything have to be a struggle? Why can't they ever admit that they're wrong and fix the problem? Is it that difficult? It's beyond my comprehension to understand this administration's shortcomings. And God, do they have a bunch of shortcomings!!!! Yes, it's like the blind leading the blind. And they wonder why people don't want to work here as correctional officers? They want to know why they're operating a maximum security death row housing unit on a skeleton crew? Well, people respect those who say, "we're wrong, let me correct this." And clearly this administration's flaws are costing them more and more staff. So these problems go far beyond my rubber stamped grievances and failing to make the chaplains abide by the rules and regulations. Yes, it's sad that I had to write their boss, Mr Johnny Frambo, Chaplaincy and Volunteer Service Administrator to make them to do their job. But at least it's getting done. Always remember one person can make a difference with persistency and determination. God bless you all and continue to fight the good fight.