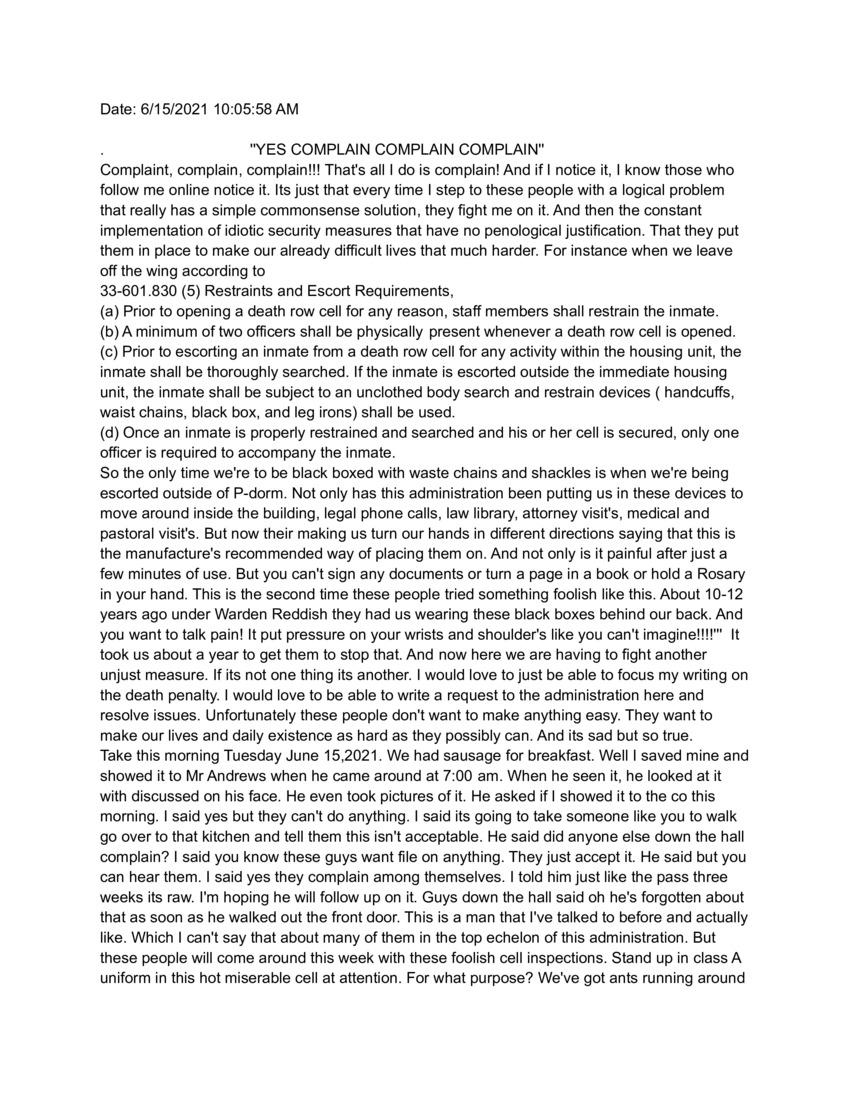 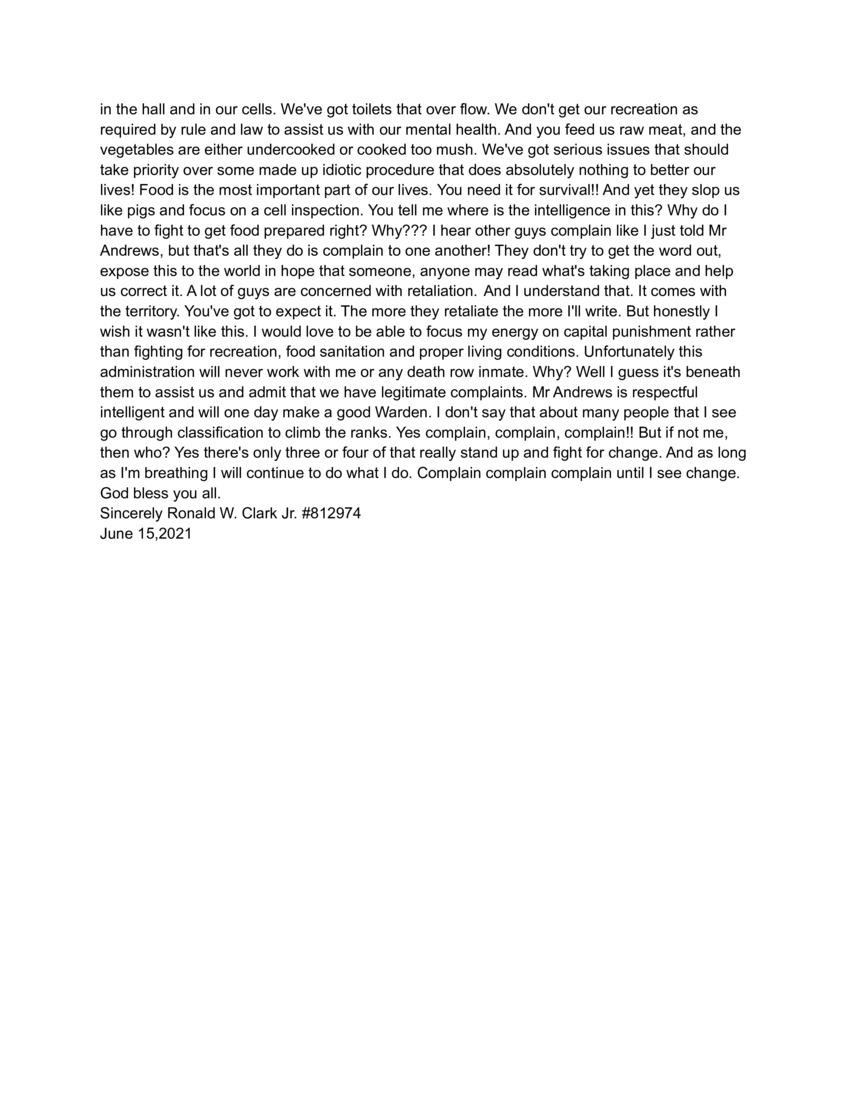 Complaint, complain, complain!!! That's all I do is complain! And if I notice it, I know those who follow me online notice it. Its just that every time I step to these people with a logical problem that really has a simple commonsense solution, they fight me on it. And then the constant implementation of idiotic security measures that have no penological justification. That they put them in place to make our already difficult lives that much harder. For instance when we leave off the wing according to

(a) Prior to opening a death row cell for any reason, staff members shall restrain the inmate.
(b) A minimum of two officers shall be physically present whenever a death row cell is opened.
(c) Prior to escorting an inmate from a death row cell for any activity within the housing unit, the inmate shall be thoroughly searched. If the inmate is escorted outside the immediate housing unit, the inmate shall be subject to an unclothed body search and restrain devices ( handcuffs, waist chains, black box, and leg irons) shall be used.
(d) Once an inmate is properly restrained and searched and his or her cell is secured, only one officer is required to accompany the inmate.

So the only time we're to be black boxed with waste chains and shackles is when we're being escorted outside of P-dorm. Not only has this administration been putting us in these devices to move around inside the building, legal phone calls, law library, attorney visit's, medical and pastoral visits. But now their making us turn our hands in different directions saying that this is the manufacture's recommended way of placing them on. And not only is it painful after just a few minutes of use. But you can't sign any documents or turn a page in a book or hold a Rosary in your hand. This is the second time these people tried something foolish like this. About 10-12
years ago under Warden Reddish they had us wearing these black boxes behind our back. And you want to talk pain! It put pressure on your wrists and shoulder's like you can't imagine!!!!" It took us about a year to get them to stop that. And now here we are having to fight another unjust measure. If its not one thing its another. I would love to just be able to focus my writing on the death penalty. I would love to be able to write a request to the administration here and resolve issues. Unfortunately these people don't want to make anything easy. They want to make our lives and daily existence as hard as they possibly can. And its sad but so true.

Take this morning Tuesday June 15,2021. We had sausage for breakfast. Well I saved mine and showed it to Mr Andrews when he came around at 7:00 am. When he seen it, he looked at it with discussed on his face. He even took pictures of it. He asked if I showed it to the co this, morning. I said yes but they can't do anything. I said its going to take someone like you to walk go over to that kitchen and tell them this isn't acceptable. He said did anyone else down the hall complain? I said you know these guys want file on anything. They just accept it. He said but you can hear them. I said yes they complain among themselves. I told him just like the pass three weeks its raw. I'm hoping he will follow up on it. Guys down the hall said oh he's forgotten about that as soon as he walked out the front door. This is a man that I've talked to before and actually like. Which I can't say that about many of them in the top echelon of this administration. But these people will come around this week with these foolish cell inspections. Stand up in class A uniform in this hot miserable cell at attention. For what purpose? We've got ants running around in the hall and in our cells. We've got toilets that over flow. We don't get our recreation as required by rule and law to assist us with our mental health. And you feed us raw meat, and the vegetables are either undercooked or cooked too mush. We've got serious issues that should take priority over some made up idiotic procedure that does absolutely nothing to better our lives! Food is the most important part of our lives. You need it for survival! And yet they slop us like pigs and focus on a cell inspection. You tell me where is the intelligence in this? Why do I have to fight to get food prepared right? Why??? I hear other guys complain like I just told Mr Andrews, but that's all they do is complain to one another! They don't try to get the word out, expose this to the world in hope that someone, anyone may read what's taking place and help
us correct it. A lot of guys are concerned with retaliation. And I understand that. It comes with the territory. You've got to expect it. The more they retaliate the more I'l write. But honestly I wish it wasn't like this, I would love to be able to focus my energy on capital punishment rather than fighting for recreation, food sanitation and proper living conditions. Unfortunately this, administration will never work with me or any death row inmate. Why? Well I guess it's beneath them to assist us and admit that we have legitimate complaints. Mr Andrews is respectful intelligent and will one day make a good Warden. I don't say that about many people that I see go through classification to climb the ranks. Yes complain, complain, complain! But if not me, then who? Yes there's only three or four of that really stand up and fight for change. And as long as I'm breathing I will continue to do what I do. Complain complain complain until I see change.

God bless you all.