What a Disgrace to Chaplains Everywhere 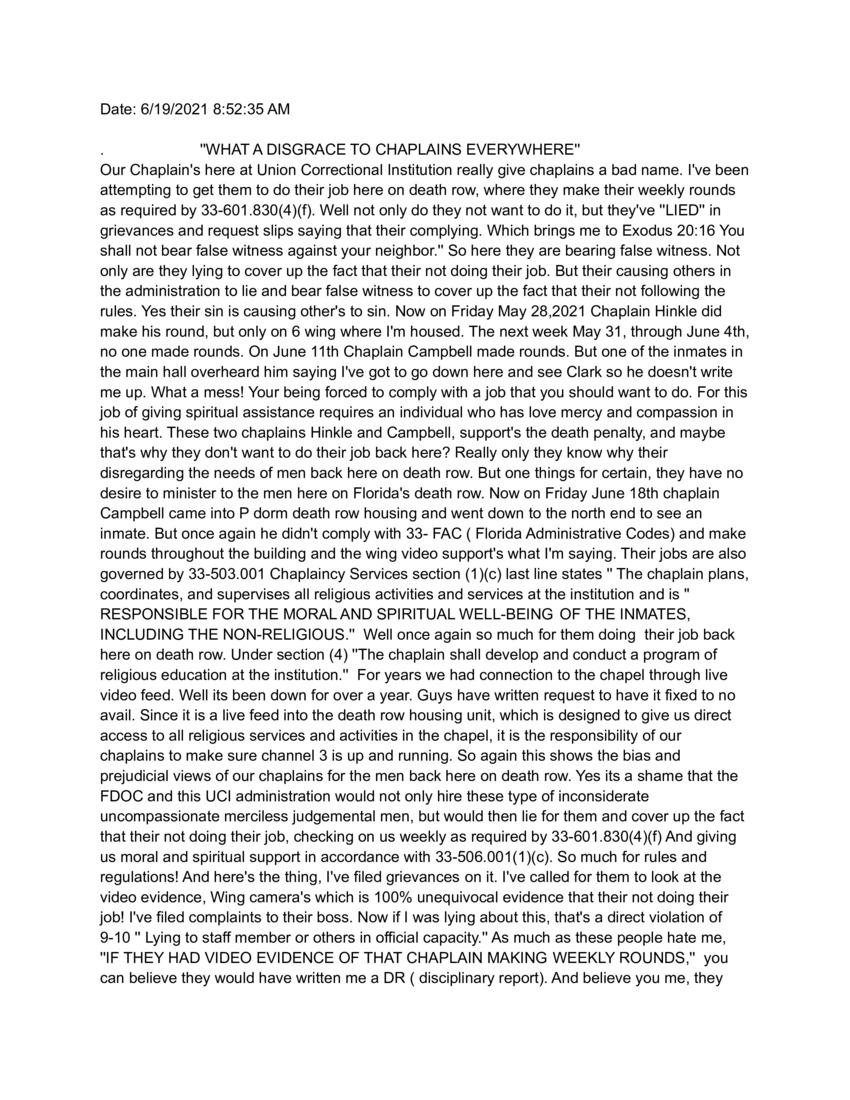 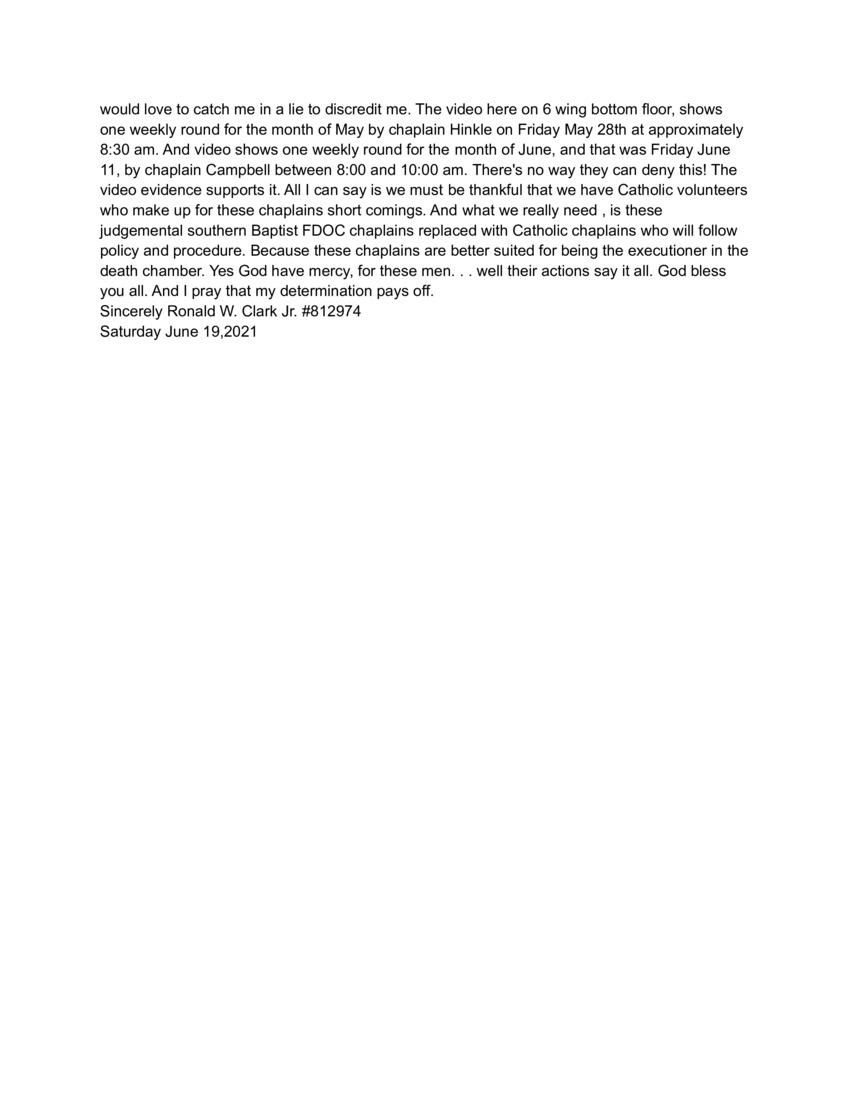 "WHAT A DISGRACE TO CHAPLIANS EVERYWHERE"
Our Chaplain's here at Union Correctional Institution really give chaplains a bad name. I've been attempting to get them to do their job here on death row, where they make their weekly rounds as required by 33-601.830(4)(f). Well not only do they not want to do it, but they've "LIED" in grievances and request slips saying that their complying. Which brings me to Exodus 20:16 You shall not bear false witness against your neighbor." So here they are bearing false witness. Not only are they lying to cover up the fact that their not doing their job. But their causing others in rules. Yes their sin is causing other's to sin. Now on Friday May 28, 2021 Chaplain Hinkle did make his rounds, but only on 6 wing where I'm housed. The next week May 31, through June 4th, the main hall overheard him saying I've got to go down here and see Clark so he doesn't write me up. What a mess! Your being forced to comply with a job that you should want to do. For this job of giving spiritual assistance requires and individual who has love mercy and compassion in his heart. These two chaplains Hinkle and Campbell, support's the death penalty, and maybe disregarding the needs of men back here on death row. But one things for certain, they have no desire to minister the men here on Florida's death row. Now on Friday June 18th chaplain Campbell came into P dorm death row housing and went down to the north end to see an inmate. But once again he didn't comply with 33- FAC (Florida Administrative Codes) and make rounds throughout the building and the wing video support's what I'm saying. Their jobs are also governed by 33-503.001 Chaplaincy Services section (1)(c) last line states" The chaplain plans, coordinates, and supervises all religious activities and services at the institution and is " RESPONSIBLE FOR THE MORAL AND SPIRITUAL WELL-BEING OF THE INMATES, INCLUDING THE NON-RELIGIOUS." Well once again so much for them doing their job back here on death row. Under section (4) "The chaplain shall develop and conduct a program of religious education at the institution." For years we had connection to the chapel through live video feed. Well its been down for over a year. Guys have written request to have it fixed to now access to all religious services and activities in the chapel, it is the responsibility of our chaplains to make sure channel 3 is up and running. So again this shows the bias and prejudicial views of our chaplains for the men back here on death row. Yes its a shame that the uncompassionate merciless judgemental men, but would then lie for them and cover up the fact that their not doing their job, checking on us weekly as required by 33-601.830(4)(f) And giving regulations! And here's the thing, I've filed grievances on it. I've called for them to look at the video evidence, Wing camer's which is 100% unequivocal evidence that their not doing their job! I've filed complaints to their boss. Now if I was lying about this, that's a direct violation of 9-10" Lying to staff member or others in official capacity." As much as these people hate me, "IF THEY HAD VIDEO EVIDENCE OF THAT CHAPLAIN MAKING WEEKLY ROUNDS," you can believe they would have written me a DR (disciplinary report). And believe you me, they would love to catch me in a lie to discredit me. The video here on 6 wing bottom floor, shows one weekly round for the month of May by chaplain Hinkle on Friday May 28th at approximately 8:30 am. And video shows one weekly round for the month of June, and that was Friday June 11, by chaplain Campbell between 8:00 and 10:00 am. There's no way they can deny this! The video evidence supports it. All I can say is we must be thankful that we have Catholic volunteers who make up for these chaplains short comings. And what we really need, is these policy and procedure. Because these chaplains are better suited for being the executioner in the you all. And I pray that my determination pays off.
Sincerely Ronald W. Clark Jr. #812974
Saturday June 19, 2021