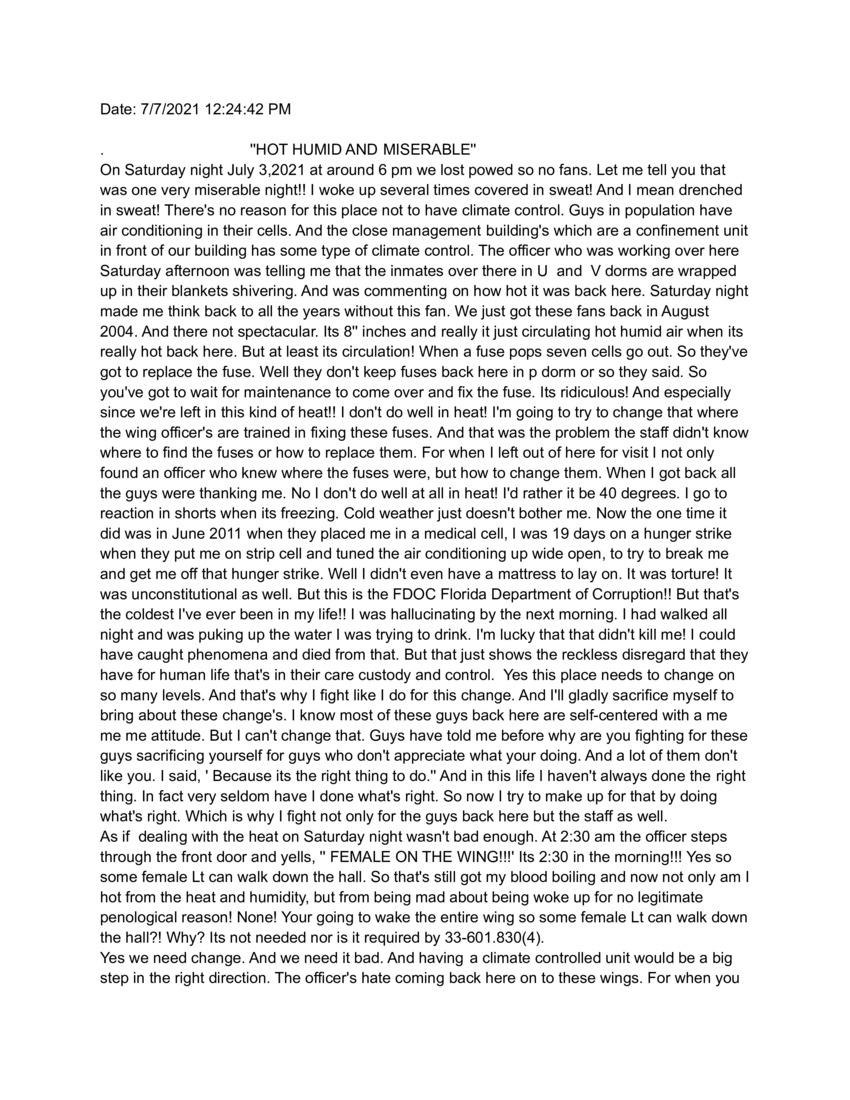 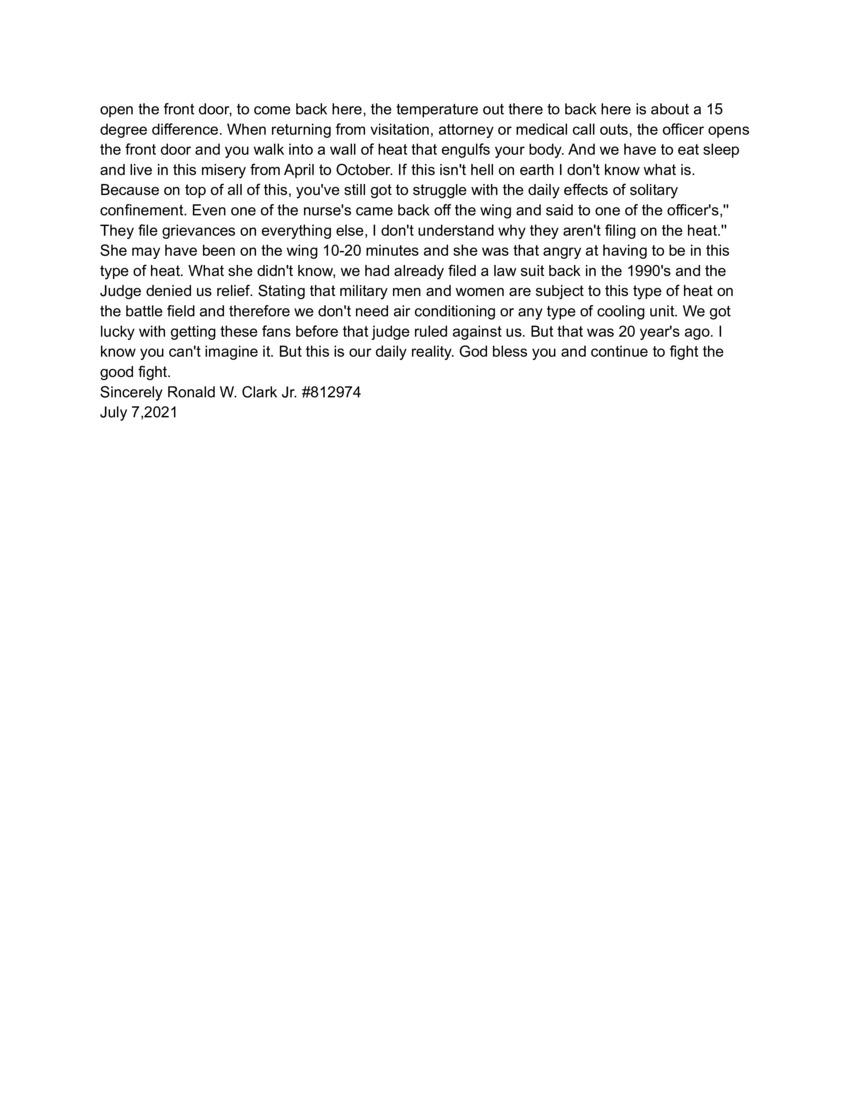 "HOT HUMID AND MISERABLE"
On Saturday night July 3,2021 at around 6 pm we lost powed so no fans. Let me tell you that
was one very miserable night!! I woke up several times covered in sweat! And I mean drenched
in sweat! There's no reason for this place not to have climate control. Guys in population have
air conditioning in their cells. And the close management building's which are a confinement unit
in front of our building has some type of climate control. The officer who was working over here
Saturday afternoon was telling me that the inmates over there in U and V dorms are wrapped
up in their blankets shivering. And was commenting on how hot it was back here. Saturday night
made me think back to all the years without this fan. We just got these fans back in August
2004. And there not spectacular. Its 8" inches and really it just circulating hot humid air when its
really hot back here. But at least its circulation! When a fuse pops seven cells go out. So they've
got to replace the fuse. Well they don't keep fuses back here in p dorm or so they said. So
you've got to wait for maintenance to come over and fix the fuse. Its ridiculous! And especially
since we're left in this kind of heat!! I don't do well in heat! I'm going to try to change that where
the wing officer's are training in fixing these fuses. And that was the problem the staff didn't know
where to find the fuses or how to replace them. For when I left out of here for visit I not only
found an officer who knew where the fuses were, but how to change them. When I got back all
the guys were thanking me. No I don't do well at all in heat! I'd rather it be 40 degrees. I go to
reaction in shorts when its freezing. Cold weather just doesn't both me. Now the one time it
did was in June 2011 when they placed me in a medical cell, I was 19 days on a hunger strike
when they put me on strip cell and turned the air conditioning up wide open, to try to break me
and get me off that hunger strike. Well I didn't even have a mattress to lay on. It was torture! It
was unconstitutional as well. But this is the FDOC Florida Department of Corruption!! But that's
the coldest I've ever been in my life!! I was hallucinating by the next morning. I had walked all
night and was puking up the water I was trying to drink. I'm lucky that that didn't kill me! I could
have caught phenomena and died from that. But that just shows the reckless disregard that they
have for human life that's in their care custody and control. Yes this place needs to change on
so many levels. And that's why I fight like I do for this change. And I'll gladly sacrifice myself to
bring about these change's. I know most of these guys back here are self0centered with a me
me me attitude. But I can't change that. Guys have told me before why are you fighting for these
guys sacrificing yourself for guys who don't appreciate what your doing. And a lot of them don't
like you. I said, ' Because its the right thing to do." And in this life I haven't always done the right
thing. In fact very seldom have I done what's right. So now I try to make up for that by doing
what's right. Which is why I fight not only for the guys back here but the staff as well.
As if dealing with the heat on Saturday night wasn't bad enough. At 2:30 am the officer steps
through the front doors and yells, "FEMALE ON THE WING!!!' Its 2:30 in the morning!!! Yes so
some female Lt can walk down the hall. So that's still got my blood boiling and now not only and I
hot from the heat and humidity, but from being mad about being woke up for no legitimate
penological reason! None! Your going to wake the entire wing so some female Lt can walk down
the hall?! Why? Its not needed nor is it required by 33-601.830(4).
Yes we need change. And we need it bad. And having a climate controlled unit would be a big
step in the right direction. The officer's hate coming back here on to these wings. For when you
open the front door, to come back here, the temperature out there to back here is about a 15
degree difference. When returning from visitation, attorney or medical call outs, the officer opens
the front door and you walk into a wall of heat that engulfs your body. And we have to eat sleep
and live in this misery from April to October. If this isn't hell on earth I don't know what is.
Because on top of all this, you've still got to struggle with the daily effects of solitary
confinement. Even one of the nurse's came back off the wing and said to one of the officer's,"
They file grievances on everything else, I don't understand why they aren't filing on the heat."
She may have been on the wing 10-20 minutes and she was that angry at having to be in this
type of heat. What she didn't know, we had already filed a law suit back in the 1990's and the
Judge denied us relief. Stating that military men and women are subject to this type of heat on
the battle field and therefore we don't need air conditioning or any type of cooling unit. We got
lucky with getting these fans before that judge ruled against us. But that was 20 year's ago. I
know you can't imagine it. But this is our daily reality. God bless you and continue to fight the
good fight.
Sincerely Ronald W. Clark r. #812974
July 7,2021