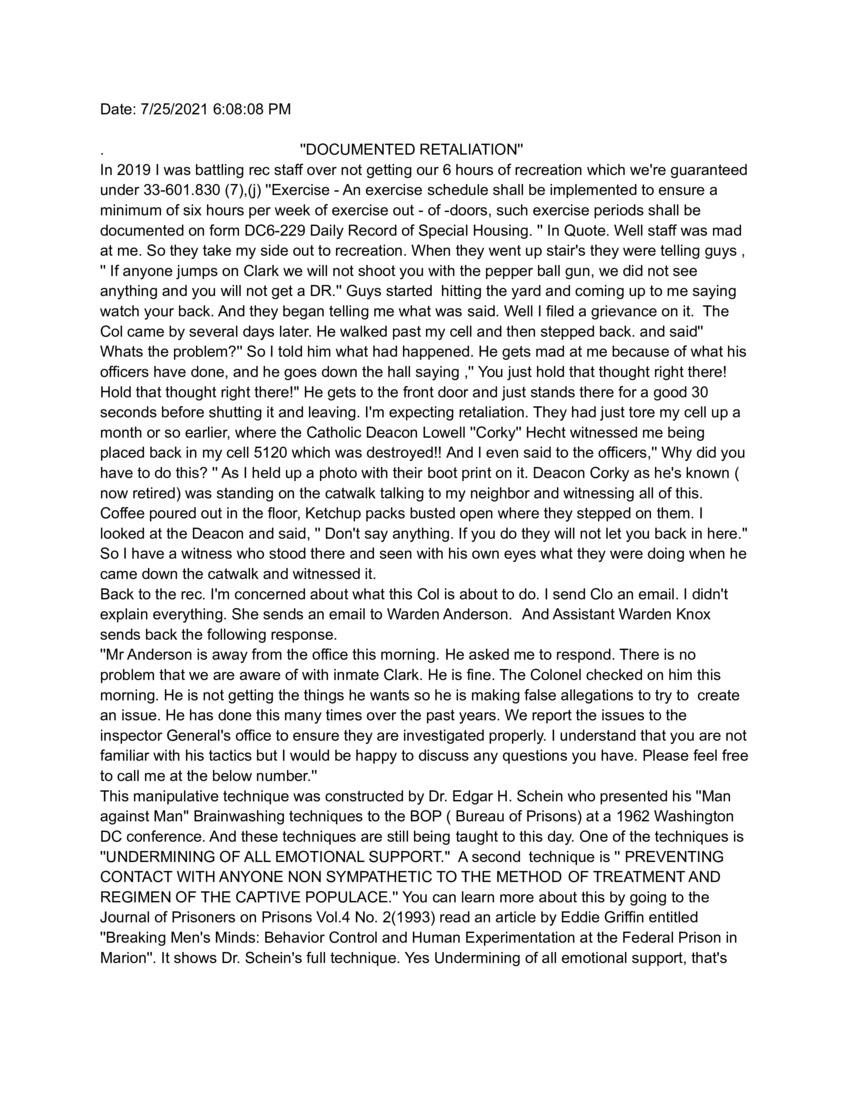 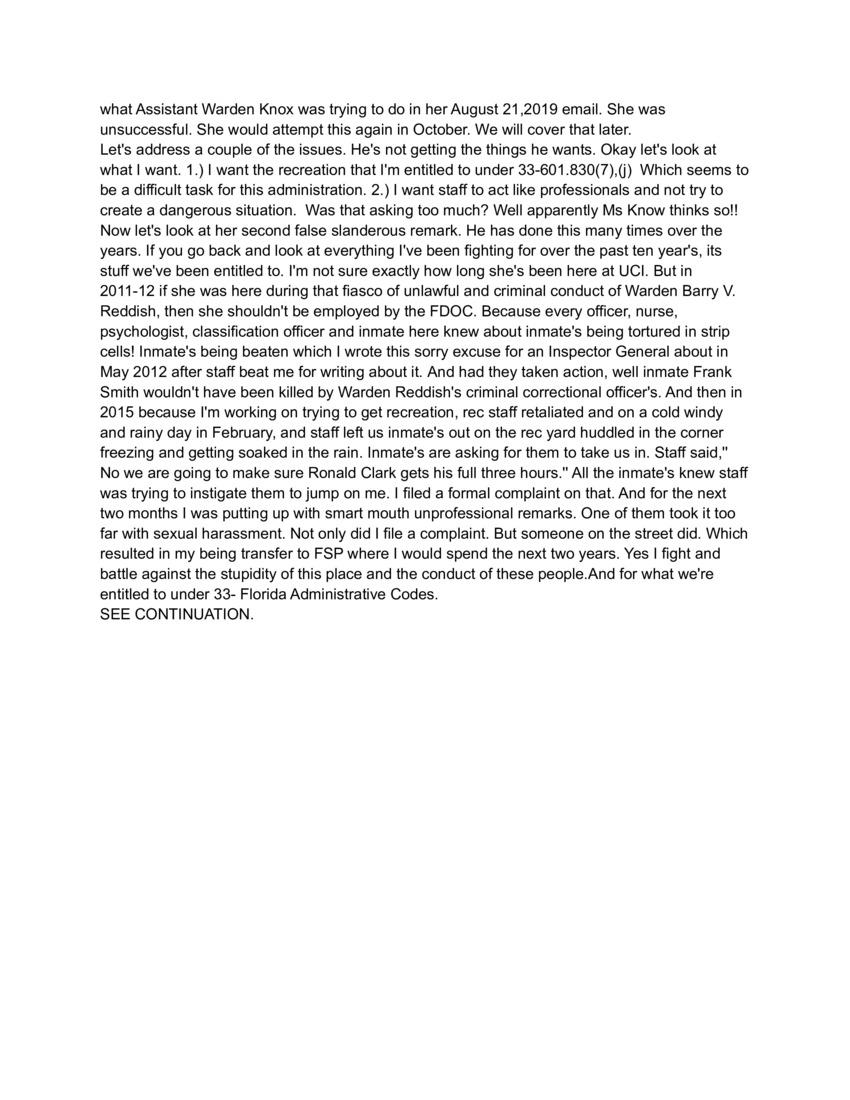 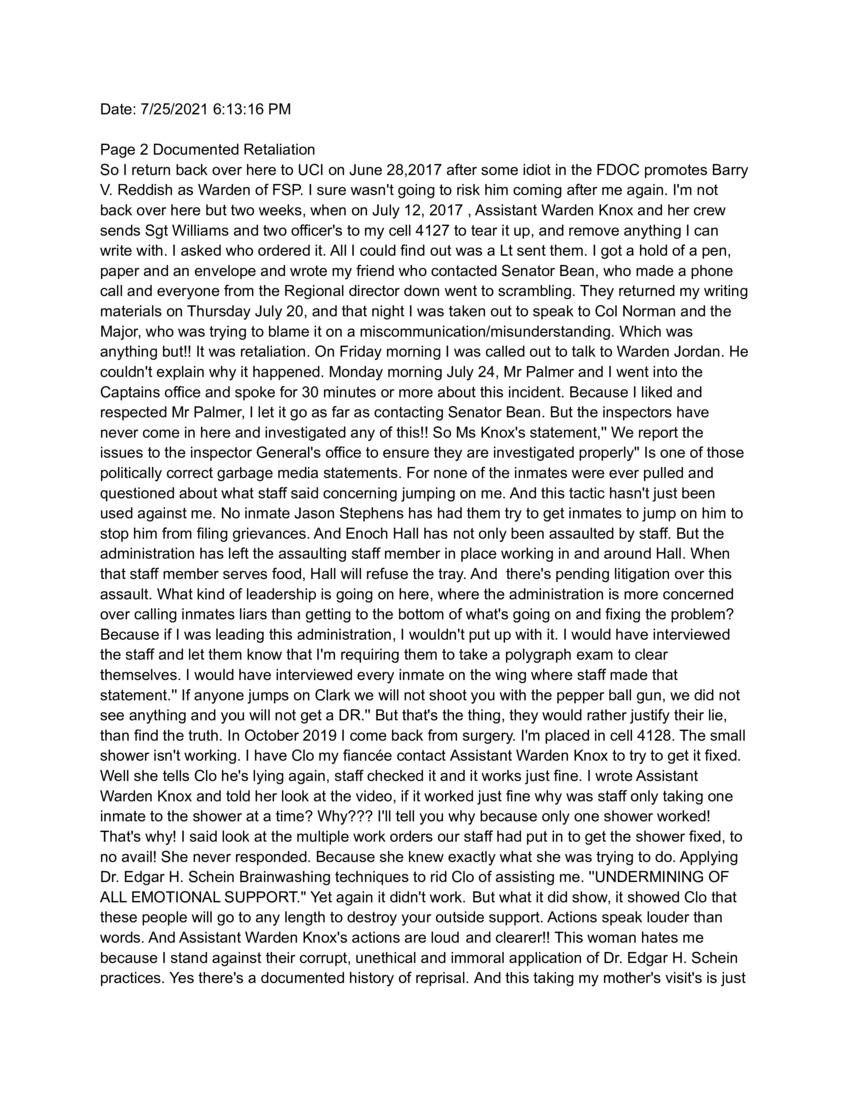 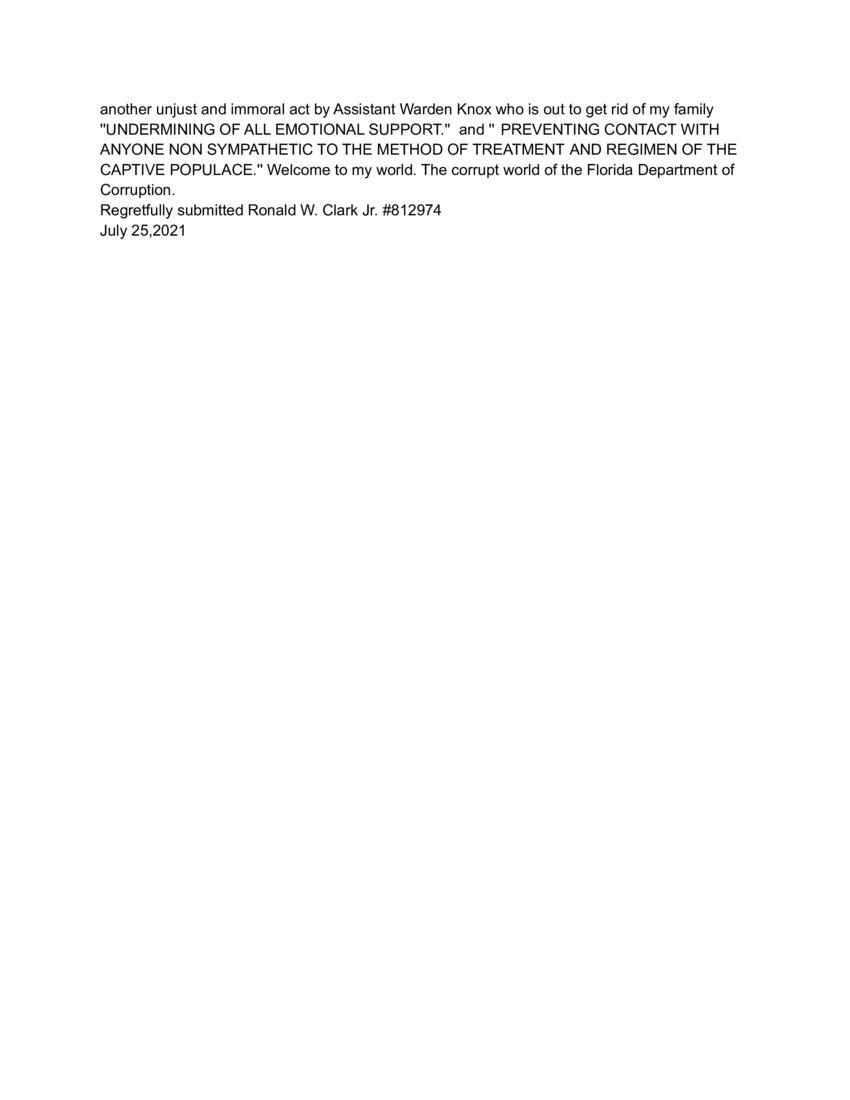 In 2019 I was battling rec staff over not getting our 6 hours of recreation which we're guaranteed under 33-601.830 (7), (j) "Exercise- An exercise schedule shall be implemented to ensure a minimum of six hours per week of exercise out - of -doors, such exercise periods shall be documented on form DC6-299 Daily Record of Special Housing. " In Quote. Well staff was mad at me. So they take my side out to recreation. When they went up stair's they were telling guys , " If anyone jumps on Clark e will not shoot you with the pepper ball gun, we did not see anything and you will not get a DR." Guys started hitting the yard and comping up to me saying watch your back. And they began telling me what was said. Well I filed a grievance on it. The Col came by several days later. He walked past my cell and then stepped back. and said" Whats the problem?" So I told him what had happened. He gets mad at me because of what his officers have done, and he goes down the hall saying, "You just hold that thought right there! Hold that thought right there!" He gets to the front door and just stand there for a good 30 seconds before shutting it and leaving. I'm expecting retaliation They had just tore my cell up a month or so earlier, where the Catholic Deacon Lowell "Corky" Hecht witnessed me being placed back in my cell 5120 which was destroyed!! And I even said to the officers," Why did you have to do this?" As I held up a photo with their boot print on it. Deacon Corky as he's known (now retired) was standing on the catwalk talking to my neighbor and witnessing all of this. Coffee pour out in the floor, Ketchup packs busted open where they stepped on them. I looked at the Deacon and said, "Don't say anything. IF you do they will not let you back in here." So I have a witness who stood there and seen with his own eyes what they were doing when he came down the catwalk and witnessed it.

Back to the rec. I'm concerned about what this Col is about to do. I send Clo an email. I didn't explain everything. She sends an email to Warden Anderson. And Assistant Warden Knox sends back the following response.

"Mr. Anderson is away from the office this morning. He asked me to respond. There is no problem that we are aware of with inmate Clark. He is fine. The Colonel checked on him this morning. He is not getting the things he wants so he is making false allegations to try to create an issue. He has done this many times over the past years. We report the issue to the inspector General's office to ensure they are investigate properly. I understand that you are not familiar with his tactics but I would be happy to discuss any questions you have. Please feel free to call me at the below number."

This manipulative technique was constructed by Dr. Edgar H. Schein who presented his "Man against Man" Brainwashing techniques to the BOP (Bureau of Prisons) at a 1962 Washington DC conference. And these techniques are still being taught to this day. One of the techniques is "UNDERMINING OF ALL EMOTIONAL SUPPORT." A second technique is "PREVENTING CONTACT WITH ANYONE NON SYMPATHETIC TO THE METHOD OF TREATMENT AND REGIMEN OF THE CAPTIVE POPULACE." You can learn more about this by going to the Journal of Prisoners on Prisons Vol.4 No. 2 (1993) read an article by Eddie Griffin entitled "Breaking Men's Minds: Behavior Control and Human Experimentation at the Federal Prison in Marion". It shows Dr. Schein's full technique. Yes Undermining of all emotional support, that's what Assistant Warden Knox was trying to do in her August 21,2019 email. She was unsuccessful. She would attempt this again in October. We will cover that later. Let's address a couple of the issues. He's not getting the things he wants. Okay let's look at what I want. 1.) I want the recreation that I'm entitled to under 33-601.830(7),(j) Which seems to be a difficult task for this administration. 2.) I want staff to act like professionals and not try to create a dangerous situation. Was that asking too much? Well apparently Ms Know thinks so!! Now let's look at her second false slanderous remark. He has done this many times over the years. If you go back and look at everything I've been fighting for over the past ten year's, its stuff we've been entitled to. I'm not sure exactly how long she's been here at UCI. But in 2011-12 if she was here during that fiasco of unlawful and criminal conduct of Warden Barry V. Reddish, then she shouldn't be employed by the FDOC. Because every officer, nurse, psychologist, classification officer and inmate here knew about inmate's being tortured in strip
cells! Inmate's being beaten which I wrote this sorry excuse for an Inspector General about in May 2021 after staff beat me for writing about it. And had they taken action, well inmate Frank Smith wouldn't have been killed by Warden Reddish's criminal correctional officer's. And then in 2015 because I'm working on trying to get recreation, rec staff retaliated and on a cold windy and rainy day in February, and staff left us inmate's out on the rec yard huddled in the corner freezing and getting soaking in the rain. Inmate's are asking for them to take us in. Staff said, " No we are going to make sure Ronald Clark gets his full three hours." All the inmate's knew staff was trying to instigate them to jump on me. I filed a formal complaint on that. And for the next two months I was putting up with smart mouth unprofessional remarks. One of them took it too far with sexual harassment. Not only did I file a complaint. But someone on the street did. Which resulted in my being transfer to FSP where I would spend the next two years. Yes I fight and battle against the stupidity of this place and the conduct of these people.And for what we're entitled to under 33- Florida Administrative Codes.
SEE CONTINUATION

Page 2 Documented Retaliation
So I return back over here to UCI on June 28,2017 after some idiot in the FDOC promotes Barry V. Reddish as Warden of FSP. I sure wasn't going to risk him coming after me again. I'm not back over here but two weeks, when on July 12, 2017 ,Assistant Warden Knox and her crew sends Sgt Williams and two officer's to my cell 4127 to tear it up, and remove anything I can write with. I asked who ordered it. All I could find out was a Lt sent them. I got a hold of a pen, paper and an envelope and wrote my friend who contacted Senator Bean, who made a phone call and everyone from the Regional direction down went to scrambling. They returned my writing materials on Thursday July 20, and that night I was taken out to speak to Col Norman and the Major, who was trying to blame it on a miscommunication/misunderstanding. Which was anything but!! It was retaliation. On Friday morning I was called out to talk to Warden Jordan. He couldn't explain why it happened. Monday morning July 24, Mr Palmer and I went into the Captains office and spoke for 30 minutes or more about this incident. Because I liked and respected Mr Palmer, I let it go as far as contacting Senator Bean. But the inspectors have never come in here and investigated any of this! So Ms Knox's statement, "We report the issues to the inspector General's office to ensure they are investigated properly" Is one of those politically correct garbage media statement. For none of the inmates were ever pulled and questioned about what staff said concerning jumping on me. And this tactic hasn't been just been used against me. No inmate Jason Stephens has had them try to get inmates to jump on him to stop him from filing grievances. And Enoch Hall has not only been assaulted by staff. But the administration has left the assaulting staff member in place working in and around Hall. When that staff member serves food, Hall will refuse the tray. And there's pending litigation over this assault. What kind of leadership is going on here, where the administration is more concerned over calling inmates lairs than getting to the bottom of what's going on and fixing the problem? Because if I was leading this administration, I wouldn't put up with it. I would have interviewed the staff and let them know that I'm requiring them to take a polygraph exam to clear themselves. I would have interviewed every inmate on the wing where staff made that statement. "If anyone jumps on Clark we will not shoot you with the pepper ball gun, we did not see anything and you will not get a DR." But that's the thing, thy would rather justify their lie, than find the truth. In October 2019 I come back from surgery. I'm placed in cell 4128. The small shower isn't working. I have Clo my fiancée contact Assistant Warden Knox to try to get it fixed. Well she tells Clo he's lying again, staff checked it and it works just fine. I wrote Assistant Warden Knox and told her look at the video, if it worked just find why was staff only taking one inmate to the shower at a time? Why??? I'll tell you why because only one shower worked! That's why! I said look at the multiple work orders our staff had put in to get the shower fixed, to no avail! She never responded. Because she knew exactly what she was trying to do. Applying Dr. Edgar H. Schein Brainwashing techniques to rid Clo of assisting me. "UNDERMINING OF ALL EMOTIONAL SUPPORT." Yet again it didn't work. But what it did show, it showed Clo that these people will go to any length to destroy your outside support. Actions speak louder than words. And Assistant Warden Knox's actions are loud and clearer!! This woman hates me because I stand against their corrupt, unethical and immoral application of Dr. Edgar H. Schein practices. Yes there's a documented history of reprisal. And this taking my mother's visit's is just another unjust and immoral act by Assistant Warden Knox who is out to get rid of my family "UNDERMINING OF ALL EMOTIONAL SUPPORT." and " PREVENTING CONTACT WITH CAPTIVE POPULACE." Welcome to my world. The corrupt world of the Florida Department of Corruption.
Regretfully submitted Ronald W. Clark Kr. #812947
July 25,2021