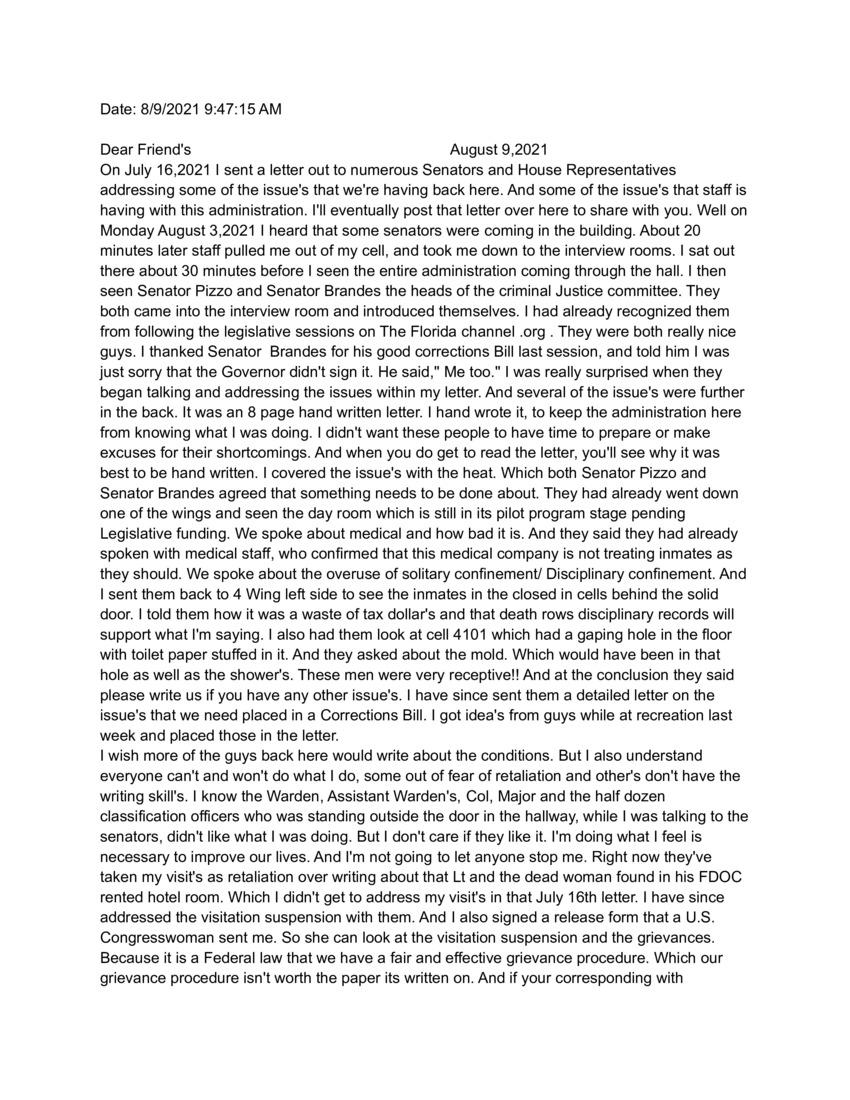 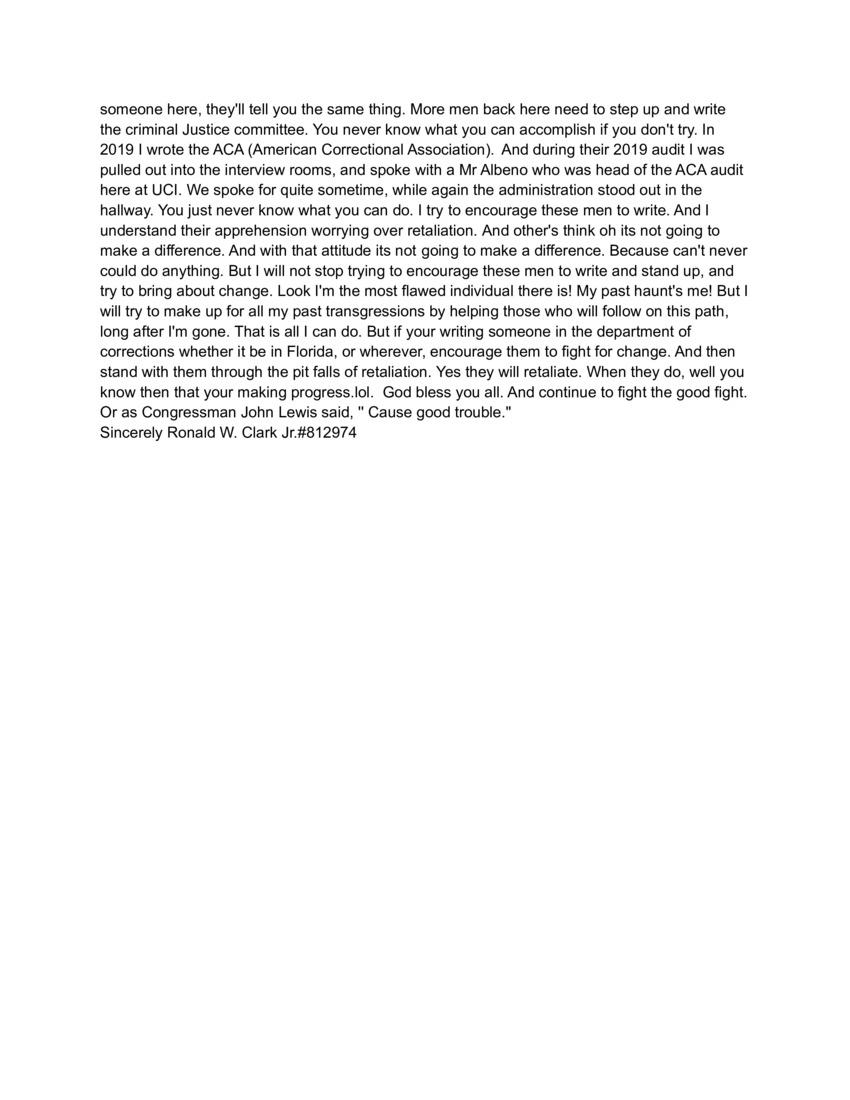 Dear Friend's August 9,2021
On July 16,2021 I sent a letter out to numerous Senators and House Representatives
addressing some of the issue's that we're having back here. And some of the issue's that staff is
having wit this administration. I'll eventually post that letter over here to share with you. Well on
Monday August 3,2021 I heard that some senators were coming in the building. About 20
minutes later staff pulled out of my cell, and took me down to the interview rooms. I sat out
there about 30 minutes before I seen the entire administration coming through the hall. They
both came into the interview room and introduced themselves. I had already recognized them
from following the legislative sessions on The Florida channel .org . They were both really nice
guys. I thanked Senator Brandes for his good corrections Bill last session, and told him I was
just sorry that the Governor didn't sign it. He said," Me too." I was really surprised when they
began talking and addressing the issues within my letter. And several of the issue's were further
in the back. It was an 8 page hand written letter. I hand wrote it, to keep the administration here
from knowing what I was doing. I didn't want these people to have time to prepare or make
excuses for their shortcomings. And when you do get to read the letter, you'll see why it was
best to be hand written. I covered the issue's with the heat. Which both Senator Pizzo and
Senator Brandes agreed that something needs to be done about. They had already went down
one of the wings and seen the day room which is still in its pilot program stage pending
Legislative funding. We spoke about medical and how bad it is. And they said they had already
spoken with medical staff, who confirmed that this medical company is not treating inmates as
they should. We spoke about the overuse of solitary confinement/ Disciplinary confinement. And
I sent them back to 4Wing left side to se the inmates in the closed in cells behind the solid
door. I told them how it was a waste of tax dollar's and that death rows disciplinary records will
support what I'm saying. I also had them look at cell 4101 which had a gaping hole in the floor
with toilet paper stuffed in it. And they asked about the mold. Which would have been in that
hole as well as the shower's. These men were very receptive!! And at the conclusion they said
please write us if you have any other issue's. I have since sent them a detailed letter on the
issue's that we need placed in a Corrections Bill. I got idea's from guys while at recreation last
week and placed those in the letter.
I wish more of the guys back here would write about the conditions. But I also understand
everyone can't and won't do what I do, some out of fear of retaliation and other's don't have the
writing skill's. I know the Warden, Assistant Warden's, Col, Major and the half dozen
classification officers who was standing outside the door in the hallway, while I was talking to the
senators, didn't like what I was doing. But I don't care if they list it. I'm doing what I feel is
necessary to improve our lives. And I'm not going to let anyone stop me. Right now they've
taken my visit's as retaliation over writing about that Lt and the dead woman found in his FDOC
rented hotel room. While I didn't get to address my visit's in that July 16th letter. I have since
addressed the visitation suspension with them. And I also signed a release form that a U.S.
Congresswoman sent me. So she can look at the visitation suspension and the grievances.
Because it is a Federal law that we have a fair and effective grievance procedure. Which our
grievance procedure isn't worth the paper its written on. And if your in correspondence with
someone here, they'll tell you the same thing. More men back here need to step up and write
the criminal Justice committee. You never know what you can accomplish if you don't try. In
2019 I wrote the ACA (American Correctional Association). And during their 2019 audit I was
pulled out into the interview rooms, and spoke with a Mr Albeno who was head of the ACA audit
here at UCI. We spoke for quite sometime, while again the administration stood out in the
hallway. You just never know what you can do. I try to encourage these men to write. And I
understand their apprehension worrying over retaliation. And other's think oh its not going to
make a difference. And with that attitude its not going to make a difference. Because can't never
could do anything. But I will not stop trying to encourage these men to write and stand up, and
try to bring about change. Look I'm the most flawed individual there is! My past haunt's me! But I
will try to make up for all my past transgressions by helping those who will follow on his path,
long after I'm gone. That is all I can do. But if your writing someone in the department of
corrections whether it be in Florida, or wherever, encourage them to fight for change. And then
stand with them through the pit falls of retaliation. Yes they will retaliate. When they do, well you
know then that your making progress. lol. God bless you all. And continue to fight the good fight.
Or as Congressman John Lewis said, "Cause good trouble."
Sincerely Ronald W. Clark Jr.#812974