Fighting solitary confinement and the FDOC 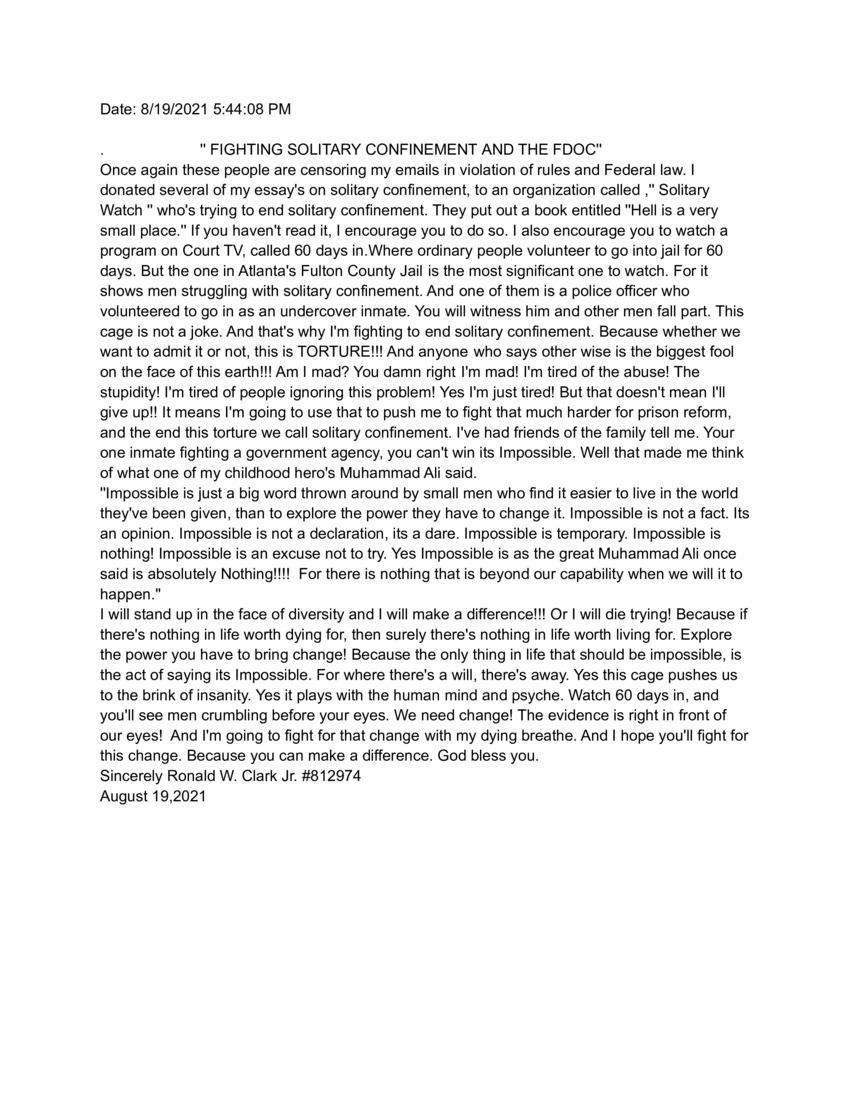 Date 8/19/2021
"FIGHTING SOLITARY CONFINEMENT AND THE FDOC"
Once again these people are censoring my emails in violation of rules and Federal law. I donated several of my essay's on solitary confinement, to an organization called, "Solitary Watch" who's trying to end solitary confinement. They put out a book entitled "Hell is a very small place." If you haven't read it, I encourage you to do so. I also encourage you to watch a program on Court TV, called 60 days in. Where ordinary people volunteer to go into jail for 60 days. But the one in Atlanta's Fulton County Jail is the most significant one to watch. For it shows men struggling with solitary confinement. And one of them is a police officer who volunteered to go in as a undercover inmate. You will witness him and other men fall part. This cage is not a joke. And that's why I'm fighting to end solitary confinement. Because whether we want to admit it or not, this is TORTURE!! And anyone who says other wise is the biggest fool on the face of this earth!!! Am I mad? You damn right I'm mad! I'm tired of the abuse! The stupidity! I'm tired of people ignoring this problem! Yes I'm just tired! But that doesn't mean I'll give up!! It means I'm going to use that to push me to fight that much harder for prison reform, and the end this torture we call solitary confinement. I've had friends of the family tell me. Your one inmate fighting a government agency, you can't win its Impossible. Well that made me think of what one of my childhood hero's Muhammad Ali said.
"Impossible is just a big word thrown around by small men who find it easier to live in the world they've been given, than to explore the power they have to change it. Impossible is not a fact. Its an opinion. Impossible is not a declaration, its a dare. Impossible is temporary. Impossible is nothing! Impossible is an excuse not to try. Yes Impossible is as the great Muhammad Ali once said is absolutely Nothing!!!! For there is nothing that is beyond our capability when we will it to happen."
I will stand up in the face of diversity and I will make a difference!!! Or I will die trying! Because if there's nothing in life worth dying for, then surely there's nothing in life worth living for. Explore the power you have to bring change! Because the only thing in life that should be impossible, is the act of saying its Impossible. For when there's a will, there's away. Yes this cage pushes us to the brink of insanity. Yes it plays with the human mind and psyche. Watch 60 days in, and you'll see men crumbling before your eyes. We need change! The evidence is right in front of our eyes! And I'm going to fight for that change with my dying breathe. And I hope you'll fight for this change. Because you can make a difference. God bless you.
Sincerely Ronald W. Clark Jr. #812974
August 19,2021