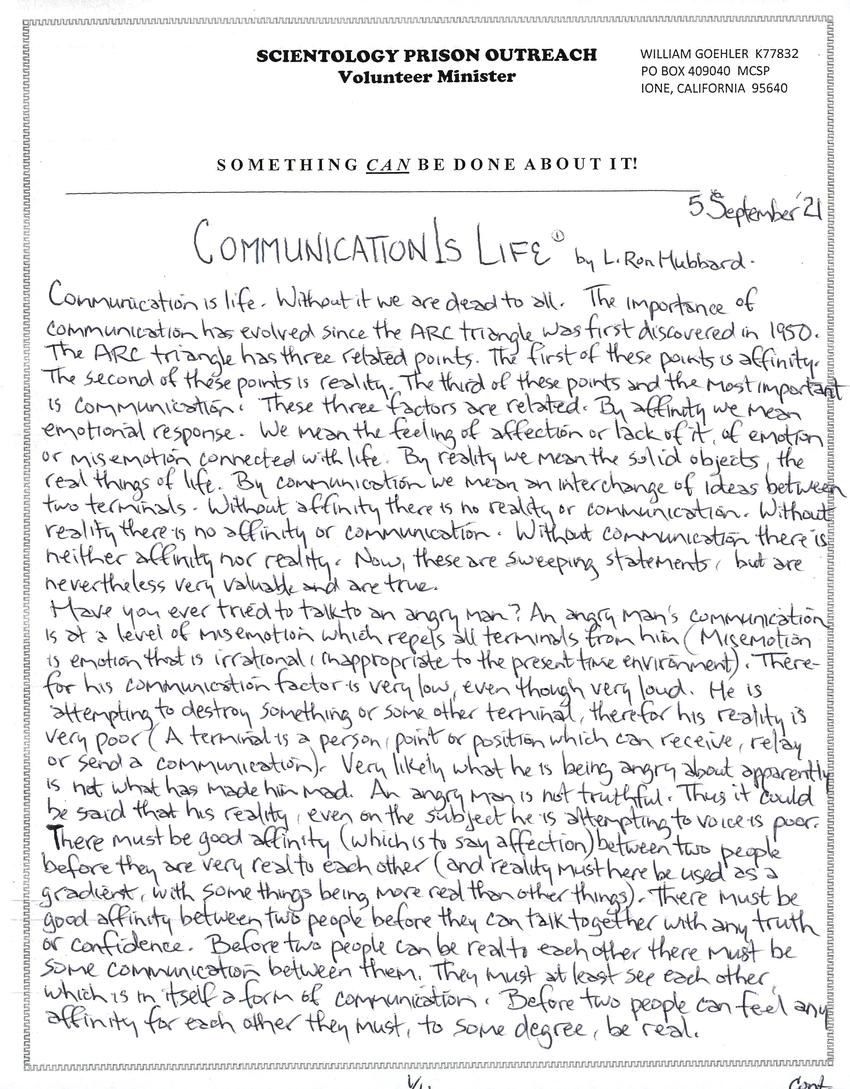 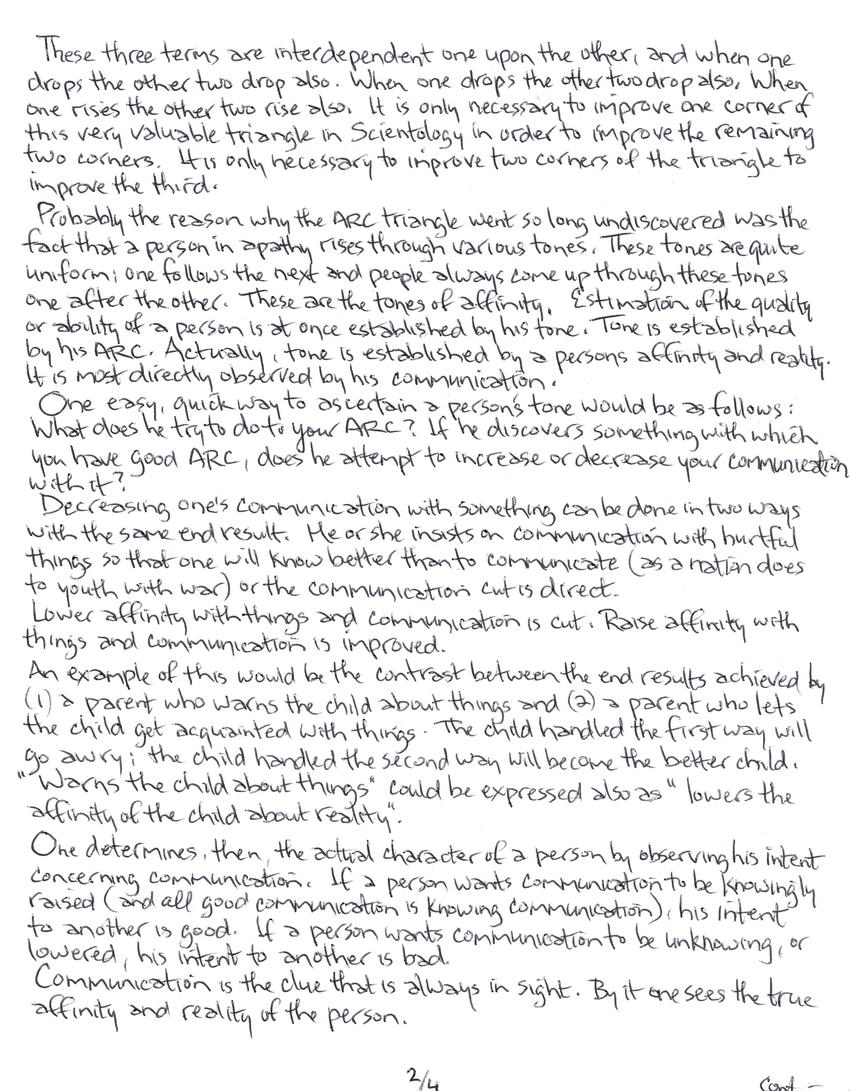 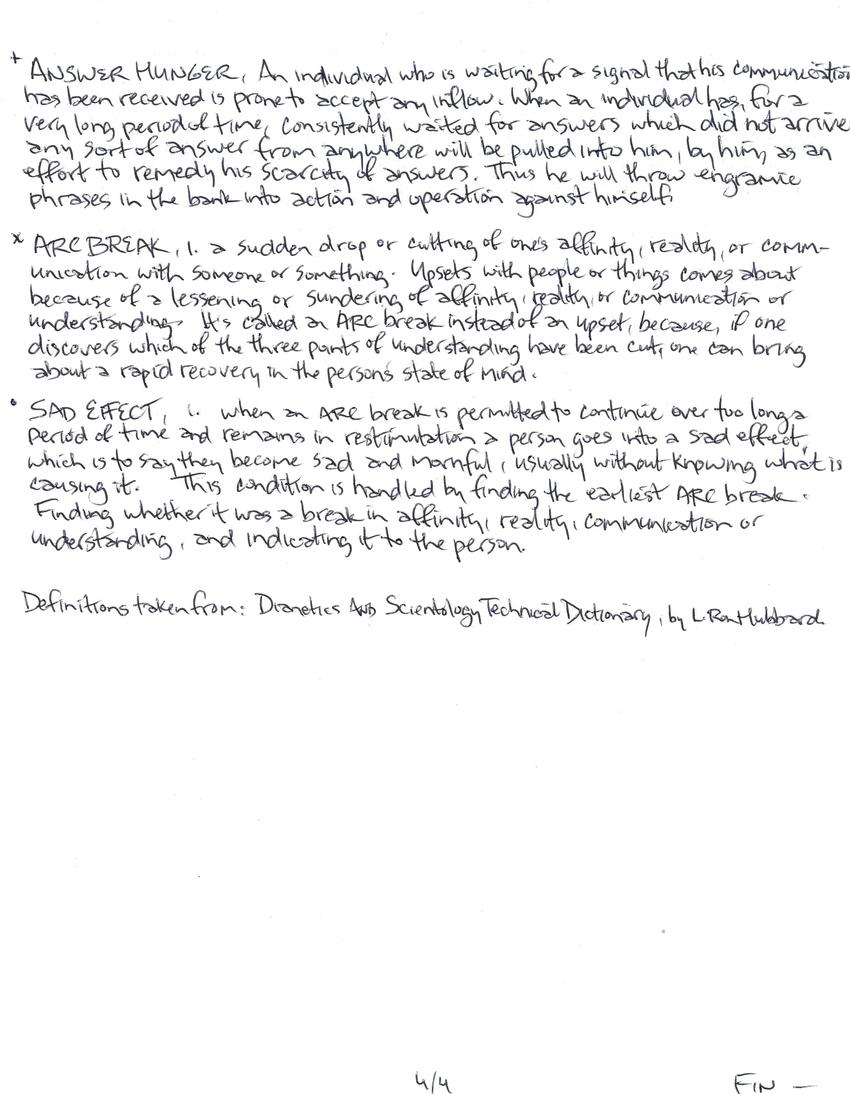 COMMUNICATION IS LIFE by L.Ron Hubbard.

Communication is life. Without it we are dead ti all. The importance of communication has evolved since the ARC triangle was first discovered in 1950. The ARC triangle has three related points. The first of these points is affinity. The second of these points is reality. The third of these points and the most important is communication. These three factors are related. By affinity we mean emotional response. We mean the feeling of affection or lack of it, of emotion or misemotion connected with life. By communication we mean an interchange of ideas between two terminals. Without affinity there is not reality or communication. Without communication there is neither affinity nor reality. Now, these are sweeping statements but are nevertheless very valuable and are true.
Have you ever tried to talk to an angry man? An angry man's communication is at a level of misemotion which repels all terminals from him (Misemotion is emotion that is irrational, inappropriate to the present time environment). Therefor his communication factor is very low, even though very loud. He is attempting to destroy something or ome other terminal, therefor his reality is very poor (A terminal is a person, point or position which can receive, relay or send a communication). Very likely what he is being angry about apparently is not what has made him mad. An angry man is not truthful. Thus it could be said that his reality, even on the subject he is attempting to voice is poor. There must be good affinity (which is to say affection) between two people before they are very real to each other (and reality must here be used as a gradient, with some things being more real that other things). There must be good affinity between two people before they can talk together with any truth or confidence. Before two people can be real to each other there must be some communication between them. They must at least see each other, which is in itself a form of communication. Before two people can feel any affinity for each other they must, to some degree, be real.

These three terms are interdependent one upon the other, and when one drops the other two drop also. When one drops the other two drop also, When one rises the other two rise also. It is only necessary to improve the remaining two corners. It is only necessary to improve two corners of the triangle to improve the third.
Probably the reason why the ARC triangle went so long undiscovered was the fact that a person in apathy rises through various tones. These tones are quite uniform; one follows the next and people always come up through these tones one after the other. These are the tones of affinity. Estimation of the quality or ability of a person is at once established by his tone. Tone is established by his ARC. Actually, tone is established by a persons affinity and reality. It is most directly observed by his communication.
One easy, quick easy to ascertain a person's tone would be as follows: What does he try to do to your ARC? If he discovers something with which you have good ARC, does he attempt to increase or decrease your communication with it?
Decreasing one's communication with something can be done in two ways with the same end result. He or she insists on communication with hurtful things so that one will know better than to communicate (as a nation does to youth with war) or the communication is cut direct.
Lower affinity with things and communication is cut. Raise affinity with things and communication is improved.
An example of this would be the contrast between the end result achieved by (1) a parent who warns the child about things and (2) a parent who lets the child get acquainted with things. The child handled the first way will go awry; the child handled the second way will become the better child. "Warns the child about things" could be expressed also as "lowers the affinity of the child about reality".
One determines then, the actual character of a person by observing his intent concerning communication. If a person wants communication to be knowingly raised (and all good communication is knowing communication), his intent to another is good. If a person wants communication to be unknowing, or lowered, his intent to another is bad.
Communication is the clue that is always in sight. By it one sees the true affinity and reality of the person.

When another tries to chop your ARC with something, it is a good thing to decoy him into believing you have ARC with something else and see how he handles that. He, by cutting away, seeks to make you a victim of his game. It becomes an amusing game when you fully understand ARC. The difference will be - you will be playing a knowing game - the other person will only be dramatizing (by which is ment acting under the influence of past incidents, puppet-like).
Many a budding Scientologist has been squelched by someone chopping his ARC with Scientology when in actuality it was merely someone chopping his ARC.
Communication is the clue. If you can handle communication in or out, you can win.

"Without communication there is neither affinity nor reality", L.Ron said. Understanding "tone is established by a persons affinity and reality", it is an ennobling honor to be in communication with L.Ron Hubbard, and having this opportunity betweenthebars to share this religious education with other - who may share it with others. The wrong thing to do is nothing! Sometimes a lack of communication can cause a phenomena known as Answer Hunger*. ARC Breaks* also produce a sad effect* in people who lack understanding and maybe otherwise overwhelmed by life in general. Do them a favor and initiate communication with them about things, activities or subjects of which everyone is in favor. Share what you learned in this - or other sermons, Share the above video sites. Anything is better than nothing. Be blessed in your Blessings - Knowing you've done your best to help improve conditions

*ANSWER HUNGER, An individual who is waiting for a signal this his communication has been received is prone to accept any inflow. When an individual has, for a very long period of time, consistently waited for answers which did not arrive and sort of answer from anywhere will be pulled into him, by him, as an effort to remedy his scarcity of answers. Thus he will throe engramie phrases in the bank into action and operation against himself.

*ARC BREAK, 1. a sudden drop or cutting of one's affinity, reality, or communication of a lessening or sundering of affinity, reality, or communication or understanding. It's called a ARC break instead of an upset, because if one discovers which of the three parts of understanding have been cut, one can bring about a rapid recovery in the persons state of mind.

*SAD EFFECT, 1. When an ARC break is permitted to continue over too long a period of time and remains restimutation a person goes into a sad effect. Which is to say they become sad and mornful, usually without knowing what is causing it. This condition is handled by finding the earliest ARC break. Finding whether it was a break in affinity, reality, communication or understanding, and indication it to the person.