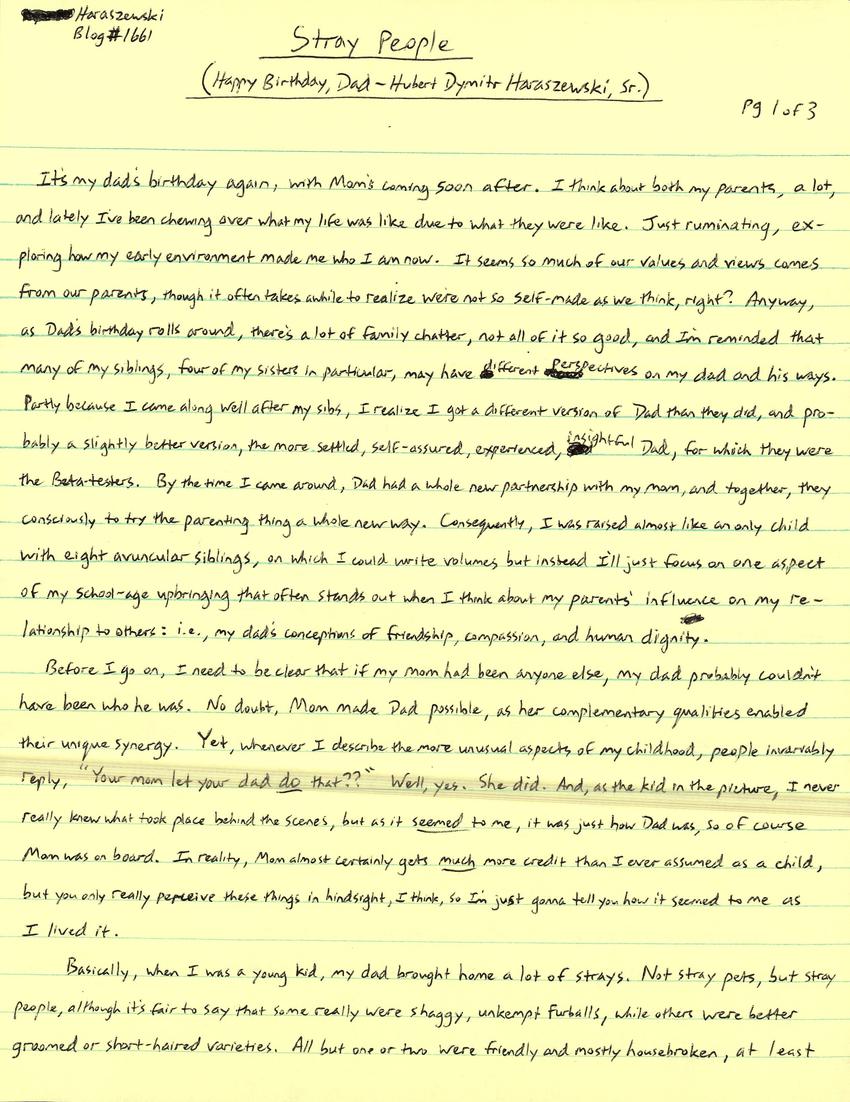 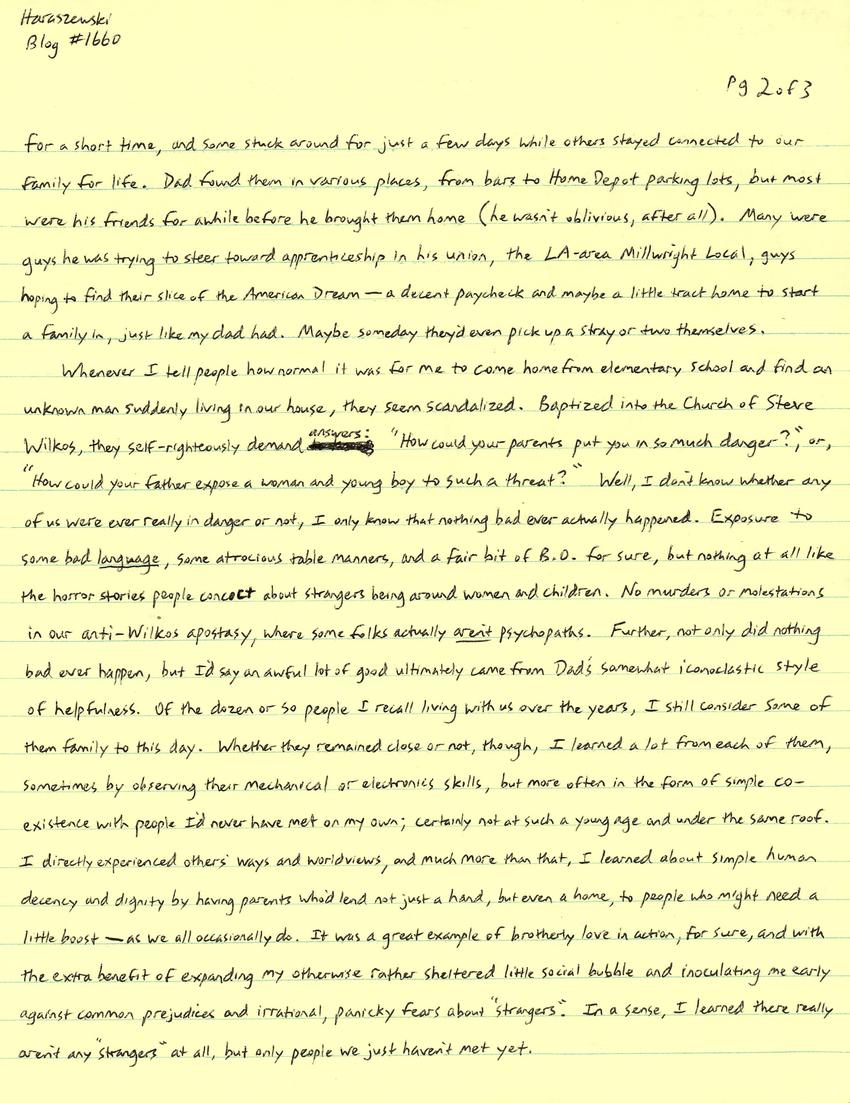 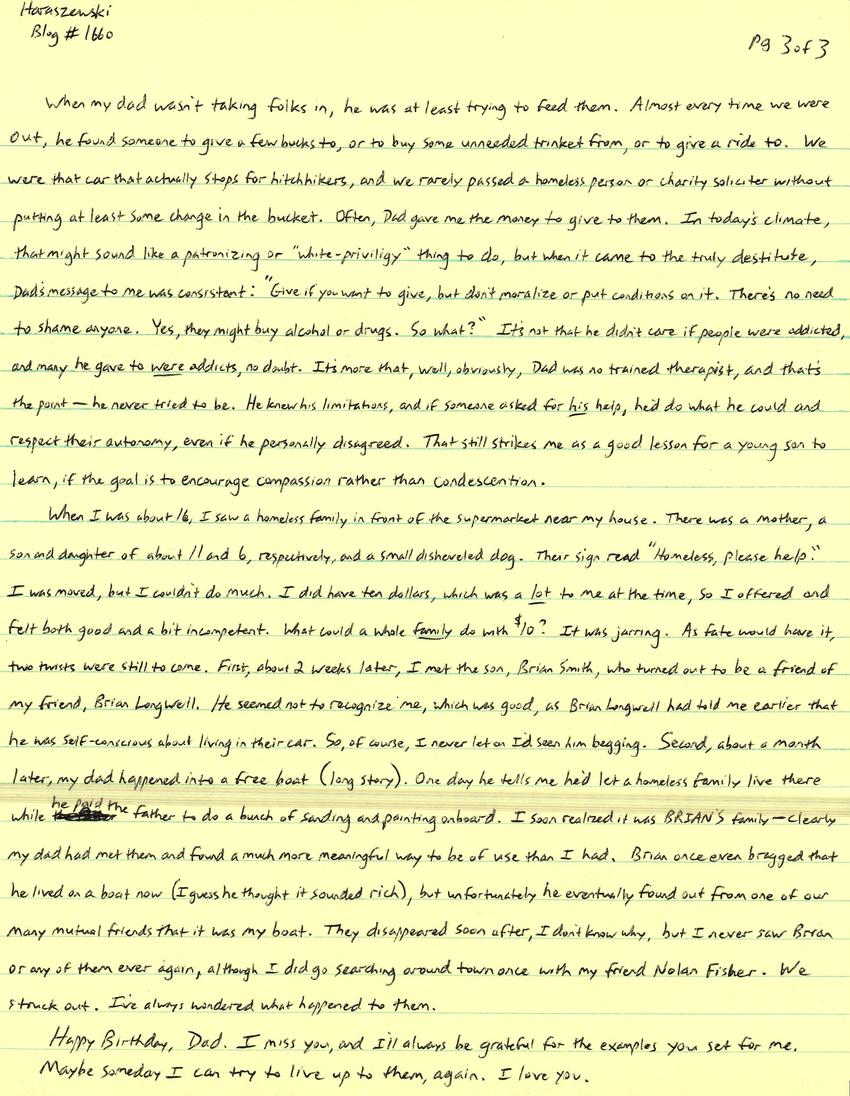 It's my dad's birthday again, with mom's coming soon after. I think about both my parents, a lot, and lately I've been chewing over what my life was like due to what they were like. Just ruminating, exploring how my early environment made me who I am now. It seems so much of our values and views comes from our parents, though it often takes awhile to realize we're not so self-made as we think, right? Anyway, as Dad's birthday rolls around, there's a lot of family chatter, not all of it so good, and I'm reminded that many of my siblings, four of my sisters in particular, may have different perspectives on my dad and his ways. Partly because I came along well after my sibs, I realize I got a different version of Dad than they did, and probably a slightly better version, the more settled, self-assured, experienced, insightful Dad, for which they were Beta-testers. By the time I came around, Dad had a whole new partnership with my mom, and together, they consciously to try the parenting thing a whole new way. Consequently, I was raised almost like an only child with eight avuncular siblings, on which I could write volumes but instead I'll just focus on one aspect of my school-age upbringing that often stands out when I think about my parents' influence on my relationship to others: i.e., my dad's conceptions of friendship, compassion, and human dignity.
Before I go on, I need to be clear that if my mom had been with anyone else, my dad probably couldn't have been who he was. No doubt, mom made dad possible, as her complementary qualities enabled their unique synergy. Yet, whenever I describe the more unusual aspects of my childhood, people invariably reply, "Your mom let your dad do that??" Well yes. She did. And, as the kid in the picture, I never really knew what took place behind the scenes, but as it seemed to me, it was just how Dad was, so of course mom was on board. In reality, mom almost certainly gets much more credit than I ever assumed as a child, but you only really perceive these things in hindsight, I think, so I'm just gonna tell you how it seemed to me as I lived it.
Basically, when I was a young kid, my dad brought home a lot of strays. Not stray pets, but stray people, although it's fair to say that some really were shaggy, unkept furballs, while others were better groomed or short-haired varieties. All but one or two were friendly and mostly housebroken, at least

for a short time, and some stuck around for just a few days while others stayed connected to our family for life. Dad found them in various places, from bars to Home Depot parking lots, but most were his friends for awhile before he brought them home (he wasn't oblivious, after all). Many were guys trying to steer toward apprenticeship in his union, the LA-area Millwright Local, guys hoping to find their slice of the American Dream - a decent paycheck and maybe a little tract home to start a family in, just like my dad had. Maybe someday they'd even pick up a stray or two themselves.
WHenever I tell people how normal it was for me to come home from elementary school and find an unknown man suddenly living in our house, they seem scandalized. Baptized into the Church of Steve Wiloks, they self-righteously demand answers: "How could your parents put you in so much danger?", or, "How could your father expose a woman and young boy to such a threat?" Well, I don't know whether any of us were ever really in danger or not, I only know that nothing bad ever actually happened. Exposure to some bad languages, some atrocious table manners, and a fair bit of B.O. for sure, but nothing at all like the horror stories people concoct about strangers being around women and children. No murders or molestations in our anti-Wilkos apostasy, where some folks actually aren't psychopaths. Further, not only did nothing bad ever happen, but I'd say an awful lot of good ultimately came from Dad's somewhat iconoclastic style of helpfulness. Of the dozen or so people I recall living with us over the years, I still consider some of them family to this day. Whether they remained close or not, though, I learned a lot from each of them, sometimes by observing their mechanical or electronics skills, but more often in the form of simple coexistence with people I'd never have met on my own; certainly not at such a young age and under the same roof. I directly experienced others' ways and worldviews, and much more than that, I learned about simple human decency and dignity by having parents who'd lend not just a hand, but even a home, to people who might need a little boost - as we all occasionally do. It was a great example of brotherly love in action, for sure, and with the extra benefit of expanding my otherwise rather sheltered little social bubble and inoculating me early against common prejudices and irrational, panicky fears about "strangers". In a sense, I learned there really aren't any "strangers" at all, but only people we just haven't met yet.

When my dad wasn't taking folks in, he was at least trying to feed them. Almost every time we were out, he found someone to give a few bucks to, or to buy some unneeded trinket from, or to give a ride to. We were that car that actually stops for hitchhikers, and we rarely passed a homeless person or charity solicitor without putting at least some change in the bucket. Often, Dad gave me the money to give to them. In today's climate, that might sound like a patronizing or "white-privilgy" thing to do, but when it came to the truly destitute, Dad's message to me was consistent: "Give if you want to give, but don't moralize or put conditions on it. There's no need to shame anyone. Yes, they might buy alcohol or drugs. So what?" It's not that he didn't care if people were addicted, and many he gave to were addicts, no doubt. It's more that, well, obviously, Dad was no trained therapist, and that's the point - he never tried to be. He knew his limitations, and if someone asked for his help, he'd do what he could and respect their autonomy, even if he personally disagreed. That still strikes me as a good lesson for a young son to learn, if the goal is to encourage compassion rather than condescension.
When I was about 16, I saw a homeless family in front of the supermarket near my house. There was a mother, a son and daughter of about 11 and 6, respectively, and a small disheveled dog. Their sign read "Homeless, people help." I was moved, but I couldn't do much. I did have ten dollars, which was a lot to me at the time, so I offered and felt both good and a bit incompetent. What could a whole family do with $10? It was jarring. As fate would have it, two twists were still to come. First, about 2 weeks later, I met the son, Brian Smith, who turned out to be a friend of my friend, Brian Longwell. He seemed not to recognize me, which was good, as Brian Longwell had told me earlier that he was self-conscious about living in their car. So, of course, I never let on I'd seen him begging. Second, about a month later, my dad happened into a free boat (long story). One day he tells me he'd let a homeless family live there while he paid the father to do a bunch of sanding and painting onboard. I soon realized it was BRIAN'S family - clearly my dad had met them and found a more meaningful way to be of use than I had. Brian once even bragged that he lived on a boat now (I guess he thought it sounded rich), but unfortunately he eventually found out from one of our many mutual friends that it was my boat. They disappeared soon after, I don't know why, but I never saw Brian or any of them ever again, although I did go searching around town once with my friend Nolan Fisher. We struck out. I've always wondered what happened to them.
Happy Birthday, Dad. I miss you, and I'll always be grateful for the examples you set for me. Maybe someday I can try to live up to them, again. I love you.