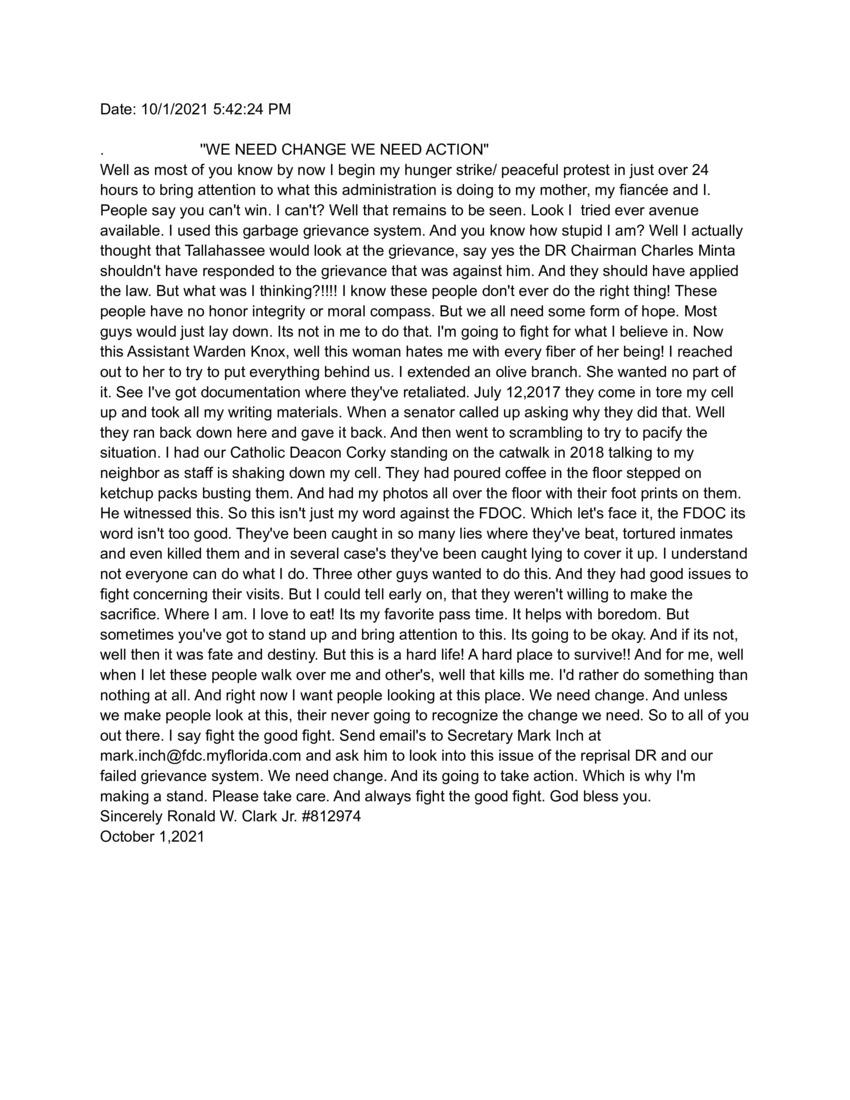 "WE NEED CHANGE WE NEED ACTION"
Well as most of you know by now I begin my hunger strike/ peaceful protest in just over 24
hours to bring attention to what this administration is doing to my mother, my fiancée and I.
People say you can't win. I can't? Well that remains to be seen. Look l tried ever avenue
available. I used this garbage grievance system. And you know how stupid I am? Well l actually
thought that Tallahassee would look at the grievance, say yes the DR Chairman Charles Minta
shouldn't have responded to the grievance that was against him. And they should have applied
the law. But what was I thinking?!!!! I know these people don't ever do the right thing! These
people have no honor integrity or moral compass. But we all need some form of hope. Most
guys would just lay down. Its not in me to do that. 'm going to fight for what I believe in. Now
this Assistant Warden Knox, well this woman hates me with every fiber of her being! I reached
out to her to try to put everything behind us. I extended an olive branch. She wanted no part of
it. See l've got documentation where they've retaliated. July 12,2017 they come in tore my cell
up and took all my writing materials. When a senator called up asking why they did that. Well
they ran back down here and gave it back. And then went to scrambling to try to pacify the
situation. I had our Catholic Deacon Corky standing on the catwalk in 2018 talking to my
neighbor as staff is shaking down my cell. They had poured coffee in the floor stepped on
ketchup packs busting them. And had my photos all over the floor with their foot prints on them.
He witnessed this. So this isn't just my word against the FDOC. Which let's face it, the FDOC its
word isn't too good. They've been caught in so many lies where they've beat, tortured inmates
and even killed them and in several case's they've been caught lying to cover it up. I understand
not everyone can do what I do. Three other guys wanted to do this. And they had good issues to
fight concerning their visits. But I could tell early on, that they weren't willing to make the
sacrifice. Where I am. I love to eat! Its my favorite pass time. It helps with boredom. But
sometimes you've got to stand up and bring attention to this. Its going to be okay. And if its not,
well then it was fate and destiny. But this is a hard life! A hard place to survive!! And for me, well
when I let these people walk over me and others, well that kills me. rd rather do something than
nothing at all. And right now I want people looking at this place. We need change. And unless
we make people look at this, their never going to recognize the change we need. So to all of you
out there. I say fight the good fight. Send email's to Secretary Mark Inch at
mark.inch@fdc.myflorida.com and ask him to look into this issue of the reprisal DR and our
failed grievance system. We need change. And its going to take action. Which is why I'm
making a stand. Please take care. And always fight the good fight. God bless you.
Sincerely Ronald W. Clark Jr. #812974
October 1,2021