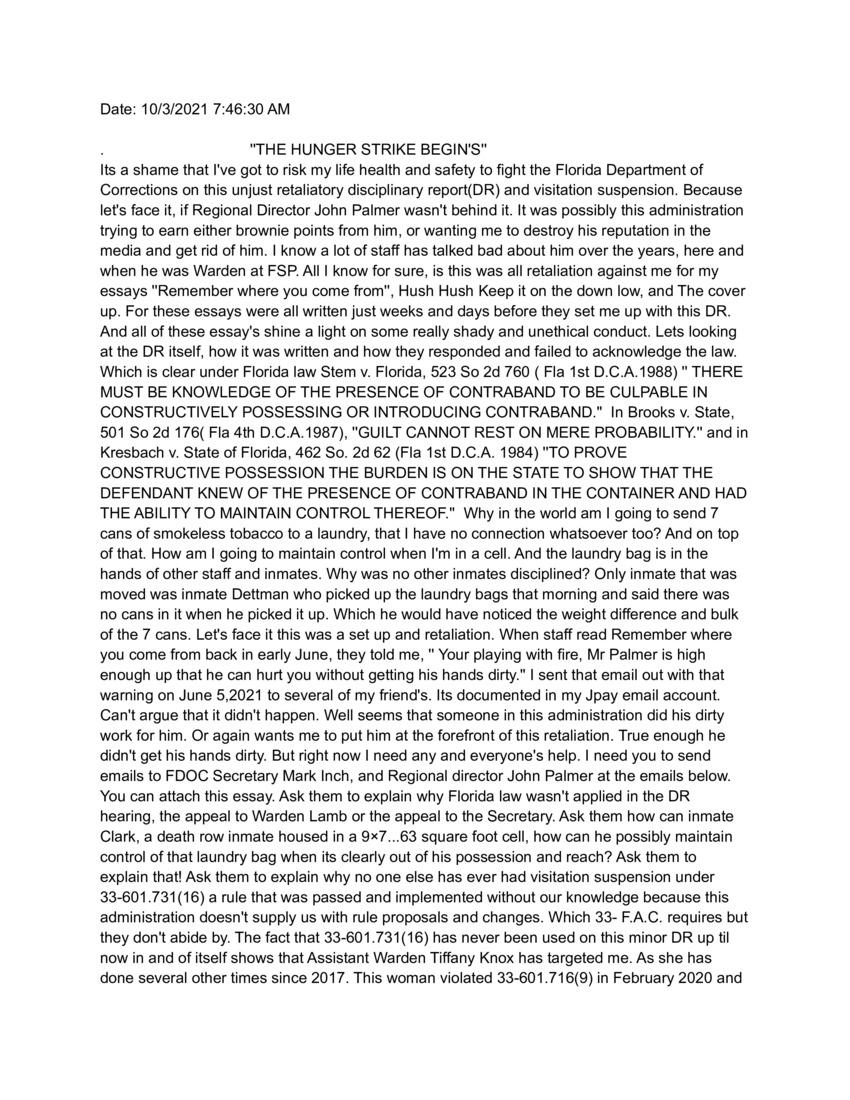 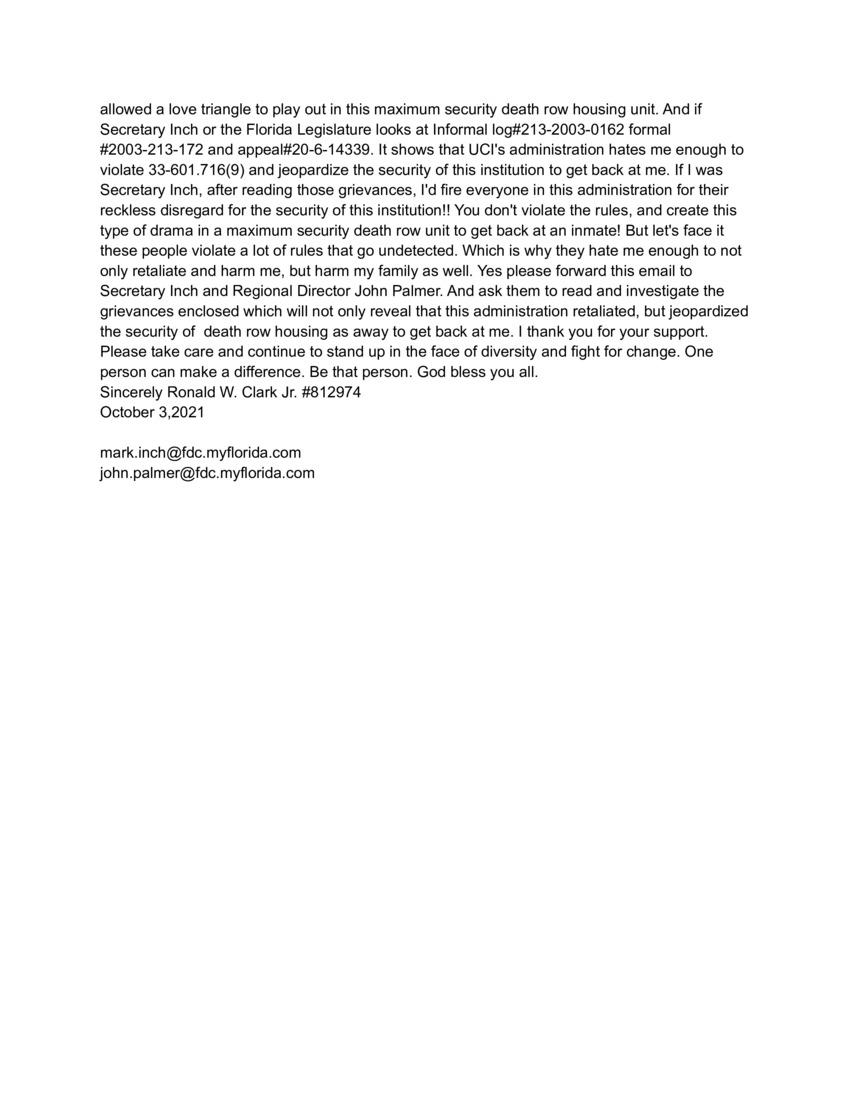 Date: 10/3/2021 7:46:30 AM
"The Hunger Strike Begin's"
Its a shame that I've got to risk my life health and safety to fight Florida Department of Corrections on this unjust retaliatory disciplinary report(DR) and visitation suspension. Because let's face it, if Regional Director John Palmer wasn't behind it. It was possibly this administration trying to earn either brownie points from him, or wanting me to destroy his reputation in the media and get rid of him. I know a lot of staff has talked bad about him over the years, here and when he was Warden at FSP. All I know for sure, is this was all retaliation against me for my essays "Remember where you com from", Hush Hush Keep it on the down low, and The cover up. For these essays were all written just weeks and days before they set me up with this DR. And all of these essay's shine a light on some real shady and unethical conduct. Lets looking at DR itself, how it was written and how they responded and failed to acknowledge the law. Which is clear under Florida law Stem v. Florida, 523 So 2d 760 ( Fla 1st D.C.A. 1988) " THERE MUST BE KNOWLEDGE OF THE PRESENCE OF CONTRABAND TO BE CULPABLE IN CONSTRUCTIVLEY POSSESSING OR INTRODUCING CONTRABAND." In Brooks v. State, 501 So 2d 176( Fla 4th D.C.A. 1987), "GUILT CANNOT REST ON MERE PROBABILITY." and in Kresbach v. State of Florida, 462 So. 2d 62 (Fla 1st D.C.A. 1984) "TO PROVE CONSTRUCTIVE POSSESSION THE BURDEN IS ON THE STATE TO SHOW THAT THE DEFENDANT KNEW OF THE PRESENCE OF CONTRABAND IN THE CONTAINER AND HAD THE ABILITY TO MAINTAIN CONTROL THEREOF." Why in the world am I going to send 7 cans of smokeless tobacco to a laundry, that I have no connection whatsoever too? And on top of that. How am I going to maintain control when I'm in a cell. And the laundry bag is in the hands of other staff and inmates. Why was no other inmates disciplined? Only inmate that was moved was inmate Dettman who picked up the laundry bags that morning and said there was no cans in it when he picked it up. Which he would have noticed the weight difference and bulk of the 7 cans. Let's face it this was a set up and retaliation. when staff read Remember where you come from back in early June, they told me, " Your playing with fire, Mr Palmer is high enough up that he can hurt you without getting his hands dirty." I sent that email out with that warning on June 5,2021 to several of my friend's. Its documented in my Jpay email account. Can't argue that it didn't happen. Well seems that someone in this administration did his dirty work for him. Or again wants me to put him at the forefront of this retaliation. True enough he didn't get his hands dirty. But right now I need any and everyone's help. I need you to send emails to FDOC Secretary Mark Inch, and Regional director John Palmer at the emails below. You can attach this essay. Ask them to explain why Florida law wasn't applied in the DR hearing, the appeal to Warden Lamb or the appeal to the Secretary. Ask them how can inmate Clark, a death row inmate housed in a 9x7...63 square foot cell, how can he possibly maintain control of that laundry bag when its clearly out of his possession and reach? Ask them to explain that! Ask them to explain why no one else has ever had visitation suspension under 33-601.731(16) a rule that was passed and implemented without our knowledge because this administration doesn't supply us with rule proposals and changes. Which 33-F.A.C. requires but they don't abide by. The fact that 33-601.731(16) has never been used on this minor DR up til now in and of itself shows that Assistant Warden Tiffany Knox has targeted me. As she has done several other times since 2017. This woman violated 33-601.716(9) in February 2020 and allowed a love triangle to play out in this maximum security death row housing unit. And if Secretary Inch of Florida Legislature looks at Informal log#213-2003-0162 formal #2003-213-172 and appeal#20-6-14339. It shows that UCI's administration hates me enough to violate 33-6101.716(9) and jeopardize the security of this institution to get back at me. If I was Secretary Inch, after reading those grievances, I'd fire everyone in this administration for their reckless disregard for the security of this institution!! You don't violate the rules, and create this type of drama in a maximum security death row unit to get back at an inmate! But let's face it these people violate a lot of rules that go undetected. Which is why they hate me enough to not only retaliate and harm me, but harm my family as well. Yes please forward this email to Secretary Inch and Reginal Director John Palmer. And ask them to read and investigate the grievances enclosed which will not only reveal that this administration retaliated, but jeopardized the security of death row housing as away to get back at me. I thank you for your support. person can make a difference. Be that person. God Bless you all.
Sincerely Ronald W. Clark Jr. #812974
October 3,2021