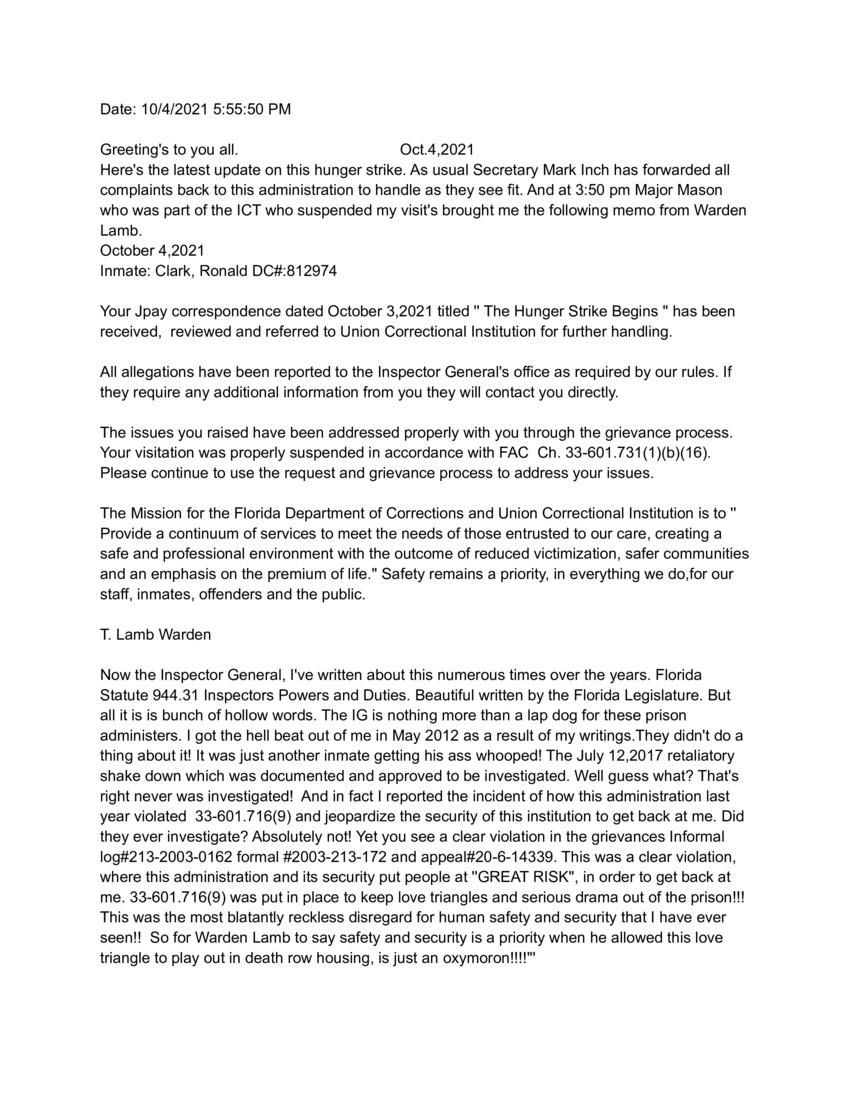 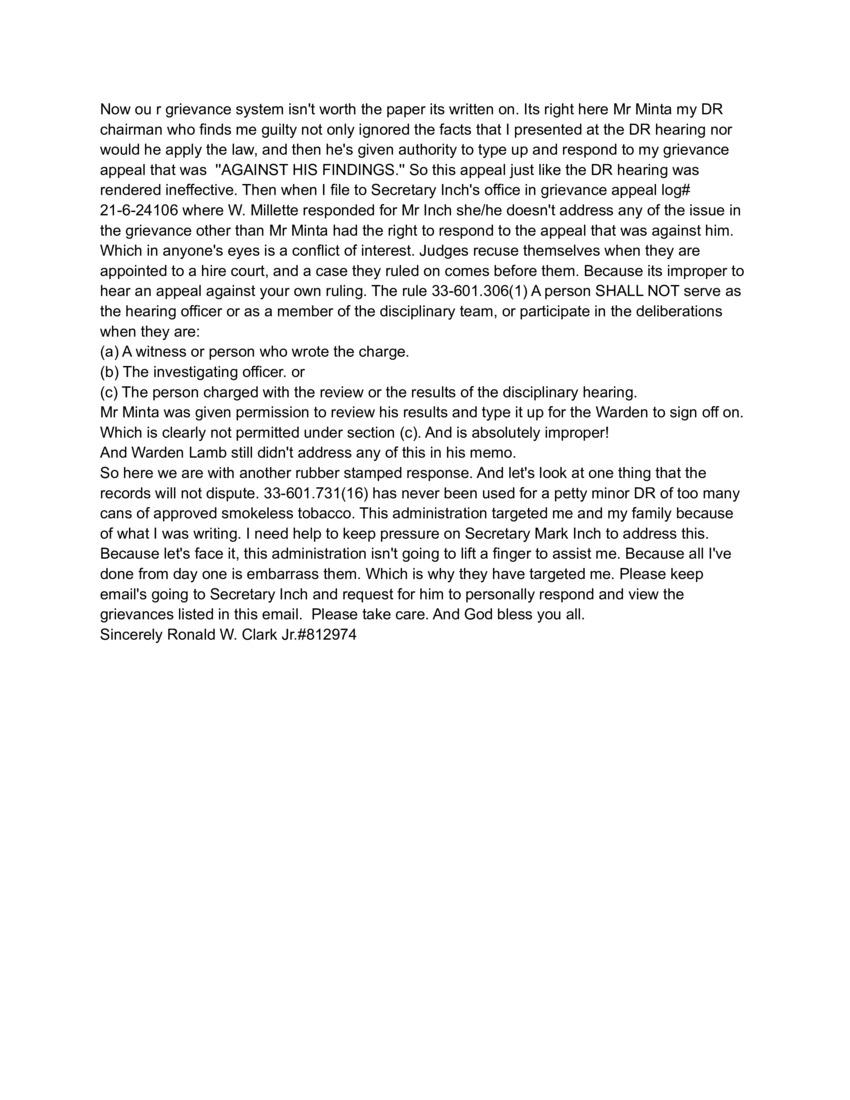 Greeting's to you all. Oct.4,2021
Here's the latest update on this hunger strike. As usual Secretary Mark Inch has forwarded all complaints back to this administration to handle as they see fit. And at 3:50 pm Major Mason who was part of the ICT who suspended my visiVs brought me the following memo from Warden Lamb.
October 4,2021
Inmate: Clark, Ronald DC/#:812974

Your Jpay correspondence dated October 3,2021 titled "The Hunger Strike Begins " has been received, reviewed and referred to Union Correctional Institution for further handling.

All allegations have been reported to the Inspector General's office as required by our rules. If they require any additional information frorn you they will contact you directly.

The issues you raised have been addressed properly with you through the grievance process. Your visitation was properly suspended in accordance with FAG Ch. 33-601.731(1)(b)(16). Please continue to use the request and grievance process to address your issues.

The Mission for the Florida Department of Corrections and Union Correctional Institution is to "Provide a continuum of services to meet the needs of those entrusted to our care, creating a safe and professional environment with the outcome of reduced victimization, safer communities and an emphasis on the premium of life." Safety remains a priority, in everything we do,for our staff, inmates, offenders and the public.

Now the Inspector General, I've written about this numerous times over the years. Florida Statute 944.31 Inspectors Powers and Duties. Beautiful written by the Florida Legislature. But all it is is bunch of hollow words. The IG is nothing more than a lap dog for these prison administers. I got the hell beat out of its in May 2012 as a result of my writings.They didn't do a thing about it! It was just another inmate getting his ass whooped! The July 12,2017 retaliatory shake down which was documented and approved to be investigated. Well guess what? That's right never was investigated! And in 14/ti reported the incident of how this administration last year violated 33-601.716(9) and jeopardize the security of this institution to get back at me. Did they ever investigate? Absolutely not Yet you see a clear violation in the grievances Informal 100213-2003-0162 formal #2003-213-172 and appeal#20-6-14339. This was a clear violation, where this administration and i. security put people at "GREAT RISK", in order to get back at me. 33-601.716(9) was put in place to keep love triangles and serious drama 991 81 the prison!!! This was the most blatantly reckless disregard for human safety and security that I have ever seen!! So for Warden Lamb to say safety and security is a priority when he allowed this love triangle to play out in death row housing, is just an oxymoron!!!!'"

Now our grievance system isn't worth the paper it's written on. It's right here Mr Minta my DR chairman who finds me guilty not only ignored the facts that I presented at the DR hearing nor would he apply the law, and then he's given authority to type up and respond to my grievance appeal that was "AGAINST HIS FINDINGS." So this appeal just like the DR hearing was rendered ineffective. Then when I file to Secretary Inch's office in grievance appeal log. 21-6-24106 where W. Millette respo.ed for Mr Inch she/he doesn't address any of the issue in the grievance other than Mr Minta had the right to respond to the appeal that was against him. Which in anyone's eyes is a conflict of interest. Judges recuse themselves when they are appointed to a hire court, and a case they ruled on comes before them. Because its improper to hear an appeal against your own ruling. The rule 33-601.306(1)A person SHALL NOT serve as the hearing officer or as a member of the disciplinary team, or participate in the deliberations when they are:
(a)A witness or person who wrote the charge.
(b) The investigating officer. or
(c) The person charged with the review or the results of the disciplinary hearing. Mr Minta was given permission to review his results and type it up for the Warden to sign off on. Which is clearly not permitted under section (c). And is absolutely improper! And Warden Lamb still didn't address any of this in his memo. So here we are with another rubber stamped response. And let's look at one thing that the records will not dispute. 33-601.731(16) has never been used for petty minor DR of too many cans of approved smokeless tobacco. This administration targeted me and my family because of what I was writing. I need help to keep pressure on Secretary Mark Inch to address this. Because let's face it, this administration isn't going to lifts finger to assist me. Because all I've done from day one is embarrass them. Which is why they have targeted me. Please keep email's going to Secretary Inch and request for him to personally respond and view the grievances listed in this email. Please take care. And God bless you all.
Sincerely Ronald W. Clark Jr.#812974