Notice of Objection on Settlement Agreement 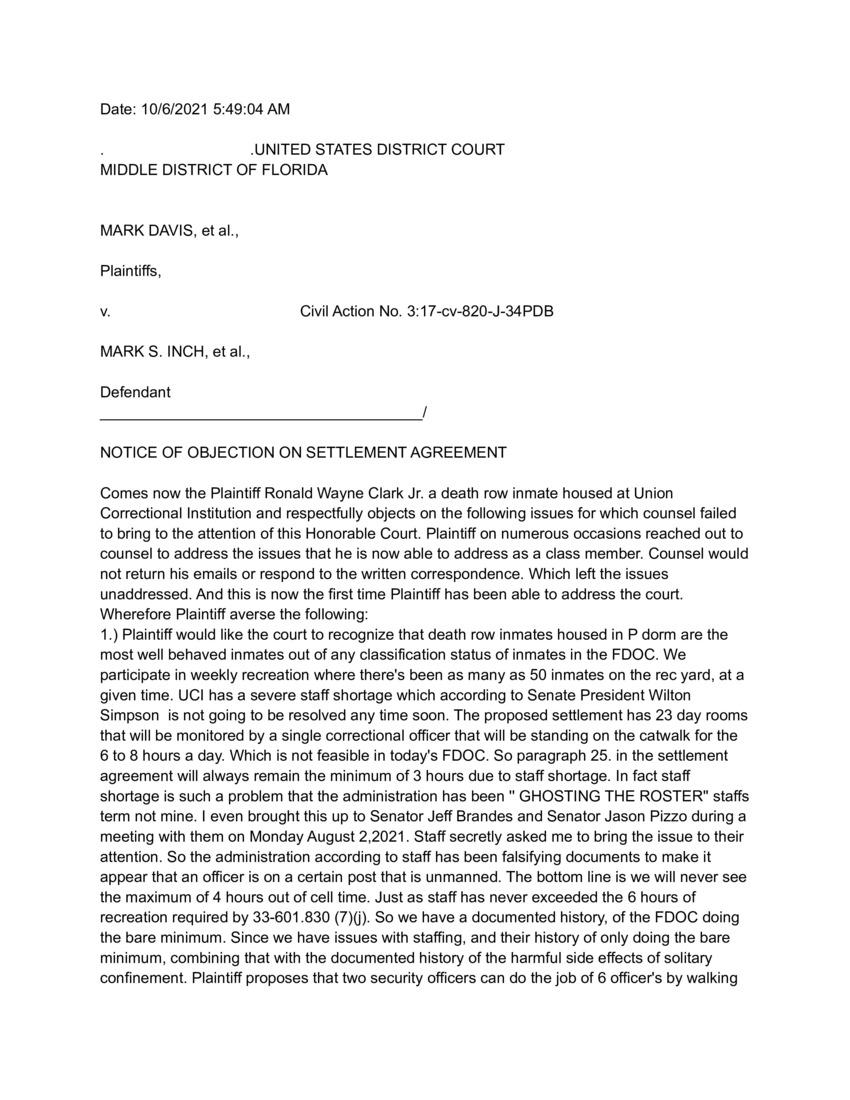 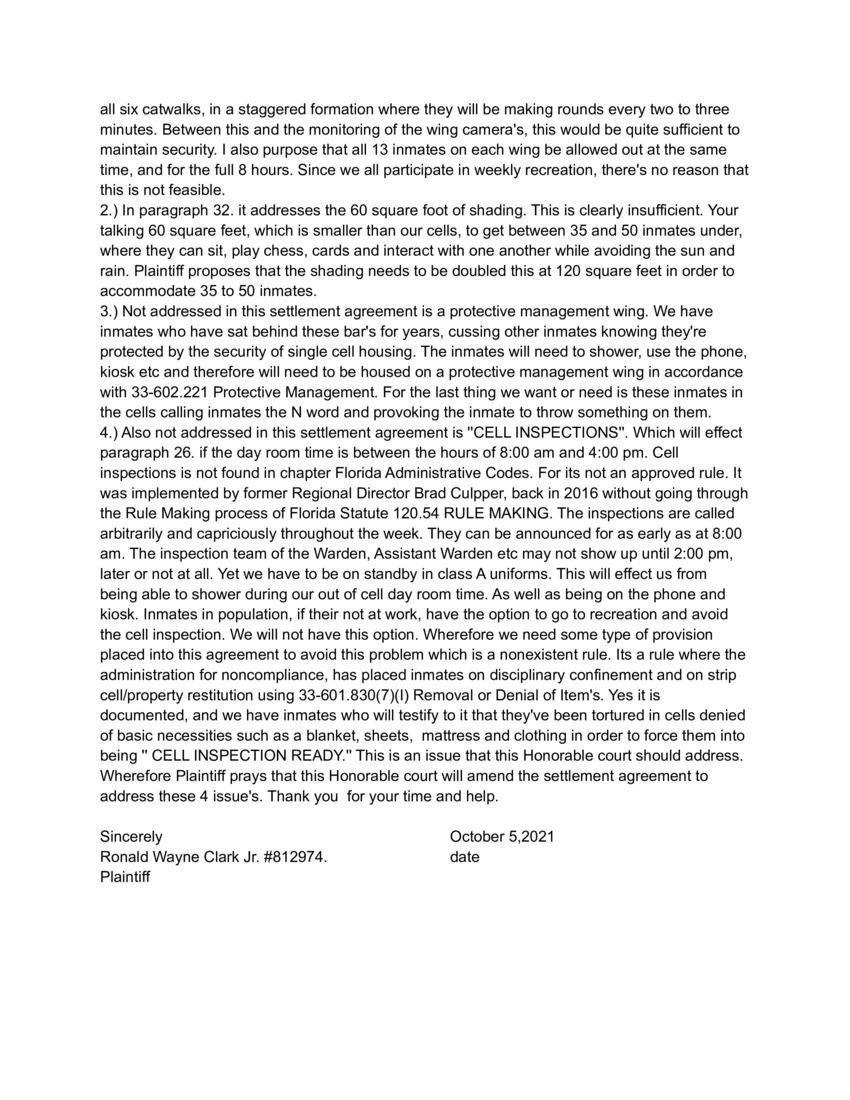 NOTICE OF OBJECTION ON SETTLEMENT AGREEMENT

Comes now the Plaintiff Ronald Wayne Clark Jr. a death row inmate housed at Union
Correctional Institution and respectfully objects on the following issues for which counsel failed
to bring to the attention of this Honorable Court. Plaintiff on numerous occasions reached out to
counsel to address the issues that he is now able to address as a class member. Counsel would
not return his emails or respond to the written correspondence. Which left the issues
unaddressed. And this is now the first time Plaintiff has been able to address the court.
Wherefore Plaintiff averse the following:
1.) Plaintiff would like the court to recognize that death row inmates housed in P dorm are the
most well behaved inmates out of any classification status of inmates in the FDOC. We
participate in weekly recreation where there's been as many as 50 inmates on the rec yard, at a
given time. UCI has a severe staff shortage which according to Senate President Wilton
Simpson is not going to be resolved any time soon. The proposed settlement has 23 day rooms
that will be monitored by a single correctional officer that will be standing on the catwalk for the
6 to 8 hours a day. Which is not feasible in today, FDOC. So paragraph 25. in the settlement
agreement will always remain the minimum of 3 hours due to staff shortage. In fact staff
shortage is such a problem that the administration has been "GHOSTING THE ROSTER" staffs
term not mine. I even brought this up to Senator Jeff Brandes and Senator Jason Pizzo during a
meeting with them on Monday August 2,2021. Staff secretly asked me to bring the issue to their
attention. So the administration according to staff has been falsifying documents to make it
appear that an officer is on a certain post that is unmanned. The bottom line is we will never see
the maximum of 4 hours out of cell time. Just as staff has never exceeded the 6 hours of
recreation required by 33-601.830(7)(j). So we have a documented history of FDOC doing
the bare minimum. Since we have issues with staffing, and their history of only doing the bare
minimum, combining that with the documented history of the harmful side effects of solitary
confinement. Plaintiff proposes that two security officers can do the job of 6 officers by walking
all six catwalks in a staggered formation where they wi11 be making rounds every two to three
minutes. Between this and the monitoring of the wing camera's, this would be quite sufficient to
maintain security. I also purpose that all 13 inmates on each wing be allowed out at the same
time, and for the full 8 hours. Sins we all participate in weakly recreation, there, no reason that
this is not feasible.
2.) In paragraph 32. it addresses the 60 square foot of shading. This is clearly insufficient. Your
talking 60 square feet, which is smaller than our cells, to get between 35 and 50 inmates under,
where they can sit, play chess, cards and interact with one another while avoiding the sun and
rain. Plaintiff proposes that the shading needs to be doubled this at 120 square feet in order to accommodate 35 to 50 inmates.
3.) Not addressed in this settlement agreement is a protective management wing. We have
inmates who have sat behind these bar's for years, cussing other inmates knowing they're
protected by the security of single cell housing. The inmates will need to shower, use the phone,
kiosk etc and therefore will need to be housed on a protective management wing in accordance
with 33-602.221 Protective Management. For the last thing we want or need is these inmates in
the cells calling inmates the N word and provoking the inmate to throw something on them.
4.)Also not addressed in this settlement agreement is "CELL INSPECTIONS". Which will effect
paragraph 26. if the day room time Is between the hours of 8:00 am and 4:00 pm. Cell
inspections is not found in chapter Florida Administrative Codes. For its not an approved rule. It
was implemented by former Regional Director Brad Culpper, back in 2016 without going through
the Rule Making process of Florida Statute 120.54 RULE MAKING. The inspections are called
arbitrarily and capriciously throughout the week. They can be announced for as early as at 8:00
am. The inspection team of the Warden, Assistant Warden etc may not show up until 2,00 pm,
later or not at all. Yet we have to be on standby in class A uniforms. This will effect us from
being able to shower during our out of cell day room time. As well as being on the phone and
kiosk. Inmates in population, if their not at work, have the option to go to recreation and avoid
the cell Inspection. We will not have this option. Wherefore we need some type of provision
placed into this agreement to avoid this problem which is a nonexistent rule. Its a rule where the
administration for noncompliance, has placed inmates on disciplinary confinement and on strip
cell/property restitution using 33-601.830(7)(l) Removal or Denial of Item's. Yes it is
documented, and we have inmates who will testify to it that they've been tortured in cells denied
of basic necessities such as a blanket, sheets, mattress and clothing in order to force them into
being "CELL INSPECTION READY." This is an issue that this Honorable court should address.
Wherefore Plaintiff prays that this Honorable court will amend the settlement agreement to
address these 4 issue's. Thank you for your time and help.