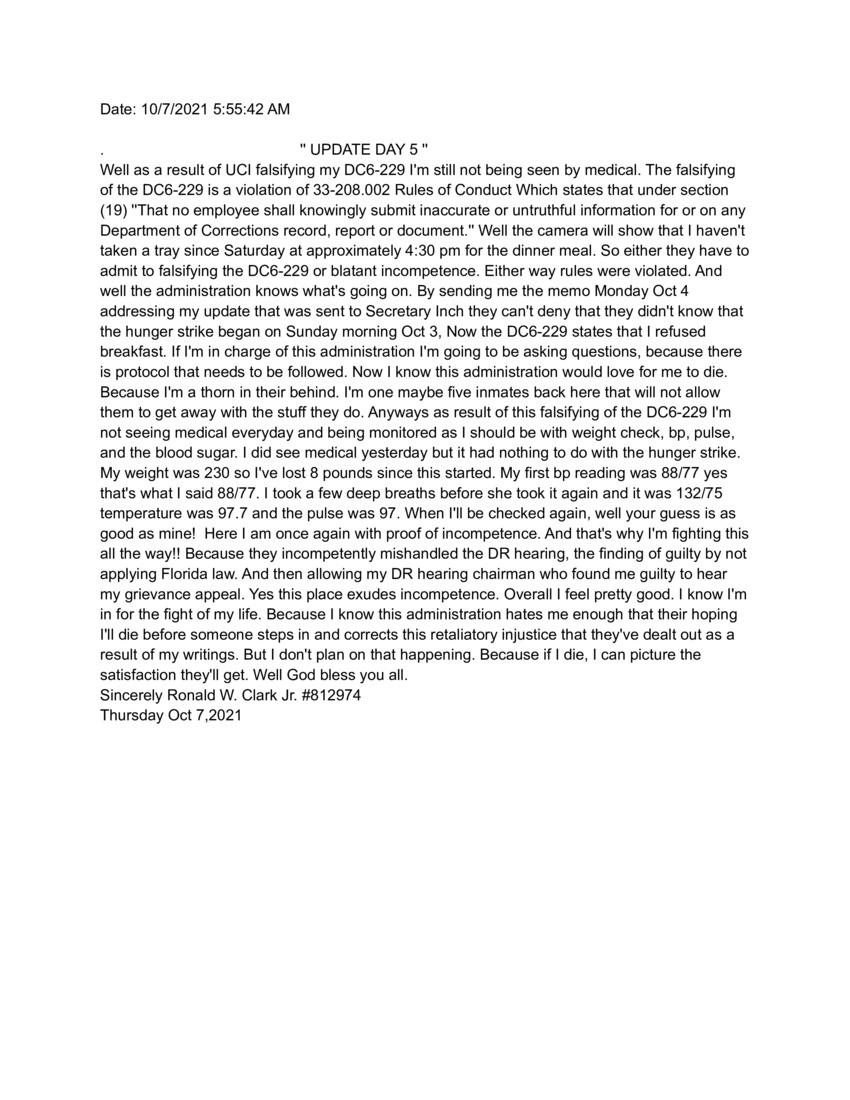 Date 10/7/2021 5:55:42 AM
"UPDATE DAY 5"
Well as a result of UCI falsifying my DC6-229 I'm still not being seen by medical. The falsifying
of the DC6-229 is a violation of 33-208.002 Rules of Conduct Which states under section
(19)"That no employee shall knowingly submit inaccurate or untruthful information for or on any
Department of Corrections record, report or document." Well the camera will show that I haven't
taken a tray since Saturday at approximately 4:30 pm for the dinner meal. So either they have to
admit to falsifying the DC6-229 or blatant incompetence. Either way rules were violated. And
well the administration knows what's going on. By sending me the meme Monday Oct 4
addressing my update that was sent to Secretary Inch they can't deny that they didn't know that
the hunger strike began on Sunday morning Oct 3, Now the DC6-229 states that I refused
breakfast. If I'm in charge of this administration I'm going to be asking questions because there
is protocol that needs to be followed. Now I know this administration would love for me to die.
Because I'm a thorn in their behind. I'm one maybe five inmates back that will not allow
them to get with the stuff they do. Anyways as result of this falsifying of the DC6-229 I'm
not seeing medical everyday and being monitored as I should be with the weight clock, bp, pulse,
and the blood sugar. I did see medical yesterday but it had nothing to do with the hunger strike.
My weight was 230 so I've lost 8 pounds since this started. My first bp reading was 88/77 yes
that's what I said 88/77. I took a few deep breaths before she took it again and it was 132/75
temperature was 97.7 and the pulse was 97. When I'll be checked again, well your guess is as
good as mine! Here I am once again with proof of incompetence. And that's why I'm fighting this
all the way!! Because they incompetently mishandled the DR hearing, the finding of guilty by not
applying Florida law. And then allowing my DR hearing chairman who found me guilty to hear
my grievance appeal. Yes this place exudes incompetence. Overall I feel pretty good. I know I'm
in for the fight of my life. Because I know this administration hates me enough that their hoping
I'll die before someone steps in and corrects the retaliatory injustice that they've dealt out as a
result of my writings. But I don't plan on that happening. Because if I die, I can picture the
satisfaction they'll get. Well God bless you all
Sincerely Ronald W. Clark Jr. #812974
Thursday Oct 7,2021