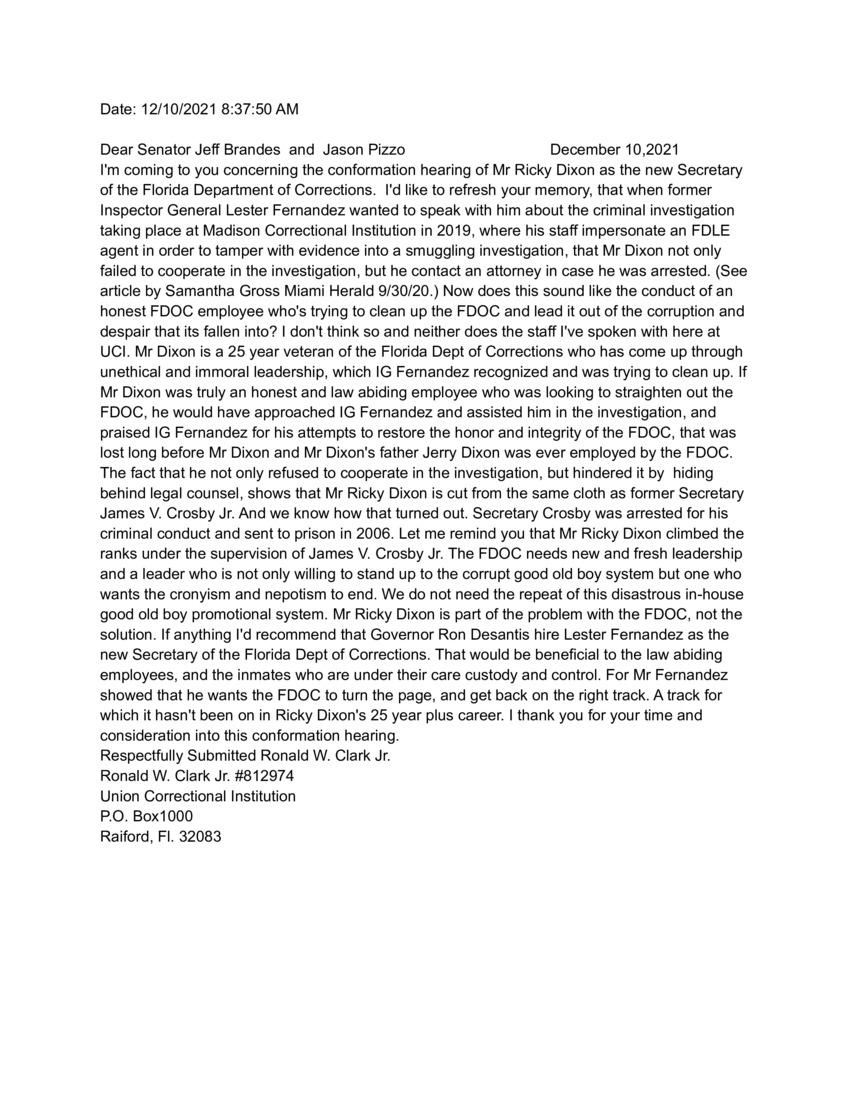 Dear Senator Jeff Brandes and Jason Pizzo
I'm coming to you concerning the conformation hearing of Mr Ricky Dixon as the new Secretary of the Florida Department of Corrections. I'd like to refresh your memory, that when former Inspector General Lester Fernandez wanted to speak with him about the criminal investigation taking place at Madison Correctional Institution in 2019, where his staff impersonate an FDLE agent in order to tamper with evidence into a smuggling investigation, that Mr Dixon not only failed to cooperate in the investigation, but he contact an attorney in case he was arrested. (See article by Samantha Gross Miami Herald 9/30/20). Now does this sound like the conduct of an honest FDOC employee who's trying to clean up the FDOC and lead it out of the corruption and despair that its fallen into? I don't think so and neither does the staff I've spoken with here at UCI. Mr Dixon is a 25 year veteran of the Florida Dept of Corrections who has come up through unethical and immoral leadership, which IG Fernandez recognized and was trying to clean up. If Mr Dixon was truly an honest and law abiding employee who was looking to straighten out the FDOC, he would have approached IG Fernandez and assisted him in the investigation, and praised IG Fernandez for his attempts to restore the honor and integrity of the FDOC, that was lost long before Mr Dixon and Mr Dixon's father Jerry Dixon was ever employed by the FDOC. The fact that he not only refused to cooperate in the investigation, but hindered it by hiding behind legal counsel, shows that Mr Ricky Dixon is cut from the same cloth as former Secretary James V. Crosby Jr. And we know how that turned out. Secretary Crosby was arrested for his criminal conduct and sent to prison in 2006. Let me remind you that Mr Ricky Dixon climbed the ranks under the supervision of James V. Crosby Jr. The FDOC needs new and fresh leadership and a leader who is not only willing to stand up to the corrupt good old boy system but one who wants the cronyism and nepotism to end. We do not need the repeat of the disastrous in-house good old boy promotional system. Mr Ricky Dixon is part of the problem with the FDOC, not the solution. If anything I'd recommend that Governor Ron Desantis hire Lester Fernandez as the new Secretary of the Florida Dept of Corrections. That would be beneficial to the law abiding employees, and the inmates who are under their care custody and control. For Mr Fernandez showed that he wants the FDOC to turn the page, and get back on the right track. A track for which it hasn't been on in Ricky Dixon's 25 year plus career. I thank you for your time and consideration into this conformation hearing.
Respectfully Submitted Ronald W. Clark Jr.
Ronald W. Clark Jr. #812974
Union Correctional Institution
P.O. Box 1000
Raiford, Fl. 32083