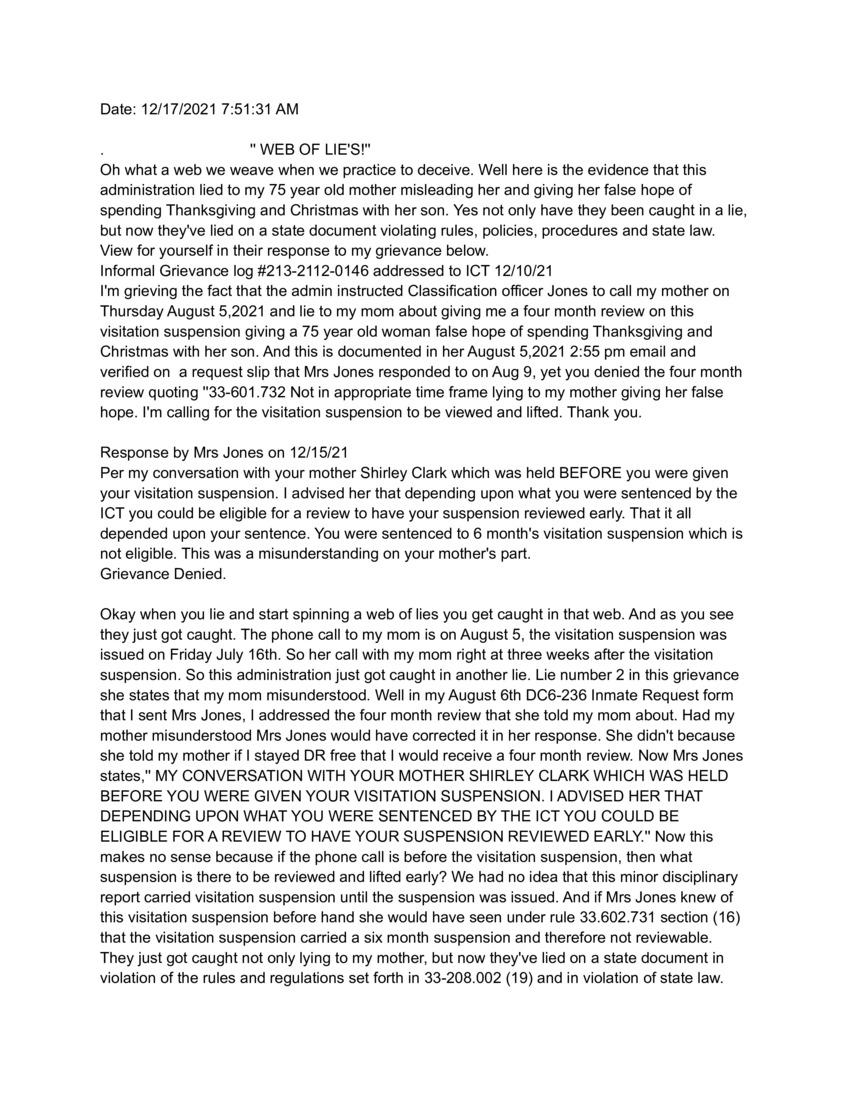 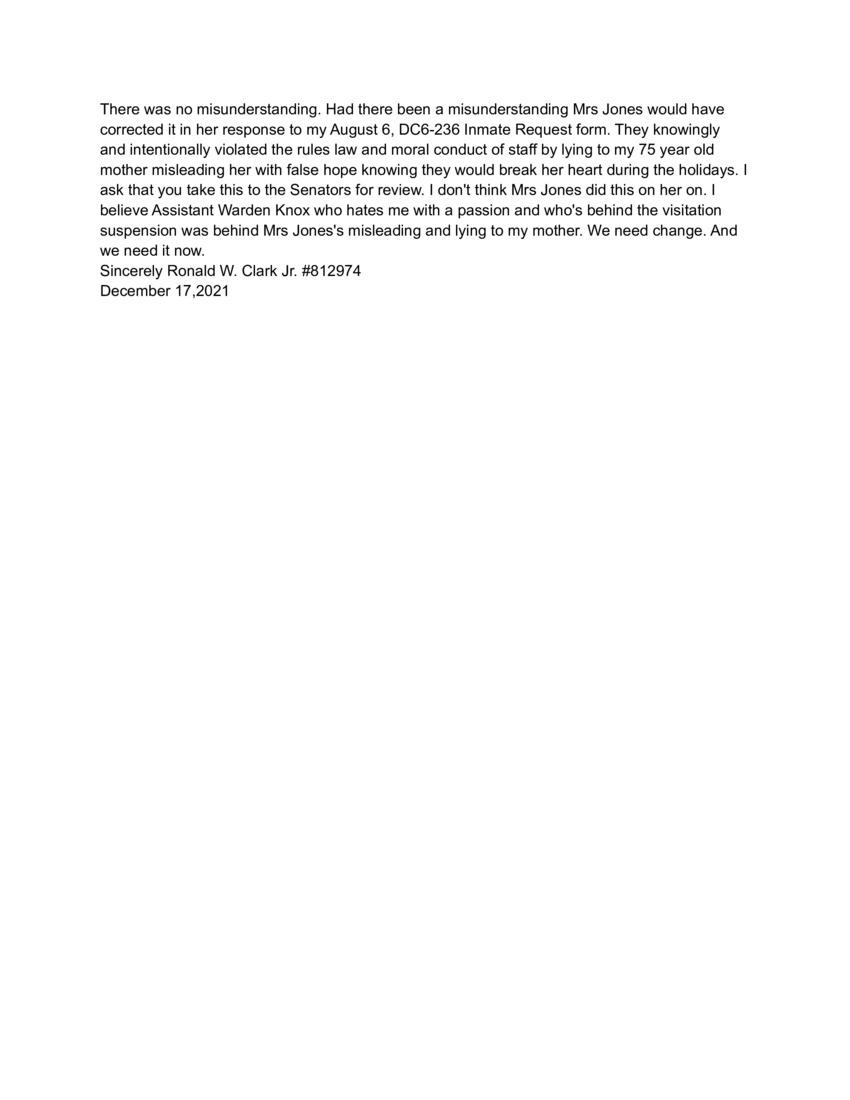 "WEB OF LIE'S!"
On what a web we weave when we practice to deceive. Well here is the evidence that this administration lied to my 75 year old mother misleading her and giving her false hope of spending Thanksgiving and Christmas with her son. Yes not only have they been caught in a lie, but now they've lied on a state document violating rules, policies, procedures and state law.
View for yourself in their response to my grievance below.
Informal Grievance log #213-2112-0146 addressed to ICT 12/10/21
I'm grieving the fact that the admin instructed Classification officer Jones to call my mother on Thursday August 5,2021 and lie to my mom about giving me a four month review on this visitation suspension giving a 75 year old woman false hope of spending Thanksgiving and Christmas with her son. And this is documented in her August 5,2021 2:55 pm email and verified on a request slip that Mrs Jones responded to on Aug 9, yet you denied the four month review quoting "33-601.732 Not in appropriate time frame lying to my mother giving her false hope. I'm calling for the visitation suspension to be viewed and lifted. Thank you.

Response by Mrs Jones on 12/15/21
Per my conversation with your mother Shirley Clark which was held BEFORE you were given your visitation suspension. I advised her that depending upon what you were sentenced by the ICT you could be eligible for a review to have your suspension reviewed early. That it all depended upon your sentence. You were sentenced to 6 month's visitation suspension which is not eligible. This was a misunderstanding on your mother's part.
Grievance Denied.

Okay when you lie and start spinning a web of lies you get caught in that web. And as you see they just got caught. The phone call to my mom is on August 5, the visitation suspension was issued on Friday July 16th. So her call with my mom right at three weeks after the visitation suspension. So this administration just got caught in another lie. Lie number 2 in this grievance she states that my mom misunderstood. Well in my August 6th DC6-236 Inmate Request from that I sent Mrs Jones, I addressed the four month review that she told my mom about. Had my mother misunderstood Mrs Jones would have corrected it in her response. She didn't because she told my other if I stayed DR free that I would receive a four month review. New Mrs Jones states, "MY CONVERSATION WITH YOUR MOTHER SHIRLEY CLARK WHICH WAS HELD BEFORE YOU WERE GIVEN YOUR VISITATION SUSPENSION. I ADVISED HER THAT DEPENDING UPON WHAT YOU WERE SENTENCED BY THE ICT YOU COULD BE ELIGIBLE FOR A REVIEW TO HAVE YOUR SUSPENSION REVIEWED EARLY." Now this makes no sense because if the phone call is before the visitation suspension, then what suspension is there to be reviewed and lifted early? We had no idea that this minor disciplinary report carried visitation suspension until the suspension was issued. And if Mrs Jones knew of this visitation suspension before hand she would have seen under rule 33.602.731 section (16) that the visitation suspension carried a six month suspension and therefore not reviewable. They just got caught not only lying to my mother, but now they've lied on a state document in violation of the rules and regulations set forth 33-208.002 (19) and in violation of state law.

There was no misunderstanding. Had there been a misunderstanding Mrs Jones would have corrected it in her response to my August 6, DC6-236 Inmate Request form. They knowingly and intentionally violated the rules law and moral conduct of staff by lying to my 75 year old mother misleading her with false hope knowing they would break her heart during the holidays. I ask that you take this to Senators for review. I don't think Mrs. Jones did this on her own. I believe Assistant Warden Knox who hates me with a passion and who's behind the visitation suspension was behind Mrs Jones's misleading and lying to my mother. We need change. And we need it now.
Sincerely Ronald W. Clark Jr. #812974
December 17, 2021