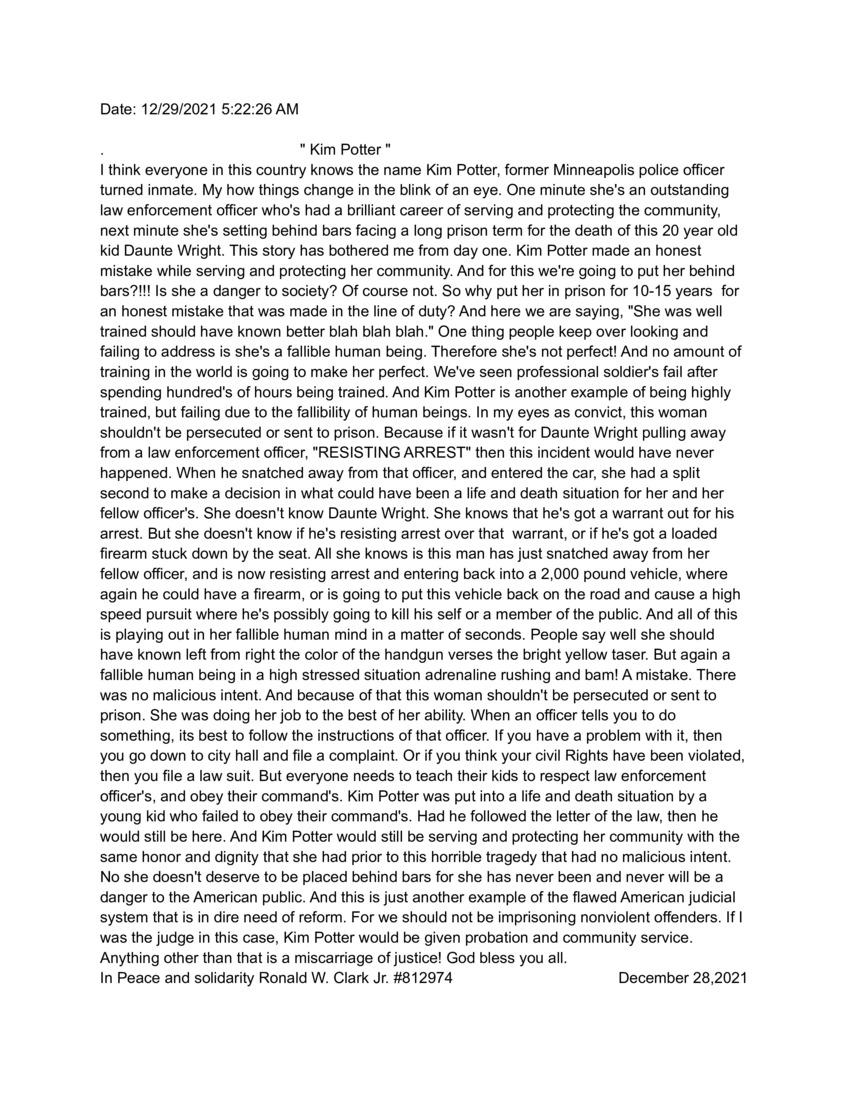 I think everyone in this country knows the name of Kim Potter, former Minneapolis police officer turned inmate. My how things change in the blink of an eye. One minute she's an outstanding law enforcement officer who's had a brilliant career of serving and protecting the community, next minute she's setting behind bars facing a long prison term for the death of this 20 year old kid Duante Wright. This story has bothered me from day one. Kim Potter made an honest mistake while serving and protecting her community. And for this we're going to put her behind bars?!!! Is she a danger to society? Of course not. So why put her in prison for 10-15 years for an honest mistake that was made in the line of duty? And here we are saying, "She was well trained should have known better blah blah blah." One thing people keep over looking and failing to address is she's a fallible human being. Therefore she's not perfect! And no amount of training in the world is going to make her perfect. And we've seen professional solder's fail after spending hundred's of hours being trained. And Kim Potter is another example of being highly trained, but failing due to the fallibility of human beings. In my eyes as a convict, this woman shouldn't be persecuted or sent to prison. Because if it wasn't for Duante Wright pulling away from a law enforcement office, "RESISTING ARREST" then this incident would have never happened. When he snatched away from that officer, and entered the car, she had a split second to make a decision in what could have been a life and death situation for her and her fellow officer's. She doesn't know Duante Wright. She knows that he's got a warrant out for his arrest. But she doesn't know if he's resisting arrest over that warrant, or if he's got a loaded firearm stuck down by the death. All she knows is this man has just snatched away from her fellow officer, and is now resisting arrest and entering back into a 2,000 pound vehicle, where again he could have a firearm, or is going to put this vehicle back on the road and cause a high speed pursuit where he's possibly going to kill his self or a member of the public. And all of this is playing out in her fallible human mind in a matter of seconds. People say well she should have known left from right the color of the handgun verses the bright yellow taser. But again a fallible human being in a high stressed situation adrenaline rushing and bam! A mistake! There was no malicious intent. And because of that this woman shouldn't be persecuted or sent to prison. She was doing her job to the best of her ability. When an officer tells you to do something, its best to follow the instructions of that officer. If you have a problem with it, then you go down to city hall and file a complaint. Or if you think your civil Rights have been violated then you file a law suit. But everyone neds to teach their kids to respect law enforcement officer's, and obey their command's. Kim Potter was put into a life and death situation by a young kid who failed to obey their command's. Had he followed the letter of the law, then he would still be here. And Kim Potter would still be serving and protecting her community with the same homor and dignity that she had prior to this horrible tragedy that had no malicious intent. No she doesn't deserve to be placed behind bars for she has never been and never will be a danger to the American public. And this is just another example of this flawed American judical system that is in dire need of reform. For we should not be imprisoning nonviolent offenders. If I was the judge in this case, Kim Potter would be given probation and community service. Anything other than that is a miscarriage of justice! God bless you all.