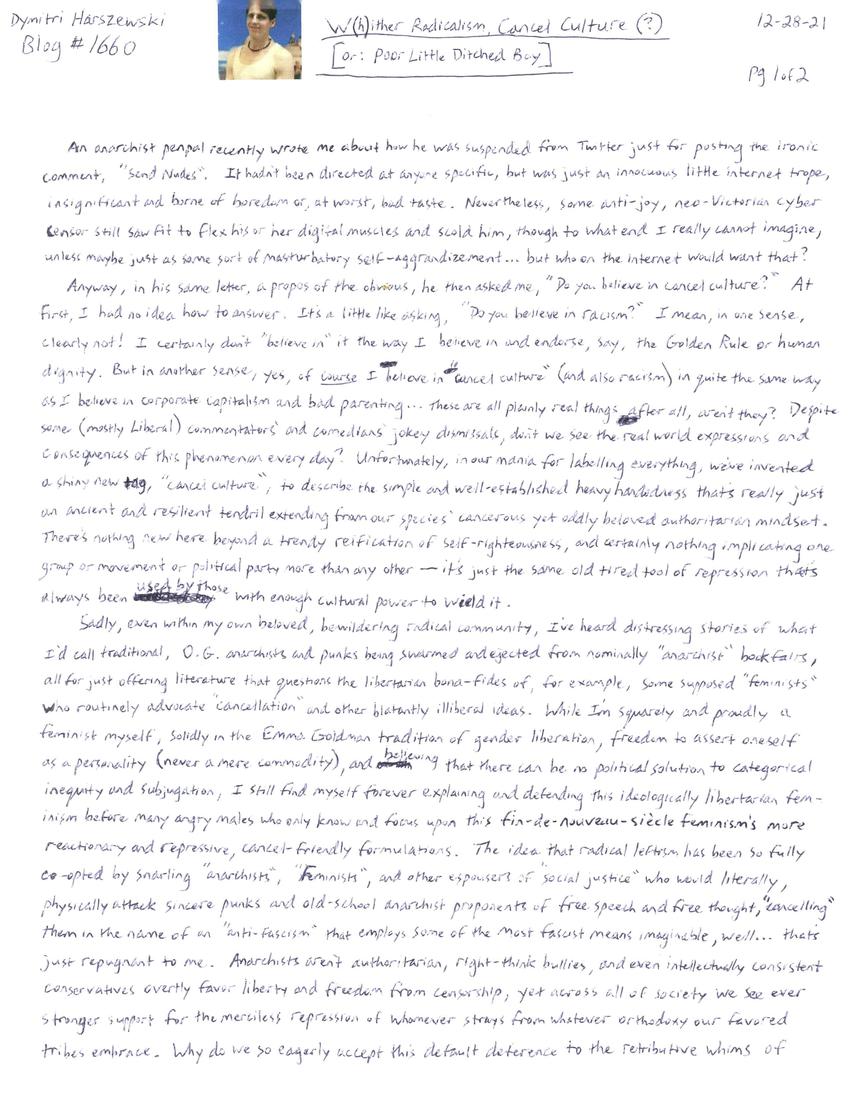 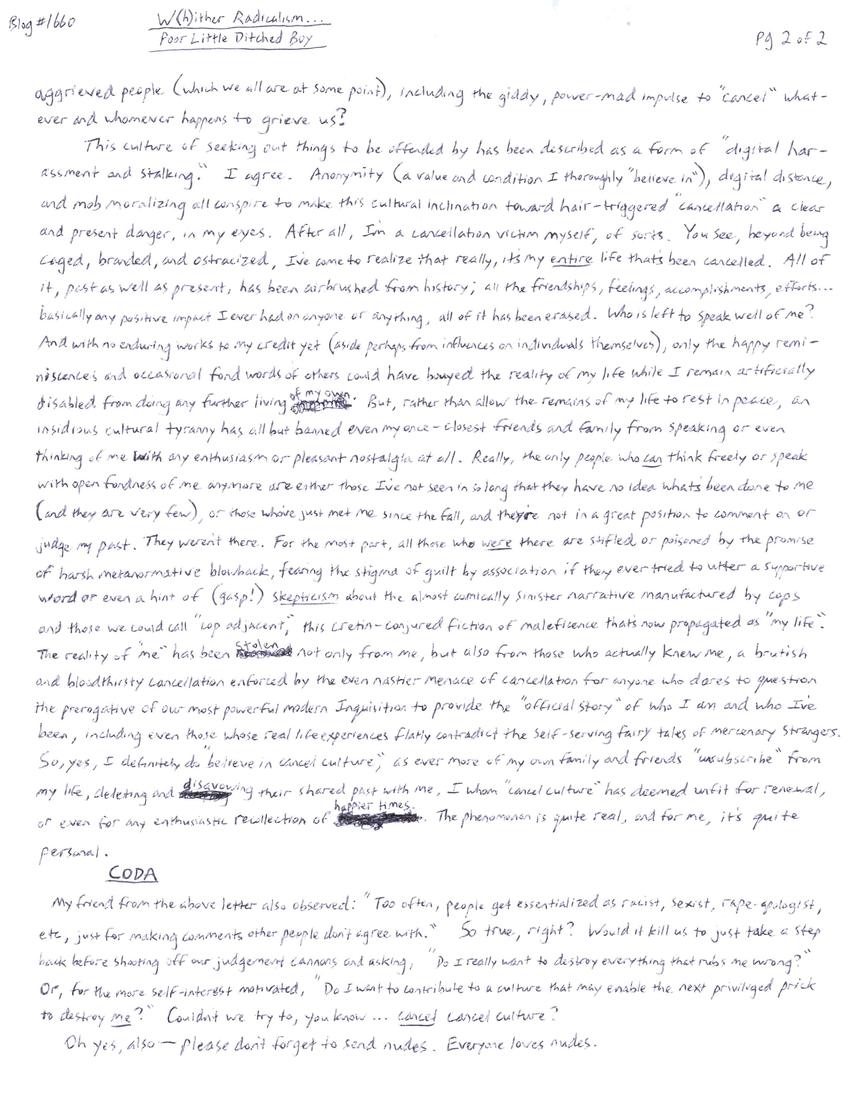 [Photo of the author in a sleeveless white vest and black necklace.]

An anarchist penpal recently wrote me about how he was suspended from Twitter just for posting the ironic comment "send nudes". It hadn't been directed at anyone specific, but was just an innocuous little internet trope, insignificant and borne of boredom or, at worse, bad taste. Nevertheless, some anti-joy, neo Victorian cyber censor still saw fit to flex his or her digital muscles and scold him, though to what end I really cannot imagine, unless maybe just as some sort of masturbatory self-aggrandisement...but who on the internet would want that?

Anyway, in his same letter, apropos of the obvious, he then asked me, "Do you believe in cancel culture?" At first, I had no idea how to answer. It's a little like asking, "Do you believe in racism?" I mean, in one sense, clearly not! I certainly don't "believe in" it the way I believe in and endorse, say, the Golden Rule or human dignity. But in another sense, yes of *course* I believe in "cancel culture" (and also racism) in quite the same way as I believe in corporate capitalism and bad parenting...These are all plainly real things after all, aren't they? Despite some (mostly Liberal) commentators' and comedians' jokey dismissals, don't we see the real world expressions and consequences of this phenomenon every day? Unfortunately, in our mania for labelling everything, we've invented a shiny new tag, "cancel culture", to describe the simple and well-established heavy handedness that's really just an ancient and resilient tendril extending from our species' cancerous yet oddly beloved authoritarian mindset. There's nothing new here beyond a trendy reification of self-righteousness, and certainly nothing implicating one group of movement or political party more than any other - it's just the same old tired tool of repression that's always been used by those with enough cultural power to wield it.

Sadly, even within my own beloved, bewildering radical community, I've heard distressing stories of what I'd call traditional, O.G. anarchists and punks being swarmed and ejected from nominally "anarchist" book fairs all for just offering literature that questions the libertarian bona-fides of, for example, some supposed "feminists" who routinely advocate "cancellation" and other blatantly illiberal ideas. While I'm squarely and proudly a feminist myself, solidly in the Emma Goldman tradition of gender liberation, freedom to assert oneself as a personality (never a mere commodity), and believing that there can be no political solution to categorical inequality and subjugation, I still find myself forever explaining and defending this ideologically libertarian feminism before many angry males who only know and focus upon this fin-de-nouveau-siècle feminisms' more reactionary and repressive, cancel-friendly formulations. The idea that radical leftism has been so fully co-opted by snarling "anarchism", "Feminists", and other espousers of "social justice" who would literally physically attack sincere punks and old-school anarchist proponents of free speech and free thought, "cancelling" them in the name of an "anti-fascism" that employs some of the most fascist means imaginable, well....that's just repugnant to me. Anarchists aren't authoritarian, right-think bullies, and even intellectually consistent conservatives overtly favor liberty and freedom from censorship, yet across all of society we see ever stronger support for the merciless repression of whomever strays from whatever orthodoxy or favored tribes embrace. Why do we so eagerly accept this default deterrence to the retributive whims of aggrieved people (which we are at some point) including the giddy, power-mad impulse to "cancel" whatever and whomever happens to grieve us?

This culture of seeking out things to be offended by has been described as a form of "digital harassment and stalking". I agree. Anonymity (a value and condition I thoroughly "believe in"), degital distance, and mob-moralising all conspire to make this cultural inclination toward hair-triggered "cancellation" a clear and present danger, in my eyes. After all, I'm a cancellation victim myself, of sorts. You see, beyond being caged, branded and ostracized, I've come to realise that really, it's my ENTIRE life that's been cancelled. All of it, past as well as present, has been airbrushed from history; all the friendships, feelings, accomplishments, efforts...basically any positive impact I ever had on anyone or anything, all of it has been erased. Who is left to speak well of me? And with no enduring works to my credit yet (aside perhaps from influences on individuals themselves), only the happy reminiscences and occasional fond words of others could have buoyed the reality of my life while I remain artificially disabled from doing any further living of my own. But, rather than allow the remains of my life to rest in peace, an insidious cultural tyranny has all but banned even my once-closest friends and family from speaking or even thinking of me with any enthusiasm or pleasant nostalgia at all. Really, the only people who CAN think freely or speak with open fondness of me anymore are either those I've not seen in so long that they have no idea what's been done to me (and they are very few), or those who've just met me since the fall, and they're not in a great position to comment on or judge my past. They weren't there. For the most past, all those who WERE there are stifled or poisoned by the promise of harsh metanormative blowback, fearing the stigma or guilt by association if they ever tried to utter a supportive word or even a hint of (gasp!) SKEPTICSM about the almost comically sinister narrative manufactured by copes and those we would call "cop adjacent", this cretin-conjured fiction of maleficence that's now propagated as "my life". The reality of "me" has been stolen not only from me, but also from those who actually knew me, a brutish and bloodthirsty cancellation enforced by the even nastier menace of cancellation for anyone who dares to question the prerogative of our most powerful modern Inquisition to provide the "official story" of who I am and who I've been, including even those whose real life experiences flatly contradict the