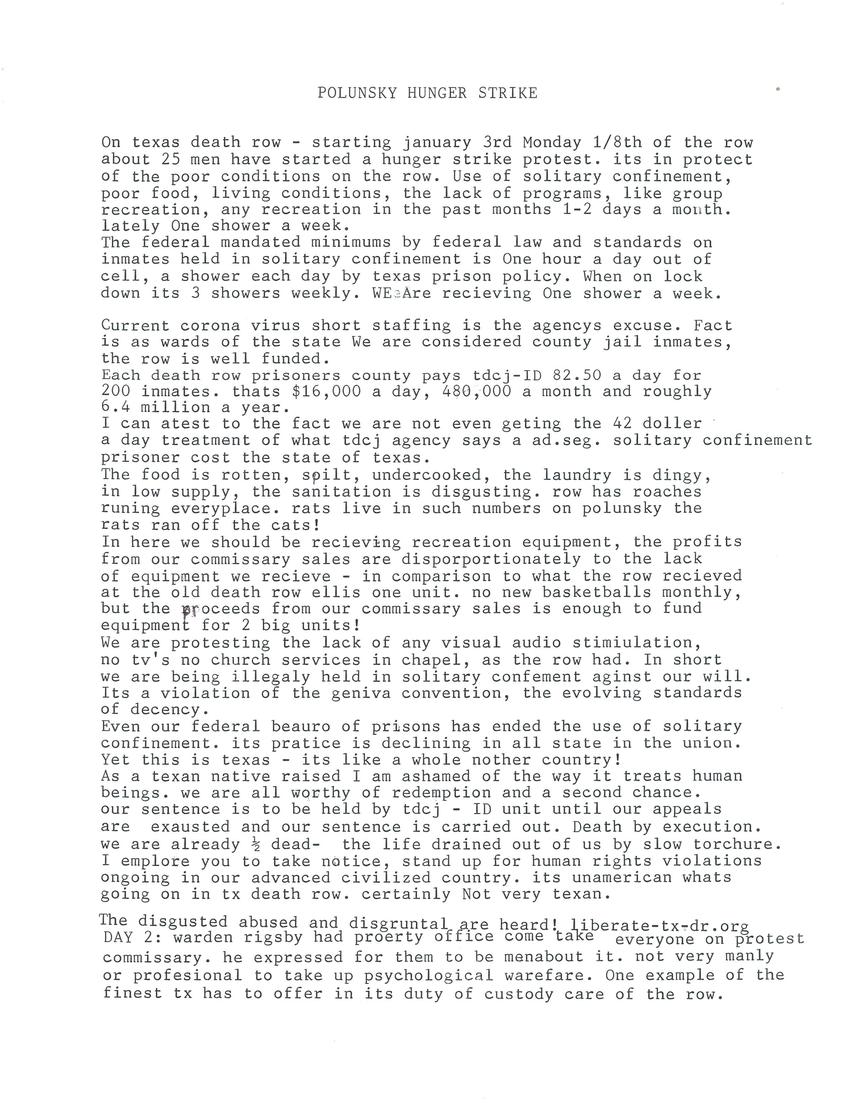 On texas death row - starting january 3rd Monday 1/8th of the row about 25 men have started a hunger strike protest. its in protect of the poor conditions on the row. Use of solitary confinement, poor food, living conditions, the lack of programs, like group recreation, any recreation in the past months 1-2 days a month. lately One shower a week.
The federal mandated minimums by federal law and standards on inmates held in solitary confinement is One hour a day out of cell, a shower each day by texas prison policy. When on lock down its 3 showers weekly. WE Are recieving One shower a week.

Current corona virus short staffing is the agencys excuse. Fact is as wards of the state We are considered county jail inmates, the row is well funded.
Each death row prisoners county pays tdjc-ID 82.50 a day for 200 inmates. thats $16,000 a day, 480,000 a month and roughly 6.4 million a year.
I can atest to the fact we are not even getting the 42 doller a day treatment of what tdcj agency says a ad.seg. solitary confinement prisoner cost the state of texas.
The food is rotten, spoilt, undercooked, the laundry is dingy, in low supply, the sanitation is disgusting. row has roaches runing everyplace. rats live in such numbers on polunsky the rats ran off the cats!
In here we should be receiving recreation equipment, the profits from our commissary sales are disporportionately to the lack of equipment we recieve - in comparison to what the row recieved at the old death row ellis one unit. no new basketballs monthly, but hte proceeds from our commissary sales is enough to fund equipment for 2 big units!
We are protesting the lack of any visual audio stimulation, no tv's no church services in chapel, as the row had. In short we are being illegaly held in solitary confement aginst our will. Its a violation of the geniva convention, the evolving standards of decency.
Even our federal beauro of prisons has ended the use of solitary confinement. its practice is declining in all state in the union. Yet this is texas - its like a whole nother country!
As a texan native raised I am ashamed of the way it treats human beings. we are all worthy of redemption and a second chance. our sentence is to be held by tdcj - ID unit until our appeals are. exausted and our sentence is carried out. Death by execution. we are already 1/2 dead- the life drained out of us by slow torchure. I emplore you to take notice, stand up for human rights violations ongoing in our advanced civilized country. its unamerican whats going on in tx death row. certainly not very texan.

The disgusted abused and disgruntal are heard! liberate-tx-dr.org
DAY 2: warden rigsby had proerty office come take everyone on protest commissary. he expressed for them to be menabout it. not very manly or profesional to take up psychological warefare. One example of the finest tx has to offer in its duty of custody care of the row.