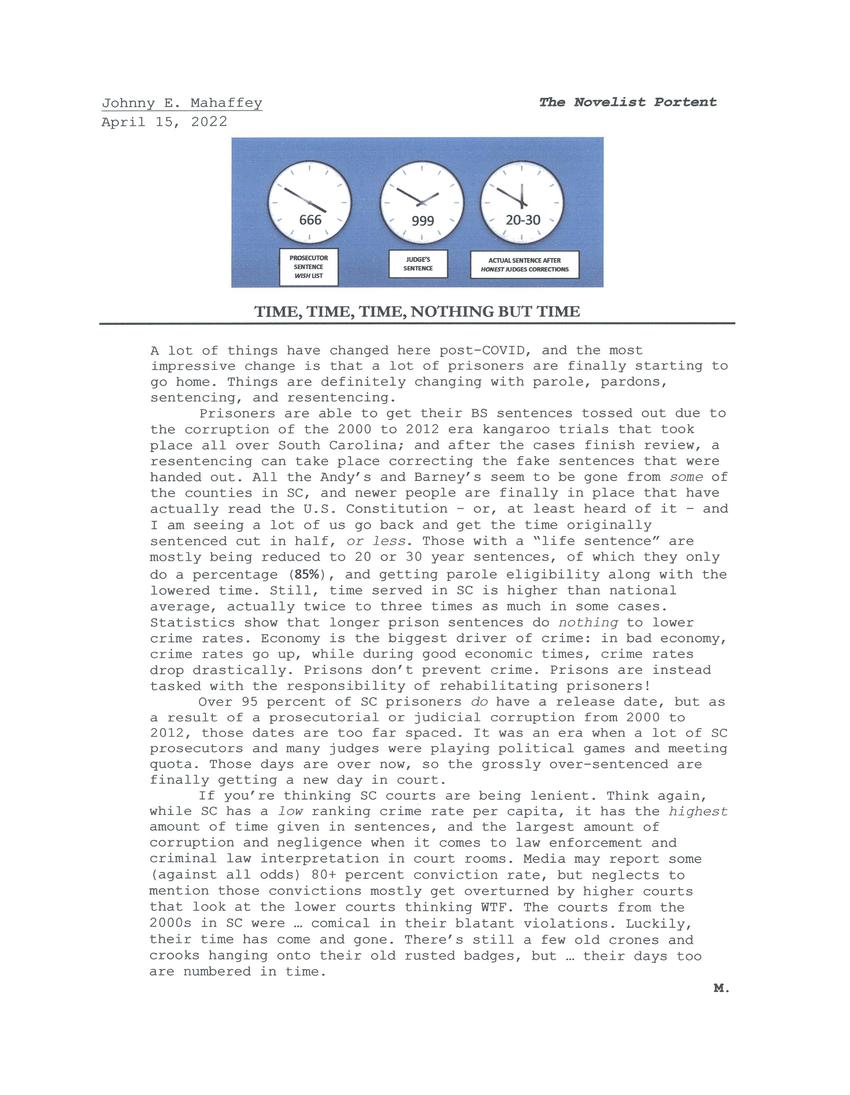 A lot of things have changed here post-COVID, and the most impressive change is that a lot of prisoners are finally starting to go home. Things are definitely changing with parole, pardons, sentencing, and resentencing.
Prisoners are able to get their BS sentences tossed out due to the corruption of the 2000 to 2012 era kangaroo trials that took place all over South Carolina; and after the cases finish review, a resentencing can take place correcting the fake sentences that were handed out. All the Andy's and Barney's seem to be gone from some of the counties in sc, and newer people are finally in place that have actually read the U.S. Constitution or, at least heard of it - and I am seeing a lot of us go back and get time originally sentenced cut in half, or less. Those with a "life sentence" are mostly being reduced to 20 or 30 year sentences, of which they only do a percentage (85%), and getting parole eligibility along with the lowered time. Still, time served in SC is higher than national average, actually twice to three times as much in some cases. Statistics show that longer prison sentences do nothing to lower crime rates. Economy is the biggest driver of crime: in bad economy,
crime rates go up, while during good economic times, crime rates drop drastically. Prisons don't prevent crime. Prisons are instead tasked with the responsibility of
rehabilitating prisoners!
Over 95 percent of SC prisoners do have a release date, but as a result of a prosecutorial or judicial corruption from 2000 to 2012, those dates are too far spaced.
It was an era when a lot of SC prosecutors and many judges were playing political games and meeting quota. Those days are over now, so the grossly over-sentences are finally getting a new day in court.
If you're thinking SC courts are being lenient. Think again, while SC has a low ranking crime rate per capita, it has the highest amount of time given in sentences, and the largest amount of corruption an negligence when it comes to law enforcement and criminal law interpretation in court rooms. Media may report some (against all odds) 80+ percent conviction rate, but neglects to mention those convictions mostly get overturned by higher courts that look at the lower courts thinking WTF. The courts from the 2000s in SC were ... comical in their blatant violations. Luckily, their time has come and gone. There's still a few old crones and crooks hanging onto their old rusted badges, but ... their days too are numbered in time.
M.

All of this aside, you were found guilty because you are guilty. You killed Ryan. You had a list of targets. You said you did it out loud to multiple people. You murdered a man.
If I remember correctly, when someone leaves a negative comment, you never see it. A good idea to have someone filter your received comments and to ignore all the negative Nancies out here John. What's the saying in America? If people aren't talking about you, then you aren't doing anything right.

Negative Nancies hate being ignored, it's hilarious, because they seek affirmation. And for you to never even see what negativity they write, is very positive. Their jealousy eats at their soul, and hate controls them. It is not until they find God and learn forgiveness that they can find self peace. Even if not religious, they are lost souls knowing nothing but blame and hate, stuck in the past.

Some of them so jealous of you that they even started a rumor that you were dead. 😆

kudos to you for surviving and being alive. Keep at it, with your elegant and brilliant writing, your beautiful art, your teaching to help prisoners less fortunate, and all the great things you continue to do to make the world a better place. The hundreds of prisoners that now have a GED because of your help, will have better chances in society, and less chance of commitment of on other crime.

I believe in forgiveness and second chances, and my heart is light weighted and full of love and life. Right now, I smile, and I am happy. This is the way.
It’s good to see a recent writing from you. When I heard you kicked it I was very distraught and when I found out it was all vicious lies I was very happy. We’ve had our differences and over the years we’ve found common ground and respect for each other. Please continue to write continue to spread good wherever you can.
Thanks for writing! I finished the transcription for your post.
https://www.google.com/amp/s/www.propublica.org/article/what-happens-when-judges-police-themselves-in-secret-not-much/amp

Ran across this article. It doesn't seem to be pasting correct as a link, you will have to copy it. 😲 Judges in South Carolina are seriously corrupted! I remember you saying how prisoners in SC now have tablets and can buy access to apps through the prison's new Wifi system, hopefully you can access this article. It shocked me to read this.

Everything you have been saying about corruption in South Carolina, especially a decade or two ago, is right. Those judges were horrible people.