Why do we refuse to see? 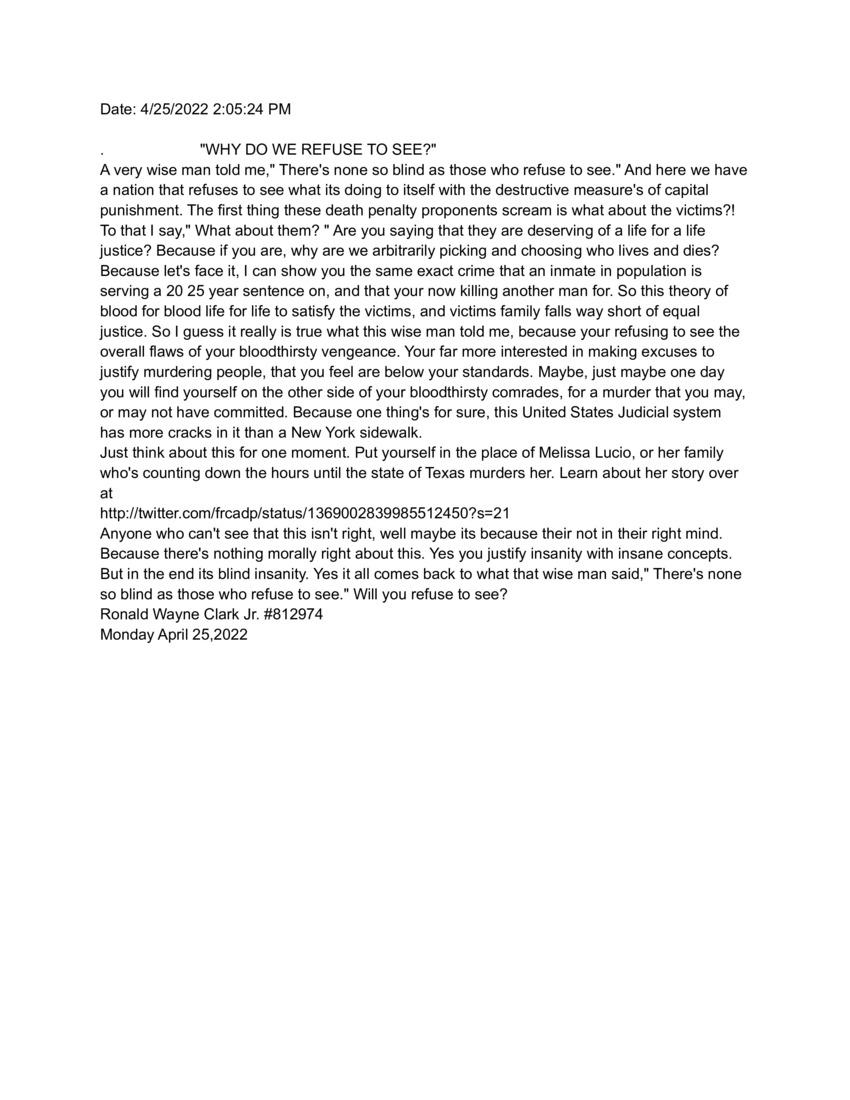 Date: 4/25/2022 2:05:24 PM
"WHY DO WE REFUSE TO SEE?"
Avery wise man told me," There's none so blind as those who refuse to see." And here we have
a nation that refuses to see what its doing to itself with the destructive measure's of capital
punishment. The first thing these death penalty proponents scream is what abouthe victims?!
To that I say," What about them? " Are you saying that they are deserving of a life for a life
justice? Because if you are, why are we arbitrarily picking and choosing who lives and dies?
Because let's face it, I can show you the same exact crime that an inmate in population is
serving a 20 25 year sentence on, and that your now killing another man for. So this theory of
blood for blood life for life to satisfy the victims, and victims family falls way short of equal
justice. So I guess it really is true what this wise man told me, because your refusing to see the
overall flaws of your bloodthirsty vengeance. Your far more interested in making excuses to
justify murdering people, that you feel are below your standards. Maybe, just maybe one day
you will find yourself on the other side of your bloodthirsty comrades, for a murder that you may,
or may not have committed. Because one thing's for sure, this United States Judicial system
has more cracks in it than a New York sidewalk.
Just think about this for one moment. Put yourself in the place of Melissa Lucio, or her family
who's counting down the hours until the state of Texas murders her. Learn about her story over at
http://twitter.com/frcadp/status/1369002839985512450?s=21
Anyone who can't see that this isn't right, well maybe its because their not in their right mind.
Because there's nothing morally right about this. Yes you justify insanity with insane concepts.
But in the end its blind insanity. Yes it all comes back to what that wise man said," There's none
so blid as those who refuse to see." Will you refuse to see?
Ronald Wayne Clark Jr. #812974
Monday April 25, 2022