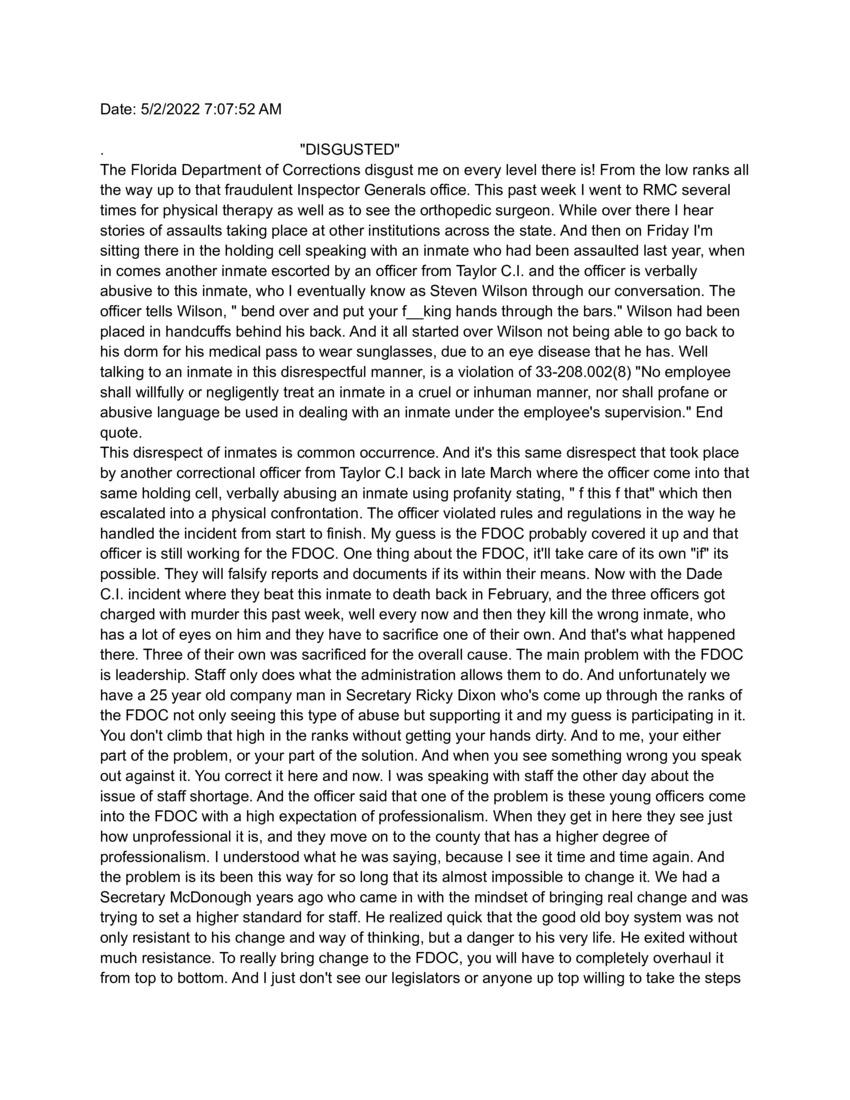 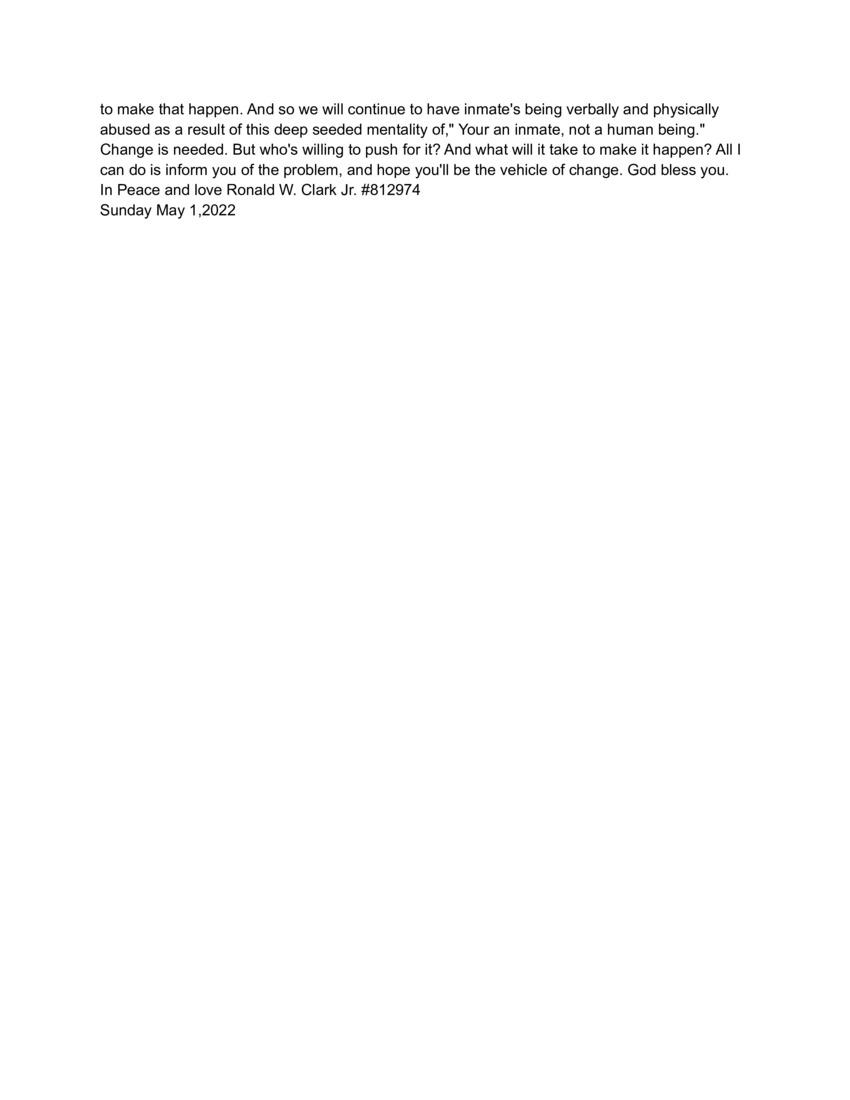 Date: 5/2/2022 7:07:52 AM
"DISGUSTED"
The Florida Department of Corrections disgust me on every level there is! From the low ranks all the way up to that fraudulent Inspector Generals office. This past week I went to RMC several times for physical therapy as well as to see the orthopedic surgeon. While over there I hear stories of assaults taking place at other institutions across the state. And then on Friday I'm sitting there in the holding cell speaking with an inmate who had been assaulted last year, when in comes another inmate escorted by an officer from Taylor C.I. and the officer is verbally abusive to this inmate, who I eventually know as Steven Wilson through our conversation. The officer tells Wilson, "bend over and put your f__king hands through the bars." Wilson had been placed in handcuffs behind his back. And it all started over Wilson not being able to go back to his dorm for his medical pass to wear sunglasses, due to an eye disease that he has. Well talking to an inmate in this disrespectful manner, is a violation of 33-208.002(8) "No employee shall willfully or negligently treat an inmate in a cruel or inhuman manner, nor shall profane or abusive language be used in dealing with an inmate under the employee's supervision" End quote.
This disrespect of inmates is common occurrence. And it's this same disrespect that took place by another correctional officer from Taylor C.I back in late March where the officer come into the same holding cell, verbally abusing an inmate using profanity stating, "f this f that" which then escalated into a physical confrontation. The officer violated rules and regulations in the way he handled the incident from start to finish. My guess is the FDOC probably covered it up and that officer still working for FDOC. One thing about the FDOC, it'll take care of its own "if" its possible. They will falsify reports and documents if its within their means. Now with the Dade C.I. incident where they beat this inmate to death back in February, and the three officers got charged with murder this past week, well every now and then they kill the wrong inmate, who has a lot of eyes on him and they have to sacrifice one of their own. And that's what happened there. Three of their own was sacrificed for the overall cause. The main problem with the FDOC is leadership. Staff only does what the administration allows them to do. And unfortunately we have a 25 year old company man in Secretary Ricky Dixon who's come up through the ranks of FDOC not only seeing this type of abuse but supporting it and my guess is participating in it. You don't climb that high in the ranks without getting your hands dirty. And to me, your either part of the problem, or your part of the solution. And when you see something wrong you speak out against it. You correct it here and now. I was speaking with staff the other day about the issue of staff shortage. And the officer said that one of the problem is these young officers come into the FDOC with a high expectation of professionalism. When they get in here they see just how unprofessional it is, and they move on to the county that has a higher degree of professionalism. I understood what he was saying, because I see it time and time again. And the problem is its been this way for so long that its almost impossible to change it. We had a Secretary McDonough years ago who came in with the mindset of bringing real change and was trying to set a higher standard for staff. He realized quick that the good old boy system was not only resistant to his change and way of thinking, but a danger to his very life. He exited without much resistance. To really bring change to the FDOC, you will have to completely overhaul it from top to bottom. And I just don't see our legislators or anyone up top willing to take the steps to make that happen. And so we will continue to have inmate's being verbally and physically abused as a result of this deep seeded mentality of, "Your an inmate, not a human being." Change is needed. But who's willing to push for it? And what will it take to make it happen? All I can do is inform you of the problem, and hope you'll be the vehicle of change. God bless you. In Peace and love Ronald W. Clark Jr. #812974
Sunday May 1,2022