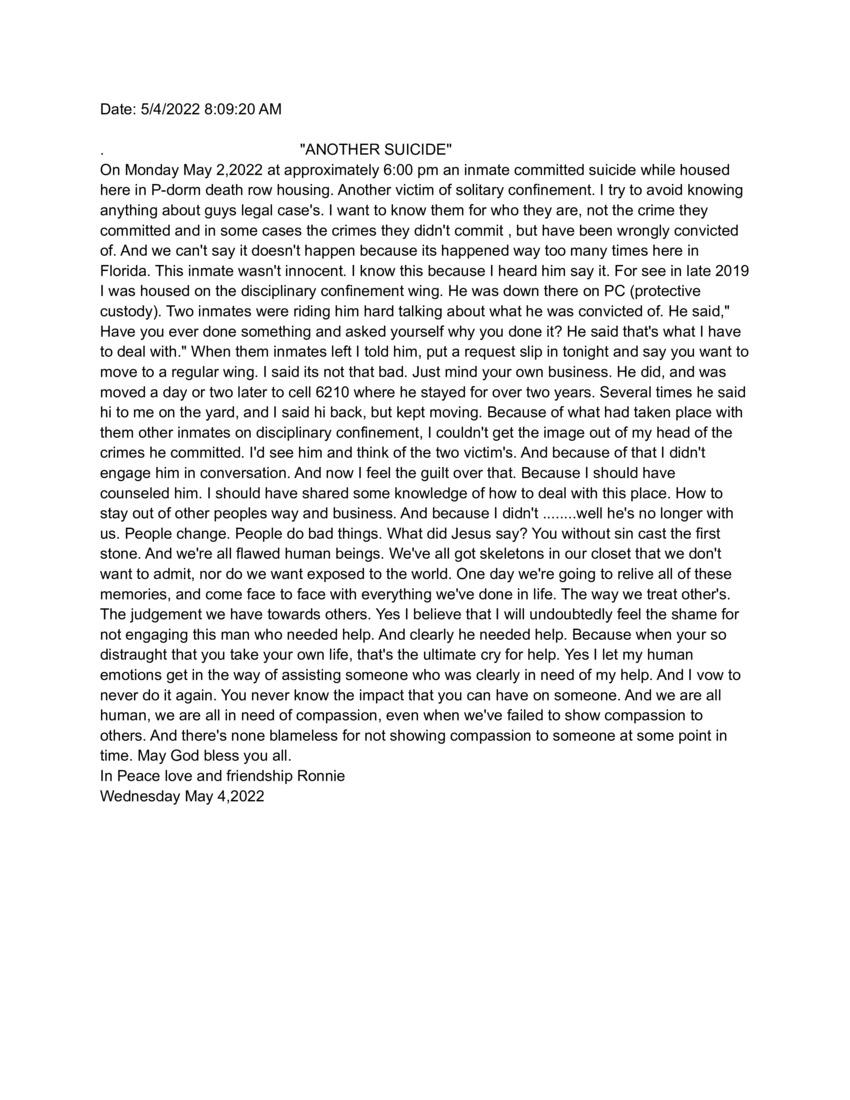 "ANOTHER SUICIDE"
On Monday May 2,2022 at approximately 6:00 pm an inmate committed suicide while housed
here in P-dorm death row housing. Another victim of solitary confinement. I try to avoid knowing
anything about guys legal case's.I want to know them for who they are, not the crime they
committed and in some cases the crimes they didn't commit, but have been wrongly convicted
of. And we can't say it doesn't happen because its happened way too many times here in
Florida. This inmate wasn't innocent. I know this because I heard him say it.For see in late 2019
I was housed on the disciplinary confinement wing. He was down there on PC(protective
custody). Two inmates were riding him hard talking about what he was convicted of. He said, "
Have you ever done something and asked yourself why you done it? He said that's what I have
to deal with." When them inmates left I told him, put a request slip in tonight and say you want to
move to a regular wing. I said its not that bad. Just mind your own business. He did, and was
moved a day or two later to cell 6210 where he stayed for over two years.Several times he said
hi to me on the yard, and I said hi back, but kept moving. Because of what had taken place with
them other inmates on disciplinary confinement, I couldn't get the image out of my head of the
crimes he committed. I'd see him and think of the two victim's.And because of that I didn't
engage him in conversation. And now I feel the guilt over that.Because I should have
counseled him.I should have shared some knowledge of how to deal with this place.How to
stay out of other peoples way and business.And because I didn't .... well he's no longer with
us.People change.People do bad things.What did Jesus say? You without sin cast the first
stone.And we're all flawed human beings. We've all got skeletons in our closet that we don't
want to admit, nor do we want exposed to the world. One day we're going to relive all of these
memories, and come face to face with everything we've done in life. The way we treat other's.
The judgement we have towards others. Yes I believe that I will undoubtedly feel the shame for
not engaging this man who needed help. And clearly he needed help.Because when your so
distraught that you take your own life, that's the ultimate cry for help. Yes I let my human
emotions get in the way of assisting someone who was clearly in need of my help.And I vow to
human,we are all in need of compassion, even when we've failed to show compassion to
others.And there's none blameless for not showing compassion to someone at some point in
time. May God bless you all.
In Peace love and Friendship Ronnie
Wednesday May 4,2022