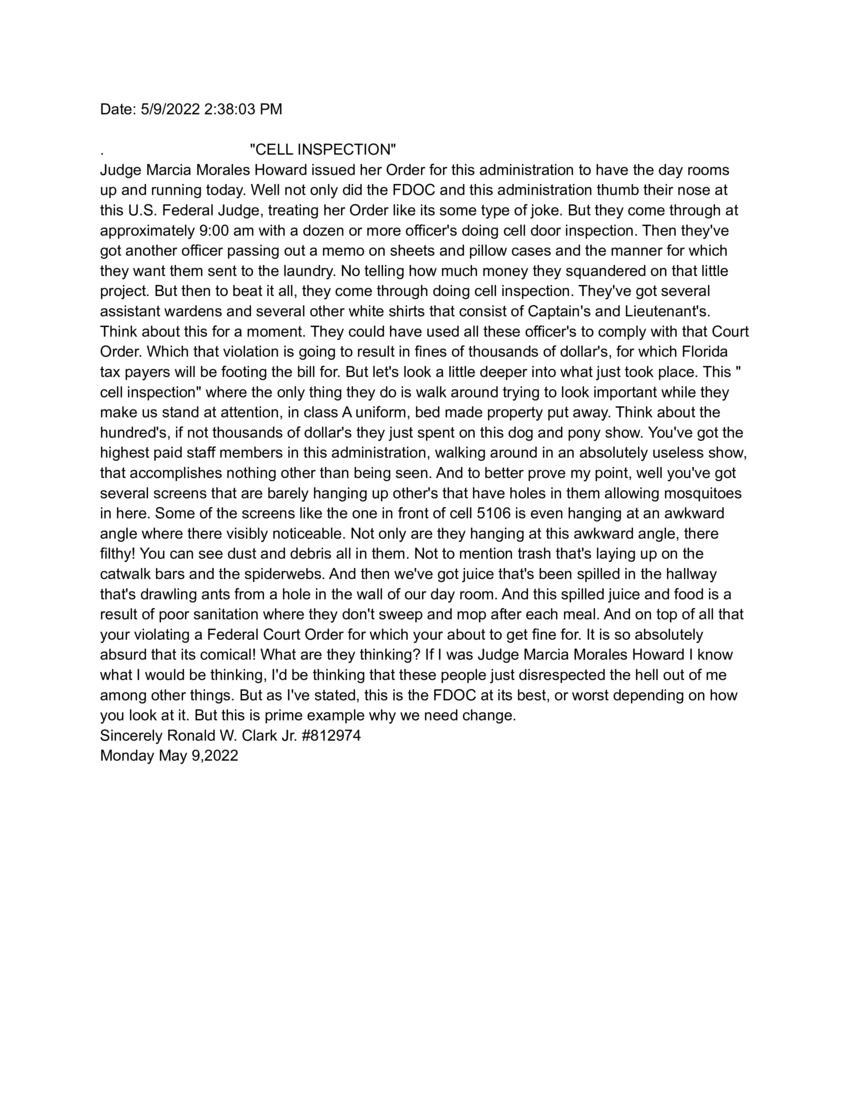 Judge Marcia Morales Howard issued her Order for this administration to have the day rooms up and running today. Well, not only did the FDOC and this administration thumb their noses at the U.S. Federal judge, treating her order like it is some type of joke, but they also come through at approximately 9;00 AM with a dozen or more officers doing cell door inspection. Then they have another officer passing out a memo on sheets and pillow cases and they manner in which they want them sent to the laundry. No telling how much money they squandered on that little project. But then, to beat it all, they come through doing cell inspections.
They've got several assistant wardens and other white shirts that consists of Captains and Lieutenants. Think about that for a moment. They could have used all these officers to comply with that Court Order. That violation is going to result in fines of thousands of dollars for which the Florida tax players will foot the bill for. But let's take a deeper look in to what just took place. This "cell inspection", where the only thing they do is to walk around trying to look important while they make us stand at attention, in class A uniform, bed made property put away. Think about the hundreds if not thousands of dollars they spent on this dog and pony show. You've got the highest paid staff members in this administration walking around in an absolutely useless show that accomplished nothing other than being seen.
And to prove better prove my point, well, you've got several screens that are barely hanging up. Others have holes in them allowing mosquitoes in here. Some of the screens in front of cell 5106 is even hanging at an awkward angle where they are visibly noticeable. Not only are they hanging at this awkward angle, they are filthy! You can see dust and debris in all of them. Not to mention trash that's been laying up catwalk bars and the spiderwebs. And then we've got juice that been spilled in the hallway thats drawing ants from a home in the wall of our day room. And this spilled juice and food is a result of poor sanitation where they don't sweep and mop after each meal. And on top of all that you are violating a Federal Court Order for which you are about to get fined for. It is so absolutely absurd that it is comical! What are they thinking?
If I was Judge Marcia Morales Howard, I know what I would be thinking. I'd be thinking that these people just disrespected the hell out of me among other things. But as I've stated, this is FDOC at it's best , or worst depending on how you look at it. But this is a prime example of why we need change.