Moving in the Wrong Direction 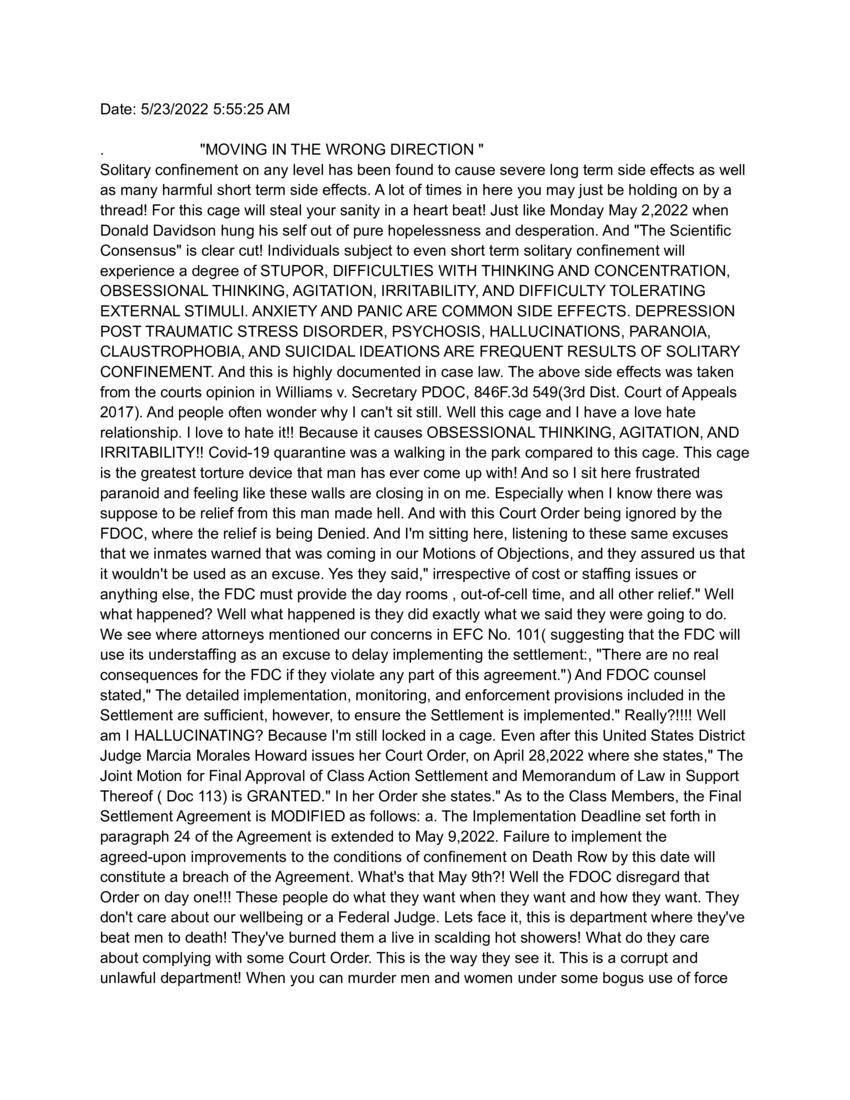 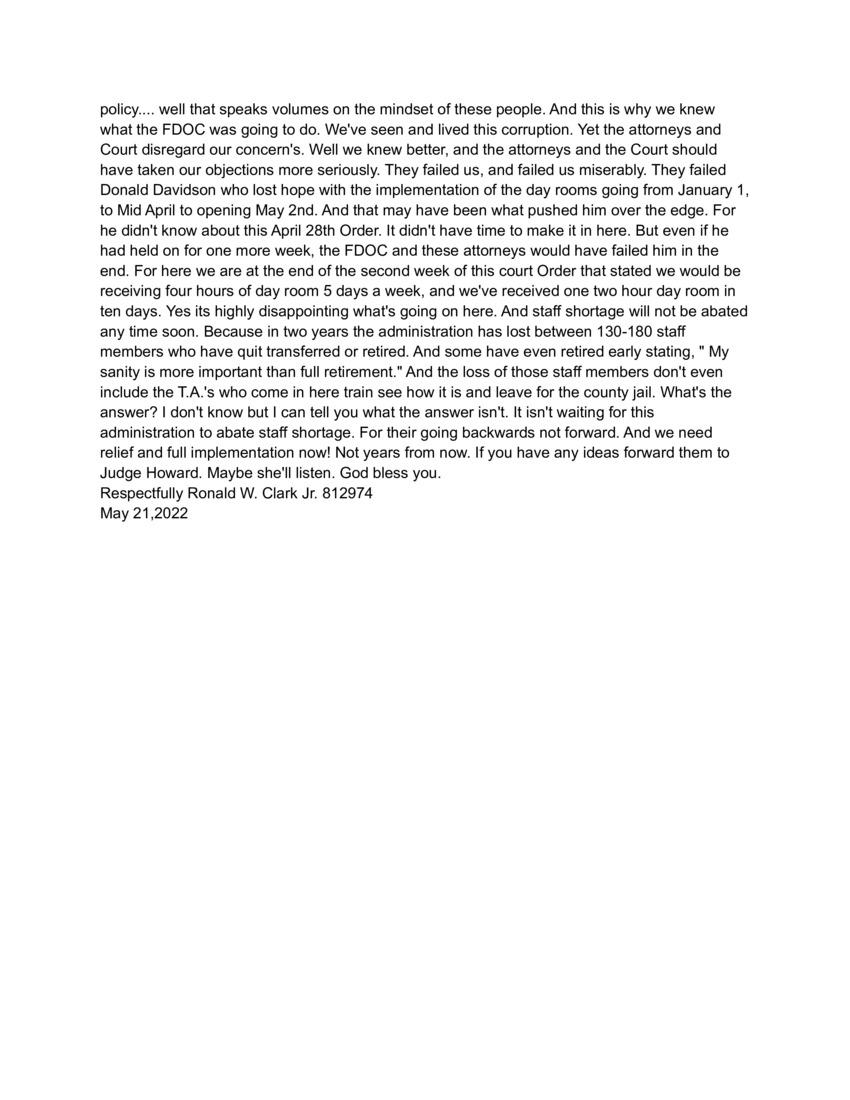 "MOVING IN THE WRONG DIRECTION"
Solitary confinement on any level has been found to cause severe long term effects as well as many harmful short term side effects. A lot of times in here you may just be holding on by a thread. For this cage will steal your sanity in a heart beat! Just like Monday May 2, 2022 when Donald Davidson hung himself out of pure hopelessness and desperation. And "The Scientific Consensus" is clear cut! Individuals subject to even short term solidarity confinement will experience a degree of STUPOR, DIFFICULTIES WITH THINKING AND CONCENTRATION, OBSESSIONAL THINKING, AGITATION, IRRITABILITY, AND DIFFICULTY TOLERATING EXTERNAL STIMULI. ANXIETY AND PANIC ARE COMMON SIDE EFFECTS. DEPRESSION POST TRAUMATIC STRESS DISORDER, PSYCHOSIS, HALLUCINATIONS, PARANOIA, CLAUSTROPHOBIA, AND SUICIDAL IDEATIONS ARE FREQUENT RESULTS OF SOLITARY CONFINEMENT. And this is highly documented in case law. The above side effects was taken from the courts opinion in Williams v. Secretary PDOC, 846F.3d 549 (3rd Dist. Court of Appeals 2017). And people often wonder why I can't sit still. Well this cage and I have a love hate relationship. I love to hate it!! Because it was OBSESSIONAL THINKING, AGITATION, AND IRRITABILITY!! Covid-19 quarantine was a walking in the park compared to this cage. This cage is the greatest torture device that man has ever come up with! And so I sit here frustrated paranoid and feeling like these walls are closing in on me. Especially when I know there was suppose to be relief from this man made hell. And with this Court Order being ignored by the FDOC, where the relief is being Denied. And I'm sitting here, listening to these same excuses that we inmates warned that was coming in our Motions of Objections, and they assured us that it wouldn't be used as an excuse. Yes they said "irrespective of cost or staffing issues or anything else, the FDC must provide the day rooms, out-of-cell time, and all other relief." Well what happened? Well what happened is they did exactly what we said they were going to do. We see the attorneys mentioned in our concerns in EFC No. 101 (suggesting that the FDC will use its understaffing as an excuse to delay implementing the settlement:, "There are no real consequences for the FDC if they violate any part of this agreement.") And FDOC counsel stated, "The detailed implementation, monitoring, and enforcement provisions included in the Settlement are sufficient, however, to ensure the Settlement is implemented." Really?!!!! Well am I HALLUCINATING? Because I'm still locked in a cage. Even after this United States District Judge Marcia Morales Howard issues her Court Order, on April 28, 2022 where she states, "The Joint Motion for Final Approval of Class Action Settlement and Memorandum of Law in Support Thereof ( DOC 113) is GRANTED." In her Order she states, "As to the Class Members, the Final Settlement Agreement is MODIFIED as follows: a. The Implementation Deadline set forth in paragraph 24 of the Agreement is extended to May 9, 2022. Failure to implement the agreed-upon improvements to the conditions of confinement on Death Row by this date will constitute a breach of the Agreement. What's that May 9th?! Well the FDOC disregard that Order on day one!!! These people do what they want when they want and how they want. They don't care about our wellbeing or a Federal Judge. Lets face it, this deparment where they've beat men to death! They've burned them alive in scalding hot showers! What do they care about complying with some Court Order. This is the way they see it. This is a corrupt and unlawful department! When you can murder men and women under some bogus use of force

--Page 2--
policy... well that speaks volumes on the mindset of these people. And this is why we knew what the FDOC was going to do. We've seen and lived this corruption. Yet the attorneys and Court disregard our concern's. Well we knew better, and the attorneys and the Court should have taken our objections more seriously. They failed us, and failed us miserably. They failed Donald Favidson who lost hope with the implementation of the day rooms going from January 1, to Mid April to opening May 2nd. And that may have been what pushed him over the edge. For he didn't know about this April 28th Order. It didn't have time to make it in here. But even if he had held on for one more week, the FDOC and these attorneys would have failed him in the end. For here we are at the end of the second week of this court Order that stated we would be receiving four hours of day room 5 days a week, and we've received one two hour day room in ten days. Yes its highly disappointing what's going on here. And staff shortage will not be abated any time soon. Because in two years the administration has lost between 130-180 staff members who have quit transfered or retired. And some have even retired early stating, "My sanity is more important than full retirement." And the loss of those staff members don't even include the T.A.'s who come in here train see how it is and leave for the county jail. What's the answer? I don't know but I can tell you what the answer isn't. It isn't waiting for this administration to abate staff shortage. For their going backwards not forward. And we need relief and full implementation now! Not years from now. If you have any ideas forward them to Judge Howard. Maybe she'll listen. God bless you.
Respectfully Ronald W. Clark Jr. 812974
May 21, 2022