The Illiteracy Problem in the United States 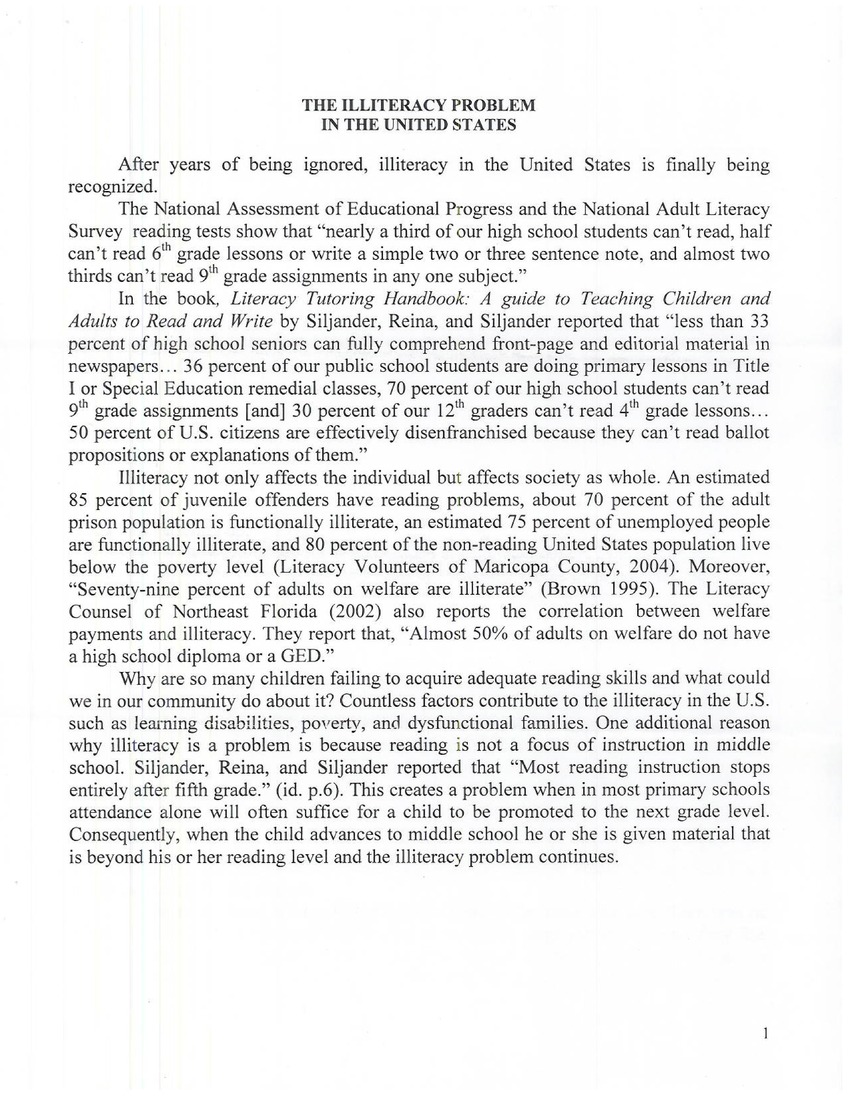 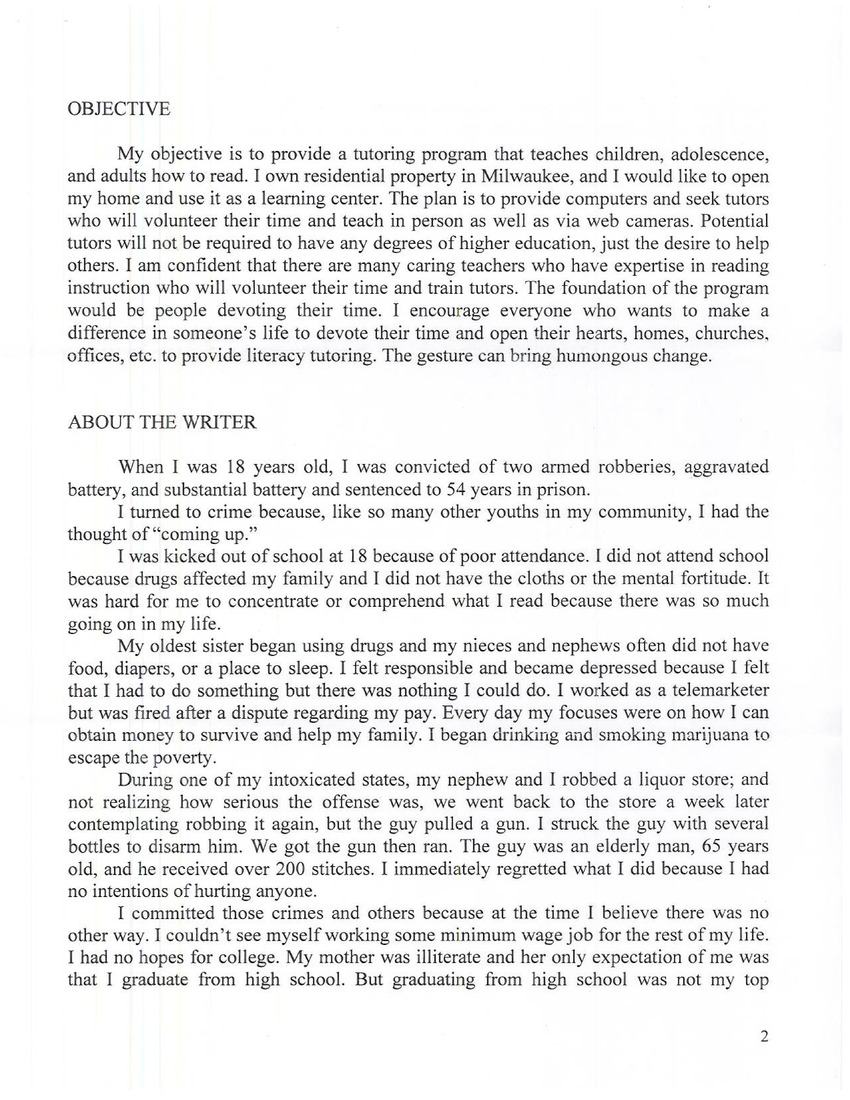 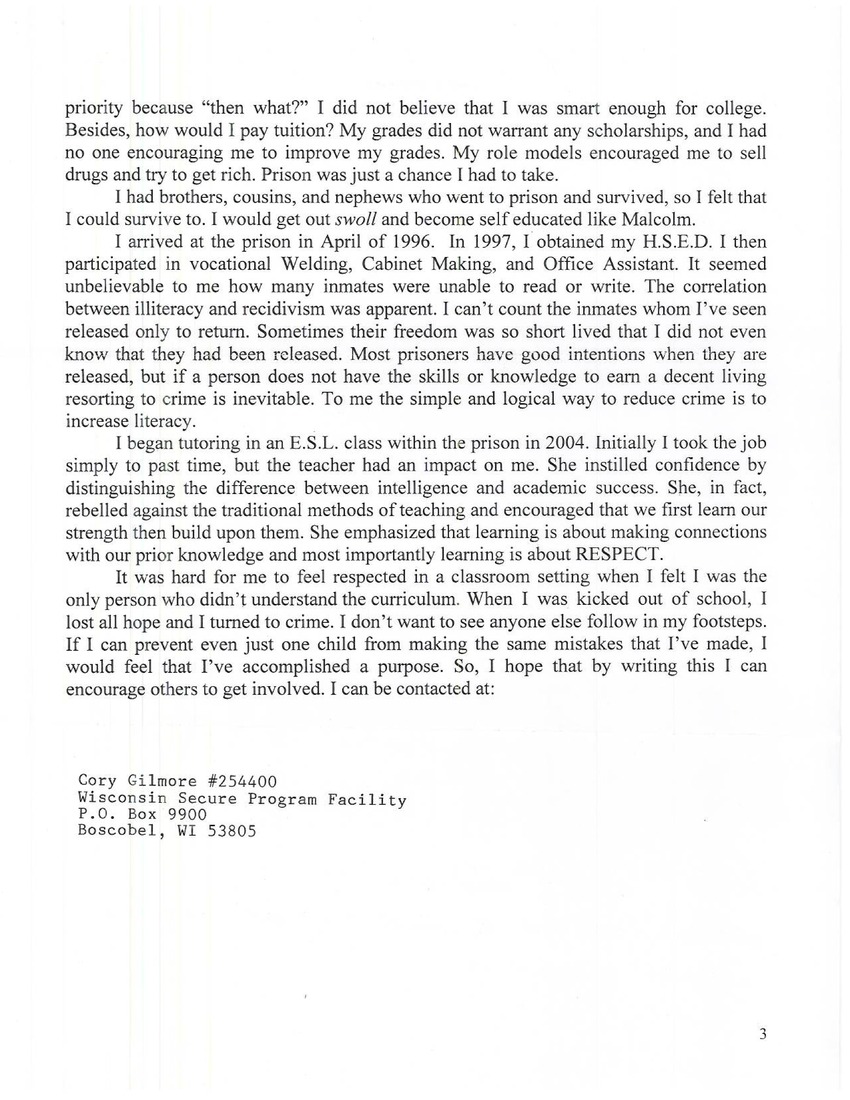 The Illiteracy Problem
In The United States

After years of being ignored, illiteracy in the United States is finally being recognized.
The Nationanl Assessment of Educational Progress and the National Adult Literacy Surver reading tests show that nearly a third of our high school students can't read, half can't read 6th grade lessons or write a simple two or three sentence note, and almost two thirds can't read 9th grade assignments in any one subject.
In the book, Literacy Tutoring Handbook: A guide to teaching children and adults to read and write by Siljander, Reina, and Siljander reported that "less than 33 percent of high school seniors can fully comprehend front-page and editorial material in newspapers... 36 percent of our public school students are doing primary lessons in Title 1 or Special Education remedial classes, 70 percent of our high school students can't read 9th grade assignments [and] 30 percent of our 12th graders can't read 4th grade lessons...50 percent of U.S. citizens are effectively disenfranchised because they can't read ballot propositions or explanations of the." Illteracy not only affects the individual but affects society as whole. An estimated 85 percent of juvenile offenders have reading problems, about 70 percent of the adult prison population is functionally illiterate, an estimated 75 percent of unemployed people are functionally illiterate, and 80 percent of the non-reading United States population live below the poverty level (Literacy Volunteers of Maricopa County, 2004). Moreover, "Seventy-nine percent of adults on welfare are illiterate" (Brown 1995). The Literacy Counsel of Northeast Florida (2002) also reports the correlation between welfare payments and illiteracy. They report that, "Almost 50% of adults on welfare do not have a high school diploma or a GED."
Why are so many children failing acquire adequate reading skills and what could we in our community do about it? Countless factors contribute to the illiteracy in the U.S. such as learning disabilities, poverty and dysfunctional families. One additional reason why illiteracy is a problem is because reading is not a focus of instruction in middle school. Siljander, Reina and Siljander reported that "Most reading instruction stops entirely after fifth grade." (id p.6) This creates a problem when in most primary schools attendance alone will often suffice for a child to be promoted to the next grade level. Consequently, when the child advances to middle school he or she is given material that is beyond his or her reading level and the illiteracy problem continues.

My objective is to provide a tutoring program that teaches children, adolescence, and adults how to read. I own residential property in Milwaukee, and I would like to open my home and use it as a learning center. The plan is to provide computers and seek tutors who will volunteer their time and teach in person as well as via web cameras. Potential tutors will not be required to have any degrees of higher education, just the desire to help others. I am confident that there are many caring teachers who have expertise in reading instruction who will volunteer their time and train tutors. The foundation of the program would be people devoting their time. I encourage everyone who wants to make a difference in someone's life to devote their time and open their hearts, homes churches, offices, etc. to provide literacy tutoring. The gesture can bring humongous change.

When I was 18 years old, I was convicted of two armed robberies, aggravated battery, and substantial battery and sentenced to 54 years in prison.
I turned to crime because, like so many other youths in my community I had the thought of coming up
I was kicked out of school at 18 because of poor attendance. I did not attend school because drugs affected my family and I did not have the cloths or the mental fortitude. It was hard for me to concentrate or comprehend what I read because there was so much going on in my life.
My oldest sister began using drugs and my nieces and nephews often did not have food, diapers, or a place to sleep. I felt responsible and became depressed because I felt that I had to do something but there was nothing I could do. I worked as a telemarketer but was fired after a dispute regarding my pay. Every day my focuses were on how I can obtain money to survive and help my family. I began drinking and smoking marijuana to escape the poverty.
During one of my intoxicated states, my nephew and I robbed a liquor store; and not realizing how serious the offense was, we went back to the store a week later contemplating robbing it again, but the guy pulled a gun. I struck the guy with several bottles to disarm him. We got the gun then ran The guy was an elderly man, 65 years old, and he received over 200 stitches. I immediately regretted what I did because I had no intentions of hurting anyone.
I committed those crimes and others because at the time I believe there was no other way. I couldn't see myself working some minimum wage job for the rest of my life. I had no hopes for college. My mother was illiterate and her only expectation of me was that I graduate from high school. But graduating from high school was not my top priority because "then what?" I did not believe that I was smart enough for college. Besides, how would I pay tuition? My grades did not warrant any scholarships, and I had no one encouraging me to improve my grades. My role models encouraged me to sell drugs and try to get rich. Prison was just a chance I had to take.
I had brothers, cousins, and nephews who went to prison and survived, so i felt that i could survive to. I would get out swill and become self educated like Malcolm.
I arrived at the prison in April of 1996. In 1997, I obtained my H.S.E.D. I then participated in vocational welding, cabinet making, and office assistant. It seemed unbelievable to me how many inmates were unable to read or write. The correlation between illiteracy and recidivism was apparent. I can't count the inmates whom I've seen released only to return. Sometimes their freedom was so short lived that I did not even know that they had been released. Most prisoners have good intentions when they are released, but if a person does not have the skills or knowledge to earn a decent living resorting to crime is inevitable. To me the simple and logical way to reduce crime is to increase literacy.
I began tutoring in an ESL class within the prison in 2004. Initially I took the job simply to past time, but the teacher had an impact on me. She instilled confidence by distinguishing the difference between intelligence and academic success. She, in fact, rebelled against the traditional methods of teaching and encouraged that we first learn our strength then build upon them. She emphasized that learning is about making connections with our prior knowledge and most importantly learning is about RESPECT.
It was hard for me to feel respected in a classroom setting when I felt I was the only person who didn't understand the curriculum. When I was kicked out of school, I lost all hope and I turned to crime. I don't want to see anyone else follow in my footsteps. If I can prevent even just one child from making the same mistakes that Ive made, I would feel that Ive accomplished a purpose. So, I hope that by writing this I can encourage others to get involved. I can be contacted at:

Hello Mr. Gilmore,
I am curious if this post is still active. If is is could you please respond to this email?
Thank you,
Candy Kennedy
hi Good writer Cory,

I read your writing and was really interested in what you have to tell!
I am an elderly person as you would call it, but inside I feel very young and energetic at 67 yrs (old?).
I am also very active in many areas, such as doing yoga, bicycling, swimming, reading books, writing, painting (moreso in the psst), playing the piano, learning yet another new language:Italian, babysitting at my grandchildren, and so much more!
I guess I've a young spirit. ;)
Since many yrs already I write with American inmates, pen pals.
As a couple (I'm divorced now, but my ex and me are still befriended)and lived 7 yrs in the States: 3 in Utah and 4 in Ohio.
later on as a couple we lived almost 6yrs in Argentina(Buenos Aires).
We have two daughters.One was born in Utah and they later studied in American schools in Ohio.
Our yooungest Am.girl moved to CA,San Diego to do some studies(him) and now they deceided to stay there.They have two kids.
The other daughter, expects a second child for the 28th of January!

My purpose to be here, is to know about your current year, Cory?
Tell me more about your goals and all what you do as activities, please? :)

I surely hope to hear from you!

happy 2016 and my wishes for a lot of inspiration, friendship, warmth and inner peace.

kind greeings from Rita
Hello Corey . I read your blog posts and have really liked them. My name is Alyssa and I am asking a few people on the betweenthebars.org blogs some questions for my own research and was wondering if you would answer them if you felt like it. What are ways that some men deal with missing women in prison? Do you think men change not being around women? If so in what ways? How do you think this affects them when they are released? How do men deal with their "needs"? Do you think men become more reserved or dont know how to deal with a womens "touch" when released? ;) I just want to hear your input on this out of curiosity. Speak your mind. You don’t have to hold back. Nothing will offend me. Haha. I would love to maybe see a blog post about this too. Thank you. Hope to hear back soon:)

I would love to see you post more blogs often as well!


I also see your address has changed since the last time you have posted. Hopefully between the bars will send it to this address.