Reply ✍ Transcribed
From The Untold Story's of Prison Life!, And Beyond, Life Goes On! by Mark Garcia (author's profile)
Share this:
uploaded April 25, 2011.  Original (PDF) 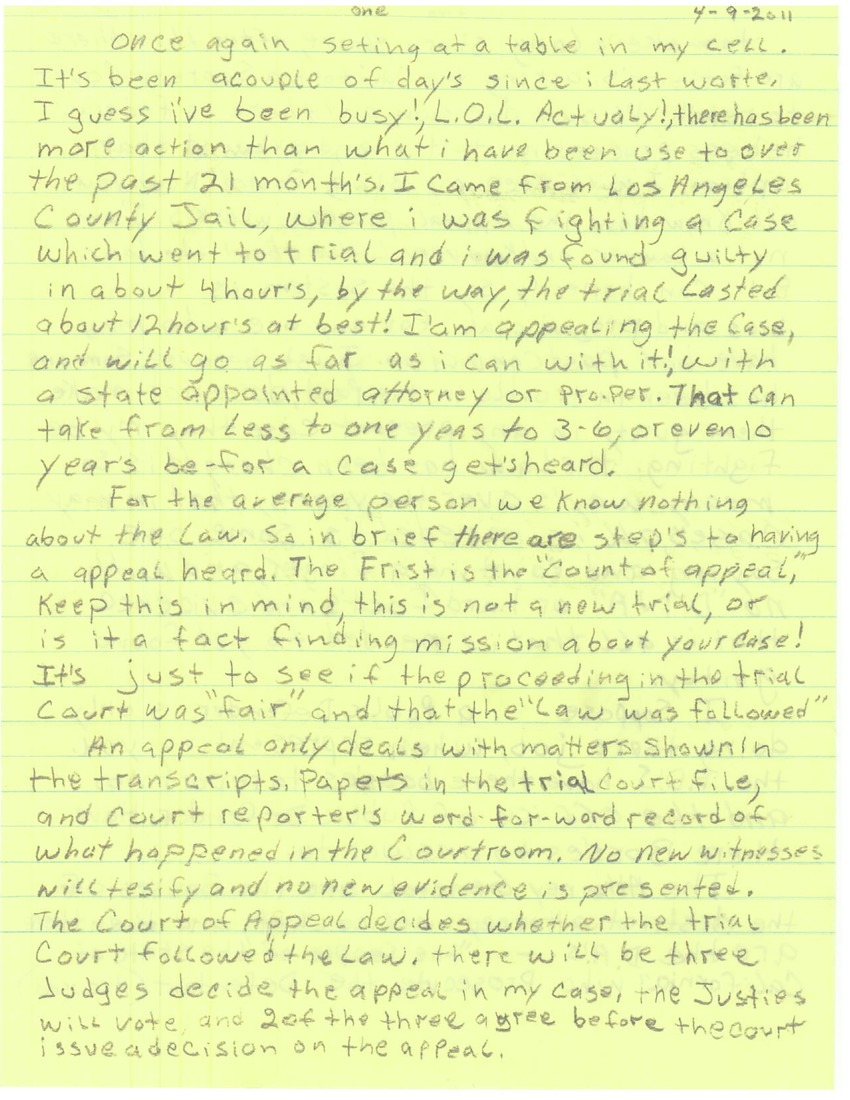 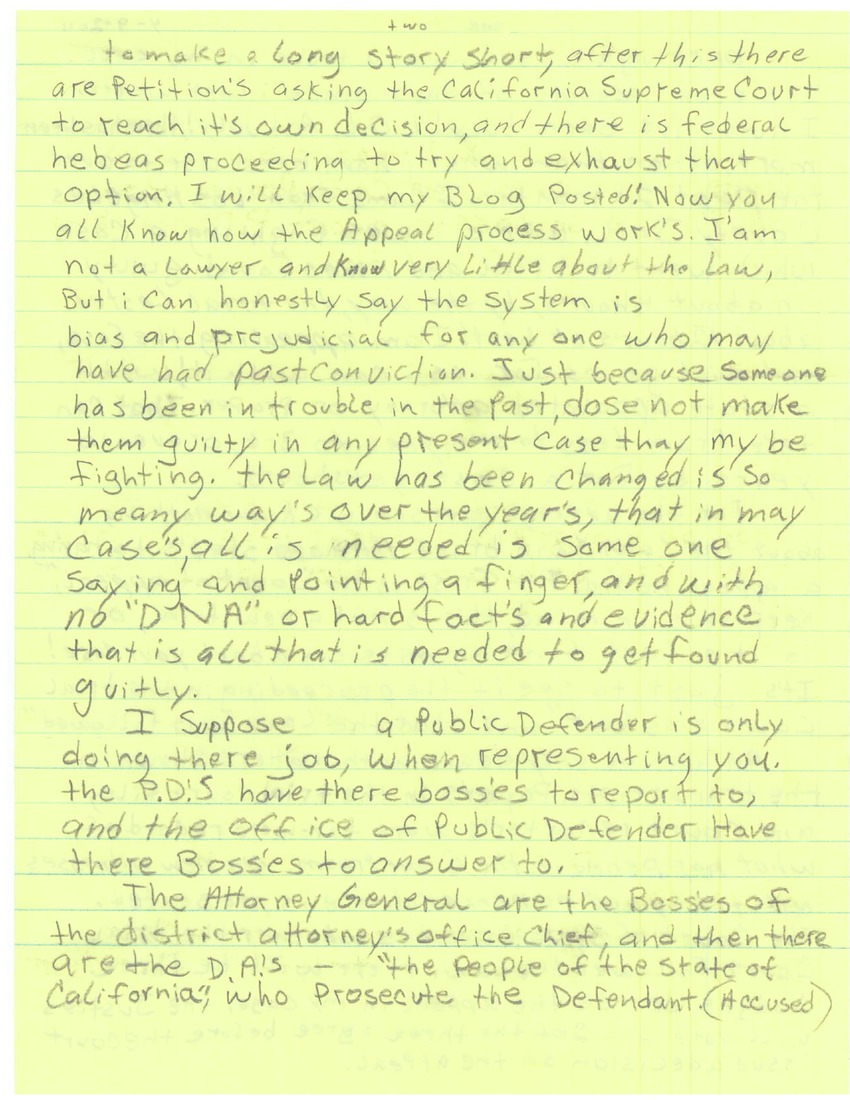 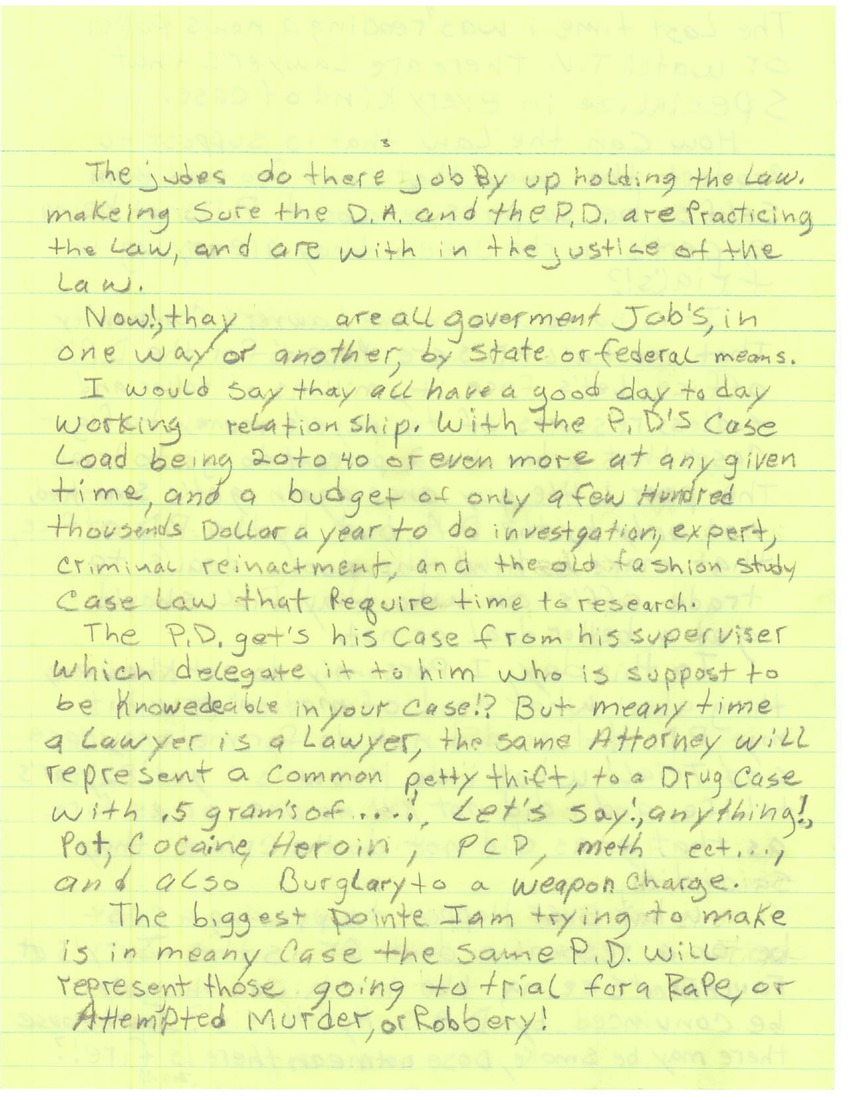 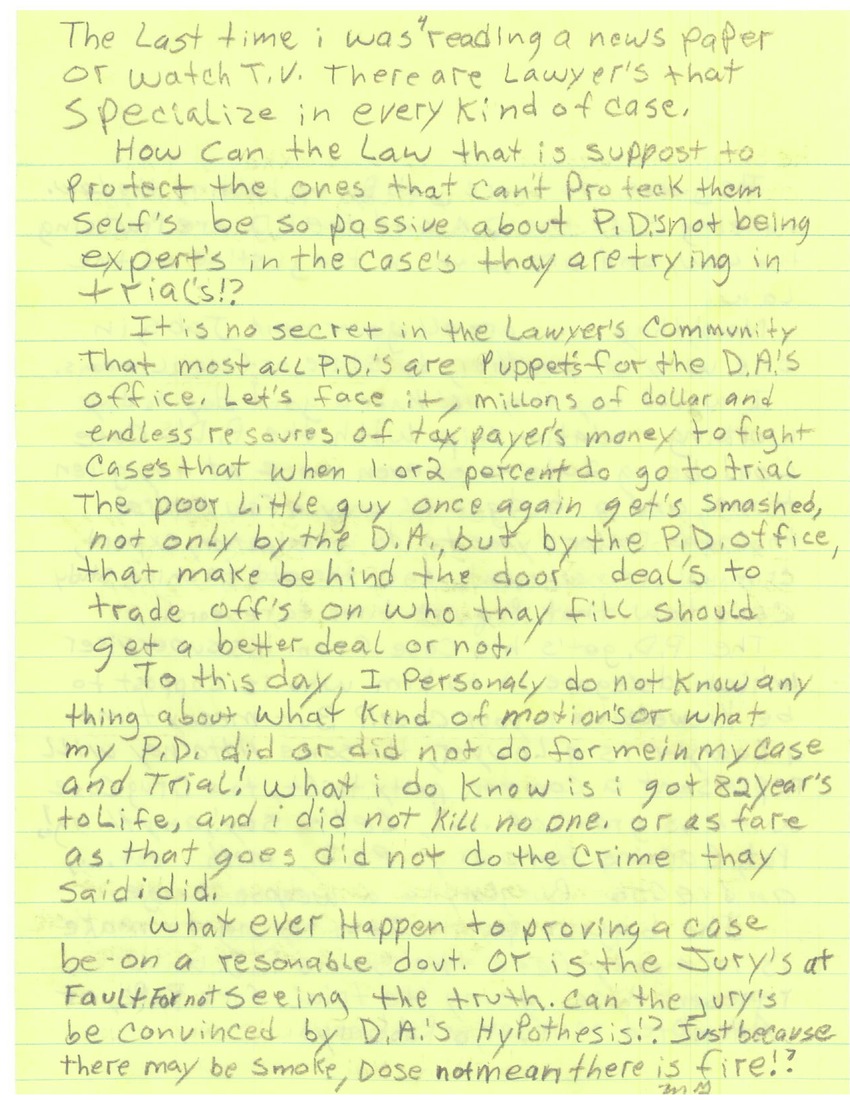 Once again sitting at a table in my cell. It's been a couple of days since: last wrote, I guess I've been busy!, L.O.L. Actually! there has been more active than what I have been used to love the past 21 months. I came from Los Angeles County Jail, where I was fighting a case that went to trial and I was found guilty in about 4 hours, by the way, the trial lasted about 12 hours at best! I am appealing the case, and will go as far as I can with it! With a state-appointed attorney or proper. That can take from less to one year to 3-6, or even 10 years before a case gets heard.
For the average person, we know nothing about the law. So in brief there are steps to having an appeal heard. The first is the "court of appeal," keep this in mind, this is not a new trial, is it a fact-finding mission about your case! It's just to see if the proceeding in the trial court was "fair" and that the "law was followed"
An appeal only deals with matters shown in the transcripts, papers in the trial, court files, and court reporter's word-for-word record of what happened in the courtroom. No new witnesses will testify and no new evidence is presented. The Court of Appeal decides whether the trial court followed the law. There will be three judges decide the appeal in my case, the justices will vote, and 2 of the three agree before the court issue a decision on the appeal.
To make a long story short, after this there are petitions asking the California Supreme Court to reach its own decision, and there is federal habeas proceeding to try and exhaust that option. I will keep my blog post! Now you all know how the appeal process works. I am not a lawyer and know very little about the law, but I can honestly say the system is bias and prejudicial for anyone who may have had a past conviction. Just because someone has been in trouble in the past, does not make them guilty in any present case they may be fighting. The law has been changed in so many ways over the years, that in many cases, all is needed is someone saying and pointing a finger, and with doing "DNA" or hard facts and evidence that is all that is needed to get found guilty.
I suppose a public defender is only doing their job, when representing you. The P.D.s have their bosses to report to, and the office of Public Defender has their bosses to answer to.
The Attorney General are the bosses of the district attorney's office chief, and then there are the D.A.'s - "the people of the state of California," who prosecute the Defendant. (accused)
The judges do their job by upholding the law, making sure the D.A. and the P.D. are practicing the law, and are within the justice of the law.
Now! They are all government jobs, in one way or another, by state or federal means. I would say they all have a good day-to-day working relationship. With the P.D.'s caseload being 20 to 40 or even more at any given time, and a budget of only a few hundred thousand dollars a year to do investigation, expert, criminal reenactment, and the old-fashioned study case law that requires time to research.
The P.D. gets his case from his supervisor which delegates it to him who is supposed to be knowledgeable in your case!? But many times a lawyer is a lawyer, the same attorney will represent a common petty thrift, to a drug case with .5 grams of ...! Let's say! anything! Pot, cocaine, heroin, PCD, meth, etc..., and also burglary to a weapon charge.
The biggest point I am trying to make is in many cases the same P.D. will represent those going to trial for a rape, or attempted murder, or robbery!
The last time I was reading a newspaper or watching T.V. There are lawyers that specialize in every kind of case.
How can the law that is supposed to protect the ones that can't protect themselves be so passive about P.D.s not being experts in the cases they are trying in trials!?
It is no secret in the lawyer community that most all P.D.s are puppets for the D.A.'s office. Let's face it, millions of dollars and endless resources of tax payer's money to fight cases that when 1 or 2 percent do go to trial the poor little guy once again gets smashed, not only by the D.A., but by the P.D. office, that make behind the door deals to trade-offs on who they fill should get a better deal or not.
To this day, I personally do not know anything about what kind of motions or what my P.D. did or did not do for me in my case and trial! What I do know is I got 82 years to life, and I did not kill no one, or as far as that goes did not do the crime they said I did.
Whatever happened to prove a case beyond a reasonable doubt. Or is the jury at fault for not seeing the truth. Can the jury be convinced by D.A.'s hypothesis!? Just because there may be smoke, does not mean there is fire!?