Part two: "In a Land Far Away" 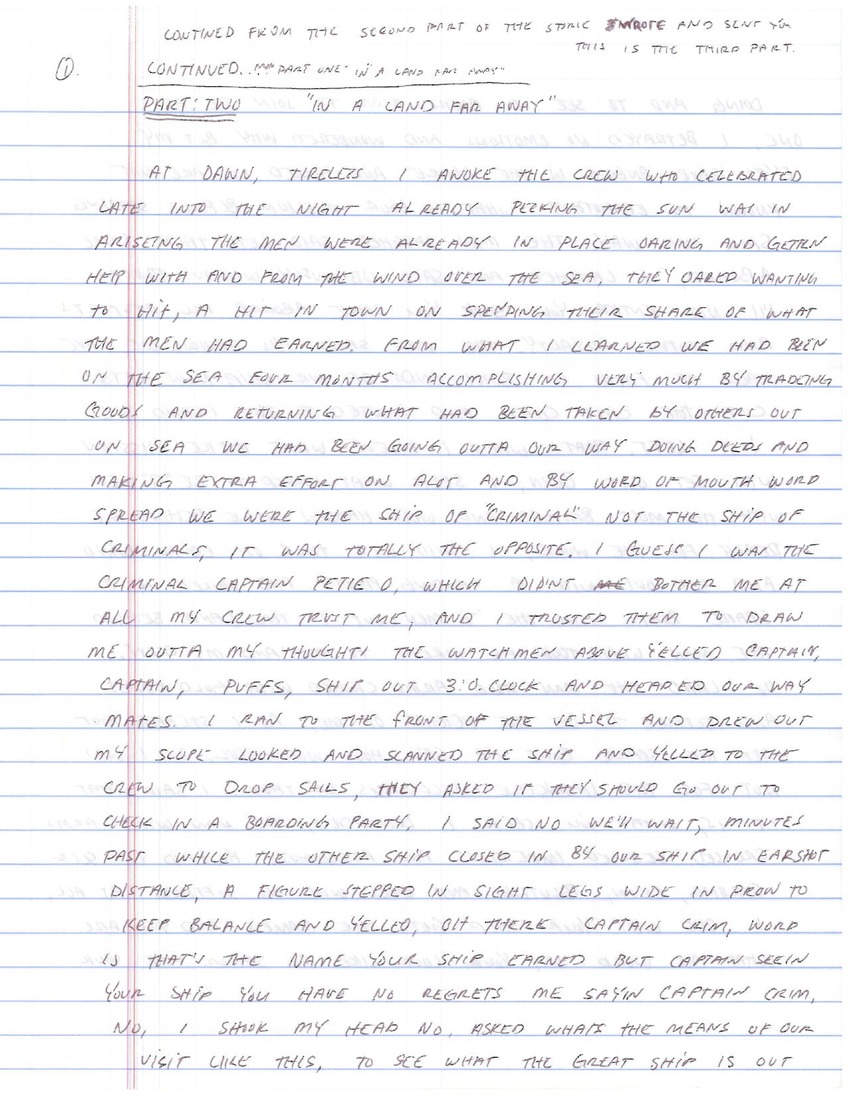 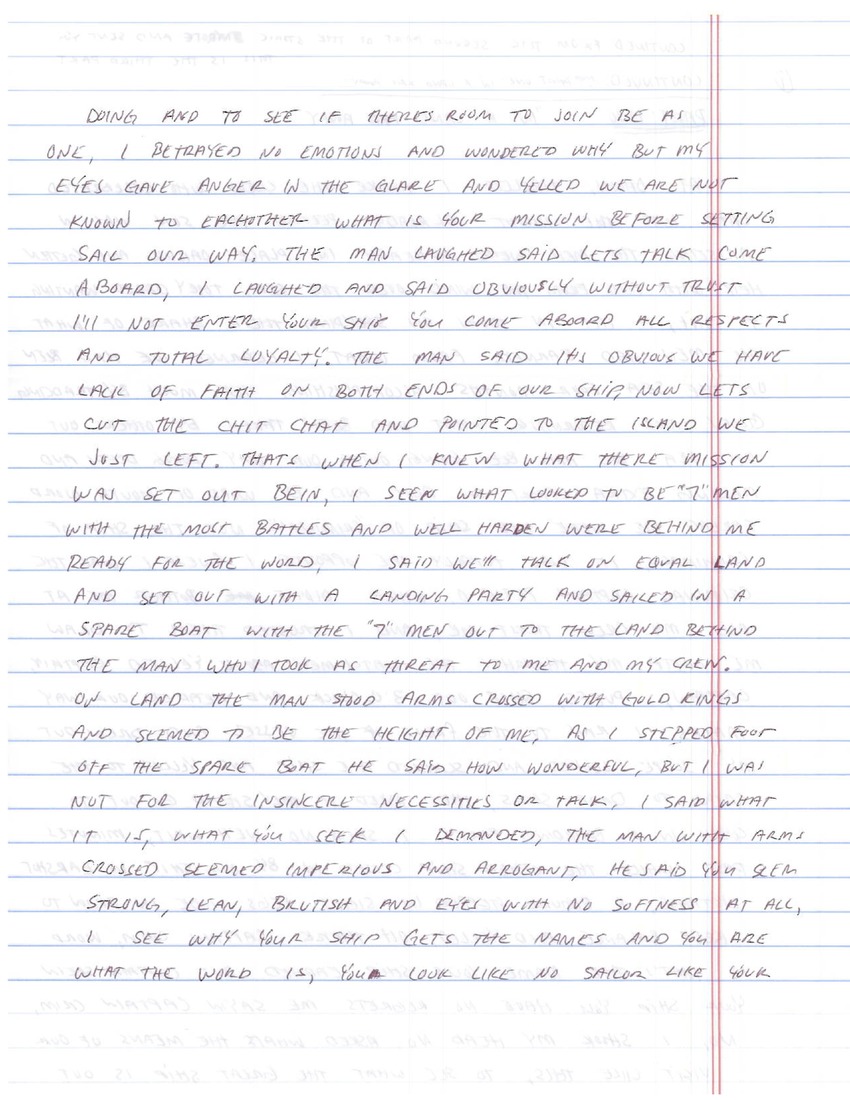 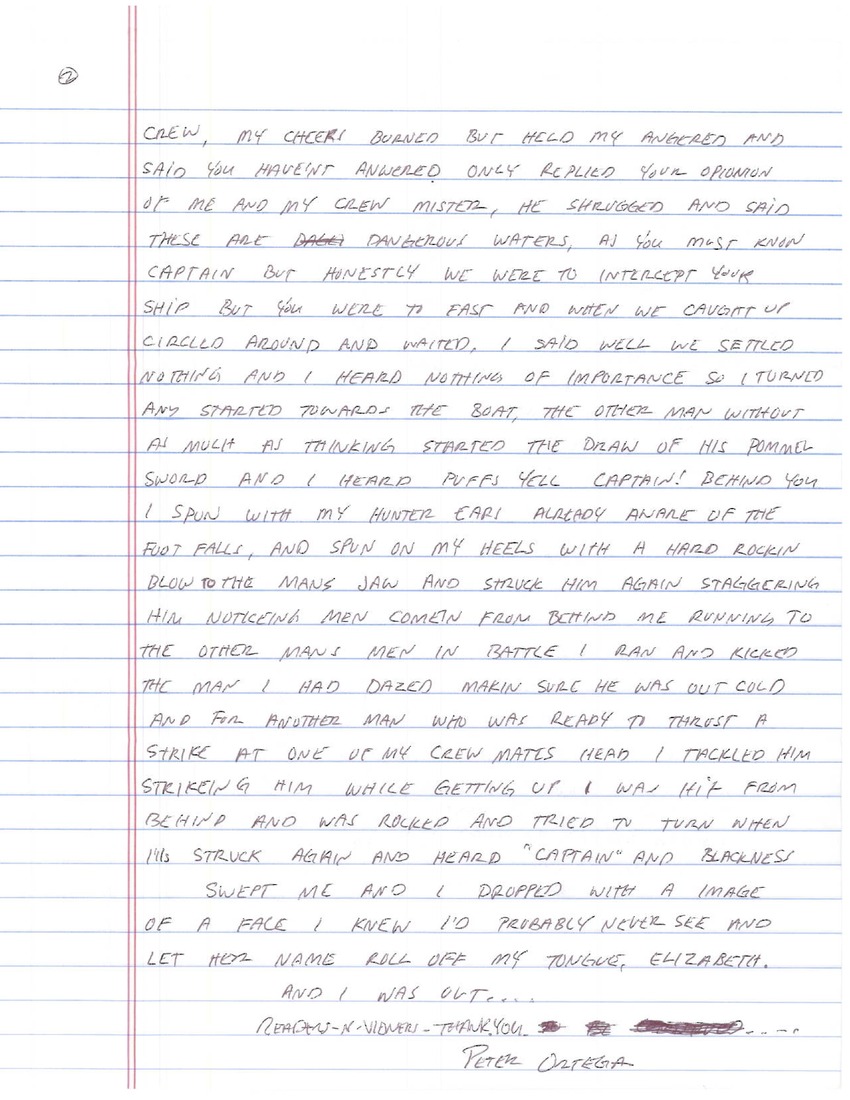 Continued from the second part of the story I wrote and sent in
this is the third part.
Continued... part one "In a Land Far Away"

PART: TWO "In a Land Far Away"

At dawn, tireless I awoke the crew who celebrated late into the night already peeking the sun way in arising the men were already in place oaring and getting help with and from the wind over the sea, they oared wanting to hit, a hit in town on spending their share of what the men had earned. From what I learned we had been on the sea four months accomplishing very much by trading goods and returning what had been taken by others out on sea we had been going outta our way doing deeds and baking extra effort on a lot and by word of mouth word spread we were the ship of "criminal" not the ship of criminals, it was totally the opposite. I guess I was the criminal captain Petie D, which didn't bother me at all my crew trust me, and I trusted them to draw me outta my thought the watchmen above yelled captain, captain, puffs, ship out 3'o'clock and headed our way mates. I ran to the front of the vessel and drew out my scope looked and scanned the ship and yelled to the crew to drop sails, they asked if they should go out to check in a boarding party. I said no we'll wait, minutes past while the other ship closed in by our ship in earshot distance, a figure stepped in sight legs wide in prow to keep balance and yelled, out there captain crim, word is that's the name your ship earned but captain seeing your ship you have no regrets me saying captain crim. No, I shook my head no. Asked whats the means of our visit like this, to see what the great ship is out doing and to see if there's room to join be at one, I betrayed no emotions and wondered why buy my eyes gave anger in the glare and yelled we are not known to each other what is your mission before setting sail our way. The man laughed said let's talk come aboard, I laughed and said obviously without trust I'll not enter your ship you come aboard all respects and total loyalty. The man said it's obvious we have lack of faith on both ends of ur ship, not lets cut the chit chat and pointed to the island we just left. That's when I knew what their mission was set out bein, I seen what looked to be "7" men with he most battles and well harden were behind me ready for the word. I said we'll talk on equal land and see out with a landing party and saliled in a spare boat with the "7" men out to the land behind the man who I took a threat to me and my crew. On land the man stood arms crossed with gold kings and seemed to be the height of me. As I stepped foot off the spare boat he said how wonderful, but I was not for the insincere necessities or talk, I said what it is, what you seek I remanded, the man with arms crossed seemed imperious and arrogant. He said you seem strong, lean, brutish and eyes with no softness at all, I see why your ship gets the names and you are what the world is. You look like no sailor like your crew. My cheek burned but held my angered and said you haven't answered only replied your opinion of me and my crew mister, he shrugged and said these are dangerous waters, and you must know captain but honestly we were to intercept your ship but you were to east and when we caught up circled around and waited, I said well we settled nothing and I heard nothing of importance so I turned and started towards the boat. The other man without as much as thinking started the draw of his pommel sword and I head Puffs yell Captain! Behind you I spun with my Hunter Earl already aware of the foot falls, and spun on my heels with a hard rocking blow to the mans jaw and struck him again staggering him noticing men come in from behind me running to the other man's men in battle I ran and kicked the man I had dazed making sure he was to could and for another man who was ready to thrust a strike at one of my crewmates head I tackled him striking him while getting up I was hit from behind and was rocked and tried to turn when I was struck again and heard "Captain" and blackness swept me and I dropped with an image of a face I knew I'd probably never see and let her name roll off my tongue, Elizabeth.
And I was out...
Readers-N-Viewers -Thank you.
Peter Ortega