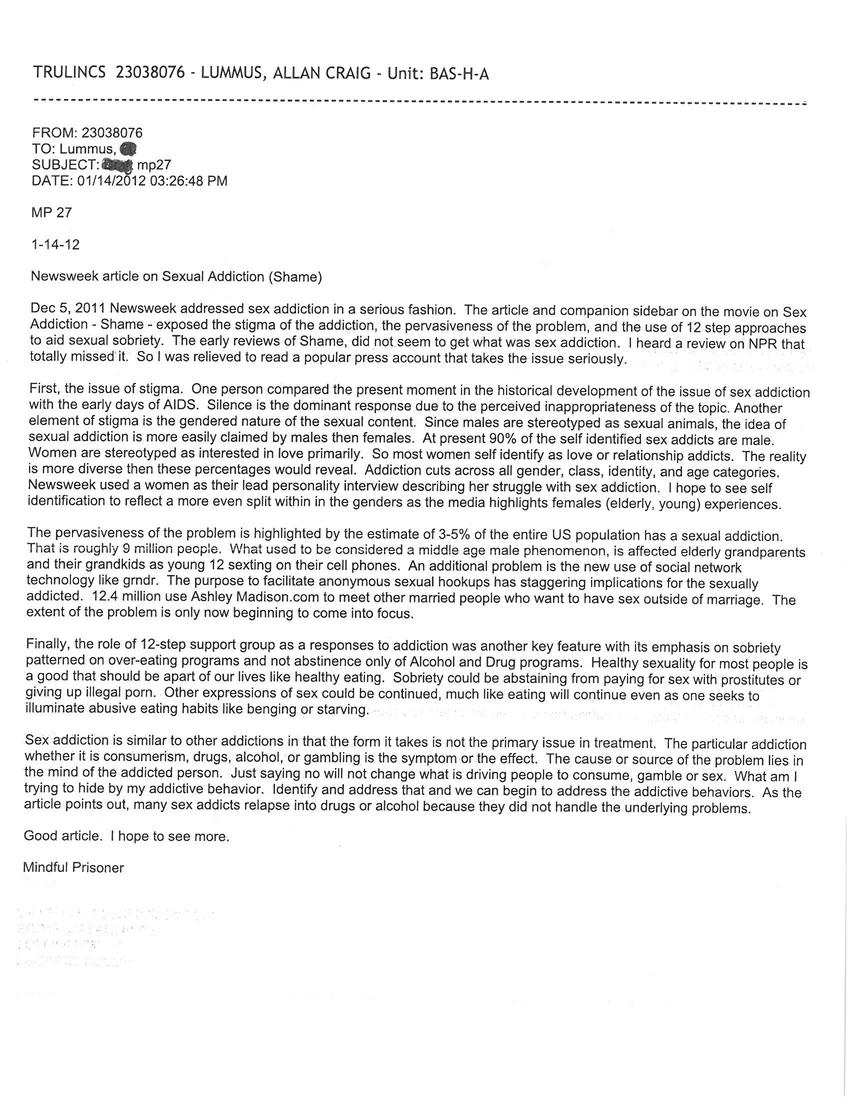 Dec 5, 2011 Newswek addressed sex addiction in a serious fashion. The article and companion sidebar on the move on Sex Addiction - Shame- exposed the stigma of the addiction, the pervasiveness of the problem, and the use of the 12-step approaches to aid sexual sobriety. The early reviews of Shame did not seem to get what was sex addiction. I heard a review on NPR that totally missed it. So I was relieved to read a popular press account that takes the issue seriously.

First, the issue of stigma. One person compared the present moment in the historical development of the issue of sex addiction with the early days of AIDS. Silence is the dominant response due to the perceived inappropriateness of the topic. Another element of stigma is the gendered nature of the sexual content. Since males are stereotyped as sexual animals, the idea of sexual addiction is more easily claimed by males then females. At present 90% of the self-identified sex addicts are male. Women are stereotyped as interested in love primarily. So most women self-identify as love or relationship addicts. The reality is more diverse then these percentages would reveal. Addiction cuts across all gender, class, identify, and age categories. Newsweek used a women as their lead personality interview describing her struggle with sex addiction. I hope to see self-identification to reflect a more even split within in the genders as the media highlights females (elderly, young) experiences.

The pervasiveness of the problem is highlighted by the estimate of 3-5% of the entire US population has a sexual addiction. That is roughly 9 million people. What used to be considered a middle age male phenomenon is affected elderly grandparents and their grandkids as young 12 sexting on their cellphones. An additional problem is the new use of social network technology like grndr. The purpose to facilitate anonymous sexual hookups has staggering implications for the sexually addicted. 12.4 million use Ashley Madison.com to meet other married people who want to have sex outside of marriage. The extent of the problem is only now beginning to come into focus.

Sex addiction is similar to other addictions in that the form it takes is not the primary issue in treatment. The particular addition whether it is consumerism, drugs, alcohol, or gambling is the symptom or the effect. The cause or source of the problem lies in the mind of the addicted person. Just saying no will not change what is driving people to consume, gamble, or have sex. What am I trying to hide by my addictive behavior. Identify and address that, and we can begin to address the addictive behaviors. As the article points out, many sex addicts relapse into drugs or alcohol because they did not handle the underlying problems.