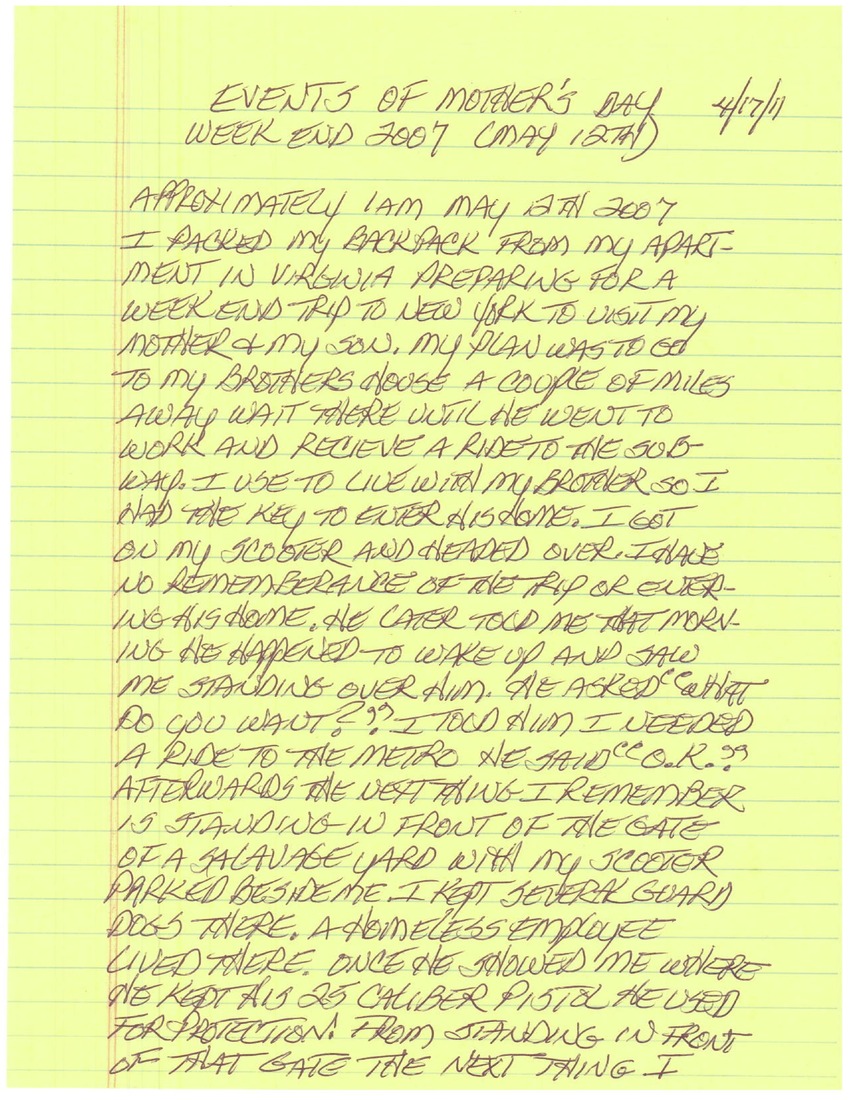 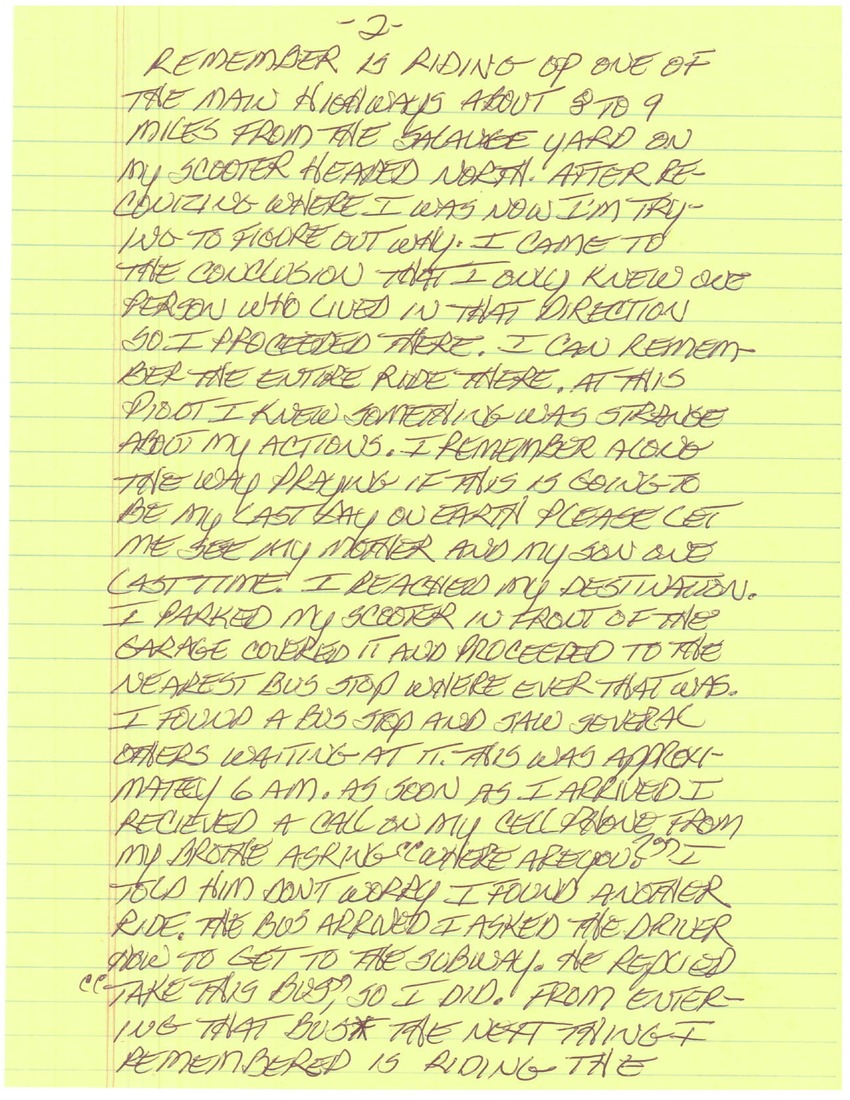 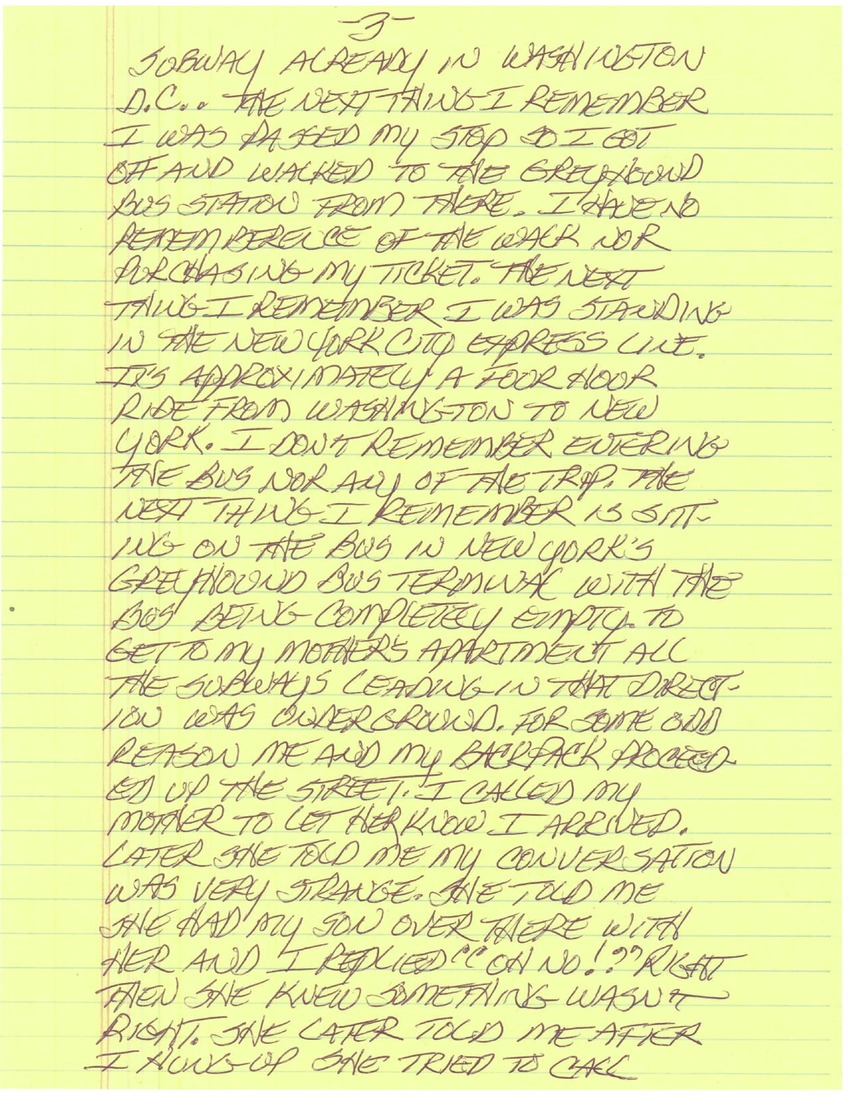 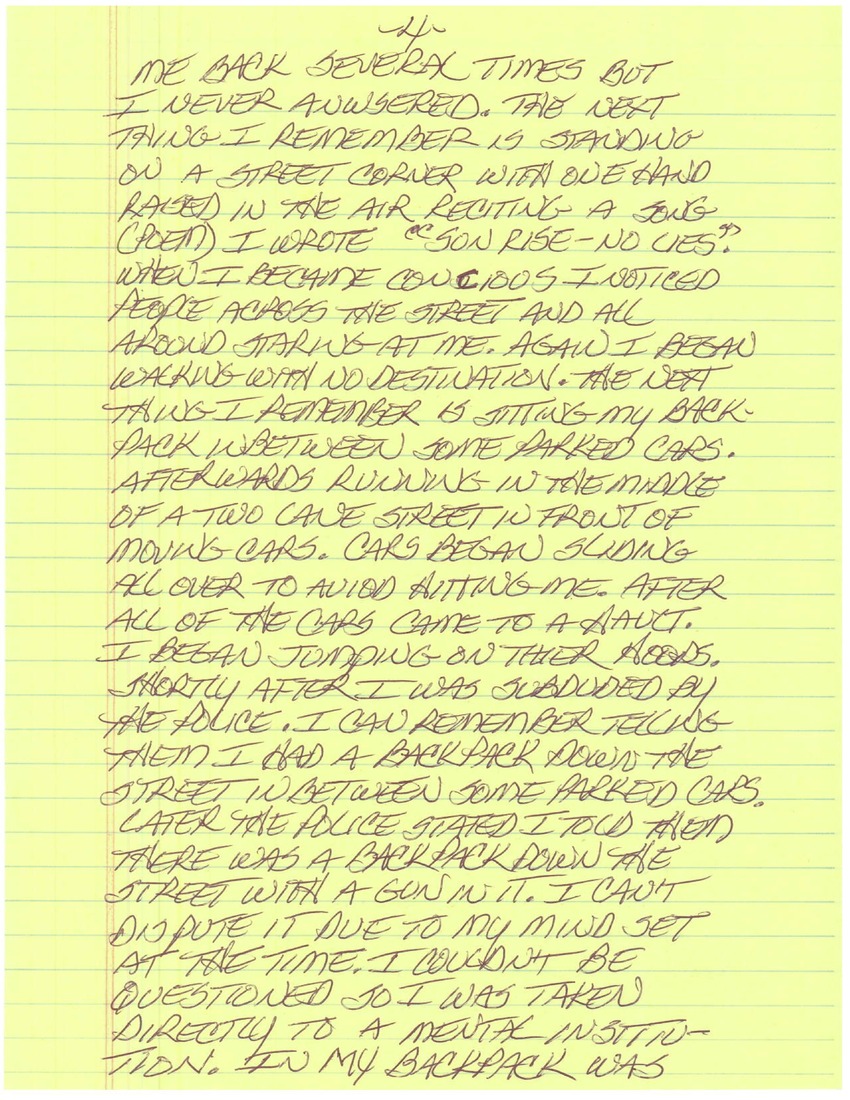 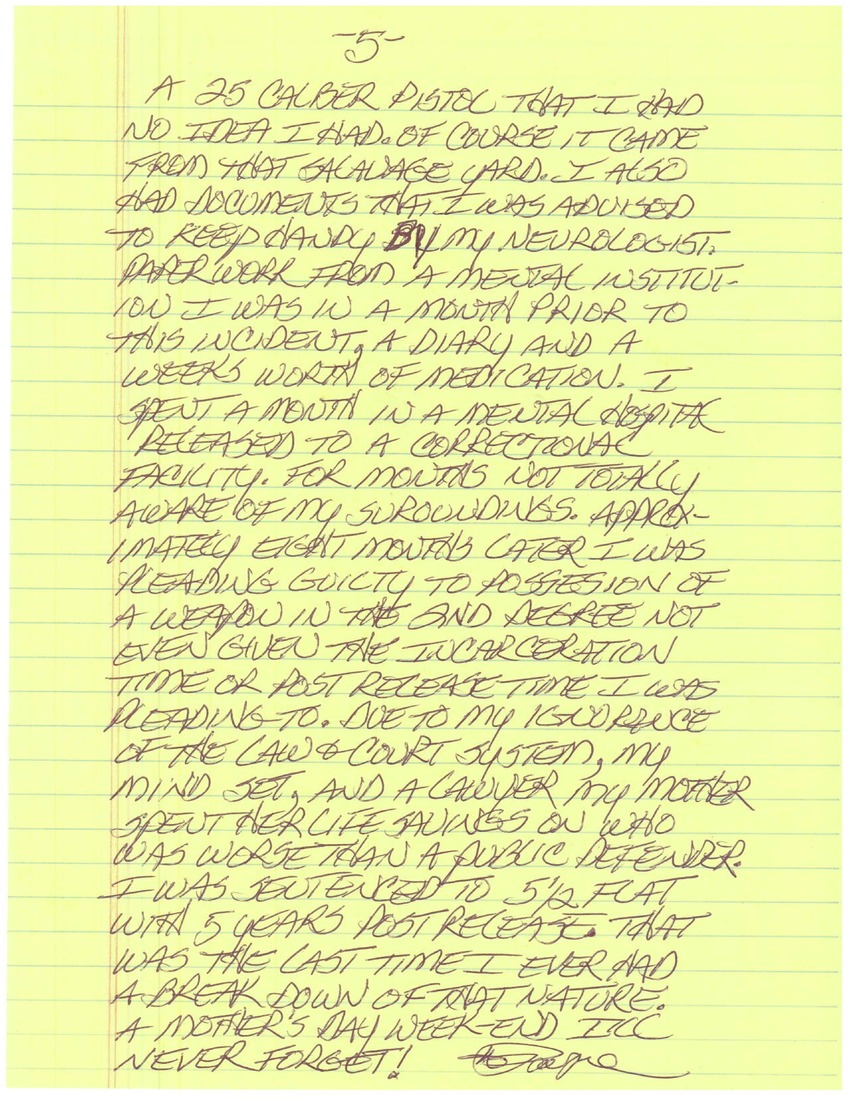 Approximately 1 AM May 12th 2007 I packed my backpack from my apartment in Virginia preparing for a weekend trip to New York to visit my mother & my son. My plan was to get to my brothers house a couple of miles away wait there until he went to work and receive a ride to the so B-Way. I use to live with my brother so I had the key to enter his home. I got on my scooter and headed over. I have no remembrance of the trip or entering his home. He later told me that morning he happened to wake up and saw me standing over him. He asked "what do you want?" I told him I needed a ride to the metro he sai "O.K." Afterwards the next thing I remember is standing in front of the gate of a salvage yard with my scooter parked beside me I kept several guard dogs there. A homeless employee lived there. Once he showed me where he kept all 25 caliber pistol he used for protection! From standing in front of that gate the next thing I remember is riding up one of the main highways about 8 to 9 miles from the salvage yard on my scooter headed north. After realizing where I was now I'm trying to figure out why. I came to the conclusion that I only knew one person who lived in that direction so I proceeded there. I can remember the entire ride there. At this point I knew something was strange about my actions. I remember along the way praying if this is going to be my last day on earth please let me see my mother and my son one last time. I reached my destination. I parked my scooter in front of the garage covered it and proceeded to the nearest bus stop where ever that was. I found a bus stop and saw several others waiting at it. This was approximately 6 AM. As soon as I arrived I received a call on my cellphone from my brother asking "Where are you?" I told him don't worry I found another ride. The bus arrived I asked the driver how to get to the subway. He replied "Take this bus," so I did. From entering that bus* the next thing I remembered is riding the subway already in Washington D.C. The next thing I remember I was passed my stop so I got off and walked to the Greyhound bus station from there. I have no remembrance of the walk nor purchasing my ticket. The next thing I remember I was standing in the New York City Express line. It's approximately a four hour ride from Washington to New York. I don't remember entering the bus nor any of the trip. The next thing I remember is getting on the bus in New York's Greyhound bus terminal with the bus being completely empty. To get to my mother's apartment all the subways leading in the direction was underground. For some odd reason me and my backpack proceeded up the street. I called my mother to let her know I arrived. Later she told me my conversation was very strange. She told me she had my son over there with her and I replied "Oh no!" Right then she knew something wasn't right. She later told me after I hung up she tried to call me back several times but I never answered. The next thing I remember is standing on a street corner with one hand raised in the air reciting a song (poem) I wrote "Son Rise-No Lies." when I became conscious I noticed people across the street and all around staring at me. Again I began walking with no destination. The next thing I remember is sitting my backpack between some parked cars. Afterwards running in the middle of a two lane street in front of moving cars. Cars began sliding all over tp avoid hitting me. After all of the cars came to a hault. I began jumping on their hoods. Shortly after I was subdued by the police. I can remember telling them I had a backpack down the street in between some parked cars. Later the police stated I told them there was a backpack down the street with a gun in it. I can't dispute it due to my mindset at the time. I couldn't be questioned so I was taken directly to a mental institution. In my backpack was a 25 caliber pistol that I had no idea I had. Of course it came from that salvage yard. I also had documents that I was advised to keep handy by my neurologist, paperwork from a mental institution I was in a month prior to this incident, a diary and a weeks worth of medication. I spent a month in a mental hospital released to a correctional facility. For months not totally aware of my surroundings. Approximately eight months later I was pleading guilty to a possession of a weapon in the 2nd degree not even given the incarceration time or post release time I was pleading to. Due to my ignorance of the law & court system, my mind set, and a lawyer my mother spent her life savings on who was worse than a public defender. I was sentenced to 5 1/2 flat with 5 years post release. That was the last time I ever had a breakdown of that nature. A mother's day weekend Ill never forget!

Hey Dad,
Grandma and I are reading your messages & poems. We would like to commend you on your creativity and style. Keep up the good work